Home Writing Fiction Out of the Hatch 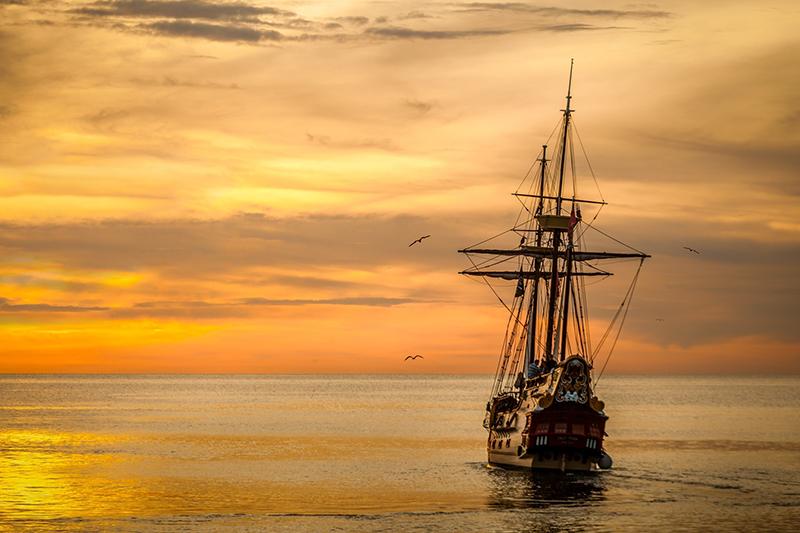 When it rained, you felt it from all sides. The persistent pitter-patter of droplets on the hatch and the soft push and pull of the water beneath the hull. The room was a cocoon of sorts, tethered to the rest of the world by a few fraying ropes.

On this particular evening, the rain drizzled gloomily down the sides of the hull. The girl cringed as a familiar pang of lonely teen romanticism echoed off the triangular walls of her cabin and came to rest stubbornly in the center of her chest. It was then, pen poised over the pages of a particularly dramatic diary entry, that the thought of peeking out during the magic hour first occurred to her. If she could only escape into the night, surely, someone would be waiting for her in the raindrop-blurred spotlight at the end of the dock.

There was a hatch directly above the bed, the bolts not hard to loosen. The girl stood on her bunk and twisted the two knobs to the left. The hatch caught for a moment, trapping her heart in her throat. But it was only a small glitch, a patch of rusted metal that needed a little push. Now came the tricky part, and the girl quickly realized that the escape would take much more upper-body strength than she had initially predicted. After a few failed attempts, she was able to pull herself out up to her waist, bend forward, and wriggle the rest of the way out. It was a tad more painful and far less graceful than the girl intended. But she was free.

Careful to duck out of view of the front windows, the girl crouched for a moment on the deck, eyes fixed expectantly on the dock. She felt exhilarated and, at the same time, she felt … damp. She began to shiver in her thin, patterned pajamas. For one fantastical moment she let herself believe that she would lean into the unknown, that she would stay on the deck to embrace her one chance at moonlit romance. It was an innocent and indulgent thought, but she scarcely had time to think it before scrambling back to the hatch and cannonballing onto the bunk below. Her bunk. Her room. The dry air from the space heater suddenly tasted sweet in its stifling familiarity. The girl took several hungry gulps of inside air and then slowly, very slowly, eased the hatch open just enough to peer out.

And there she was. A woman, shadowy and gaunt in complexion, gliding toward the girl. The girl blinked, and the woman continued past her. Had she seen this woman before? Which boat was hers? But the woman did not stop, did not turn to board a boat. She just kept walking, right off the edge of the dock. The girl’s muscles tensed, bracing for a splash or a scream. But none came.

In the eerie silence that followed, the girl found herself gripping the edge of the hatch once more and hoisting herself back onto the deck. She found herself tumbling to the dock below and walking the path the woman had taken moments before. She reached the end of the dock and stared out into the water beyond. She stood there for a long time, watching the dark expanse ripple and blur into a watercolor of refracted light, her bare feet cold and stinging against the roughness of the dock.

It was then that she noticed it: a slight mismatch in the reflection of the moon. A pool of light, cool as crystal, shimmering slightly off-center from the source of its radiance.

The girl did not stop to think. She ran back to her father’s slip and soundlessly untied the kayak from the swim step. The kayak nearly toppled over as she catapulted into the small seat, but the girl barely had time to steady herself before thrusting the paddle into the water with a sudden, fierce conviction.

When she reached the patch of moonlight, the girl slowed to a drift, reaching her hand out to stroke the water’s shimmering surface. The moment her fingers made contact, a web of light shot through her skin and across the dark water, illuminating something in the distance.

Her father had told her about ghost ships, how he and his buddies had come across one during his time in the navy. They’re real, he’d whisper, as he tucked the covers up to her chin. We all saw it. She hadn’t believed him as a child. In fact, she’d fancied herself wise for being able to spot his fib.

But now, unmistakably: the outline of a small ship buzzed with unnatural light on the edge of the horizon. And at its helm stood the woman, glowing with the same blurry iridescence as the vessel she captained. The girl gasped and, in her surprise, lost her balance, toppling into the icy water below. The woman’s face came closer, her arm extending and then …

The girl woke on the dock. Her skin was spongy and damp, but otherwise unharmed. She looked to the water, now calm and unsuspecting, and smiled. On her tongue she tasted saltwater and a secret.