Home Writing The Makara and His Meal
ShareTweet

The makara peered out of the river, letting the sunshine, as warm and yellow as melted ghee, dribble down over his elephantine snout. He’d been here ever since his mistress, the river goddess Ganga, had left with human king Shantanu, who’d begged for her hand in marriage after glimpsing her by the water. She’d whispered to the makara to stay put, that she would return soon.

But without any work to do, he’d grown bored—and hungry. He’d waited in this exact spot for eight years, not even batting at the colorful fish and snapping turtles that passed him by. From their mutterings, he’d put together a tale of a naga dwelling downstream. Nagas, he’d heard, loved a good feast.

Splashing river water like scattered pearls, the makara launched himself forward and swam. Ganga would know how to find him. He was her divine vehicle, after all, transporting her from realm to realm.

How delightful it felt to move at last! The makara’s piscine body propelled him through the sweet waters, his powerful jaw snapping at dragonflies, until he came to a palace on the riverbank. Made of gold and gems, it gleamed and glittered as the inhabitants tussled for morsels from a large silver tray. The makara sniffed a biryani stuffed with sultanas, cashews, and savory bits of chicken. 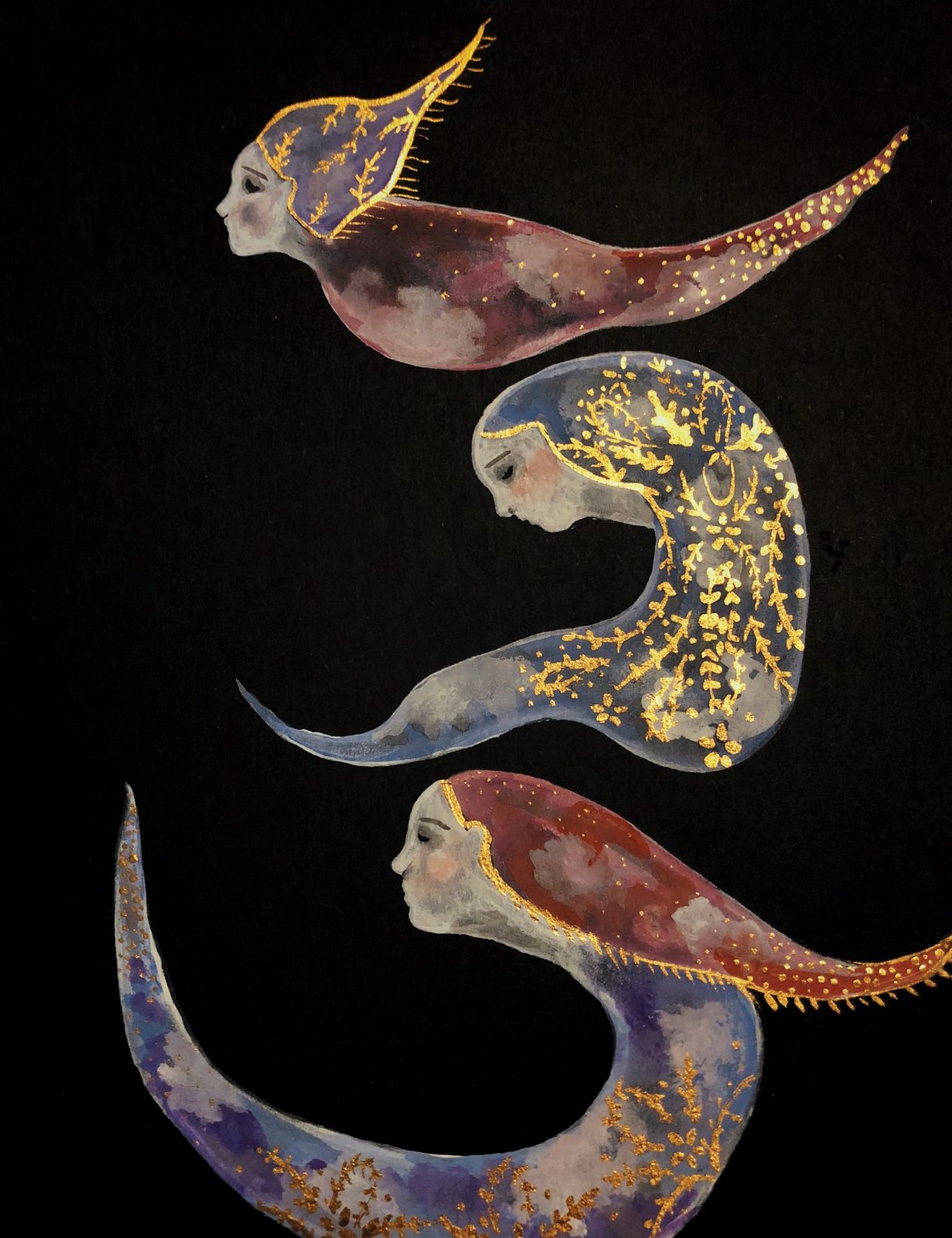 “Hello,” he said to the tray of food, his voice rusted over with disuse. He cleared his throat and tried again, only then noticing the five nagas and naginis staring at him. They sported hair ornaments, earrings, necklaces, bangles, and armbands that sparkled so brightly the makara blinked, dazzled. Their serpentine tails, which ended at their waists, shone with iridescent scales so lovely the makara worried his own peacock tail feathers paled beside them.

Even so, he emerged from the water and opened his tail. It fanned out, indigo eyes winking and green barbs claiming their share of the sunshine. “Mind if I join you? I’m famished.”

“Welcome, makara. Perhaps you could help us settle a debate,” the tallest of the three naginis said, grinning slyly. “My siblings and I can’t decide who would be the best guardian for our family jewel. Help us decide, and we’ll share our food with you.”

“All right,” he agreed, eager to get to the food portion of the bargain. Plus he’d heard of this jewel. It granted wishes. “But I’ll need to see the jewel.”

The younger brother produced the gem, a multifaceted marvel that glowed in all colors, but refused to let anyone close enough to touch it.

Politely pretending not to notice, the makara addressed the tallest nagini. “Tell me, what would you wish for if you had this?”

“Me? I wouldn’t wish for anything. The honor of caring for it would be enough.”

“Aha,” said the makara, bland as unspiced khichdi. He turned to the next in line. “And you?”

“I would wish for peace for all beings.” The naga smiled, sweet enough that it could have flavored any dessert.

“No, you wouldn’t!” cried a second nagini, cobra coils rippling. “You’d wish for pretty maidens to flirt with all day long.”

The makara sighed. With each wasted minute, his poor, empty stomach ached more. “Next?” “I would wish for flowers,” the third nagini said, her tone fluffy as a cloud. “For the whole world to be a garden.”

“That’s a stupid wish!” said the younger brother. “I’d wish to be king of Nagalok! Then I’d get all the gold I could ever want, and pretty handmaidens besides.”

The siblings turned on one another, slapping and scratching.

As the younger brother twisted away, the jewel arced from his grasp to land before the watching makara. The makara’s trunk curled delicately around it, and he beamed. He held all the power of the gods in his hands.

He could have anything, anything at all. And so he made a wish.

A table of delectable treats appeared, which he tucked right into. Only when his belly was full to near bursting did he sit back, satisfied.

By then, the nagas had realized they’d lost their precious jewel. “What if he doesn’t give it back?” one fretted. “No one was supposed to use it except in case of emergency!”

“How could you let him get hold of it, little brother?” another demanded. “He’s already making wishes. You of all people have no business guarding anything.”

“Who cares? We’re going to be in so much trouble if Mother finds out we took it!” the middle nagini cried.

The makara frowned. He had planned to simply declare one of them guardian—it certainly made no difference to him which—but it was clear there would be no end to the bickering while he remained.

He made his second and final wish, swift and soft as a breeze, then dropped the jewel into the water. Its many hues shifted as it disappeared. “The first one of you to find it will be its guardian.”

“I’ll bite you for that!” the tallest nagini promised, showing her venom-dripping fangs.

“Only if you catch me first,” the makara replied.

Before she could protest, he dove into the river, a grin of his own spreading over his crocodile jaw. Hissing, the indignant nagas transformed into their snake aspects, glistening bodies rippling as they slithered in after him. Their movements were so liquid, so graceful and loose, the nagas might have merged with the water, or been made of it. “I see it!” the middle nagini shouted, then shot down toward the riverbed.

One of them would succeed in finding the jewel, the makara thought. And if not, at least the search would give him enough time to get away.

Upon his return, he found Ganga waiting, an infant cradled against her pink sari–clad chest, but no Shantanu in sight. She tilted her head, the curve of her plump lips and the waves of her long hair as beguiling as the river at her back. “My work here is done—for now, anyway. I will explain on the way. Come, we must be off.”

The makara, sated and pleased his second wish had come true, knelt so Ganga could take her place atop his saddle. He hadn’t expected her to appear bearing a child, but traveling with the goddess always had its surprises.

“The more, the merrier. Where to, devi?”