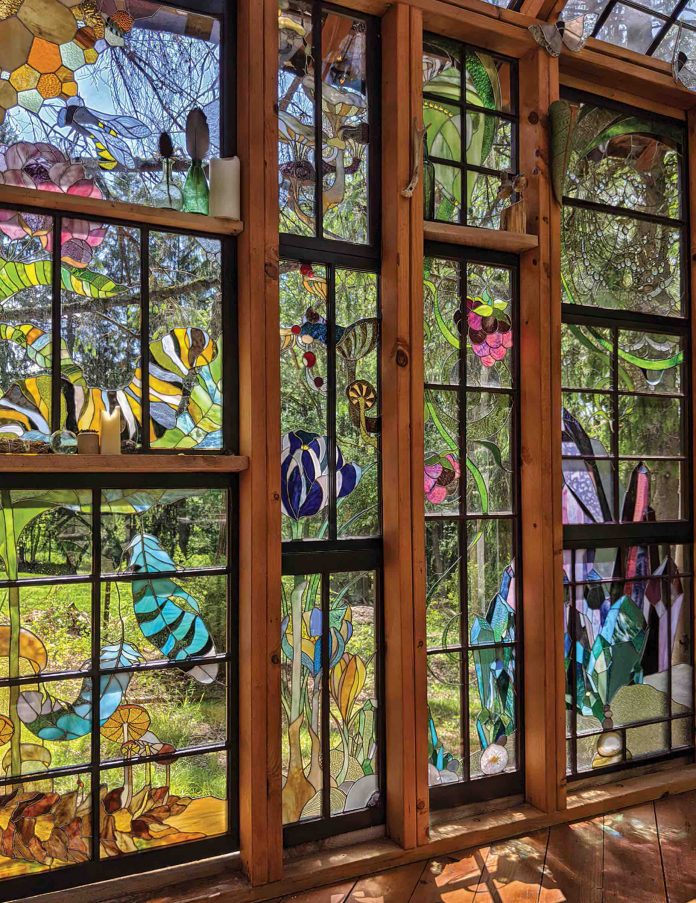 Neile Cooper’s masterpiece is a breathtaking experience at night. Walking through a small woods in the town of Lake Mohawk, New Jersey, you see a bright beam of light. Step closer, and the light starts to differentiate itself into colors and shapes—sinuous green leaves and stems, red mushrooms, bright flowers, a wide monarch butterfly. Giant birds peer in—or do they look out?

Welcome to Cooper’s personal inspiration space, an eight-by-twelve-foot stained-glass cabin she built in her backyard. Here she imagines the designs for other projects, from windows to jewelry. But the cabin itself is truly her magnum opus.

“My dream project,” she calls it, “my creative sanctuary.” Close the door to find yourself inside a web of glass and graceful leading, watched over by those butterflies and birds. During daytime, the light shining through bathes your body in splashes of color.

Cooper worked in stained glass for eighteen years before starting the cabin; its origins were in doodles she made while fulfilling commissions. “I sketched the idea loosely for years,” she says, “just little drawings of house shapes covered in ferns, or mushrooms, or birds.” The cabin developed organically out of those early pencilings.

In the beginning, she says, the sketches were “a refuge from the demands of making a living as an artist. I had been taking on pretty much any commission work that presented itself and doing my best to create items that my customers would love. Though I was honing my craft, I didn’t feel like I had a really clear voice.”

Designing the cabin gave her that voice. “I didn’t have any constraints—especially at first, when I didn’t consider actually building it!”

But build it she did, in 2014. What got her started after years of fantasizing? “I honestly don’t know what actually pushed me over the line from dream to construction,” she says. “I think it was just the perfect storm of tiny little motivations and impulses—and probably some binge watching of Treehouse Masters. The fact that I can’t pin it on one definable moment has taught me the lesson that you don’t need to wait for the perfect time or reason to jump into a huge project.”

When Cooper was ready to jump, she collected reclaimed wooden window frames and laid them out in the same way she might have pieced together a smaller work, in a puzzle that fit the walls she had planned. She and her father-in-law built the cabin with the clear panes in place; she is able to remove them piece by piece to allow new designs.

Finally she began to plan what would go into the first windowpanes, starting with flowers, snails, and honeycombs, “all oversize, so that the cabin would feel like something from a fairy tale. I indulged my every whim. I knew that I wanted a hawk on the roof, and it wound up having a twelve-foot wingspan!”

Of course there had to be butterflies. From her earliest days as a stained-glass artist, they have inspired her work. “Especially monarchs,” she notes. “The way the black lines on the wings frame the beautiful golden patches lends itself to the lead lines of stained glass. And the white polka dots, the emerald and gold of the chrysalis—they remind me of the most beautiful pieces of stained glass.”

Cooper’s style is grounded in a careful study of plants and animals, which she adapts to the special requirements of her medium. She has a studio for the physical work of cutting, foiling, and soldering the metal and glass pieces, but the cabin gives her a cocoon for dreaming about those other creations. There are three panels left to be mounted. She made one of them as a project for her book, Kicking Glass, forthcoming next March. Other panes will stay clear; those are part of a design that brings nature into her retreat.

“It was intended to be a place of solitude,” she says, “so it faces away from the house and toward the woods. But being in the cabin keeps me connected to the outside world, whether it’s the chickadees that live in the birdhouse above the front steps, or the multitude of deer, fawns, foxes, and sometimes bears who we share the space with, or the kids next door, who built a path and visit when they see me hanging out.”

The cabin has been inspiring others, including her clients, to re-envision their own living and working spaces.

“It’s kind of ironic that it was built for me,” she says, “as my own folly. But now people seek me out and ask me to do work for them using the same style.” One large current commission, for example, is an installation for a Kentucky distillery.

Her fairy-tale cabin’s last two designs will draw again from its natural surroundings. “There’s going to be an awesome emergence of cicadas this spring,” she says, “and I love the brilliant green of their bodies when they’re freshly molted. The fleeting presence of these insects will pair well with the firefly panel.” And the final piece? “It is still a mystery to me, but I like the idea that inspiration is out there waiting to be found.” 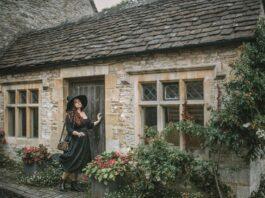 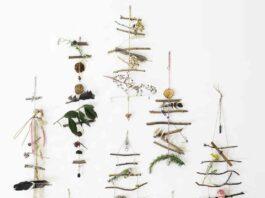