Amber entices us, entraps us willingly, lures us into its honeycolored depths. Even if the particular piece we admire does not include a small creature caught in the fossilized resin, we still look for bubbles, a pine needle, small pieces of debris—the marks of a history that speaks of millennia instead of minutes. For a moment, this small soft gemstone allows us to see far into the past.

Despite the sad fate of any spider, dragonfly, or other tiny animal we might see captured and preserved inside this once- liquid substance, there is a healing energy to amber. Actually fossilized resin from trees that died many millions of years ago, amber was once the honey-colored substance secreted by the tree as a healing mechanism in response to any cuts or wounds the tree sustained. Over the centuries of human civilization, amber has also been linked to various health benefits. Pre- conversion Vikings and Anglo-Saxons wore necklaces of amber for its healing properties and protection from witches. Even the father of medicine, Hippocrates, described the various benefits of amber such as the healing of wounds and skin diseases while later alchemical healers worked with amber wands. Modern science is skeptical of the accuracy of these claims, but many parents still purchase amber bead necklaces to help relieve their baby’s teething pain. 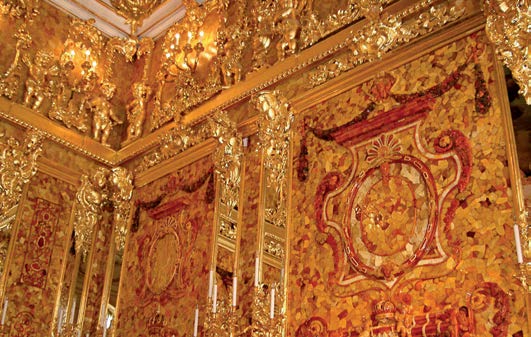 The most famous and readily available amber is Baltic amber.

Around forty-five million years old, this gemstone originated from the trees around Northern Europe near the bed of the Baltic Sea. It’s not entirely clear why the gemstone is so profuse in the area. According to one explanation, when the climate shifted and warmed so many million years ago, the trees began exuding more and more resin. Today, you can find fishermen out wading in the water with nets, searching the tide for gems instead of fish. After a storm, many wanderers will walk along the beach looking for washed-up stones. Baltic amber is also the only kind of amber that includes succinic acid, a naturally healing immune agent that some people use as the scientific basis for a belief in amber’s healing power.

One explanation for the profusion of amber along the Baltic shores is more romantic and tragic. According to a Lithuanian legend, the sea goddess Jiirate lived in a palace made of amber on the floor of the Baltic Sea. She fell in love with a mortal fisherman, Kastytis. But when the powerful thunder god Perkiinas learned of her feelings for a mere mortal, he struck down Kastytis with lightning bolts, destroying Jiirate’s castle. The sea goddess was chained to the ruins of her once proud castle, there to remain for all eternity. In storms today you can still hear her crying, and pieces of her palace still wash up on the shore.

Equally mournful is the Greek myth of amber’s origin. Phaethon, the son of the sun god Apollo, asked to drive his father’s sun chariot. He was unable to control the horses and drove them too close to the earth and set the world ablaze. To save the world, Zeus struck Phaethon down with a lightning bolt and the boy’s body fell to earth, into the River Eridanus. His sisters the Heliades found his body and stayed by it, taking root and turning into trees. They continued to cry, and their tears became amber.

Amber is a very soft gemstone, only 2-2.5 on the Mohs hardness scale, and is both a challenging and enticing medium for creative projects. Some artists carve into the soft stone, creating images and designs on the surface. Some artists will cut pieces of amber into shapes and affix them together, creating a landscape in a form similar to mosaic or inlay.

In Russia, amber is often carved into delicate and intricate teacups, nearly transparent with swirling natural shapes to the stone.

The most extraordinary amber art ever created was the Amber Room at Catherine Palace in St. Petersburg. First constructed in 1701 Prussia as a gift from King Frederick I to Czar Peter the Great, it was looted by the Nazis during World War II and brought to Königsberg Castle in East Prussia only to end up being destroyed by British bombers and Soviet artillery four years later. There are, however, conflicting accounts and eyewitness reports that suggest the Amber Room or parts of it survived and are hidden elsewhere. In 2003, Russian and German artisans completed its intricate reconstruction, which took over two decades, and the new room was inaugurated at the Catherine Palace in time to mark the three-hundredth anniversary of St Petersburg.

Amber wall panels feature three hundred and fifty different shades of the gemstone, intricately carved to glow in the light of the room’s chandeliers. Other art forms shine in this room, including four Florentine mosaics created from all natural minerals. A patterned parquet wood floor swirls elaborately under one’s feet, while above, in the center of the ceiling, is a beautiful fresco. Standing in this room, it’s easy to imagine oneself a mosquito trapped in the center of a piece of warm glowing amber.

Although one can actually find amber in a multitude of colors (up to two hundred and fifty-six shades have been recorded!) including green, blue, red, and black, by far the most profuse color is the golden-yellow, honey shade we know best. Like honey itself, it is mysterious and ancient, with a reputation for healing. And its beautiful translucency glows with an inner fire that no other gemstone quite mimics.

Amber was around long before us, and will be around long after we are gone. We are happy to be trapped in its mysteries.