Home Creative Art Aubrey Beardsley and the Weight of Decadence 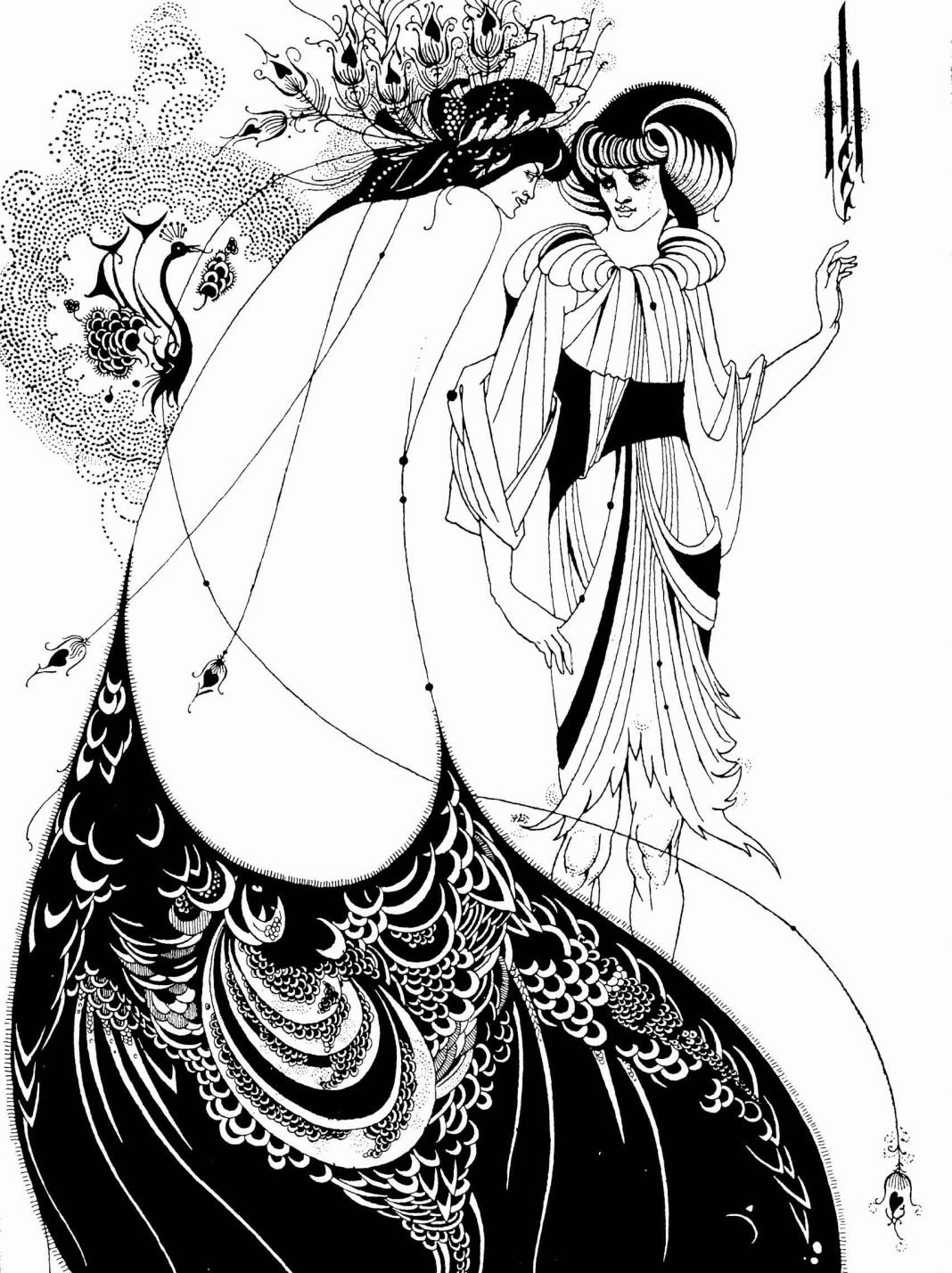 The Peacock Skirt (1893), by Aubrey Beardsley

If you’re anything like me, you might have increased in mass over the past eighteen months. While the frightening reality of a pandemic raged, one little comfort we could indulge in was eating delicious food, and that got many of us through some difficult moments. However, I am left with a little more padding than I had in spring 2020, and recently I have seen many articles on how to lose the lockdown weight as if it is not compatible with a shame-free, post-pandemic life. Health issues aside, an awful lot of our attitude toward weight seems to be aesthetic, as if trim is more desirable than plush. In search of a bit of counterpropaganda, I have turned to the decadence of Aubrey Beardsley (1872-1898), a brief reed of a man who understood a bit about decadent flesh.

Beardsley was a precocious young illustrator who is famous now for his pen-and-ink illustrations of risqué scenes. In his brief and difficult life, Beardsley created a style that defines our ideas of all that is sophisticatedly saucy, simultaneously austere in form and smutty in content. Young Aubrey did not have a very luxurious start in life; he was born into a rather well-to-do family, but shame and scandal soon saw the family fall on hard times. His father was forced to sell land from which their income was drawn to pay off another woman who claimed he had jilted her. Not only that, but what the family lacked in money, they made up for in tuberculosis. Aubrey’s grandfather and father were both riddled with it, and it wasn’t long before little Aubrey also succumbed. Consumption would gnaw at him for the rest of his short life. He was often ill, but even while laid low with the terrible disease, he could still draw. What he chose to draw was enthusiastic, plentiful flesh.

If you consider who Beardsley’s influences are, his choices are a little puzzling at first glance. He was guided into art in 1891 by Edward Burne-Jones, a second-generation Pre-Raphaelite who adored androgyny. Burne-Jones ridiculed fat women in cartoons, and his father had a morbid fear of plump women. Burne-Jones’s influence over the career of Beardsley can be seen in the subject matter: Both artists tackled romantic, Arthurian subjects. But Beardsley’s subsequent trip to Paris in 1892 added a dynamic edge to his figures. The poster art of Toulouse-Lautrec, filled with salacious ladies and grateful gentlemen, moved Beardsley from the noble, knightly pursuits toward less noble, nightly pursuits. If his body wasn’t up to chasing women, then his art certainly made up for that.

The most obvious tributes that Beardsley made to fleshly women are both from 1894. The Fat Woman shows a voluptuous white creature dazzling in the middle of a dark and sullen café, her black gloves curving around a comically small glass. Behind her, reflected in the mirror, seems to be a chaos of shadow and abstract form, but the woman is solid and real, looking altogether smug and self-possessed. She has that bottle all to herself and she will enjoy it, tiny glass by tiny glass. Beardsley had intended his Fat Woman, allegedly a caricature of Beatrice Whistler, wife of the famous artist, to appear in the first edition of the notorious journal The Yellow Book, for which Beardsley was the art editor. However, the publisher refused to include it, worried that it would offend the influential Whistler. Instead, Beardsley had to be content with The Yellow Book’s cover girl in April 1894. In black and yellow, this lady is attending a masquerade ball, her joyous form topped with a cloudlike puff of hair and wide black halo hat. She holds a perilously thin candle as she faces her viewers with a jolly expression on her dimpled face. There is no doubt that she is up for a good time, but the smoke curling from the candle makes us wonder: Is all that decadence burning us out? Are we wasting away? Our host looks jolly enough, but what of her companion, slightly bowed behind her? Should we trust this seemingly bubbly woman or are we about to be debauched? Do we mind? I can barely remember the last time I had a good debauch. Obviously, we’d all have to wear masks—you can’t be too careful.

It isn’t just women that Beardsley depicted as fat, as shown in his 1897 illustration of Ali Baba for The Forty Thieves. The princely gent is shown cascading with flesh and jewels, the very personification of richness. He is quite rightly smug, as he is obviously doing very well for himself and there is a sense of wealth through physical form. This portly chap is not wasting away any time soon. His sense of otherness is multifaceted. He is obviously of some unspecified Eastern origin, an exaggeration of a sultan, dripping in treasure. He is lucky and prosperous, the complete reverse of his creator, the unlucky, willow-like Beardsley, despite sharing the same initials: AB.

Looking more at Beardsley’s depictions of flesh, it isn’t simply a case of excess but of control. Both the fat lady and the masked lady are dressed and in control of their Rubenesque bodies, but delving into Beardsley’s more extreme depictions of flesh, there is a case for bodily rebellion. Where clothes imprison the form, all is safe and peaceful. In his depiction of Guinevere from Arthurian legend, engulfed in a nun’s habit from which only her tiny face peeps, you know that full governance has been gained over passions. However, with his illustrations for Oscar Wilde’s Salome the same cannot be said. Salome herself erupts from her clothing, a swirling mass of body and passion, wrecking and undoing as she goes. She is not rotund, but her flesh is powerful, revealed in the “stomach dance” and rising into the air to grasp the head of John the Baptist. In the drawing Enter Herodias, her body defies gravity, her breasts moving up from the bed of fabric that tries to contain her while grotesque lumpen figures creep around the ground. In a giant step away from his origins under Burne-Jones’s tutelage, Beardsley rejected androgyny and a certain sexless safety in favor of intersex gods with both very definite male and female characteristics, not to mention some threatening additions with eyes for nipples, watching us as we try to comprehend the vastness of desire.

As if the frankly terrifying form of Salome weren’t enough, Beardsley set about producing illustrations for the Ancient Greek comedy Lysistrata, where the titular character convinces the women of two warring cities to withhold sexual favors from the men in order to end the conflict. With scenes of humorous frustration and extraordinary levels of nudity, Beardsley shows bodies both tantalizing and out of control. Penises grow to fantastical sizes, women flash and fart in rebellion against the desperate men, and seemingly no one’s flesh can be controlled or covered. Lack of physical control, while both dangerous and sexy in his art, might reflect the way Beardsley’s own body rebelled against him through illness. His bodily experience is more reflective of his early drawing Withered Spring, where a wan figure shelters from the spring breezes that bluster above them. Beardsley might have been alluding to the illness that battered him, lessening him like the shaken trees, without the energy or bodily strength to resist or join in.

The exuberant bodies of Beardsley’s imagination live in an otherness of decadence that he could only dream of as tuberculosis wasted him away. In his drawing The Wagnerites (1894), the physicality and sensual qualities of the Wagnerian operas are viewed by a sea of bare-backed women all turned from the artist, tantalizingly within reach but untouchable. Even within this sea of flesh, some women find their dresses have slipped more than is possibly acceptable, with bare shoulders and arms glowing in white against the deep, dark Indian ink. In Beardsley’s art, flesh cannot be controlled; it betrays and reveals us all. In Beardsley’s fantasies, if we are strong, we can enjoy the ride that our willful bodies take us on, but it should be acknowledged that bodies in decadent flow can diminish like a candle. Those bodies that flaunt and flourish are the absolute other for Beardsley and are so often women, sexual and plush.

The poverty of his youth combined with the ravages of his illness must have made the feverish Beardsley fantasize about pillowy mountains of welcoming bodies, knowing that his own pale candle was being burned into nothing. On his death bed at only twenty-five years old, he feared the punishment all those obscene drawings would bring to his heavenly body and so converted to Catholicism, begging his friends to destroy his obscene drawings and recanting his dreams of flesh. Luckily for us, his friends saved the drawings from the flames, so we still escape to the decadent imaginings of a feverish young man.