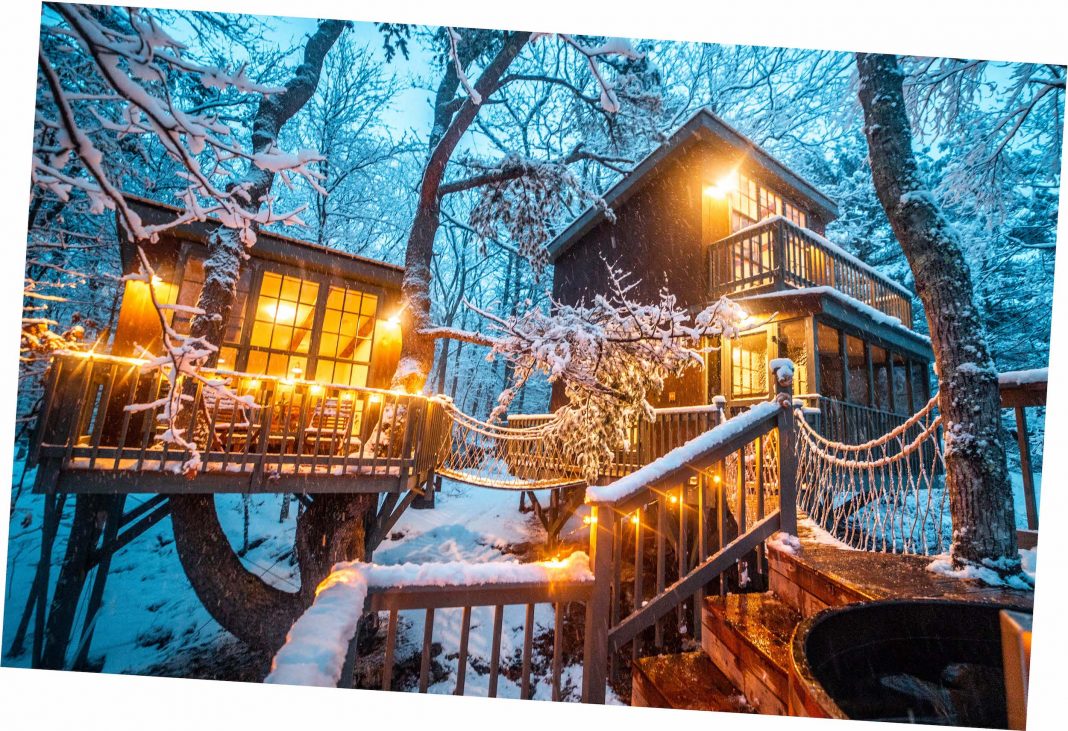 The little A-frame cabin looks so snug and safe, with its fairy lighting and ladder to the loft, snowshoes leaning easefully against the small, single bed and toboggans stacked along the far wall. You want to enter the image, maybe lie down and take a long, dreamless nap, as if you were Goldilocks discovering that just-right roost. But the picture bears no enchantment save for the joy it elicits, and the space itself existed for not much longer than the moment in time it took to photograph. The room was created nearly wholesale from the imagination of photographer Kyle “Finn” Dempsey, a 27-year-old Instagram influencer who—despite his young age and very 21st century job—seems to boast a very old soul.

“It’s a never-ending quest,” he says of his work, “to create these types of classic, timeless little scenes. I like the idea of the lone traveler, the lone creative, this guy who’s on a quest. He’s searching for something, so along the way he stops in these cabins. The thing that I always try to incorporate in my photographs is a feeling of peace. I want the viewer to be able to picture themselves there and just take a deep breath. Because that’s another thing I think those scenes are about—that sigh of relief that the day’s journey has ended.”

Dempsey found the abandoned cabin that would change his life in the late spring of 2016, not far from his Dalton, Massachusetts, home. It had mostly fallen into disrepair, but there was one little nook that, as if by alchemy, remained untouched by the elements. Struck with inspiration Dempsey dashed home, returning laden with the props that would help create the rustic, deeply romantic interior. Here went an old blue enamel percolator, the kind you might see sitting over a campfire, there hung a couple cozy flannel shirts. Dempsey dressed the bed in blankets, added a wicker fishing pack basket to the scene, shot the result, and posted it to his Instagram account with the note, “My escape from the world”.

With an assist from Country Living magazine, which shared the photo, Dempsey’s follower count soared from about 10,000 to the more than half-million he has today. His work runs the gamut from the cabin interiors and exteriors that brought him social media fame to sweeping overhead views of bucolic mountain wildernesses he takes with his drone and outdoorsy scenes of camping, kayaking, and hiking. Dogs populate many of Dempsey’s photographs. Beautiful old throwback trucks sometimes make appearances, as do a couple of charming vintage VW vans. Dempsey also loves color. His photographs are rich with hues like crimson red, baby blue, and deep forest green, but while he says he used to dress about 40 percent of his images, these days “100 percent are real moments.”

Back when photography was simply a creative outlet, Dempsey shot his images all over New England, from Maine on down to Connecticut. They have an undeniably idyllic, Norman Rockwell–like feel. But for the past three or four years he’s been “very focused” on capturing the Berkshires, the mountain range in western Massachusetts where he was raised and still lives. “As time has gone on,” he says, “I’ve found that what is going to be the most timeless and make me the happiest to look back on are images that I create closer to home.” He pauses, adding, “Anyone can go to the spots that everyone knows about and create images. What I like to do is find the spots that nobody knows exist and make something out of nothing. I think that’s where the magic lies.”

Dempsey, who is nicknamed “Finn” after the free-spirited Mark Twain character for a reason, came of age in a place that sounds much like a setting from one of his photographs. “I grew up in this little red house on the Westfield River in the shadow of a mountain called Deer Hill,” he says. “I was barefoot every day in summer. I can run up a river, rock to rock, faster than any other human on earth, I swear. I fished and made forts with my friends in the woods out of sticks. I wasn’t a hunter, I liked animals too much, but I spent all my time outside.”

When the weather blew in and the air turned cold, Dempsey would turn to decorating his room, intent on making it a homey place of serenity and contentment. Eventually he graduated from Johnson and Wales University in Providence, Rhode Island, with a degree in advertising and the ability to operate a camera. He was working at Ooma Tesoro’s, a marinara sauce company, when his A-frame photo hit it big. As he amassed more Instagram followers, companies came calling, eager to hitch their wagon to the rising social media star. Dempsey quit the sauce gig, turned photography from a hobby into a profession, and has since promoted products through photographs and videos on his account for brands including Nature Valley, Land Rover, and Samuel Adams. The not insignificant amount of money Dempsey has earned has enabled him to purchase a cabin last year. “It’s right on a river in the middle of the woods,” he says. “It’s the place for deep breaths, to see little critters and hear noises and appreciate things. It’s a release for me, and the culmination of two years of inspiration and searching. I’ve stayed at hundreds of cabins and picked my favorite things from each one. I’m going to combine them all into my dream cabin. It’s a small, simple structure with a loft and a screened-in porch, but I’m installing thirteen windows, skylights, huge bay windows, and we’re doing a big dormer on the roof that lifts and makes more space in the loft. And it’s all off the grid. There’s no electricity, no running water, nothing. So we’re going to do a big solar thing. It’s going to be one of the most unique places on Earth when it’s done.”

It sounds like sweet relief from a too-loud, too-demanding world—a return to a simpler time. Which is much the same feeling created by Dempsey’s photographs, and perhaps the reason for their immense popularity. “The theme I strive for is simplicity and finding happiness in the simple things and the simple moments,” Dempsey says. “I actually painted a mural in my office that says, ‘All in good time.’ We’re so frantic these days. We want everything done now. There’s no patience. And when you slow down and breathe deep and come back to simpler times and not needing everything right away, it makes life more enjoyable, especially in the moment. So that is a thing that I will forever be chasing: simplicity.”

If you’re inspired by Dempsey’s version of hygge, he has shared some suggestions to help you create your own dreamy space.

Lighting is key to setting the correct ambiance, according to Dempsey. Candles help make for a soft, cozy glow, and so do lanterns. “Anything that looks like an Edison bulb is probably a good call,” he says, “whether it’s used in a ceiling fixture or you install fairy lights that have Edison bulbs. Just make sure you get amber and not white bulbs, because you want your light to be warm.” Hardly anything beats a fire for setting an inviting, relaxed mood, but even if you don’t have a wood stove, Dempsey suggests that “one of the greatest things, especially in a winter space, is stacked wood. It looks so good.”

Don’t forget to drape your space in softness, like adding a rug to match the color palette you’ve chosen. “I love vintage blankets with nice stripes,” Dempsey says. “Specifically Hudson Bay blankets. You can get them on Ebay for fifty bucks—they’re these huge wool blankets that are just one of the all-time great products.”

Dempsey helps create a sweetly nostalgic mood in his images with props like vintage typewriters, old record players, and vinyl records. “I get a lot of my products from antique stores,” he says. “You might go there and find one item that really makes the difference. If you really want the rustic, vintage feel of timeless, cozy products that were made to last, you can’t just buy them at Target. It’s going to take some searching.”