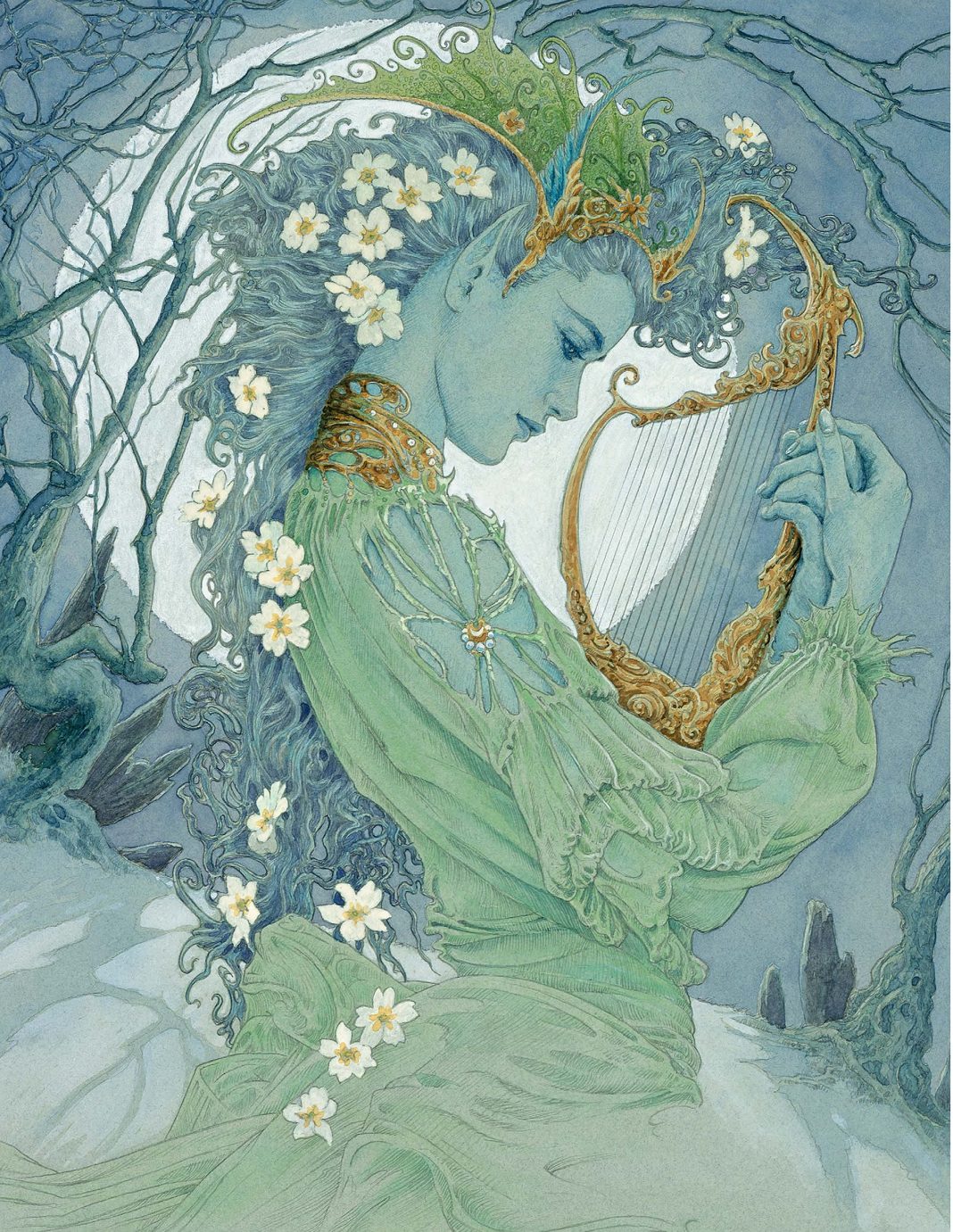 Sit in sweet wonderment gazing at the work of British artist Ed Org and you will be transported to another world, one of mythical, magical women—powerful, capable, but all the more graceful for it. With a style that lies somewhere between Alphonse Mucha and the Art Nouveau movement and Pre-Raphaelites like Edward Burne-Jones, Org’s magnificent art often imagines lush woodland queens enwrapped and embraced by the forest. Draped in twining greenery, they wear crowns of peacock feathers or fantastical animal horns, their flowing hair woven with flowering blooms. Around them rest their animal subjects: swan and hare, butterfly and bird.

It’s fair to say that Org’s aesthetic—his fascination with both the natural world and the mystical—can be traced to a youth spent in Shropshire, England. Legends and folklore always interested him, as did the surrounding woods that he says he was free to roam as he liked. “Though it was a heavily mined area in the early 19th and 20th centuries, nature had reclaimed everything,” he says. “I could explore dappled woodlands, ruined barns, secret pools and streams, disused railway lines with hidden apple and pear trees, and ruined cottages with secret plum trees. Above all it was a landscape rich in wildlife, which was a paradise for village kids like us.”

Although art didn’t precisely entice him as a child, Org’s early talent must have been prodigious. Family lore has it that his primary school headmaster told his father that Org would become an artist in adulthood. Fate took its course a decade or so later, and Org entered Cheltenham College of Art. There he discovered the work of Mucha and the English book illustrator Arthur Rackham, as well as J.R.R. Tolkien. He was so influenced by the Lord of the Rings novels that he based his B.A. art show on them.

After a spell as a graphic designer, Org returned to his personal work in 1992. Today he is famed for his mysterious, ethereal pencil drawings as well as newer art made in pen, ink, and watercolor. “I find it frees me up stylistically,” he says. “I perhaps experiment a bit more with watercolor, as I use colored pencils, chalk, and pastels to get the various effects. However, I always return to the pencil … Different pencils leave their own distinctive mark. I use engraved strokes, smudging, graphite powder mixed with gum Arabic, random squiggles, and hatching. It is the mosaic-like buildup of various pencil marks and patterns, the finer detail, that I find interesting.”

With a home in the celebrated natural splendor of England’s Cotswolds, Org can roam as much as he did as a child, finding inspiration in what he calls “the wonderful bird life and butterflies in summer.” But his studio sets his imagination free as well, chock-full as it is of books on shelves and inspiring items like colored glass bottles draped with jewels of all kinds, vases holding beautiful peacock feathers, and mannequin heads adorned with handmade floral headpieces. With their help, he says, “I can re-create a variety of themes such as medieval, Arabian Nights, or numerous fantasy scenes with furniture and props.”

As he prepares to enter the third decade of the second phase of his career, Org says that first and foremost he “strives to create and perpetuate beauty. My work may be influenced by art from a bygone era,” he adds, “but I hope that it has just as much relevance today. It will be for others to decide whether my work has any value in the future.”