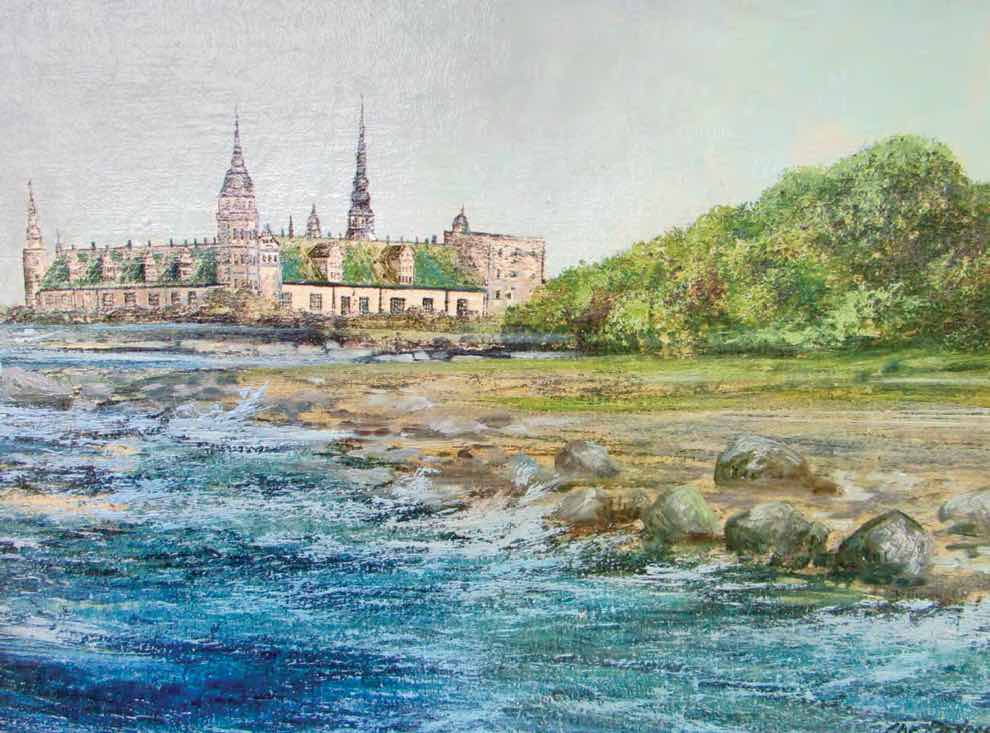 The enchantment was born in the first green spires of Copenhagen. They flashed past on the drive from the airport, back before you could take a train to connect to the city. Their verdigris was an unfamiliar, particular shade of aqua, rising above white stone and red brick and then vanishing as the car passed at speed.

A castle, a stock exchange, a handful of churches—all of which my mother’s family identified in passing as if there were nothing particularly special about buildings so beautiful. Denmark is a flat country, but Copenhagen’s towers and spires reach into the clouds, and they are reflected in the lakes, canals, and calm seas. A spire there might be an orderly series of balls pointing straight into the sky, or a staircase wrapping a tower all the way to the top, or the tails of three dragons twined together. They are enchanting, inspiring, fanciful, functional.

I was three years old, six years old, eleven. I thought Denmark was a fairy tale, and I was right. It’s also a very personal fairy tale, with magic so deeply woven into everyday life that belief is almost pragmatic.

This is, of course, the homeland of Hans Christian Andersen (or as the Danes call him, H. C. or just Hans Andersen), who was too shrimpy to be much use as a sailor and so made a go of his writing. He didn’t write for children and he certainly didn’t like having them sit in his lap, but his eventyr have shaped the way many of us see the world.

I learned to read both English and Danish from different versions of Andersen’s fairy tales, searching for words I remembered in the shapes on the page. This is also how I constructed a mental land- and cityscape infused with enchantments and double crosses, through casual references in the text and from marvelous illustrations by Jiri Trnka or Kay Nielsen. From “The Tinderbox,” I learned about the Round Tower, a Renaissance observatory that’s a cobblestoned spiral inside, so the royal coach could ride up to the top. And elsewhere, the green spire of Our Savior’s Church, the central point of the neighborhood where my mother was born. And in pictures, Christiansborg Palace, once the stately royal residence, now home to the Danish Parliament. Andersen himself was born in Odense but lived in one of the narrow houses in Copenhagen’s Nyhavn, which was then a seedy harbor where sailors crammed into boarding houses above and bought beer and tattoos on the waterfront below. It has now become very colorfully fashionable—and still a good place to get inked.

As to the skies, there was Tycho Brahe—a lord, astronomer, alchemist, and wearer of a brass prosthetic nose. He studied the supernova of 1572 and rewrote the science of stars. He’s said to have died of a ruptured bladder because he was too polite to get up and urinate at a state banquet.

In 1767, the young princess Caroline Mathilde married the mad King Christian VII. She soon found true love—with Christian’s doctor, Struensee. The two of them cavorted through curlicued palaces and blue-tiled baths; they also subtly took power and made democratic improvements to the government … before they were arrested, exiled, and, in Struensee’s case, executed. The takeaway: Even what’s rotten in the state of Denmark might arc toward good.

Incidentally, in historian Saxo Grammaticus’s chronicles of Denmark, the Gesta Danorum, there is a Prince Amleth, who did, like Hamlet, take revenge. That Amleth was a chieftain-king who lived in Jutland, nowhere near Elsinore. But one visit to Kronborg Castle—walls pushing into the water, spires piercing the clouds, as in the painting above—will make you believe not just in Hamlet but also in the legend of Holger Danske, a medieval warrior who sleeps somewhere within those walls, ready to wake up when the country needs him.

One of the past century’s most magical storytellers was Karen Blixen, known in the U.S. as Isak Dinesen. She continued the Danish tradition of enchantment with darkly soaring gothic tales, along with memoirs such as Out of Africa chronicling a remarkable life. She wrote in a picturesque farmhouse by the sea in Rungstedlund, now a museum. And to prove that Danish magic is personal, my grandparents used to know Blixen—in Denmark, you might actually come within a stone’s throw of the enchanters you admire. Sadly, they said she wasn’t a very nice person. She suffered terribly from the pains of syphilis, much as King Christian did.

In our childhood, my sister and I longed to see castles, but we didn’t visit any of those places back then. No one in the family considered the castles particularly fascinating; they were just part of a real, everyday world. But at our grandparents’ house, we did play like children in a fairy tale—Sleeping Beauty in the ring of our grandfather’s rose garden, or leaning over the edge of a balcony like Rapunzel. The summer nights seemed to stay light forever; on the longest night of the year, everyone troops down to the sea to watch a witch (just a dummy, of course) and her boat be set on fire, cleansing the country of malevolence for the next year.

Inside the house, a grandfather clock ticked away minutes so loudly they could be heard everywhere, even in the cellar.

I got my sense of the world in my grandfather’s shop, Den Gule Butik, which carried rare stamps and coins. Looking at them, I began to understand how big and varied the world is and how small a thing can matter in it. The tiniest misprint on a stamp could make someone’s fortune.

Once, later, we visited the old dairy in the countryside that served as a kind of warehouse. The stalls were piled high with “ordinary” stamps from all over the world. He gave me a thick plastic shopping bag to hold, and then he took an actual shovel and filled the bag, telling me that the world was now mine.

The famous statue of the Little Mermaid was the one tourist site that we did get to see, thanks to our mermaid-loving mother. But there were always so many people mobbing around the mermaid that for me, at least, that melancholy Dane was robbed of her magic. She seemed more precious in the wee statuettes that our family gave us, those smaller mermaids we could hold in our hands.

The real statue became special to me after my mother died. She had wanted to become foam on the sea, as in Andersen’s story, so I brought a spoonful of ash to dissolve in the water around the Little Mermaid. Then I started visiting her every time I went to town; she had at last become both familiar and magical.

The magic is just as strong in the villages as it is in the city—especially Gilleleje, where my grandfather was born in a house that jutted into a graveyard. At the other end of the graveyard stands a church where the congregants became famous for smuggling Jews to Sweden during the Nazi occupation.

One of those smugglers was my great aunt Else. Nobody talked about her work, however; we talked about her food. She and her sister Vida lived in a cottage down the road from that graveyard house. They were like the plump, cheek-pinching good witches from one of Andersen’s
or Blixen’s cheerier tales. They served gargantuan meals and actually expected us to eat everything, from the roast pork with its thick crisped rind to tiny potatoes swimming in butter and rolled-up cream cake and chocolate frogs filled with orange liqueur that burned our throats, jelly rolls, strawberry shortcake, and a startling array of herring. After a few tries, nobody expected us to eat that much herring, but we devoured everything else.

Once we had stuffed ourselves, we’d take a walk through an almost unbearably pretty village of thatched roofs and half-timbered walls, then wade in a sea with small, child-size waves—wavelets, really. Our grandparents would point to Sweden, a fuzzy scribble through the mist, and say it really wasn’t as interesting as Denmark. Then we’d walk back to our cottage, which even had a name—Mindet, meaning “memory.” Lunch was followed by afternoon tea, which meant even more cakes and pastry and fluffy candies and dense candies until everyone was so stuffed with rich food that there was nothing to do but try to talk it all out at the top of their lungs in a nasal, glottal-stop language I strained to understand.

A few years ago, I built a dollhouse in tribute to Mindet and dedicated especially to a great aunt I never met. Nelly Rasmussen was the more or less official psychic for Gilleleje, and her parlor was as crowded with ghosts as with knickknacks.

Her specialty was in speaking to the dead, and it is said that her trances went deeper and deeper into the Other Side and lasted longer, until finally the spirits kept her with them and her earthly body died. That is the legend, and it has always felt beautiful to me.

Nelly didn’t live to see those particular lunches and walks or to take trips into Copenhagen once the train connected village and city. But her spirit was able to cross over. I like to think she came to my very first wedding, when I convinced my jetlagged boyfriend to trudge out to an ancient dolmen, or stendysse, overlooking Humlebæk Harbor—another small town, where my aunt lives. We lay down on the flat rock, held hands, and vowed to the sky that we would be together forever.

A few years later, we married in front of actual people on our farmhouse porch in Virginia—where every room creates a mini-Denmark with paintings of the castles, photos of the aunts, and bookshelves full of magical stories.

Though I am grown up now and a citizen of the “real” world, Denmark has never lost its magic. Those green spires and wavelets are the heart of a fairy tale spun from threads of memory.