Fashion and textile designer Jan Knibbs, whose couture work we feature in “Time for Changelings” on the preceding pages, recently fulfilled a dream she’s had since she was a child: opening a magical treasure-filled shop in the heart of an artisan, bohemian area known as The Suffolks, in Cheltenham, England.

Named Atelier 19, her shop is not only a showroom for her own work but a romantic wonderland filled with dreamy original vintage wedding dresses and a handpicked collection of clothing and accessories from other artisans. These include Fiori Couture, whose crowns and corsets have been featured in several issues of Faerie Magazine, and award-winning milliner Gemma Sangwine, who creates dazzling hairpieces and tiaras incorporating vintage brooches. Knibbs also stocks a curated and eclectic mix of old and new curios and French brocante finds.

“I’ve basically filled the shop with everything I love,” she says. “It really does feel as if everything I’ve done throughout my life has finally come together and I’ve finally achieved my lifelong dream.”

Adding to the dreamlike feel are the series of vintage tea parties Knibbs throws at the shop, using her own vintage china. She also hosts regular makeovers and photo shoots in which the fashion-minded can dress up in the vintage clothes she’s been accumulating since she was a teenager. The shop also offers a series of workshops in which attendees can make delights such as flower crowns, heart mosaics, or embroidered brooches, and they can learn calligraphy, embroidery techniques, couture beading, and embellishment, to name a few skills. Basically, it’s a gathering—and a promotion—of everything lovely.

The star pieces, of course, are those Knibbs makes herself, one-of-a-kind designs featuring her award-winning couture embroidery. She specialized in embroidery at Loughborough College of Art and went on to get an M.A. in textiles at Bath Spa University. Embroidery has been her lifelong passion, although she spent a short while as a wardrobe mistress and for a time ran her own knitwear company. For many years she made embroidered wall hangings that she called “Poembroidery,” illustrating the poems of modern writers as well as 19th century favorites like Christina Rossetti and Thomas Hood. When she remarried twenty-five years ago, she made her own wedding dress covered in spring flowers, adorning it with an abundance of 3-D embroidered roses, pansies, daisies, primroses, honeysuckle, and ivy. The dress was a turning point in her career, and she reached the semifinals of the British Bridal Awards with it too boot. “It’s still one of the most admired dresses in my shop,” she says now. She won the British Bridal Awards a couple of years later with a Belle Époque–style dress inspired by Chinese hand-painted wallpaper.

She’s continued to learn more and more couture techniques to add to her repertoire of skills, often incorporating delicate floral designs in appliqué, ribbon embroidery, and beadwork, especially Swarovski crystals. “My signature style,” she says, “is to mix many of these techniques with vintage finds” including vintage fabrics, off-cuts, antique lace, and pieces of costume jewelry. In the “Time for Changelings” shoot, for example, the duchess wears a 1970s wedding dress (“think Princess Diana,” Knibbs says) customized with a beautiful Edwardian lace ruffle she’s had since she was a teenager, as well as a swatch
of handmade silk and a few vintage flowers. She also loves replicating nature, and flowers especially, as accurately as she can. What she loves most about embroidery, though, is “the incredible vocabulary of techniques and mediums available at your fingertips.”

Knibbs has continued to win prizes for her work, and the “Time for Changelings” shoot features some of her winning designs. Prince Charming wears a heavily embellished cream velvet jacket and a customized antique lace choker for which she won the Swarovski Prize in the international Hand and Lock Prize for Embroidery in 2008. The beguiling Fairy Prince wears a cloak that Knibbs made for a production of A Midsummer Night’s Dream—he pulls it off in true fairy fashion!—with a feather and beaded epaulette and headdress made originally for the Hand and Lock Prize and then altered for a wearable art competition, Art Couture in Painswick. (The fairy girl is wearing a Titania dress from the same production.) Other prize-winning creations are displayed in Knibbs’s shop: Her 2008 Swarovski Prize in the Hand and Lock Prize for Embroidery also included a wedding dress and matching hand-embroidered shoes inspired by the W.B. Yeats poem “He Remembers Forgotten Beauty.” She came in second two other years, once with a military-style jacket partly inspired by Adam and the Ants, and once with an outfit inspired by a chance meeting of Marie Antoinette with Barbarella.

Now that she has the perfect platform in Atelier 19 to display her creations, she’s enjoying collaborations with photographers like Danniella Jaine—and also working more and more with brides looking for that perfect fantasy fairy-tale wedding dress. She’s currently working with a team on A Midsummer Night’s Dream–themed wedding that will include the bride’s dress and her children’s outfits as well. “I love nothing better than to be given a theme or brief and turning someone’s dream into a reality,” she says. “It’s my idea of heaven!” y Learn more at atelier19cheltenham.com. 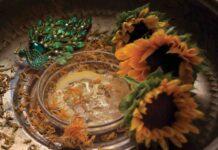 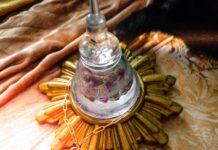 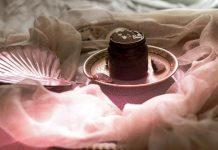