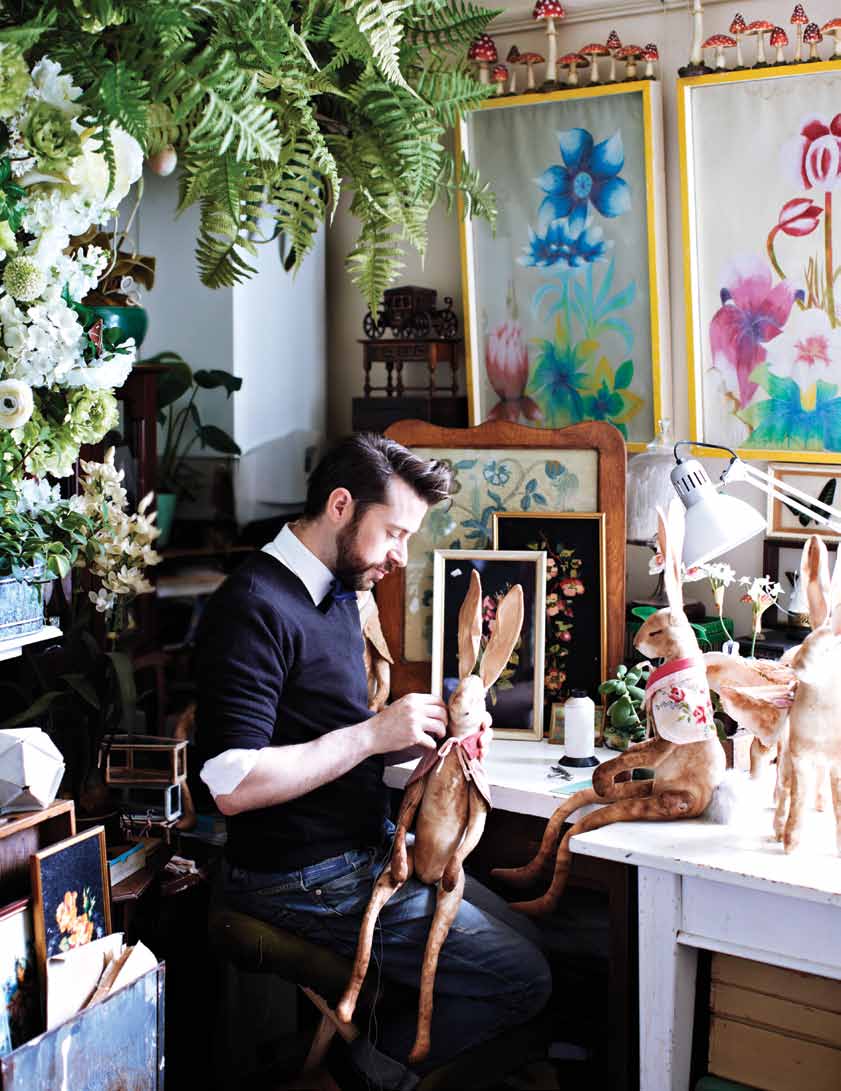 Ask Mister Finch to inscribe his book Mister Finch: Living in a Fairytale World (Glitterati Incorporated, Octo-ber 2014), and you’ll have to hold it up to a mirror to read what he’s written with his golden pen. Spending a little time with the British textile artist is like entering a wonderland where the handwriting is backwards, a spider spinning its web is worthy of a video clip on Instagram, and names are fantastical. Just ask him what his first name is, for example. “My friends call me Fincherella,” he said elusively. Hand him an umbrella and “Mary Poppins” is invoked, followed by a flying leap into the air.

“He has this huge imagination, a 3-D imagination,” said Marta Hallett, publisher of Glitterati, who clicked on a link to Mister Finch’s website and instantly
thought “book!”

Mister Finch, an artist who creates nature- and folklore-inspired hand-sewn textiles, has had book offers before but a simplified DIY crafts book— “great but can you do it in felt?”—was not his cup of tea.

“This was different; I don’t really want to do a craft book,” said Mister Finch over a cup of PG Tips after a Faerie Magazine shoot in New York City’s West Village. “Marta sent me a stack of books so I could get an idea of what they publish and I instantly understood.” He loved the lustrous paper, the production quality, and that the books represent what Ms. Hallett called “the ethos of the artist.” 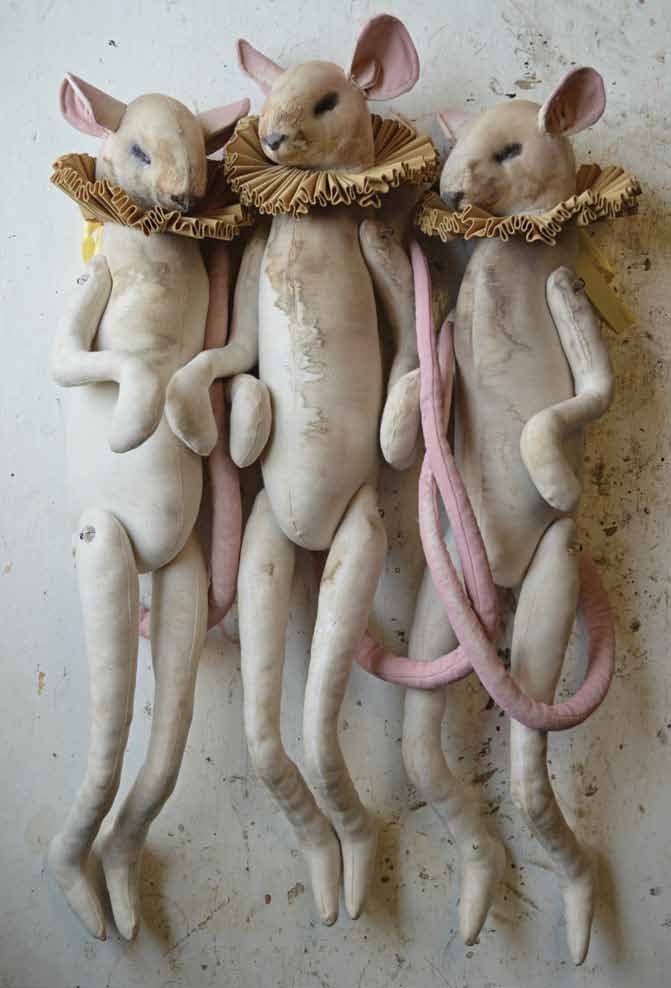 He uses tea, literally, to stain some of his often “upcy-cled” materials, which he describes in his book as “velvet curtains from an old hotel, a threadbare wedding dress and vintage aprons,” which become “birds and beasts looking for new owners and adventures.” It’s more than an ethical statement; he believes vintage upholstery, cur-tains, and hessian add authenticity and charm. It’s about rescuing treasures, “awakening poetry from decay.” His are “storytelling creations for people who are a little lost, found and forgotten.”

So he flew to New York to meet Ms. Hallett, and while poring over antiquarian books pulled from her shelves—Victorian books with gilded embossed covers and illumi-nated manuscripts—she suggested they replicate the look of these volumes in a new classic way.

“He’s an autodidact,” said Ms. Hallett, of the artist. Sewing, engraving, painting, designing, he does it all, after having gently segued from making jewelry for some six years where he created intimate pieces from vintage relics. These included lockets made from the bowls of two silver spoons soldered together, upon which he’d engrave messages and images. “Mostly I’d write about love, or the night, or insects,” said Mister Finch. “On the outside there might be a moth and on the inside, something about how the moth would only live a few days, and would fly around looking for love.”

Despite getting media attention for his jewelry, Mister Finch has exited the fashion world and entered a portal to a fantastical world of his own making. “I really began to hate the fashion scene and when I left it to work on textiles I promised myself not to do anything related,” he confided in an email. “I won’t even share any pictures online of people wear-ing my moths as hats, in case I get asked to make hats!!”

The book invites the reader to ex-perience his supernatural dreamscape, where melancholy and mirth flutter with embroidered or carpeted wings in circles beneath a silvery, luminous moon. When Designskool.net creator Justine Hand was looking for inspiration on Etsy, she came across Mister Finch, and her preface to his book reads like a love letter or romantic ode:

“To step into the realm of Mister Finch’s work is to delve into fantasy—where pearl-clad spiders invite you to tea, or high-born snails slither by with an exalted air. It is to be pulled into the imagination, to be hurtled headlong into a story.” She describes “the character of Mister Finch,” as “The Master Puppe-teer. A silent but omniscient partner” that “coaxes us into his work, his world.”

Etsy is where Mister Finch sells his creations. “People are going crazy over the book,” said Ms. Hallett. “He has more fans than artwork and it disappears on Etsy in about six seconds.” With the book, she says, everyone can own a little Mister Finch magic. 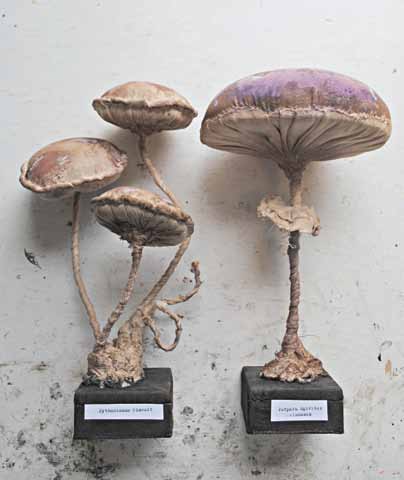 The pressing question: What inspires Mister Finch? His main influences come from nature as well as British folklore and fairy tales. Two tales from childhood that stand out for him are James and the Giant Peach by Roald Dahl and The Elves and the Shoemaker. “I loved how at night tiny be-ings came and helped the elderly couple,” he said. “As a result I have a thing for tiny shoes and have a collection of brass and metal shoes.”

His bookshelves, in fact, are filled with fairy tales. “I read them all, the classics, Grimm’s, and then I might read a fairy tale from Slovakia that has the same elements of, say, “Snow-White and Rose- Red,” with two girls who get lost in the wood. It’s astonishing how similar fairy tales from other countries are. There is almost a template. You’ll read one and they lived happily ever after, and in the next one her fingers were cut off and she ended her days in a cave alone. Some of them can end horrifically…some of them have very dark endings. 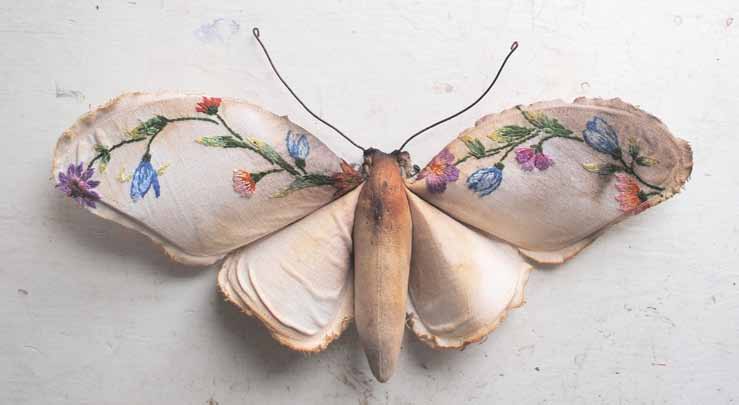 “At the moment, things are so hectic I don’t get a chance to read, so whilst I’m working, I like to listen to documentaries, from paranormal ones to all the natural world ones about insects and things to do with the Arctic and cold regions. I also love to watch old interviews with artists and old film stars, or black-and-white films, things that are sort of seasonal. Like now as it’s getting toward Christmas, I’ll watch The Bishop’s Wife with Cary Grant, and have things like that on in the background.”

And what about music? “I like listening to the sound of the rain and I have that looped so there’s no interruption and I can sort of zone out…I can just lose hours. I wouldn’t say it was faerieland, but it’s safe to say mentally I’m somewhere else,” he said, adding that he listens to thunderstorms as well. “Sometimes I do work really late at night and I’m in my room, and I’m sewing and making spiders and I’m drinking tea and the sound of thunder and the rain is perfect.”

Your favourite qualities in a man.
Manners.

Your favourite qualities in a woman.
Kindness.

Your favourite occupation.
The one I have now…I love it.

Your idea of happiness.
Traveling to new places and scouring for fabrics and junk.

Your idea of misery.
I think being in prison would be on the top of my list.

Your favourite colour and flower.
These both change all the time. At the moment I love deep inky green and I’ve been filling vases with twigs with berries.

If not yourself who would you be?
John Joseph Merlin, the maker of incredible automata.

Where would you like to live?
In Howl’s Moving Castle.

Your favourite heroes in real life.
Anyone who has overcome hardship.

Your favourite food and drink.
I love cheese and I love wine.

Your favourite names.
I like surnames for names, Clarke, Smith…etc.

Your favourite motto.
What you think about, comes about.