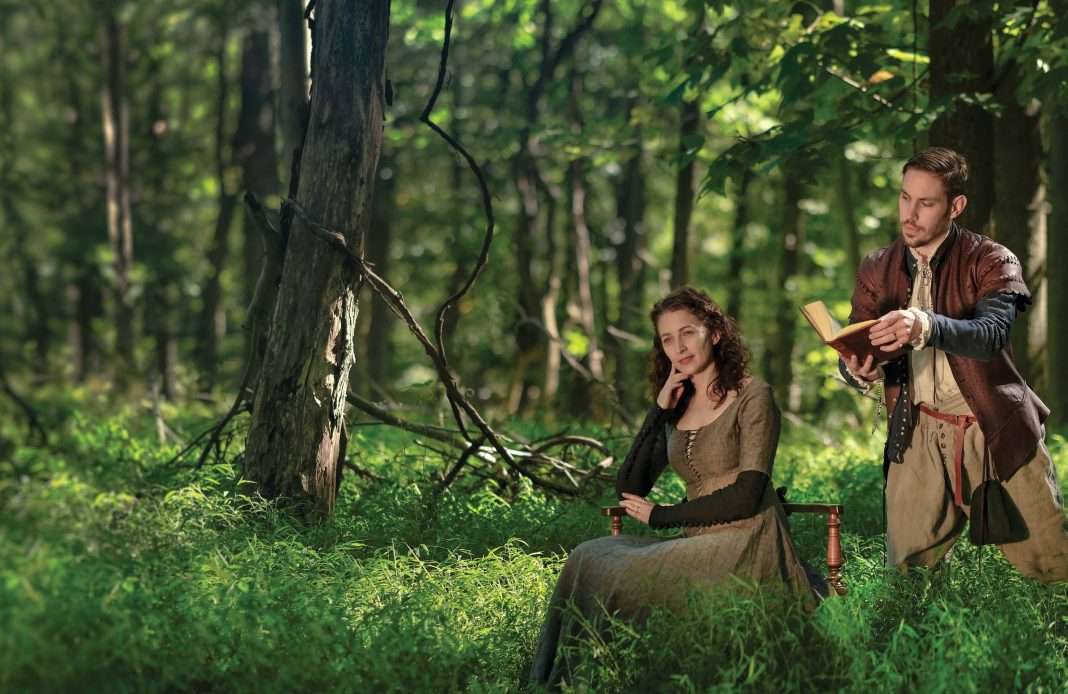 For an issue devoted to the Romantics, we may or may not have hit the romantic jackpot with our cover models Michael and Kelsey Arden, who might have emerged straight from an idealized, gorgeous past and landed in modern-day Maryland. Michael is not only an English teacher and poet but a Shakespeare-obsessed history buff who sews his own historically accurate garb. Kelsey is an engineer who’s enamored with the 14th century and finds joy in “doing some things the old-fashioned way,” like “hand sewing, tending a garden, or cooking from scratch.”

Both are active in the medieval re-creation group Society for Creative Anachronism: Michael’s persona is a 16th century poet angling for attention at the court of Elizabeth I (along with Sidney, Spenser, Marlowe, and Shakespeare, among others), while Kelsey’s is a 14th century minor noblewoman hailing from lands near Lyon in the eastern reaches of medieval France. For the group she’s taught numerous classes as well as workshops on, for example, making drawstring pouches and St. Birgitta’s caps. “In my modern life,” Kelsey says, “I have an excuse to wear a gown maybe once a year. When I’m re-enacting or cosplaying, I can wear flowing dresses that make me feel beautiful and powerful. Knowing I made the garment myself makes it even more special.” Both made all their own clothing seen in these images photographed by Steve Parke.

Both also identify strongly as “modern Romantics.” As Michael explains, “the Romantics loved the Middle Ages and constantly wrote about abandoned castles, forests, and fairies and knights and all the rest. That Romantic notion never really died, I don’t think, and we are kind of proof of that.” (We suspect that Enchanted Living might be as well!) “The Romantics definitely imagined the Middle Ages as they wanted them to be,” he continues, “and I think in the modern day we still do that all the time. The Society for Creative Anachronism often describes itself as ‘the Middle Ages as they should have been.’ ”

We love this, of course: that a period we’re idealizing in this issue was characterized in part by its own idealizing of the past.

Michael and Kelsey met in high school but reconnected after college. Now they’ve just celebrated their third wedding anniversary and recently bought their first home—where, among other things, they’re building a dry-stack stone wall the same way it might have been done hundreds of years ago. The wall won’t be much to look at, Michael admits, and it’s been slow work picking each stone by hand and puzzling the pieces together so there’s no wiggle room at all and everything is level. But “we are really proud and hoping, if we do this right, the stone wall is going to stand longer than the house will!”

He also mentions the couple’s everyday efforts to support “millennial local-grown, sustainable, and small-indie-business efforts” that are “fundamentally built on the idea of returning to a preindustrial relationship with our food, with the objects we own, and with the businesses we frequent.” Anyone who supports those kinds of efforts, he says, is living as a modern Romantic. In fact he celebrates these efforts in his poem “Ode to an Artisan”: “Notice light. Notice in eyes engagéd upon work in the lap — / ’Tis no blind brightness. Instead, it places a warm hand on the shoulder: / Such a gaze! Focus the rising sun’s glory-bent flame cannot e’er match.”

Parke photographed the two of them at the Cloisters Castle in Baltimore as well as in the woods around Frederick, Maryland. Kelsey’s wearing two different versions of the Gothic fitted dress—a self-supporting, tailored piece that was the standard for women of the Middle Ages—as well as an under layer of a white linen chemise, all hand-sewn. Michael is in Elizabethan garb: a hand-sewn ruffled shirt with finger-looped ties, a wool doublet with little slashes (or pinks) to show a white lining layer, and a leather jerkin, also pinked, often worn as an outer layer in the 16th century. “The leather was the most difficult to sew by hand,” he says, “because you have to use a special pyramid-tipped needle called a glover’s needle and have a lot of patience. You won’t be able to tell, but there’s one hole punched in it that’s out of place, where I accidentally punched through both the front and the back instead of just one layer.”

It looks perfect to us, as do these photos of a lovely Romantic couple reading poetry to each other in castles and the forest, even though Kelsey mentions that, in reality, “while we both read a lot, it’s not really anything that special.” 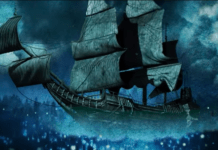