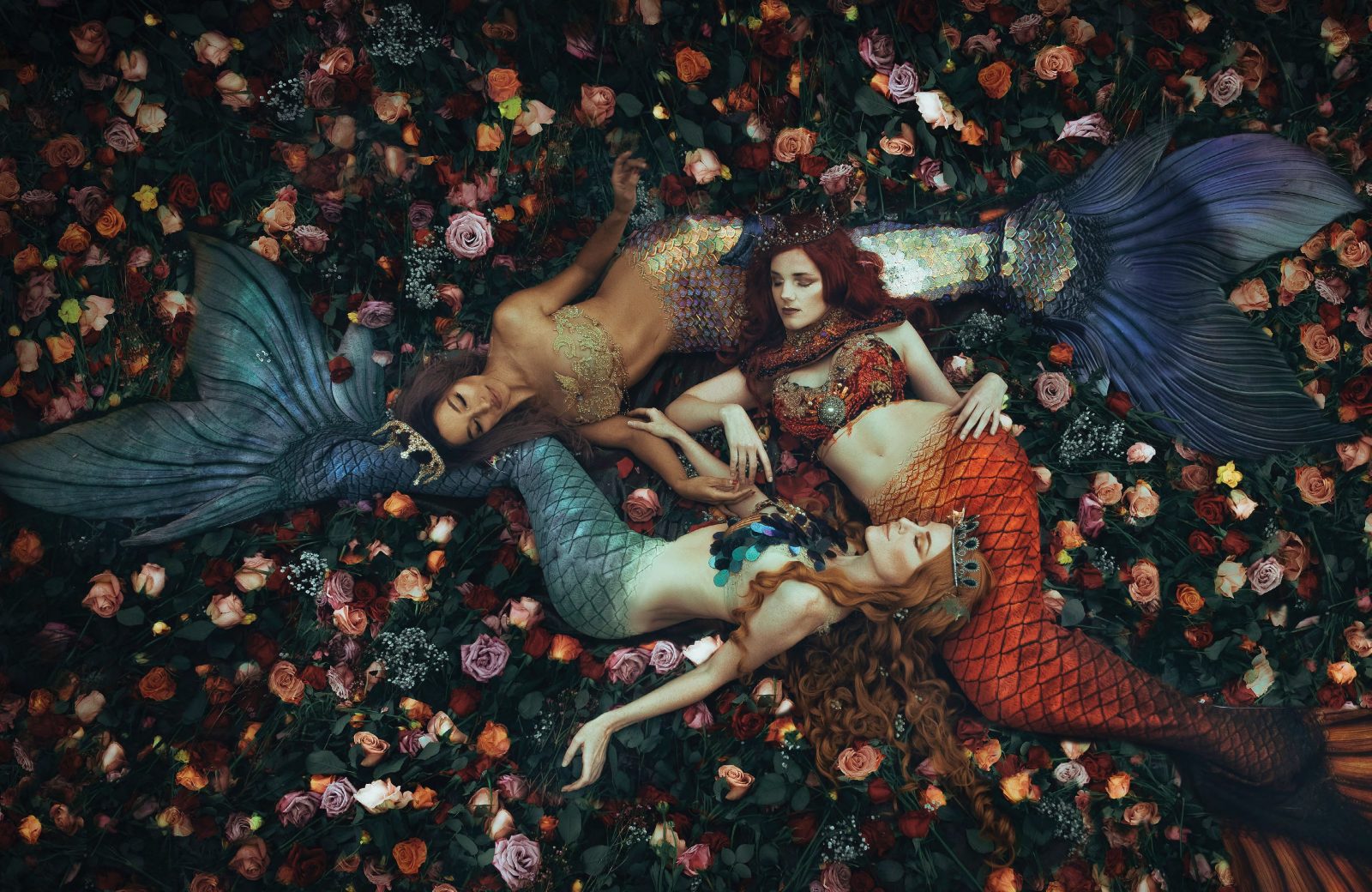 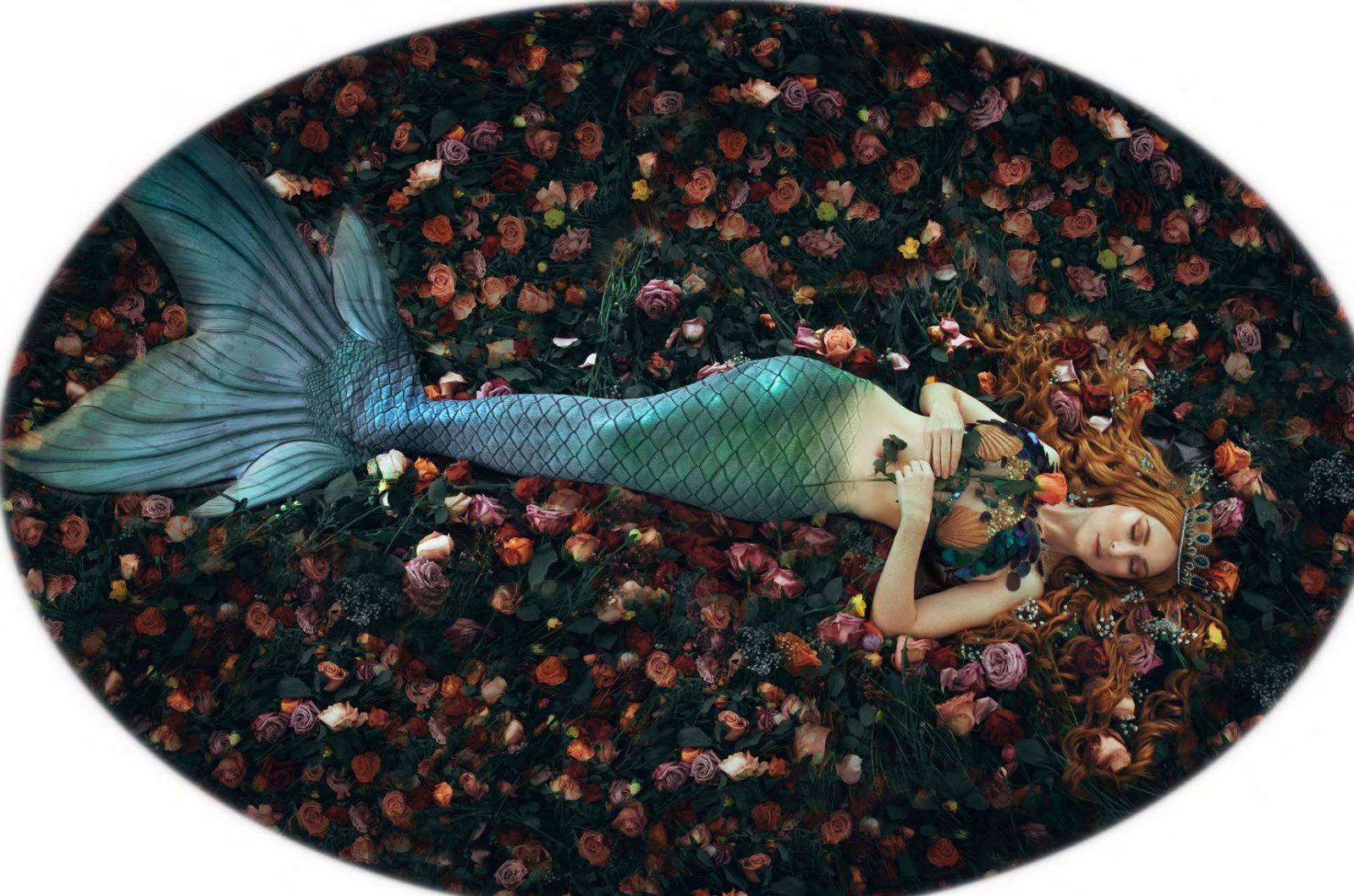 Mermaids are creatures of the ocean who would die on land. Delicate flowers can only survive on land and would break apart and fade into nothingness in the salty ocean. These would seem to make for quite a paradoxical combination, but when the visual of mermaids “swirling in a sea of petals, fragrance, and color” occurred to model and designer Vanessa Walton, she couldn’t get the idea out of her head. She called on the help of two other creative friends, Jessica Dru and Rachel Day, to be her fellow mermaids and asked another friend, Elizabeth Elder, to photograph the collaboration. Dru, Day, and Walton had recently received beautiful new mermaid tails from Finfolk Productions, so the timing was perfect. Each woman was tasked with creating her own mermaid top to match her unique tail. “I was so excited to find the perfect beaded lace for my top,” Walton says. “I pieced it together to look like the fluke of a mermaid’s tail at the center, with a jellyfish swimming just below at each side.” 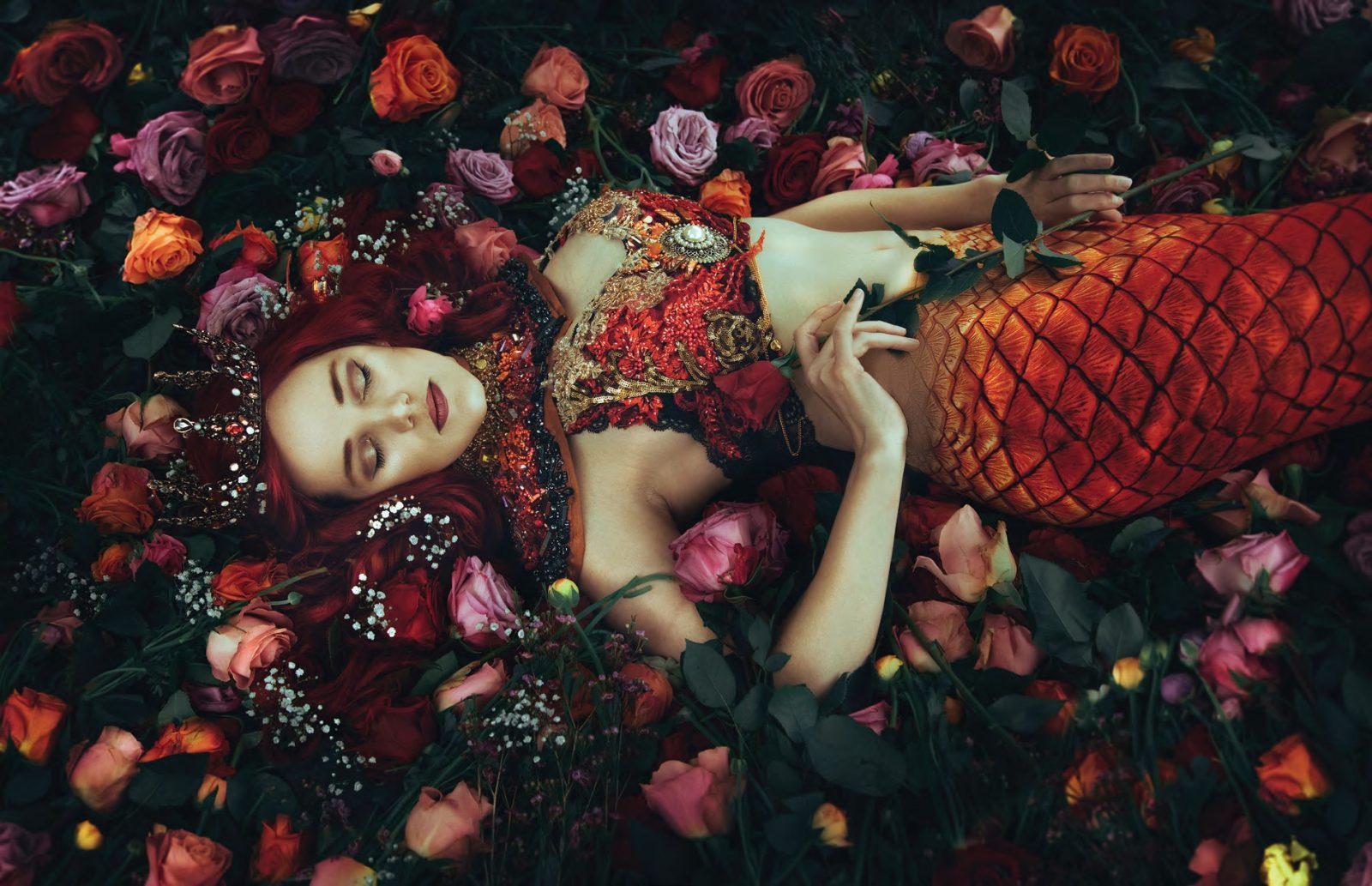 On the day of the shoot, the skies were as murky and dark as a sailor’s warning, but the sirens plunged ahead with their plans. JoEllen Elam of Firefly Path offered to help with the shoot and brought armfuls of flowers with her from the flower market. Roses in a rainbow of colors were paired with ranunculus to create an almost fish-scale iridescence, the fragrance of which was heady enough to turn any mermaid’s head. When the time came to shoot the images, the overcast skies had not lightened, and the rain still fell as heavy as mermaid tears. However, the damp environment worked out in their favor: “It kept the blossoms happy, and added a beautifully dreamy glow to the light,” Walton says. 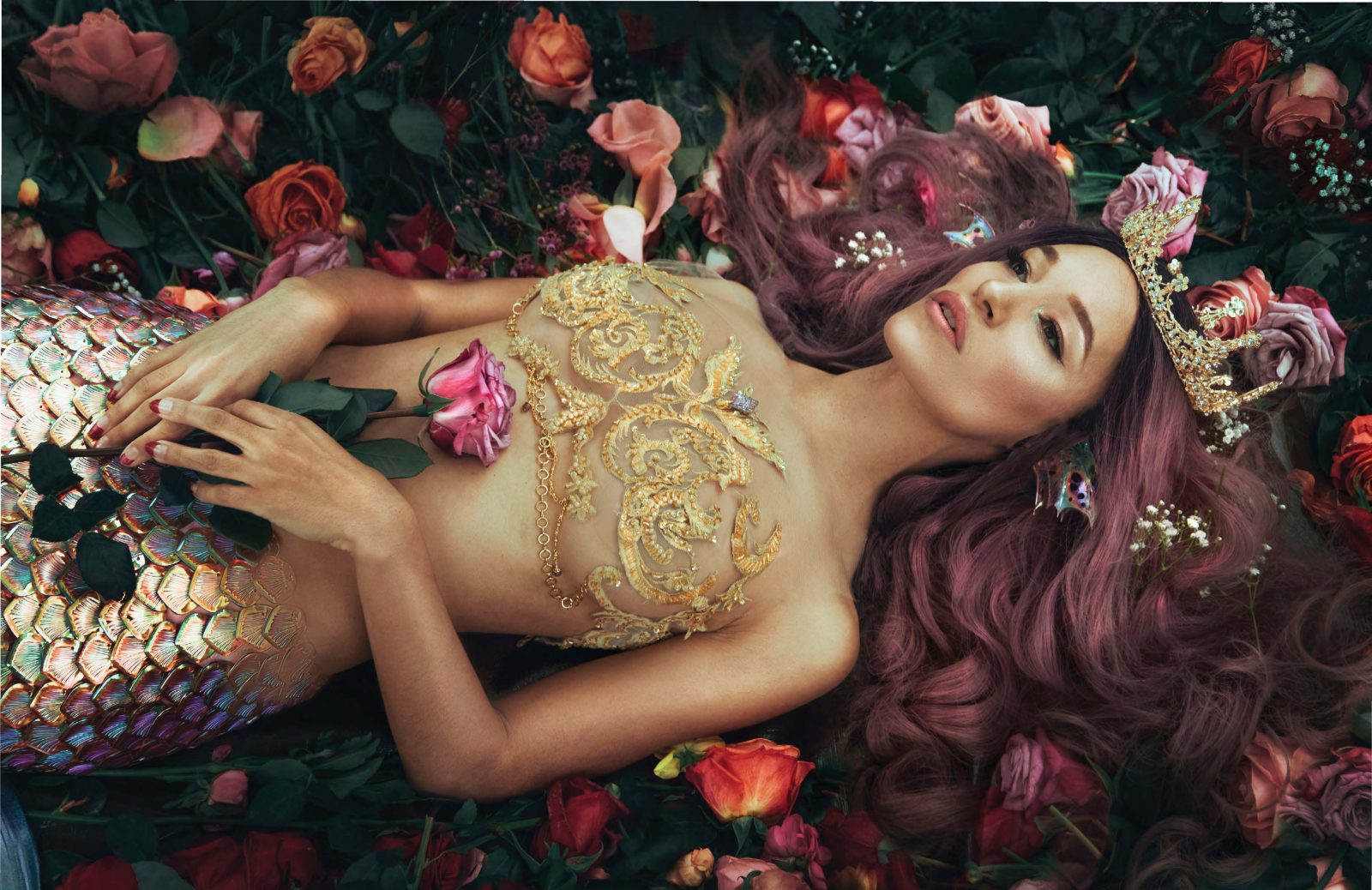 For one final shot, all three mermaids were photographed together, heads resting close together, with tails extending out like an oceanic triskelion. The tent the team had assembled to help protect them from the elements couldn’t be used for such a wide shot. This wound up being the best moment of the entire shoot. “As Jessica, Rachel, and I reclined,” Walton recalls, “faint raindrops began to fall. This special moment was so peaceful and still, as if the sky were giving us the perfect adornment—sparkling droplets of water.”

Sometimes, despite diametrically opposed elements, a story is meant to be told. 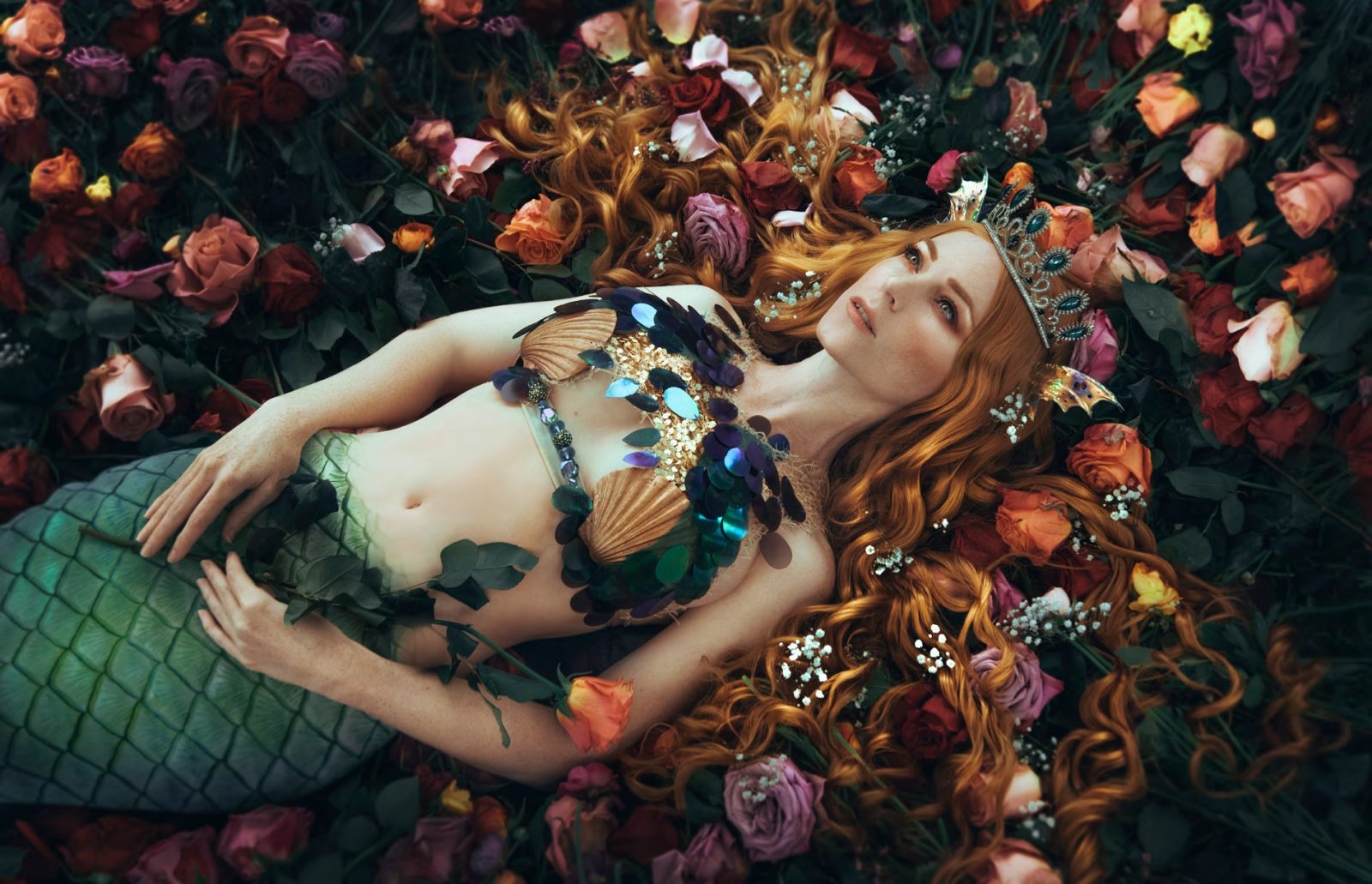 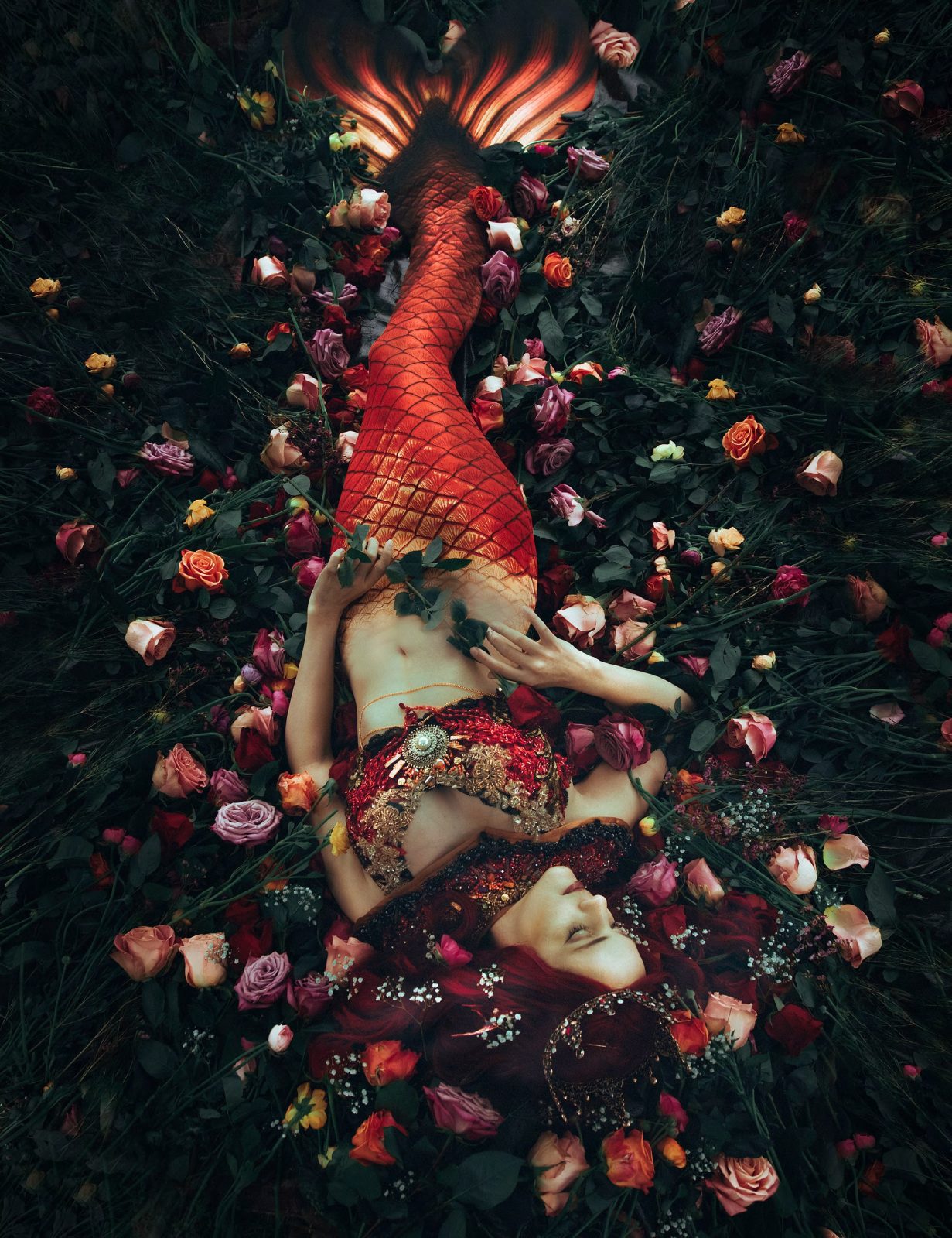 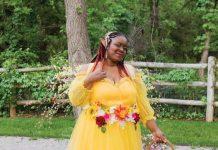