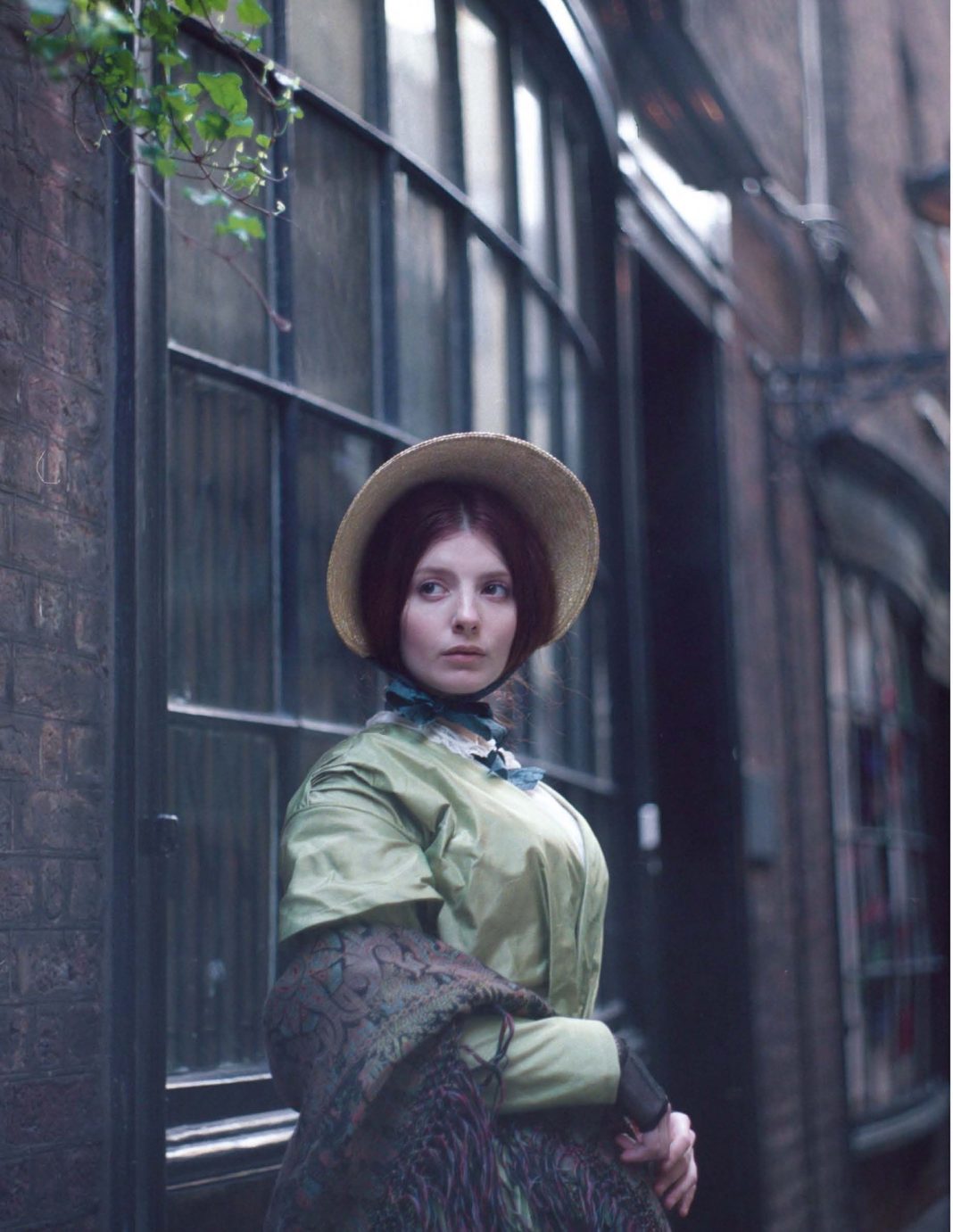 To produce any work on Elizabeth Siddal requires a constant struggle between myth and reality, fact and legend. Most people learn about her through her death rather than her life and achievements. They learn about her relations to men as a muse or lover and not about her as a person in her own right or because of her own art. And they learn about her suffering for art while she posed, shivering in a bathtub, for John Everett Millais’s famous painting Ophelia. Her body of work is small and generally ignored. Her poems have only recently been published without any external (and male) intervention.

These photos are our attempt to reconcile the legend and the person. We aim to show the real working-class woman, the artist, and also the ghostly, immortal beauty of a woman we actually know very little about. According to some sources, Siddal, known as Lizzie in her circle, was “discovered” while working in a dressmaking and millinery shop in London’s dark alleys. Her paternal family has been traced to Sheffield, but by the time she and her siblings were born, the family had already been settled in London for some time. She first sat for Walter Deverell, posing as Viola from Twelfth Night. Jan Marsh, author of The Legend of Elizabeth Siddal, quotes an interesting obituary from 1862 in the Sheffield Telegraph: “Miss Siddall [the original spelling contained two l’s] showed some outlines, designs of her own leisure hours to the elder artist Mr. D.”

The elder Mr. D would be Deverell’s father, who held a position in the School of Design (which also contained a Female School of Design). So it could be argued that Lizzie had artistic aspirations well before she met either Rossetti or Ruskin. It has also been said that her interest in poetry was prompted when, as a girl, she found a poem by Tennyson in a piece of newspaper used to wrap butter with. Maybe Lizzie always loved art and poetry, and entering the Pre-Raphaelite Brotherhood’s studios was a more direct way to engage in artistic production?

Modeling was definitely not a respectable profession at the time—it was often compared to prostitution—so it’s surprising that Lizzie’s parents allowed her to work part time as a milliner and model. She went on to model for Millais and Hunt but by 1853 she was mostly modeling for Rossetti in his studio in Chatham Place. (Now, sadly, a Blackfriars station occupies the place of this building.) From that point on, Rossetti compulsively drew “Guggums”—a pet name Lizzie and Rossetti used reciprocally—and perhaps she expressed her desire to create art as well. We might consider that perhaps Lizzie was so keen on becoming an artist and expressing herself at this point that she risked her reputation by becoming a model to enter the art world.

One of the most remarkable achievements in her life was to become sponsored by the leading art critic of the time, John Ruskin. He paid her £150 a year to produce her art, something not many other female artists of this period can claim. Ruskin also expressed preoccupation regarding her health, often funding her travel for health reasons. This professional relationship did not last long, though; perhaps Lizzie longed for more freedom. She travelled to Matlock, Peak District, and the Sheffield area, rekindling that connection with the north and nature. During her time in Sheffield she attended art classes, reaffirming her desire to become an artist in her own right, far from Ruskin
or Rossetti.

There are periods of time when her whereabouts are largely unknown. After some years of having an on-and-off relationship with Rossetti, he married her in Hastings in 1860, when she was well enough to make it to church. By this time her ill health is often mentioned, although we don’t know what precise ailments afflicted her. After their marriage she suffered a miscarriage, an incident that affected her greatly and allegedly led to her laudanum addiction and depression.

It was the night of February 11, 1862, when she took a fatal overdose of laudanum. Rossetti found her unconscious and could not revive her; several doctors were summoned but she was declared dead at 7:20 a.m. She had planned to dine with Rossetti and poet Algernon Charles Swinburne before, and left home while Rossetti taught night classes at the Working Men’s College. There have been many claims about suicide but none have been proven.

Her story does not end with her death, as Rossetti buried drafts of poems with her corpse and then famously exhumed her body seven years later to recover them for publishing. This prompted many stories of her incorruptible beauty, her ever growing hair and ghostly presence haunting Rossetti, who by this time had suffered several mental breakdowns and was considered psychologically unstable. Rossetti had also been painting Beata Beatrix, one of his most famous paintings, as an homage to his late wife. It depicted Lizzie as Dante’s Beatrice; she had posed for a sketch study before she died.

In recent years there have been considerable efforts to bring Elizabeth Siddal’s artistic work to life, with some exhibitions, books, and plays produced. The series on these pages was shot between London and Catalonia in January 2020, when the Pre-Raphaelite Sisters exhibition featuring her work was taking place in the National Portrait Gallery in Britain. We have aimed to portray iconic and well-known moments of her life but also reinforce her image as a hardworking woman and artist, and show her deep connection with art, literature, and nature. We also chose to depict her addiction and ghostly presence as this legend that has grown around her, a perfect tale of tragic Gothic romance.

Special thanks to Jan Marsh, Serena Trowbridge, Kirsty Stonell Walker, Lucinda Hawksley, Stephanie Graham Piña and many other women who have contributed to academic discussion about Siddal.

Fine art photographer Helena Aguilar Mayans can be found at helenaaguilarmayans.com.
Follow The Seamstress of Rohan on Instagram @theseamstressofrohan