“Go to nature in all singleness of heart … rejecting nothing, selecting nothing and scorning nothing; believing all things to be right and good, and rejoicing always in the truth.”
—John Ruskin, Modern Painters Vol. II (1846)

Jen Parrish-Hill lives in accordance with Ruskin’s advice, going to nature in all singleness of heart. Her home, Frog Hollow, sits nestled within a lush green forest where her particular brand of alchemy is conjured and spells are woven, creating Parrish Relics, jewelry that speaks to the soul.

During the Industrial Revolution, the Pre-Raphaelite artists urged society to look to the past, to emulate craftsmanship of an age prior to mass commercial production. This led to the Arts and Crafts movement, most notably seen in the formation of Morris & Co. by artist William Morris and such associates as Dante Gabriel Rossetti, Edward Burne-Jones, and Charles Faulkner. Morris also helmed Kelmscott Press, where he pursued his vision to create exquisitely crafted books. One of those books, the Kelmscott Chaucer, was famously described by Burne-Jones as a “pocket cathedral.” It’s an apt description, given the painstaking devotion Morris gave to each element of his books. As the architect of these “cathedrals,” Morris constructed each Kelmscott Press book as an example of harmonious typography and illustration. His choice of typeface, balanced margins, and woodcut illustrations all work in tandem to create his signature ornamental pages. In those volumes, appreciative bibliophiles discover the majesty and inspiration of a Gothic cathedral.

A Parrish Relic has the same sacred feel to me as the purity of Morris’s pocket cathedral. It’s more than a mere ornament; it’s the genesis of an heirloom. Parrish-Hill’s research, technique, and her chosen motifs all encapsulate the  spirit of Arts and Crafts innovation and handiwork.

Like the jewelry of the 19th century that absorbed inspiration from multiple periods, Parrish Relics has a stylistic eclecticism. Yet there is a continuity to it, an instantly recognizable fingerprint, unmistakably forged from the essence of Parrish-Hill’s signature magic. Parrish-Hill is a modern Pre-Raphaelite, painstakingly handcrafting her jewelry, paying as much attention to detail as John Everett Millais did in his iconic depiction of Shakespeare’s Ophelia, crafting each petal and leaf with exacting botanical faithfulness.

Her aesthetic evokes an air of otherworldly magic and fantasy. The fact that one of her necklaces was used in the film Harry Potter and the Order of the Phoenix is a true artistic marriage of perfection. A shop filled with Parrish Relics creations is exactly what I’d expect to find if I could window-shop my way through Diagon Alley. Beyond Harry Potter, Parrish Relics have also adorned the likes of celebrities Cher and Alyssa Milano, two women known for charting unique courses when it comes to fashion.

Parrish-Hill’s historical chops were center stage on the hit ABC television series Ugly Betty, via the replica she created of Anne Boleyn’s famous initial B necklace. That necklace has long been synonymous with the slain queen consort of King Henry VIII, but it became a pop culture symbol when worn by the quirky and delightful misfit Betty Suarez. The bold B, with its cascade of three perfect pearls, is now as recognizable a symbol of a spunky female-driven television classic as Mary Richards’s M on her apartment wall in The Mary Tyler Moore Show.

For Tate Britain’s recent Burne-Jones exhibition, Parrish-Hill created limited-edition stained-glass amulets, pictorial pendants, and earrings that were sold exclusively in its gift shop and, unsurprisingly, sold out before the exhibition’s end. Drawing inspiration from the Spes and Fides (Hope and Faith) windows designed by Burne-Jones for Oxford’s Christ Church Cathedral, Parrish-Hill crafted stained-glass pendants honoring the same richness of hue and tone. The shape of each pendant mirrors the Oxford windows precisely, allowing wearers to drape themselves with a Pre-Raphaelite work.

The word shrine denotes something sacred and set apart. It is perfect for Parrish-Hill’s Pictorial Shrine Amulets that celebrate the beautiful women in Burne-Jones’s painting The Golden Stairs. These were also featured at the Tate. The compelling and enigmatic painting is a masterpiece of color and mood but presents no particular narrative; it’s an image of eighteen young women descending a spiral staircase, dressed in diaphanous gowns and carrying musical instruments.

With her limited-edition pieces, Parrish-Hill shone a light on the atmospheric beauty and captivating faces depicted in The Golden Stairs. The painting portrays a mixture of poses; some women look down, while others gaze to the left or right. Parrish-Hill’s Shrine pieces allow individual wearers to identify with different aspects of these women, liberating them from the canvas and allowing them to move about in our world.

The jewelry with which we choose to embellish ourselves speaks volumes. To embrace a Parrish Relics piece is to gravitate toward meaning and sentiment, reflecting our innermost feelings, special memories, or symbols that resonate within us.

Following Parrish Relics on social media is a charming experience. Intricately crafted works are displayed on parchment or historically themed images. A stained-glass amulet the color of a crystalline sky sways in the wind. It’s a rhythmic dance that hypnotizes, sending the message that this piece is no mere bauble. A carefully placed medallion on an emerald bed of moss appears infused with some vibrant sense of the forest that birthed it: the green world of Frog Hollow, willed into existence by a modern Pre-Raphaelite mind, crafted into a prize of bohemian elegance.

Parrish-Hill’s jewelry is often posted with lines of poetry, similar to Dante Gabriel Rossetti’s penchant for writing sonnets to accompany his paintings. The thoughtful presentation creates a synthesis of nature and art. That’s when you realize that Parrish-Hill isn’t merely peddling product. She’s sharing herself.

In a recent post, she introduced part of her new collection, the Lapin, Renard et Fleur amulet. It’s a sweet and poignant pendant featuring
a fox from The Lady and the Unicorn tapestries at the Musée de Cluny in Paris. A portion of the proceeds goes to the group The Fur-Bearers, whose aim is to end the commercial fur trade and promote co-existence with wildlife.

Seeing the fox as a kindred spirit, Parrish-Hill gave him a shy rabbit as a companion. In describing the design, she shares an inner struggle: “Maybe it is because I deal with social anxiety that I looked at the fox from that medieval tapestry with such deep emotion and brought him a friend.” There is strength in that kind of vulnerability.

Devotion to nature and animals is seamlessly integrated into her work and how she chooses to run her company. Her ethics are as important to the existence of Parrish Relics as her choice of materials or subject matter.

Parrish-Hill shares not only her work with the world but also her heart. 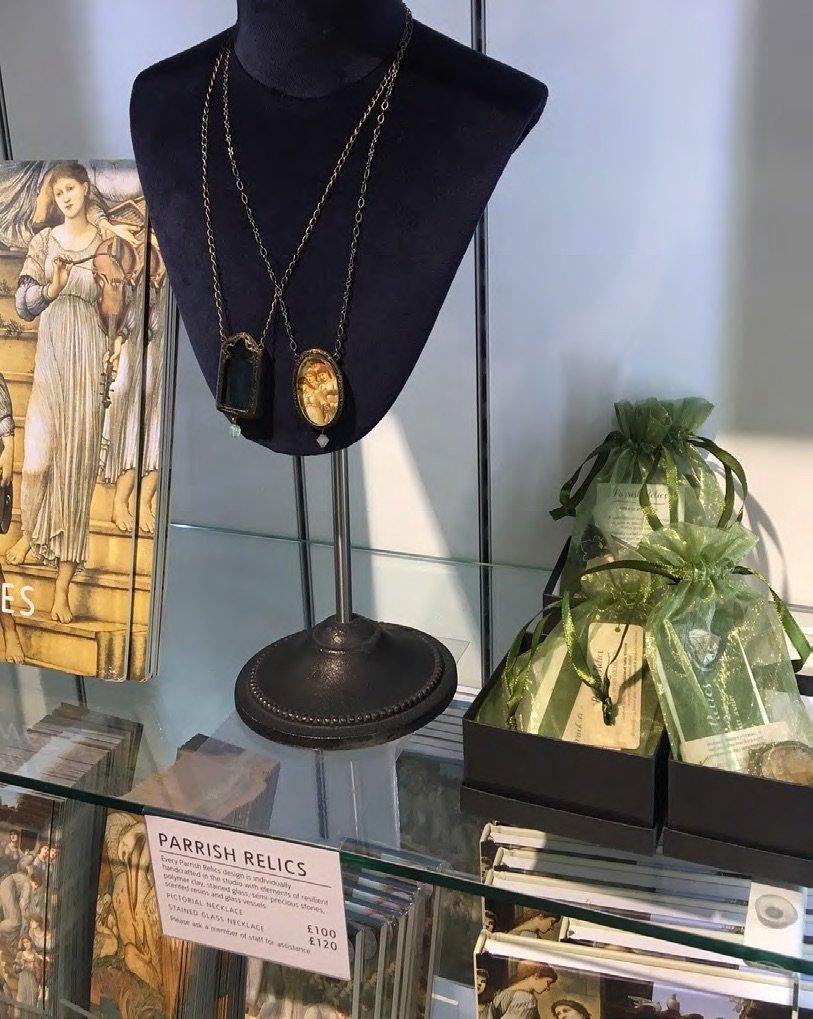 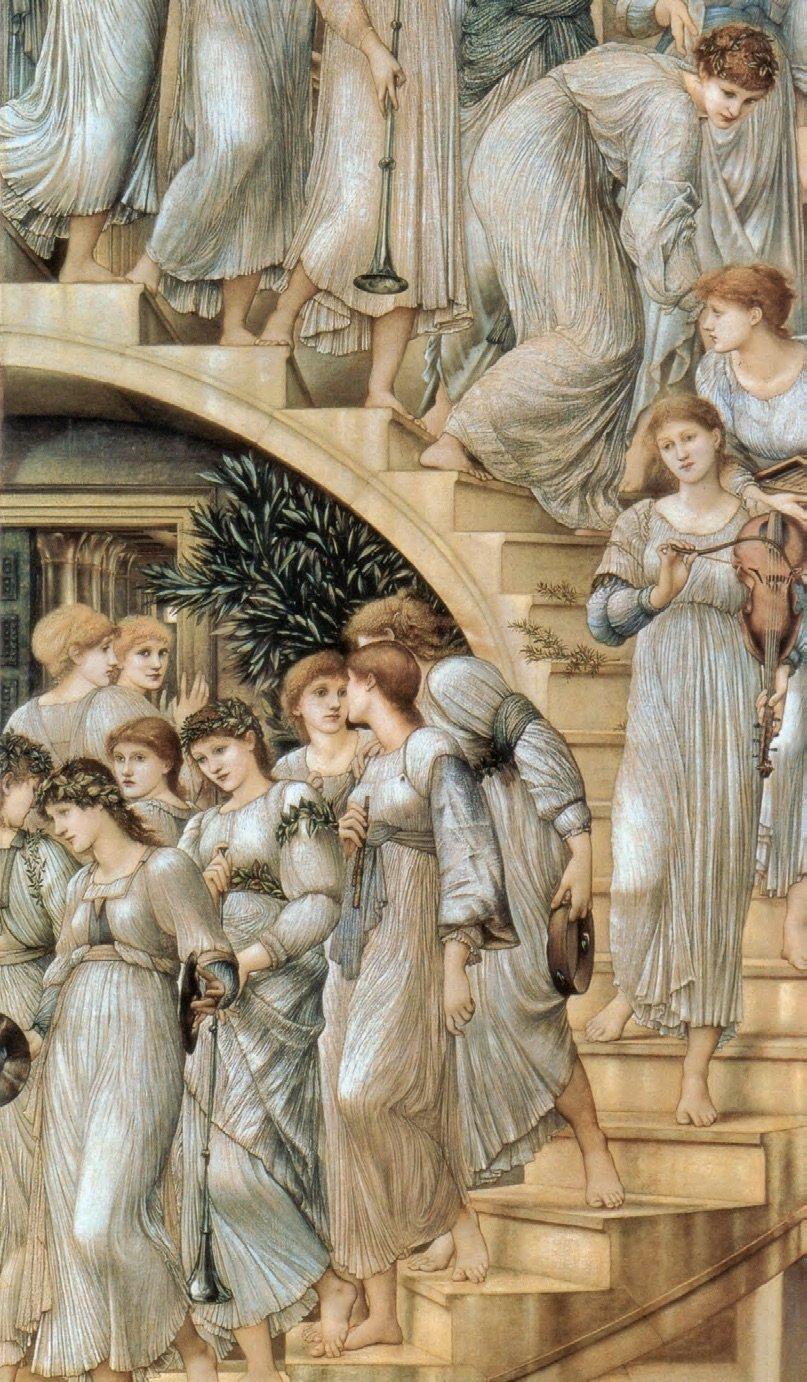 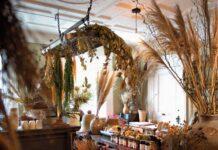