Home Beauty & Style Beauty The Beauty of the Dragon 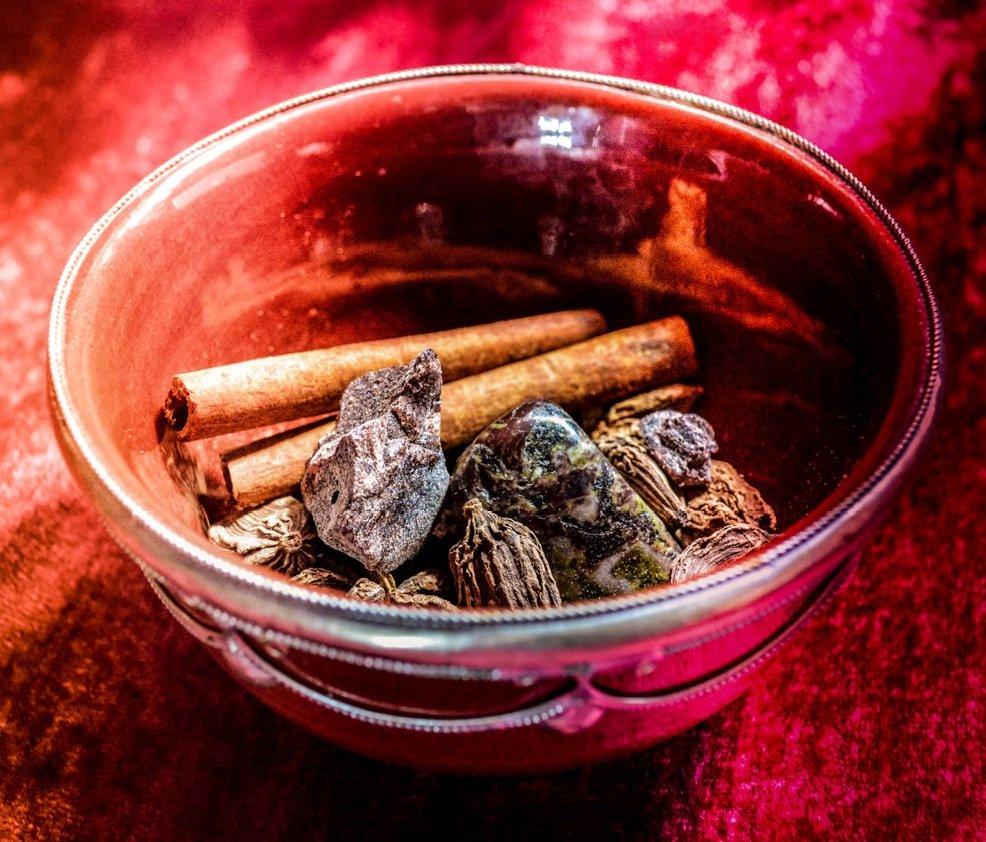 Beyond the menacing physique and legendary ferocity, a deep fascination lies in wait, guarding the treasure that is the dragon. The sinuous tail gives a little swish, causing a rustle among the jewels that sends a stiff shiver up the spine of the beholder. Silence.

And then, the magnificent eye opens its golden crystal gaze.

Fear and loathing throughout the ages have walked arm in arm with a certain curiosity where this incendiary beast is concerned. The ravaging Fafnír, from Norse mythology, has dwelled in the imaginations of children for centuries, depicted as a greedy, ruthless, fire-breathing slayer with nearly impenetrable skin. Quite a feather in the cap of anyone who could rid the land of such a beast. To me, as a child, the dragons were simply misunderstood.

Of course, there were all those tales, dark and foreboding: the terrifying Hydra who challenged Hercules, the stealth Greek drakones that served as the getaway car for the dark witch Medea, and the great Welsh Red Dragon that defeats the White Saxon Dragon right in front of the king (who has to have it all explained to him by Merlin). And then, there was the sanguinary foe in the final battle for an aged and frankly exhausted Beowulf.

In modern folkloric wanderings, our beloved J.R.R. Tolkien has given us dear old Smaug. He’s the greediest of all, isn’t he? And rather lazy. But he remains fascinating. And who among us doesn’t desire, secretly or not, a trio of grand dragon eggs à la Madame Targaryen? The fierce and mystical beauty of these creatures never ceases to enchant.

But tucked in among those famous stories, lesser-known legends of the winged beast await discovery. There are those worshipped by the ancient Chinese, who considered themselves direct descendants of the dragon: These rulers of moving bodies of water and rainfall had control over the weather. The embodiment of masculine yang, dragons were held in high regard as a symbol of strength, power, and good luck for those deemed worthy. This continues today, as benevolent people of high achievement are said to be “dragons.”

Ah! And there are the beautiful dragon sisters, Léana and Léas, of magical lore. They are personal favorites of mine. Léana, with her sliver-white mane, watches over your sleep, keeping nightmares at bay and replacing your fears with peaceful visions. She is never far from her sibling Léas, the Moonbeam Dragon, with her swirling silver sparkles, who can only be summoned during a full moon. (So, please—don’t bother her during any other phase. It’s just bad manners.) I always knew mystical beasts watched over me as a child. After all, they guard the treasure, yes? And they still do. For it is said that a dragon will perch on your shoulder to protect you … if you are willing.

Mes amours, with this strangely halted world we have been experiencing of late, filled with fear and uncertainty, you may be wondering where exactly your own inner dragon fire has gone. It’s time to call in le puissance du dragonne.

I have conjured several potions to help you reconnect with your fire—to feed your passion, instill strength, and raise your power. Allow me to introduce two stunning friends of mine that you really must know: The first is the dragonfruit, a gorgeous little being that you can find in the exotic section of your produce market. But don’t be fooled by its beauty; it possesses the power worthy of its namesake.

Dragonfruit, or pitaya, is indeed a superfood, which always equates with beautyfood. It wields active antioxidants, anti-inflammatory properties, heaps of vitamin C, coveted B vitamins, fiber, and immune boosters. Topically, a simple slathering upon the face as a treatment masque will tighten and revive dull skin, giving you a radiant solar glow. You can even apply it to your scalp, to keep hair smooth and healthy! Magically, of course, it possesses all the firepower you need.

For this dragonfruit sipping potion, I’ve added strawberries to conjure a little Venusian love magic, and pomegranate for an extra shot of fire, all to fuel the fertility of your creations. The almonds combined with the liquids make for a fresher, creamier almond milk than the kind you buy, with the added touch of more bioavailable vitamin E for stunning skin and hair. Cinnamon and cardamom are a sensual fire blend that boosts circulation, provides ample antioxidants, and brings forth power, healing, protection, love, sexuality, and success. Enjoy, mes chéris!

First, slice the dragonfruit lengthwise—you are in for a treat! Once opened, each half will contain a soft flesh, similar to that of a ripe pear, dotted with elegant black seeds of pure life force. Scoop out the flesh with a spoon and remember it, because next time you will buy a few extra and eat them straight from their pretty pink “scaled” hulls. Connect to the energy of its magic. Then add in the remaining ingredients, one at a time, as you visualize your inner fire. Really feel it as you blend all these delights together until the potion is smooth and creamy. I always recommend a high speed, bullet-style blender for all elixirs, as lesser versions don’t properly break everything down. Pour into a sexy cocktail glass and sip, drinking in all the energizing and beautifying powers it offers. You will immediately feel revived, clear, and ready for action! I would concoct this potion during a waxing moon, when you need that push forward, and nearest a full moon for an extra shot of manifesting prowess.

Now for the exterior. A dragon’s exquisitely scaled skin must naturally be treated as the marvel it is, feeding it with moisture to combat all the fiery dryness that can occur (particularly in the heat of summer) while giving it a protective armor that allows for renewal. So my second friend you must meet is none other than dragon’s blood. No, it is not the actual blood of the beast—I would never suggest causing one harm—but rather a resin used since ancient times for healing and magic. As a beauty warrior true to its name, it protects the skin. It also heals damaged skin in a similar fashion to vitamin E, which translates to improving fine lines and wrinkles. Add in the regenerative properties of fire, and you have a most mystical beautifier that adds a certain spark, shall we say. It also carries a rather intense protective magic, as well as one of love and lust, and will increase the power of any spell significantly.

This potion also contains a few more of my favorites: meadowfoam oil, made of 98% fatty acids, is one of the most moisturizing oils you can apply to your skin without clogging pores. It actually crates a barrier that holds moisture in and has a fantastic rejuvenating effect. Pomegranate oil is another potent rejuvenating and repairing oil that not only reduces but prevents wrinkles, with creative magic to spare. Concoct your potion at the new moon, then place it in a windowsill (or outdoors) until the moon is full. Use it daily to ensure a glowingly gorgeous visage.

To begin, place the dragon’s blood into a mortar and grind it to a fine powder with the pestle. Depending on how much you would like to concoct, pour the meadowfoam oil into a glass potion bottle using a small funnel—colored works best to protect the contents—then add in the vitamin E and pomegranate oil, one at a time. As you add the ingredients, feel the potion gaining power. See yourself with enviably renewed skin, and feel how it boosts your confidence to see it in the mirror and be complimented by others! Now add in the powdered resin. Hold the bottle up to the light and watch the resin slowly glide into the oils. Give it a good clockwise swirl, cork or cap it, and place it in a window to receive cosmic blessings. You will want to stir the potion perhaps daily (a skewer works well) to encourage the powdered resin to fully dissolve into the oils. This is also an effective way to keep building the energy. When you are ready to use it, you may wish to strain the blend through cheesecloth to filter out any remaining undissolved resin, though I prefer to use it in its raw form. If you have very sensitive skin, please strain the potion before using.

Beauty Witch Secret: And what would be the ultimate magical power boost? A dragon stone, of course! Dragon stone is as absolutely gorgeous as you can imagine—in its raw form it appears to have scales, and when polished it becomes a breathtaking gray-green entwined with a bold blood red. This magical helper centers on the heart, amplifying the energy of love, power, and courage. It also can manifest like mad. One warning: dragon stone will amplify any energy present, so be sure to feed it strong, positive vibes!

I shall leave you with a petite ritual to connect with your inner mystical beast, one who will protect its treasure with an unequaled presence. May you remain in cosmic light, now and always.

To Call Forth Your Dragon

Conjure. In a beautiful bowl, gather cinnamon, nutmeg, star anise, cloves, and cardamom. You will need to grind or grate them into a powder, using a mortar and pestle or electric spice grinder. First remove the star anise and cardamom seeds from the pods, and if you are using whole nutmeg, crack the shell with a nutcracker. Remove the shell, then grate the soft nutmeg in the same way you would gingerroot. You can also grate the cinnamon this way. (If you prefer, use pre-ground spices.) Once all your ingredients are powdered, mix them well, with the intention of conjuring inner fire, then bring them to a quiet space.

Ignite. Place a charcoal or coconut disk inside a cauldron, then light the disk carefully. Sprinkle a good pinch of incense onto the disk, adding as you like.

Summon. Light a red candle and have your dragon stone present. Close your eyes. Begin to breathe slowly and deeply, allowing yourself to fall into a relaxed state. Open your eyes, and focus on the flame. Ask for the powers of courage, protection, and strength. Feel it build, circling you in a crimson wave of energy until you know it in your heart—no doubts, no fears. With that energy released, begin to ground yourself once more. Allow the electricity in the air to settle, and breathe with your eyes closed for a few minutes until you feel peaceful. You can now snuff the candle, put out the incense, and go about your plans.

Beauty Witch Secret: Coconut incense discs are a sustainable alternative to the classic charcoal censers. They burn with less smoky ash and, unlike self-lighting incense additives, do not harm trees—they are made from discarded coconut shells! Just check your sources carefully, as always.