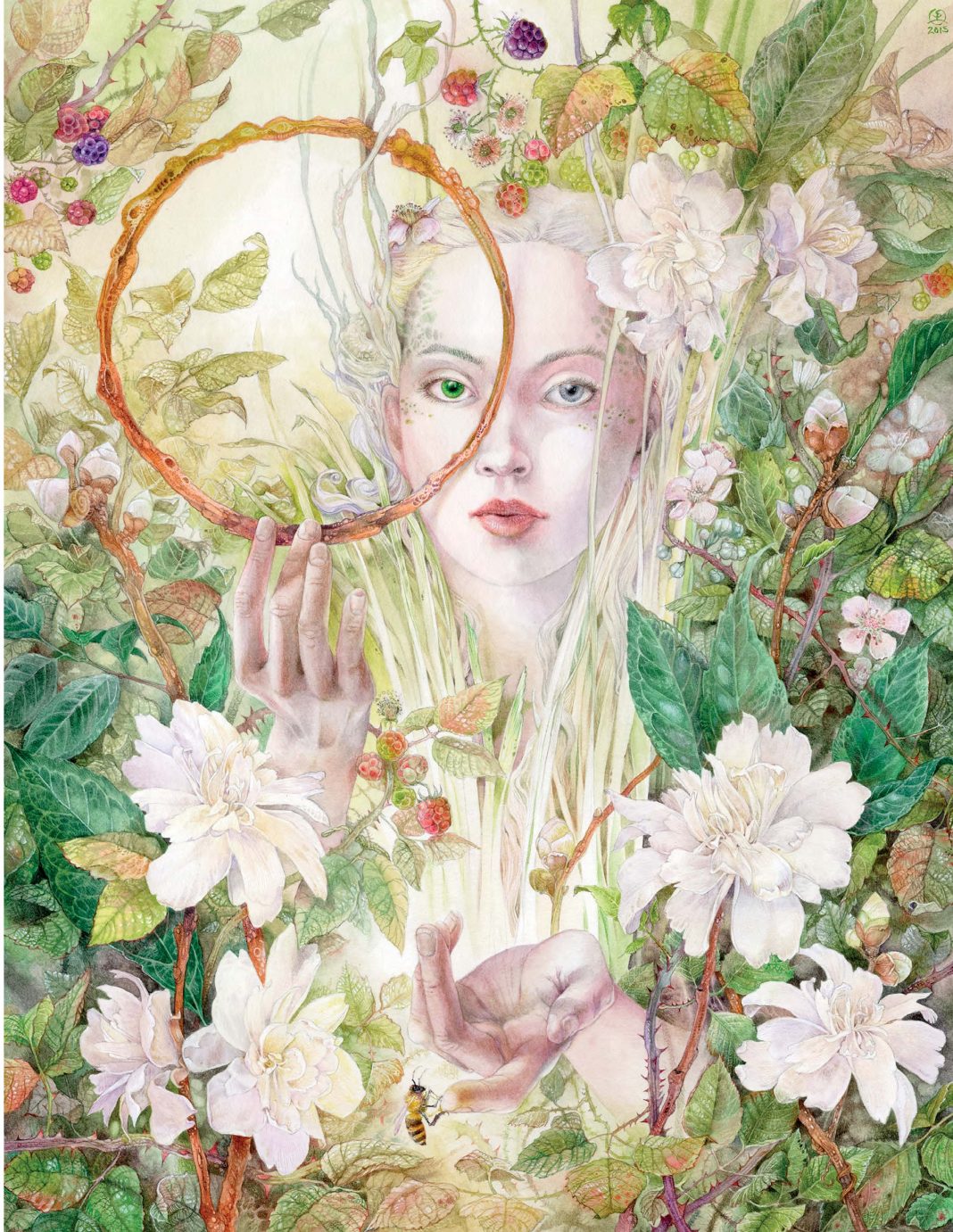 They are ethereal. Supple and airy, with an almost Erté-like fluidity and grace. But the goddesses that Stephanie Law paints also have an earthy majesty the father of Art Deco never bestowed upon his creations. These are powerful women, potent women—depictions of the Thriae, a trinity of pre-Hellenic Aegean bee goddesses. Named Melaina, Kleodora, and Daphnis, they were said to be virginal sisters, nymphs, who made their home in the Corycian Cave’s sacred springs at Mount Parnassus in central Greece. According to legend they are responsible for giving Apollo the gift of prophecy. They were not to be trifled with, these women.

Law, who lives in Oakland, California, found herself drawn to creating visions of feminine fortitude in part due to her daughter, Claire. “I want her to see her own power and to see that strength,” Law says. “I want her to see beyond just the physical-beauty aspect of it, which is difficult sometimes because she’s a seven-year-old and she loves all the pageantry. And so there’s some element of that, but I also want to reveal to her the other elements, the inner power and strength—the power to realize what we desire and to create the existence that we want, to really manifest it.”

The artist loves to play with perception and perspective in her work, examining boundaries like the moments at dawn and dusk when the sun hits the horizon’s edge, creating a green flash, and it is neither day nor night but something in between. Exploring other realms, what Law calls “the boundary that separates what we choose to see and don’t perceive as important,” is another cherished theme. Her daughter’s never-dwindling fascination with the tiny creatures that inhabit the space around her led Law into botanical and insect pieces. Initially frustrated with Claire’s inability on a walk to “get from point A to point B” without long interludes spent gazing at ants marching down the sidewalk or a pill bug curled on her fingertip, Law soon found herself as drawn to this miniature world as her child was.

Before long Law was noticing things she never would have before—the moment the air above her head filled, as if by enchantment, with iridescent red dragonflies, or the way live oaks in the ravine across from her home flow through the space they inhabit, embodying both growth and decay. But it was her work with the bee goddesses that gave her the opportunity to zero in on the insect world. 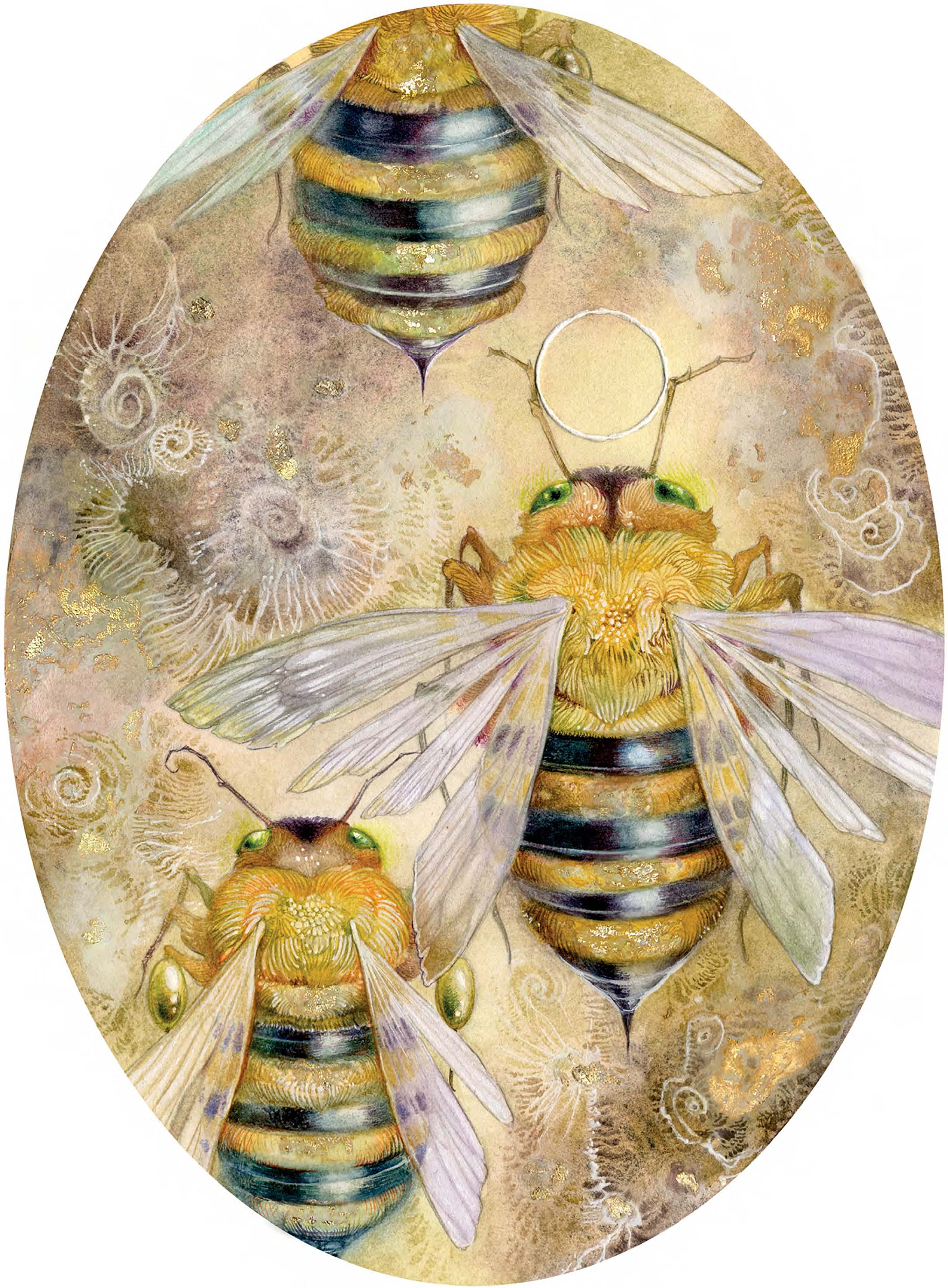 “It really took off when I started doing Daphnis,” Law explains. “As I painted her, that little bee started expanding around her and I thought, What if I made this bee huge? What if I made it even larger, and what is the perspective of that world? I really got drawn into botanical detail as well. Botanical art forces me to take a closer look at things around me that I think I see and appreciate, but once I start painting there are all these tiny details that I never was even aware I was missing, all these little textures and patterns and colors and subtle shifts. It becomes almost this abstracted creation. If I’m holding a fruit, instead of just this fruit I see all these beautiful shapes and forms within it that I never noticed before.”

Law is currently at work on two upcoming solo gallery shows. In June she’ll be featured at Seattle’s Krab Jab Studio; December will find her work at Haven Gallery, in Northport, New York. Fans of her art can also peruse it online at shadowscapes.com, where original drawings, paintings, sketches, lithographs, and her watercolor-technique books, Dreamscapes, can be purchased. (Law has also illustrated a tarot deck, an astrological calendar, and an herbal guide for Llewellyn Publishing, and is featured in Faerie Magazine’s Winged Beauty coloring book.) Alert eyes will no doubt notice another image common to her work: pearls. The artist’s fascination with them harkens back to her childhood, when her grandmother crushed one up and fed it to her.

According to Law, “there was some belief that the pearl would imbue its essence to me—the beauty, the luster, the smoothness. So the symbolism of this is now appearing over and over again in my work, but it’s become more than just those superficial elements that she was trying to impart to me. It’s more this kind of secret inner strength. That’s what the pearl itself embodies now.”

Magic of one sort or another flows through Law’s pieces, including portraits of fairies like Eldritch, a stunning queen bedecked with flowers and feathers. “For me, the fairy realm is everything around me that is unseen,” Law says. “It’s the energy and possibility that lies hidden. Sometimes something will trigger a shift in my awareness and let me see with new eyes these wonders that are ever present. Painting the fantastical and fairies is a way for me to express this magical exhilaration that I feel when a realization clicks, and I suddenly see a connection that I never noticed before. This connection can be a phrase that catches my fancy, or the way reflection and being merge trees and swimming fish into a single realm. Or it can be the ache of understanding the hole left in the world where something used to exist but now is no longer.” 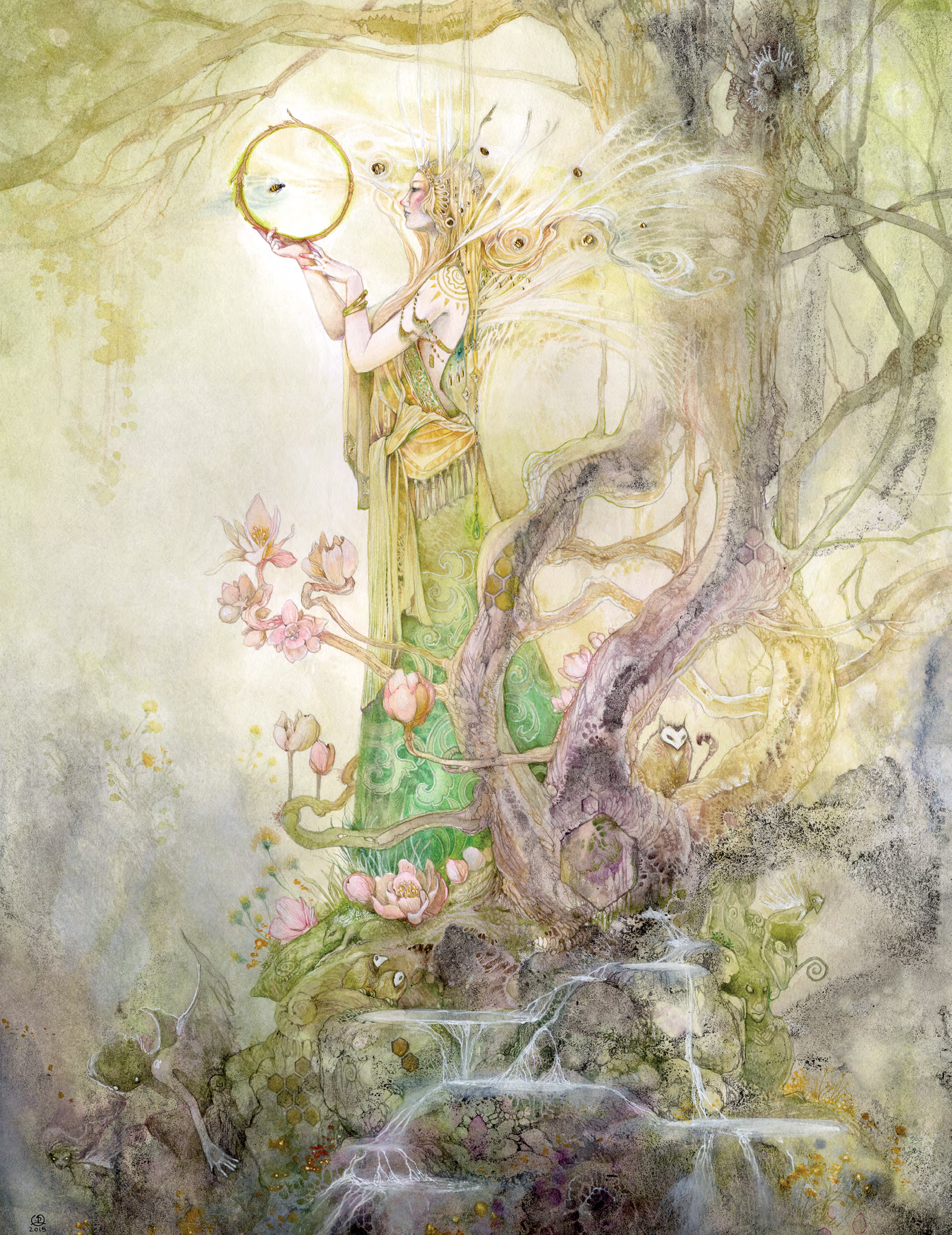