Home Writing The Stories in the Sky 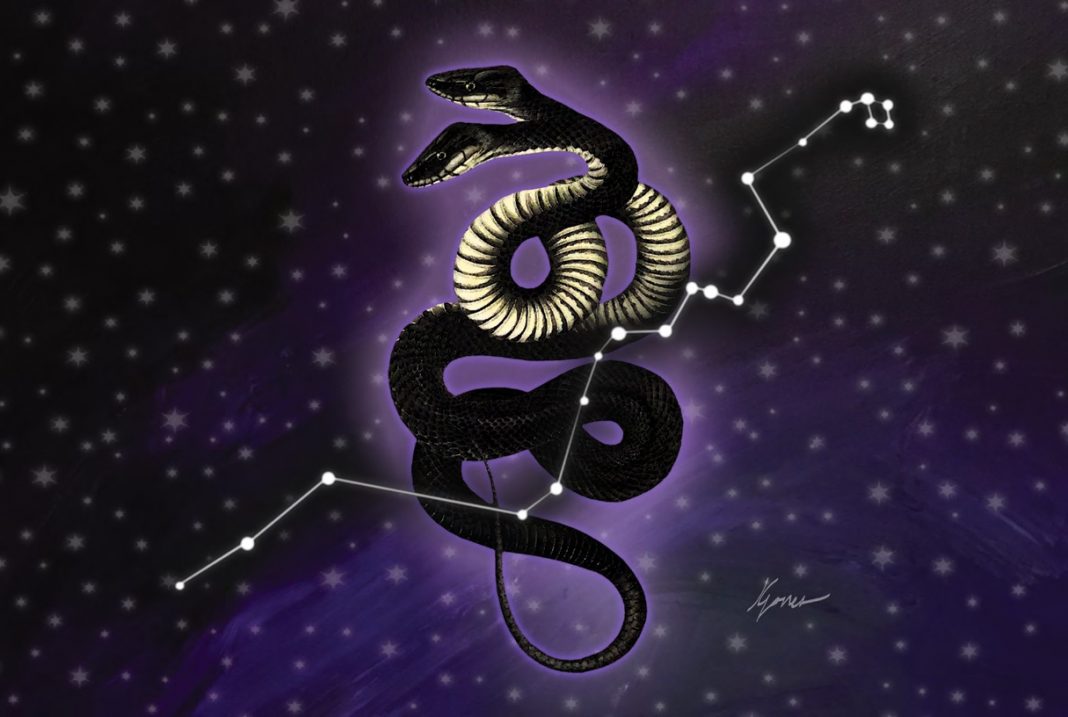 I am a palm reader. Like all occupations, it comes with its set of pros and cons. On the plus side, I have the privilege of connecting with hundreds of people on a deeply personal level to talk about all things in life. But palmistry is an art riddled with misconceptions. The first is that your hand holds the details of your death. Thankfully, this is not true. There are a few hand markings that can be concerning, but an ethical palmist will allow free will to take its course. A second misconception is that all palm readers are psychic. I can’t speak for every palm reader, but I am not psychic, clairvoyant, clairsentient, or clair-anything. I believe the markings on our hands come from the magic that exists energetically within each individual. A third misconception is that palmistry and astrology are related. Wrong. They are two separate modalities of divination that share terminology adopted from the names of stars and planets that are, for the most part, based on Greek and Roman mythology. The ancient Greeks believed constellations were placed in the sky by the Olympian gods (Zeus, Poseidon, Hera, Apollo, Artemis, Hermes, Athena, Aphrodite, Demeter, Hephaestus, Ares, and Dionysus) to serve as lessons on conduct. Whole stories are laid out across the sky; we will examine only a few. 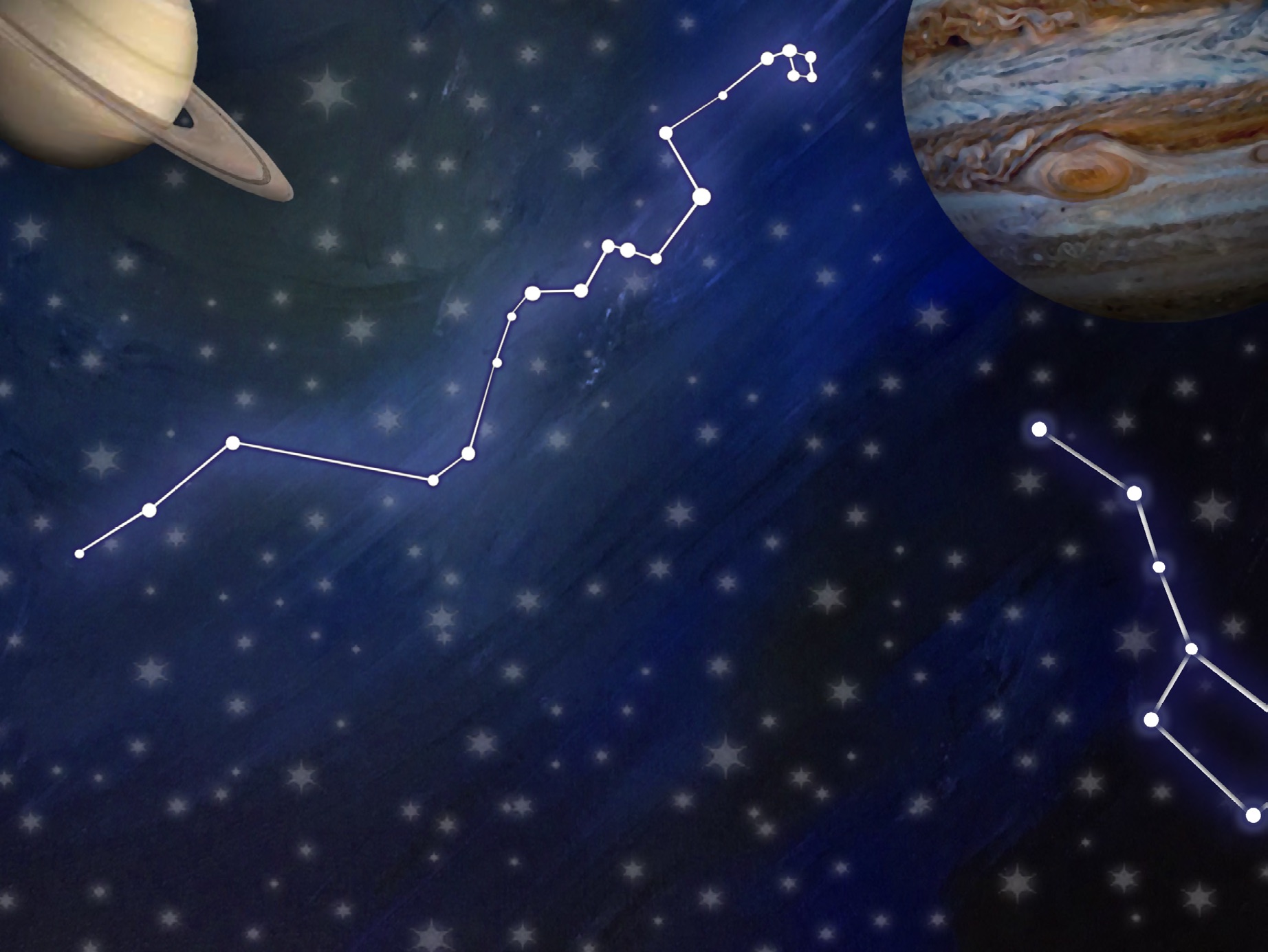 Astrology looks to the movement and position of the planets and other celestial bodies to divine meaning in our lives and events on Earth. The most popular feature of astrology is the zodiac (Greek for “circle of animals”), the ecliptic path of the sun through the sky. Most of us are aware of our rising sign, determined by which constellation of the zodiac the sun is located in on the day they were born.

For example, I was born on July 11 and am a Cancer since the Sun transits the zone of the constellation of Cancer between June 21 and July 23. But where did the name Cancer originate? And why does the constellation resemble a crab? Cancer comes from the Latin word for “crab.” The crab plays a small role in the myth of Hydra, the sea serpent. Hydra, a.k.a. Lernean Hydra, had many heads and poisonous breath. As the story goes, if one of its heads was cut off, two would grow back. Enter the determined Roman god Hercules, who in a gruesome battle cut off all the snake’s heads using a sickle and placed the last immortal head beneath a boulder. Amid the action, the goddess Hera sent in a small crab to distract Hercules; this of course did not work and the crab was killed. The constellation of Cancer lies just above the head of Hydra, the largest constellation in the sky. The sickle is part of the constellation of Leo and is located above Hydra’s neck.

Hydra also rears its ugly heads in other stories, including the dramatic tale of Corvus, the raven, and Apollo, god of the sun and light. Apollo’s pregnant lover, Coronis, was cheating on him with a warrior man. Corvus, Apollo’s sacred bird, notified Apollo of the infidelity and an enraged Apollo sent his sister, Artemis, to kill Coronis. Apollo quickly regretted his actions, traveled to her body, and pulled his unborn son from her womb. The son became Asclepius, the god of medicine. Apollo blamed Corvus for her death and punished the raven by turning his black feathers to white. Corvus was then banished to the sky where Apollo engaged the constellation of Hydra to block the bird from the stars of Crater—a cup—resulting in an eternity of thirst. 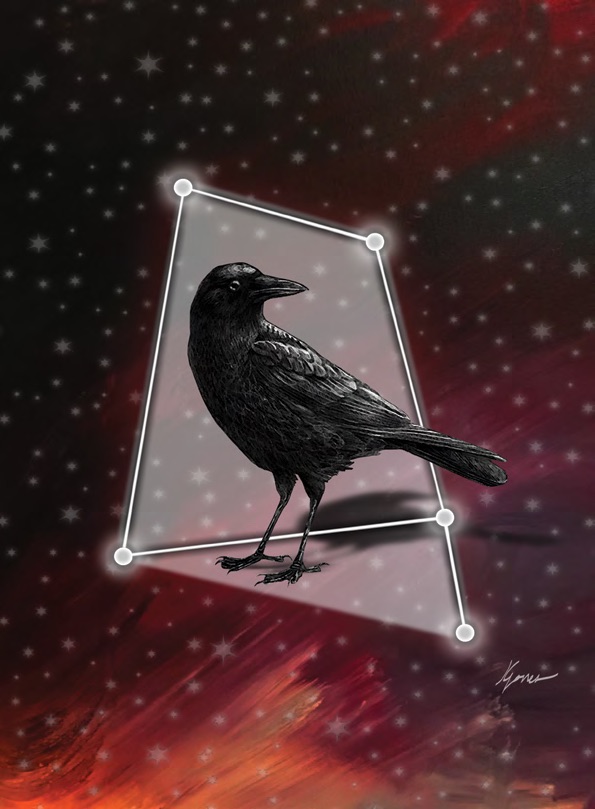 In palmistry, the fleshy pads located directly underneath the fingers and on both sides of the hands are called mounts. Mounts, short for “mountains,” are named after the planets: Jupiter (pointer finger), Saturn (middle finger), Apollo (ring finger), Mercury (pinky finger), Mars (midsection of both sides of the hand), Venus (inside the hand, horizontal to the thumb), and Luna (outer lower hand). Mounts are evaluated by height to determine which archetypes are developed in an individual. What is the tie between archetypes and the planets? Each of the planets are named after gods and goddesses from Greek or Roman mythology. Below are the basics, along with the qualities they represent. To see which archetypes are represented in your hand, go see your local palm reader or find an online tutorial.

Jupiter (a.k.a. Zeus, Gr.): King of the gods. God of the heavens. Jupiter rose
to the throne by overthrowing his father Saturn.
Qualities: Ambitious. Confident. Humanitarian.

Saturn (a.k.a. Cronos, Gr.): Father of the original Olympians who ruled the gods until overthrown by his son Jupiter.
Qualities: Discipline. Balanced life. Strong work ethic.

Apollo (a.k.a. Sol, Rom.): God of the sun. God of archery, music, and poetry.
Qualities: Creativity. Talent in art or business. Appreciation of beauty. Bright disposition.

The Greeks did not believe their gods created the universe. Heaven (Uranus) and Earth (Gaia) came first, giving birth to the twelve Titans (six males: Coeus, Cronus, Crius, Hyperion, Iapetus, and Oceanus, and six females: Mnemosyne, Phoebe, Rhea, Theia, Themis, and Tethys), who then gave birth to the gods. In stark contrast to the omnipotent gods of other cultures, they created their gods and goddesses to be flawed, relatable, and beautiful, like humanity, only immortal. They had no interest in mysticism or the supernatural unless it supported the plotlines of their gods and goddesses. Ironically, astrology wasn’t practiced as divination in classical Greece. The bulk of the tales they wove around the stars described the creation of the universe and other phenomena.

In the second century CE, Claudius Ptolemy, a Greco-Egyptian astronomer and philosopher, published multiple works, The Almagest in particular, that assigned names to forty-eight of the eighty-eight constellations derived from Greek and Roman myths, as well as some Latin derived names. His work formed a large part of the sky mapping of the International Astronomical Union that was developed in 1930 and is still in use today.