Home Writing Fiction The Woman Who Could Talk To Bees
ShareTweet

There once was a small village tucked deep within a forest that seemed made for the dark landscape of October. Maybe it was because the weary town framed itself perfectly under the bare limbs of bigleaf maples that scratched the sky and welcomed the wind that blew away the last traces of summer’s reign. Though most of the townsfolk took to their homes to make peace with the darkness in front of their fires, there were those whose spirits felt akin to the change of light and color. One such girl lived at the very edge of town, where the forest met the river. She and her grandmother kept bees that produced a honey so sweet, it was said to induce salacious dreams that could not be discussed in decent company. They used the wax the bees produced to make candles, rumored by townsfolk to send messages to the spirits of the dearly departed.

The girl grew up wild among the tangled forest. She had no need for the people of town; the deer and the fox were her sisters and the cedar and hemlock her friends. She had no need for a formal education either. Her grandmother taught her how to identify herbs and trees and to listen to the call of birds whose whistles and clicks warned of changes in the weather. She learned to read the shapes of clouds and the direction of the wind. But most of all she learned to work with bees. These bees did not become dormant when the air turned cold but collected pollen all winter long from the flowers that grew in her grandmother’s glasshouse, which was attached to the kitchen. All through the dark half of the year, as the girl helped her grandmother prepare salves or dip candles, the scent of honey and the bee’s constant noise was a reminder that life persisted even during the darkest times.

Sometimes, when the moon was full and the girl could not sleep, she would go to the kitchen for a bit of bread and butter, only to find her grandmother whispering to the bee skeps lining the glasshouse shelves.

One night, curiosity got the best of the girl, so she asked her grandmother to tell her why she talked so secretly to the bees. Her grandmother led her back to her bed, and as she tucked her in, she soothed her with a lullaby the girl had heard many times before:

“Lovely one who lies beneath the rose hips fair, close your eyes as I stroke your hair.In the morning we have castles to make, from the thorny briar where the waters quake. For now, swarming bees will lull your sleep, so, settle your mind, dear, for your secrets, they’ll keep.”

The grandmother kissed the child on the cheek and then whispered in her ear. “Your secrets the bees keep, my dear one.”

And they did have secrets to keep, the girl and her grandmother, because witches must hide, even when living in a town so suited to October’s amber glow. Magic, no matter how beautiful or helpful, was still feared. Yes, there were those who crept to their door at night desperate for a bit of the special beeswax to light a candle that would allow them to speak to a lost loved one, or begging for a few ounces of honey to ignite a passion they’d lost long ago. But those were the same people whose vicious words kept the girl and her grandmother on the outskirts of town.

Years passed, and the girl grew up. It was she who tended the bees all year long now. In the summer they swooped and buzzed and filled the bright landscape with their sweet scent. As autumn approached, they moved into the glasshouse where their lull directed the girl in her craft. And she, in turn, told the bees of births and deaths and her secret desire to fit in with a world she felt so distant from. On some days, she thought her family’s gift felt more like a curse. After a while she resented the bees.

As the woman tucked her grandmother in, she soothed her with the lullaby that had been sung to her as a child.

“Lovely one who lies beneath the rose hips fair, close your eyes as I stroke your hair. In the morning we have castles to make, from the thorny briar where the waters quake. For now, swarming bees will lull your sleep, so, settle your mind, dear, for your secrets, they’ll keep.”

She kissed her grandmother on the cheek and whispered. “Your secrets the bees keep, Grandmother.”

The old woman smiled and, as she began to drift away, said, “Please tell the bees one more secret for me.” She pulled her granddaughter close and whispered in her ear. With tears streaking down her face, the woman nodded and went to tell her grandmother’s secret to the bees.

Her grandmother was buried on the property, in her favorite dress with the gray shawl and next to two other graves, on All Hallows’ Eve. The woman who could talk to bees set up her small cauldron and filled it with alder branches, the wood of the dearly departed. She then gathered beeswax candles and rolled them in the herbs as instructed by the bees. Mugwort, calendula, sage, rosemary, and mullein all pulled back the veil between the worlds of the living and the dead.

It was just before the clock struck midnight that the woman tucked the beeswax candles rolled in sacred herbs into her cauldron among the alder branches and lit them. As the flames grew, the candles melted, lighting the herbs and branches and sending plumes of sweetly scented smoke rising into the night sky. As she chanted the words given to her by the bees, she saw three figures appear in the mist that rolled off the river: her mother, her grandmother, and her great-grandmother, all holding hands as they walked together toward her.

It was all she could do to hold back the sobs as she saw the three witches before her. Three women who had passed down the secrets of magic one to the other and now looked to her with pride. It was at that very moment the woman who could talk to bees realized how very special their gift was and not a curse to be ashamed of. As the fire burned low and the three women began to fade, she blew a kiss to her ancestors, thanking them for their visit. She wiped away happy tears as they disappeared, then turned toward the house knowing exactly what she would tell the bees. 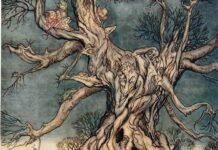 The Witch Behind the Witches