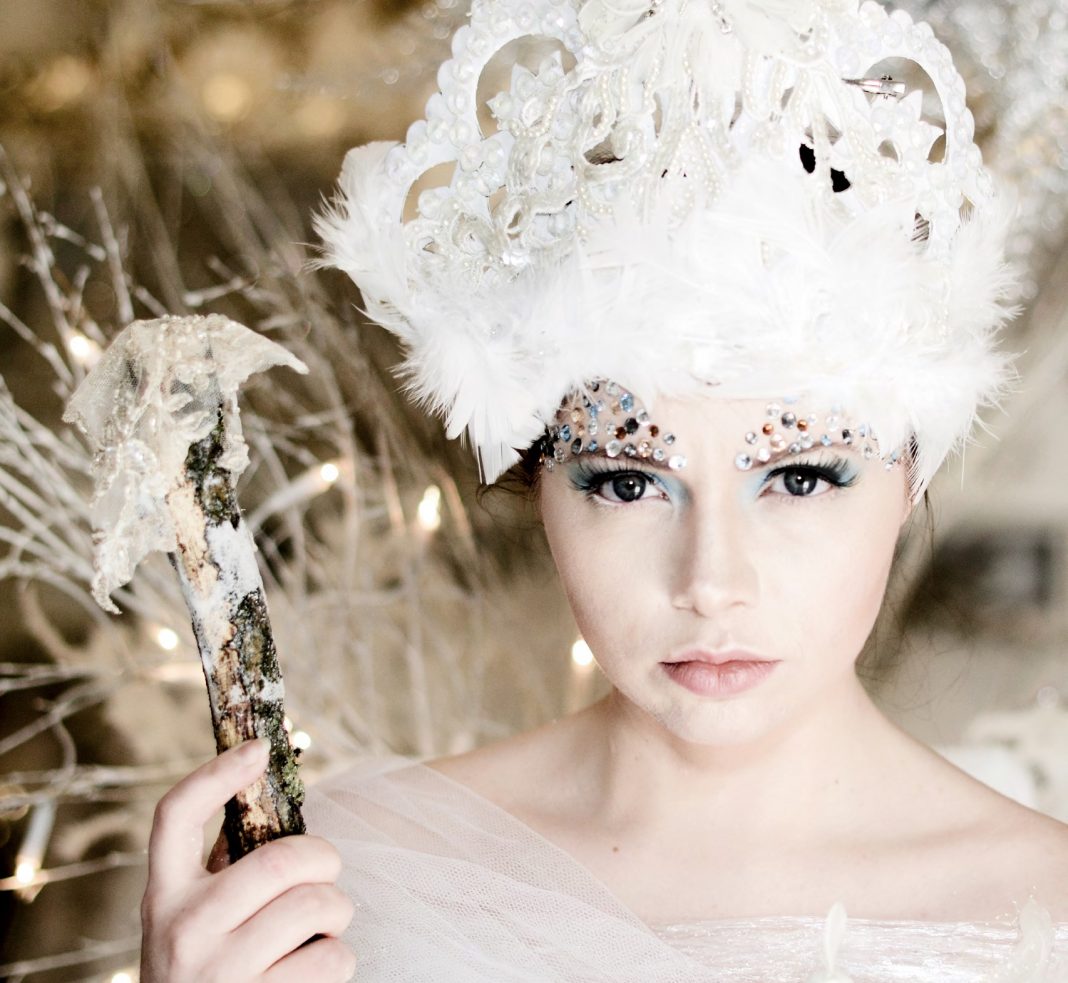 “Often at midnight she flies through the streets of the town, and looks in at the windows, then the ice freezes on the panes into wonderful shapes that look like flowers and castles.”
—from “The Snow Queen” by Hans Christian Andersen

For our “nice” cover [Issue #37], we went to British stylist-photographer Shirlie Kemp, who dreamed up the two gorgeous snow queens on these pages. One is, in the vein of Hans Christian Andersen’s fairy tale, “void of emotion but has a very regal aura about her,” Kemp says. “Her hair feels like a frozen cobweb, backcombed high to make her taller than she is, so to appear more regal. She’s very powerful and doesn’t need the company of many around her, and she loves diamonds.” The other, who stares out sweetly from our cover, is “much softer and kind and will do her utmost to help anyone she can with the swish of her wand. She has the same energy as Glinda in The Wizard of Oz” (though we suspect that she loves diamonds too). According to Kemp, “these two queens tolerate and respect each other, as they are equally as powerful.” 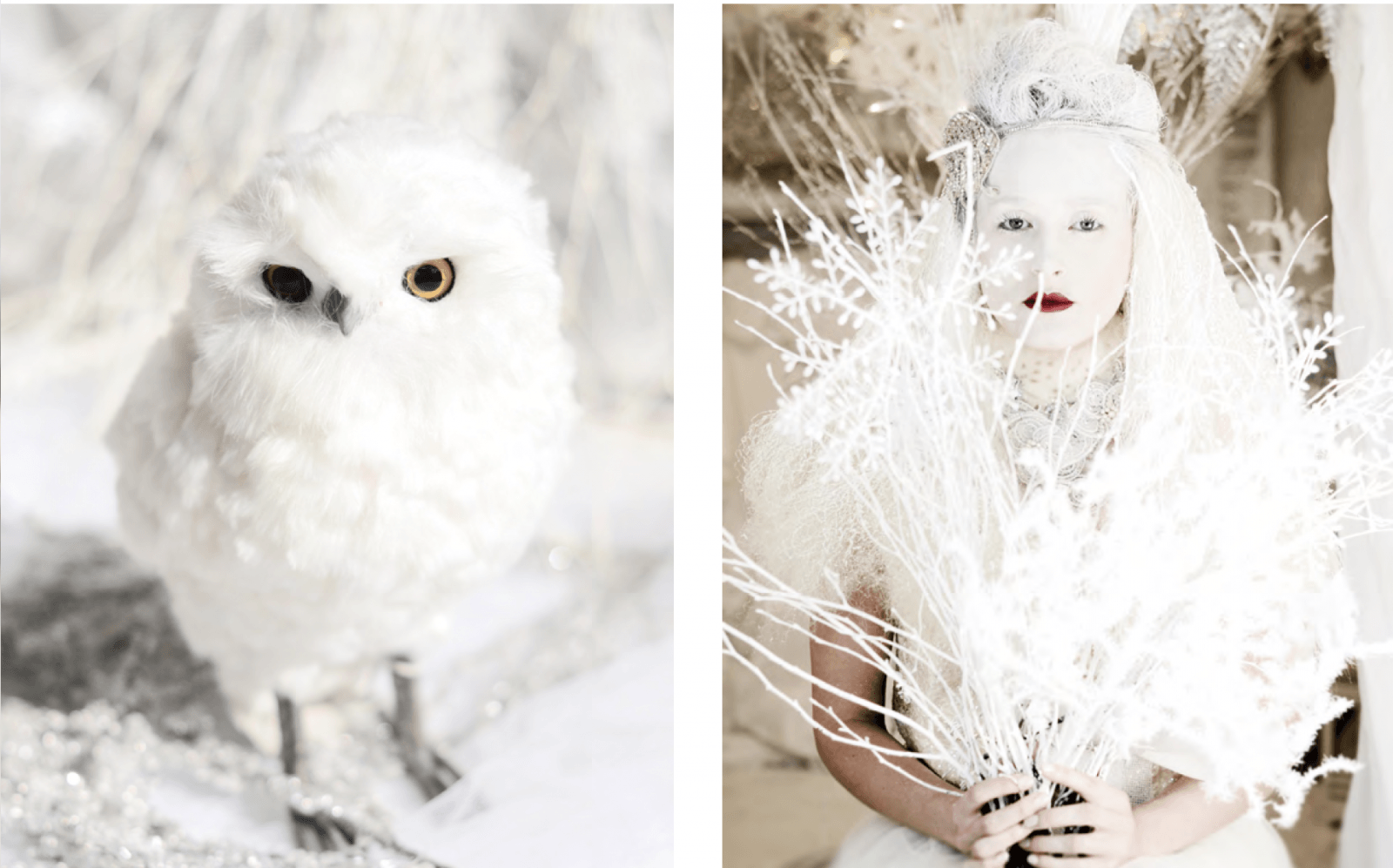 To present these queens, Kemp created a magical all-white set, with a land and time of its own. She dipped into her ever-growing box of goodies, vintage pieces, and crowns. One queen is even wearing a torn old wedding dress from a flea market in Los Angeles. Kemp has been collecting and gathering vintage clothes for years. One of her biggest regrets, she says, is throwing out her collection of designer clothes from the ’80s, including a number of Vivienne Westwood outfits that are now considered museum pieces, so she started collecting again about fifteen years ago. “I love the vintage stores in the States,” she says. “There is nowhere in the world as good as the American stores, so whenever I visit, I spend half my time at flea markets and vintage shops.” 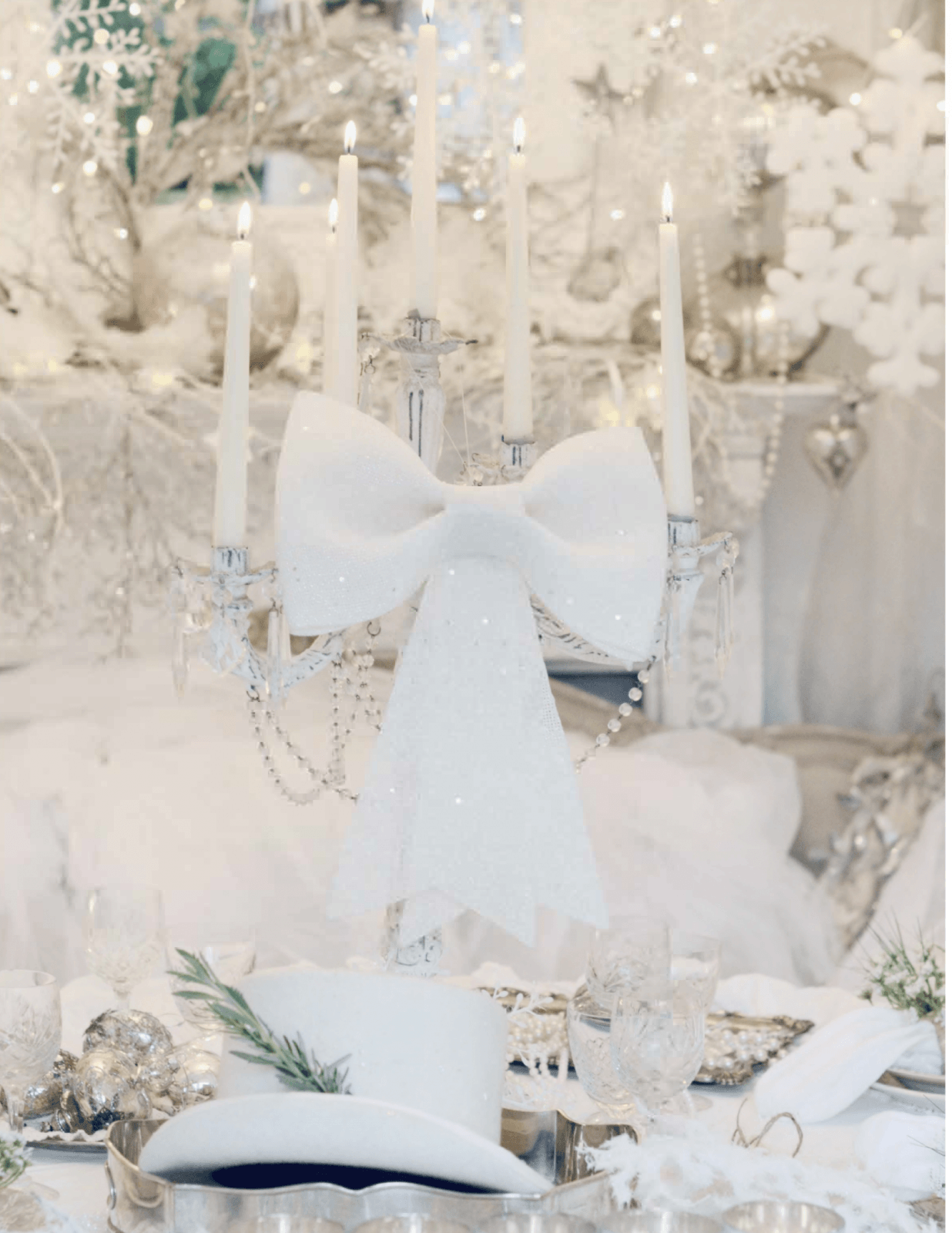 For the shoot she was influenced by her deep love of C.S. Lewis’s snow queen, frosty wintry mornings, and, of course, fairy tales. (As a kid, she would “often be in my own world trying to work out how to unlock my magical powers that I always felt and still do feel are there!”) Her own life seems like a fairy story too. Her first passion was for horses, and she spent a blissful childhood around them until she came down with a bad case of hay fever at age seventeen. Around this time her two school friends were getting a band together and asked her to perform at their first gig. “Little did I know that was going to take off and become one of the biggest bands in the ’80s—Wham!” When Wham! split a few years later, Kemp and “Pepsi” DeMacque created their own act and new images for themselves, influenced by Vivienne Westwood’s “pinky/buffalo style.” And “before I knew it, we were selling our own brand of clothing in Top Shop, one of the U.K.’s biggest clothing stores.” 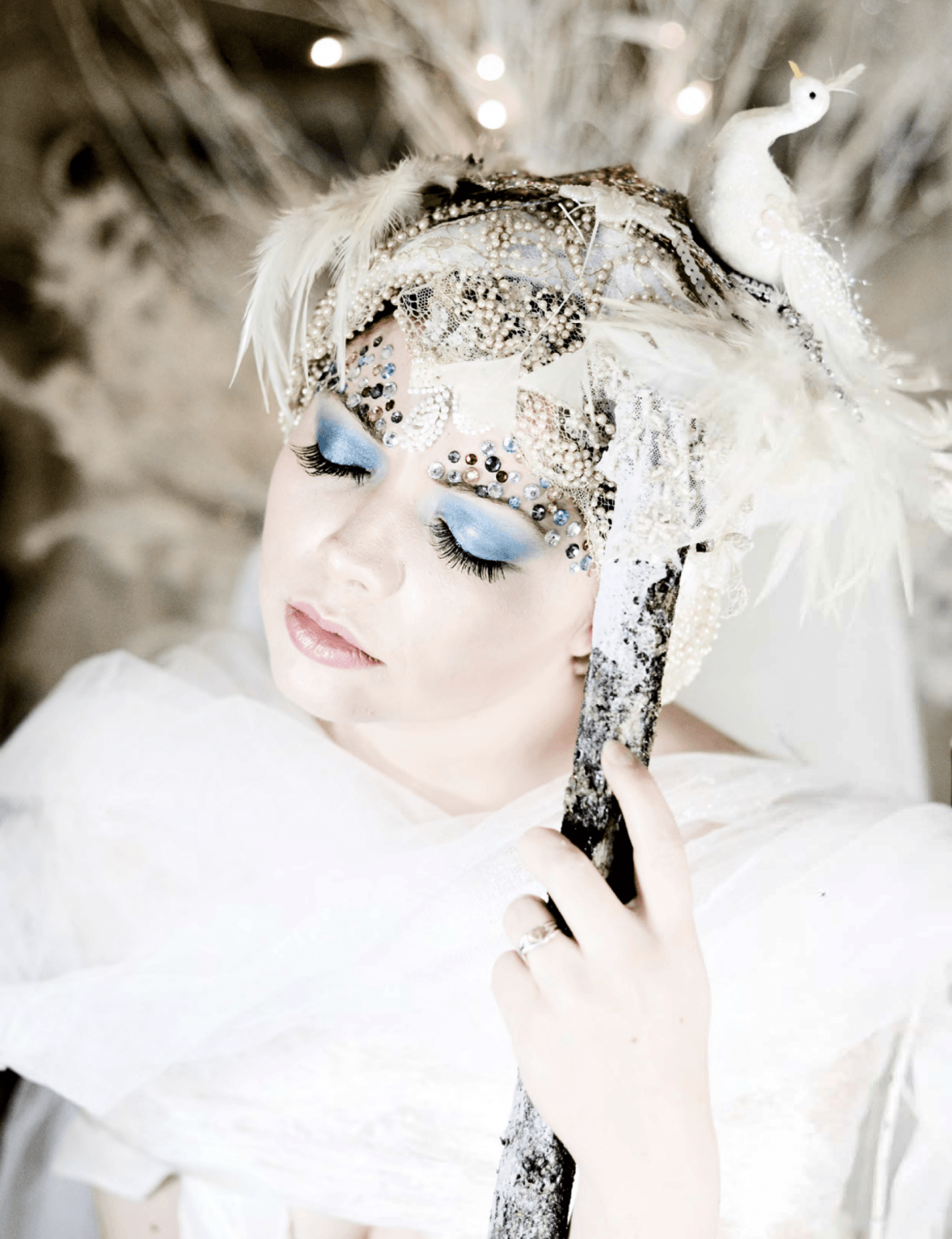 Her time in the ’80s club scene in London continues to shape her tastes. “It was the craziest time ever because everyone looked like they had just walked off of a Gone With the Wind film set. New Romantics were alive and kicking. Their homes were elaborate and renaissance, gothic … It was opulent and anything went!” For her, the ’80s were a time to be “inventive, bold, theatrical, and most of all, unique. I think it’s that experience that gives me a fearlessness to style and create the whole shoot, knowing that everything is an illusion—and I love illusions!”

Her advice for anyone who’d like to re-create this shoot?
“This theme would make a wonderful holiday dinner table far more interesting,” she suggests. “Ask your guests to create their own characters. Maybe they all need to write a little about themselves, write poems, ad-lib the whole evening away. Aren’t we doing that anyway?”

We love the idea and are planning our own wintry soiree right now—look for us among the glitter birds and torn wedding dresses at the local flea market! 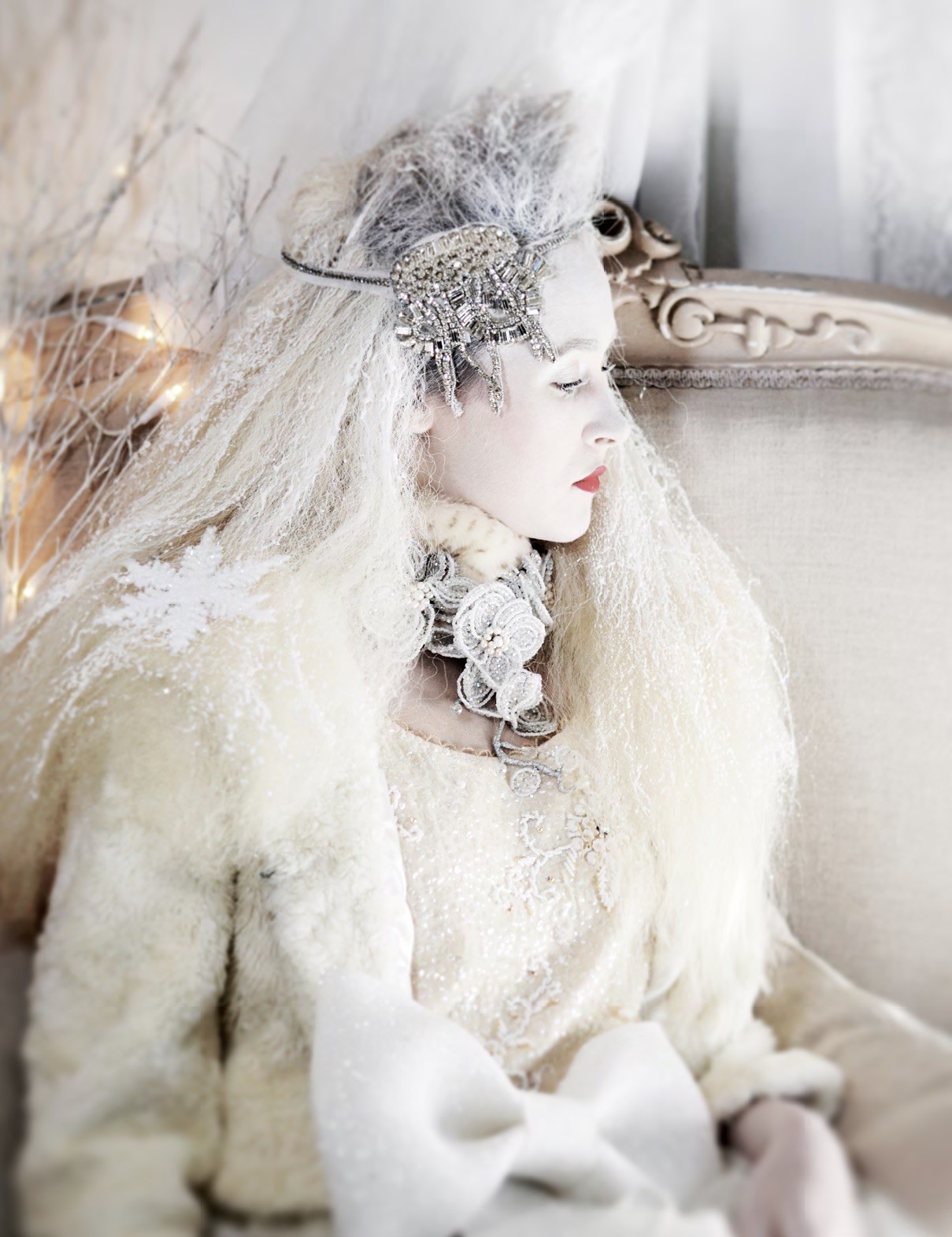 “One evening, when little Kay was at home, half undressed, he climbed on a chair by the window and peeped out through the little hole. A few flakes of snow were falling, and one of them, rather larger than the rest, alighted on the edge of one of the flower boxes. This snowflake grew larger and larger, till at last it became the figure of a woman, dressed in garments of white gauze, which looked like millions of starry snowflakes linked together. She was fair and beautiful, but made of ice—shining and glittering ice. Still she was alive and her eyes sparkled like bright stars, but there was neither peace nor rest in their glance. She nodded toward the window and waved her hand. The little boy was frightened and sprang from the chair; at the same moment it seemed as if a large bird flew by the window.” —from “The Snow Queen” by Hans Christian Andersen