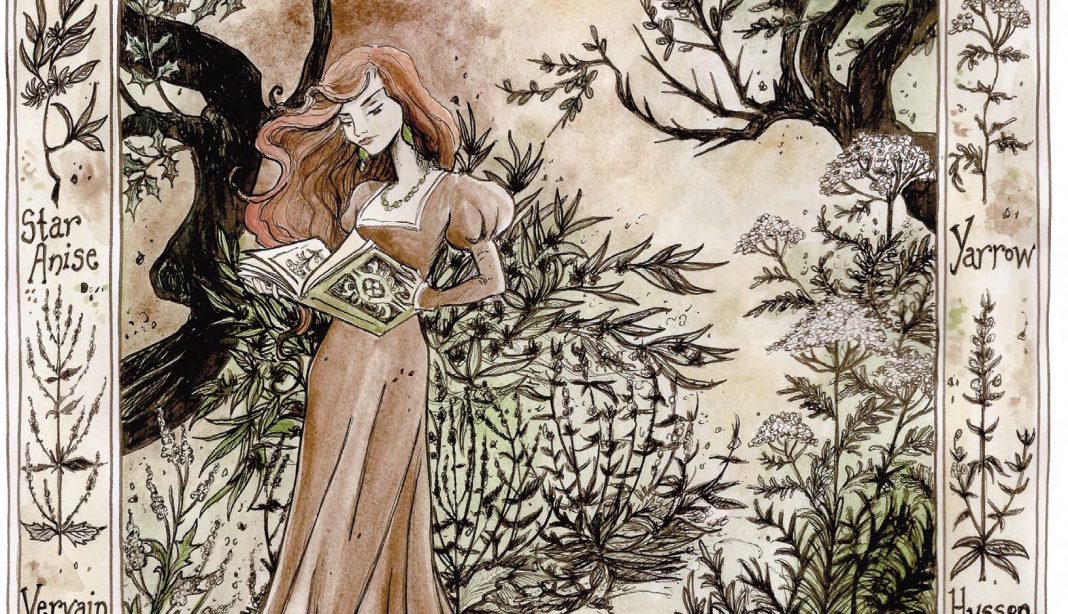 Practical magic is, by its very nature, practical, as can certainly be seen by some of the many, many wondrous herbs mentioned in Alice Hoffman’s The Rules of Magic. Many of the plants in the Owens sisters’ pantry (and repertoire) are common and easily obtained from shops and stores, or grown in your own garden, or can be sourced from the hedgerows—preferably while wearing a wonderful hat and suitably impractical clothing! Any self-respecting witch must also possess a mortar and pestle, appropriate jars and bottles, and of course a book to write any and all recipes in. Why not add your own sketches and drawings of the plants you have been working with as you go along? The tales and folklore of many of our herbs are strange and lovely, and here we’ll look briefly at a few of the herbs found in the book.

Mustard comes in several different forms, but in this case we’ll look in particular at the standard white mustard grains that are often used as a seasoning. When used for magical purposes, mustard is one of the wide range of plants that confers protection and is linked with the ancient physician Asclepius, who was trained by Chiron the centaur. It can be added to incense blends as whole grains, or made into a tea or infusion for sprinkling in the corners of rooms. Garlic, that fiery, much loved ingredient of many different recipes, has long been associated with witches, in particular that ancient witch queen Hecate. It links us with the underworld and can be used in recipes where information from the underworld is required. The ancient Greeks used to place cloves and bulbs of garlic atop piles of stones at crossroads as a gift and meal for Hecate. The Egyptians used to link it with divinity. Later on, there was a belief that when the devil first stepped out of Eden after the fall, garlic grew where his foot fell.

Rosemary is a Mediterranean herb by nature and thrives in hot, sunny spots in the garden with fairly good soil drainage. The bright, zesty scent of the leaves clears the head and encourages direct thinking, lifts poor moods, and has effects on the heart and circulatory system as well, so truly an herb that will do many things! To bring the clarifying effects of
rosemary into your life, try chewing a single leaf to clear the head, or apply a few drops of the essential oil to a tissue and inhale the scent regularly to improve memory. Rosemary brings remembrance, as the old saying goes, and it has long been a funerary herb dropped onto coffins and graves in symbolic remembrance of those who have left us, as well as acting as a token of immortality. It has also been linked with weddings and fidelity. Magically it has been considered an herb of protection for countless centuries, and wreathes and branches of it can be hung around the house for this effect. The dried leaves can be added to incenses, which, when burned, give off a pungent smoke. Sicilian legends reckon that fairy folk hide beneath rosemary bushes. Another old piece of folklore held that where rosemary was dominant in the garden, the woman ruled the house!

Myrrh has been used for both medicinal and sacred purposes for many thousands of years, and the scented resin grains are still a common ingredient in many incense blends. It is linked with sacredness and sanctity and is often used to “set the scene” for spellcraft and magic. Often connected with any kind of work with the shadows and darkness in us, it is linked with death and dying and facilitates the transition between the two and as such can also be used to act as a kind of conduit to the underworld. Often used in divination as an incense, it brings clarity and the link with intuition often needed to divine successfully and was an important ingredient in the ancient Egyptian perfume kyphi.

Star anise has traditionally been used in Japan as an herb for the sacred and is often found on temple grounds and burial sites for this reason. It brings comfort and positive energies, as well as having a protective influence. It is often used as an incense either as part of a ritual or as a way of banishing negative energies and influences from a place. I like to think that it brings bright, cheerful light into a room, much like that of a hearth fire on a cold night. It can be used as part of a practice to transition from life into death.

Mugwort’s long, traditional usage has been as a herb of prophecy and divination, and it has been used as an ingredient of incenses, sleep pillows, teas, baths, and oils, and was originally one of the nine sacred herbs of the Anglo-Saxons. It can be used to bring dreams and prophecies, in particular during divination and in conjunction with lucid-dreaming practices. It can, conversely, also be used as an herb to chase away nightmares. Linked with moon goddesses, it has the energy of a calm, powerful grandmother, like the focus of a hearth fire in the darkness, with stars high above. The use of mugwort both grounds and elevates, helping us reach that point between heaven and earth where we are most at peace and most creative and intuitive. It is a wayfarer’s herb and protects those who journey. 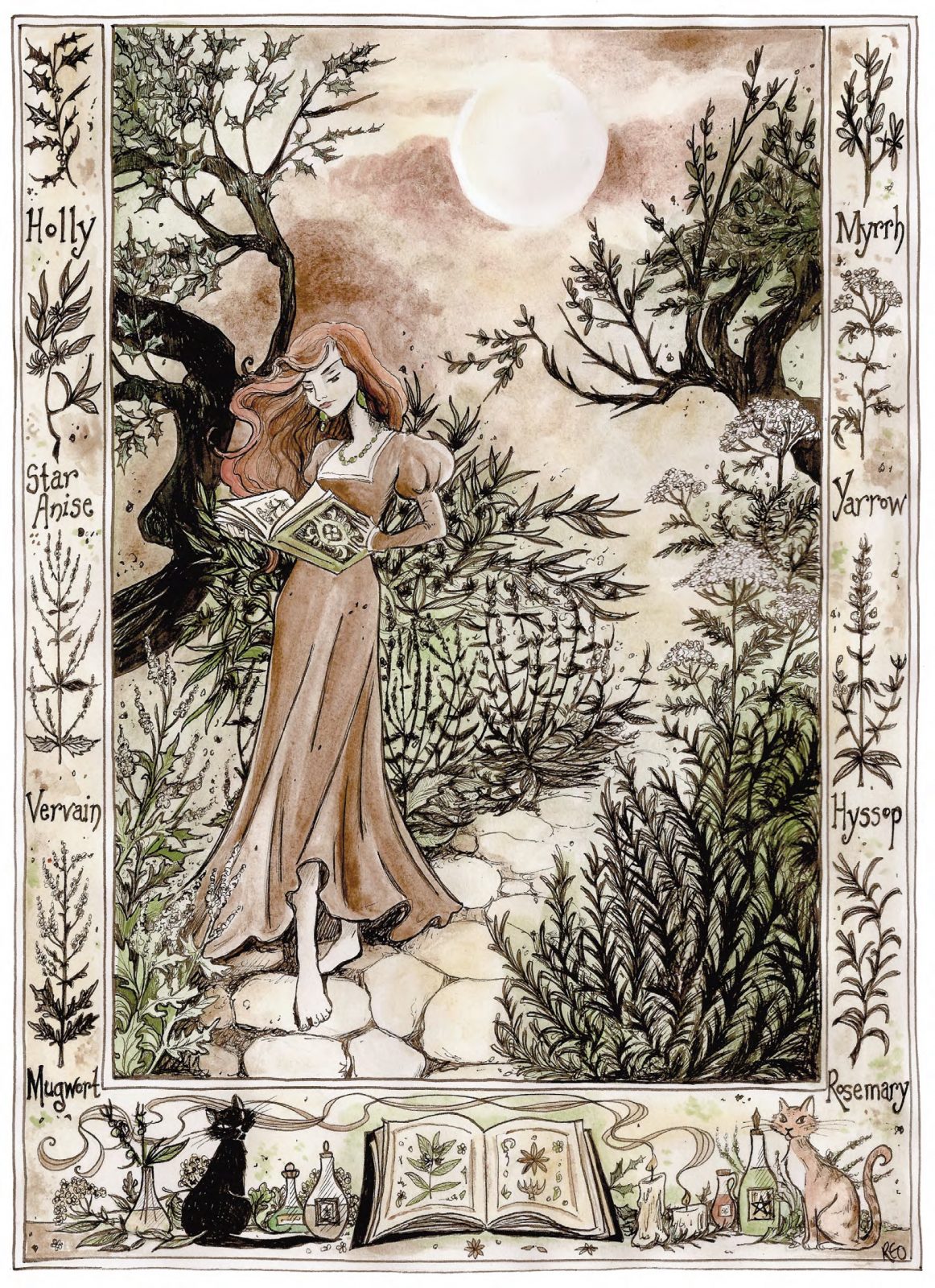 Yarrow is another herb with a long history of both magical and practical uses. Traditionally linked with Chiron and Achilles, it was given to Achilles to heal his wounds on the battlefield. Magically and spiritually it is often used these days as a protective herb to reduce the likelihood of negative energies affecting a person’s psyche. It, like mugwort and vervain, has also been linked with divination, being sewn into sachets and placed under the pillow. The I Ching was traditionally made from yarrow stalks, according to some histories.

Holly is a tree that has long been linked with winter, the Holly King being perhaps the most noteworthy piece of folklore around it. An old wives’ tale reckons that if there are many berries on the holly tree, the winter will be hard, and another old snippet states that bringing holly indoors in the winter will protect the house and bring cheer to it—possibly due to the amount of light that bounces of those beautifully shiny leaves. And of course the points of the leaves themselves are rather off-putting if you snag yourself on them. The druids used to decorate their huts with evergreens to provide a warm place for the local Good Neighbors during the cold part of the year. I leave it to you to decide if this was a good idea or not! When holly is planted outside the home, authors as far back as Pliny have associated it with the ability to deter poisons, lightning, and witches from livestock and homes. It was long held that holly leaves thrown at water had the power to make it freeze, and that splinters of the wood when thrown at livestock would make the animal come and lie down by it.

Hyssop has long had a history of use as an herb of purification, and is often used as a sprinkle or incense to cleanse and clear sacred spaces. It also can be included in incense blends before spellwork. It does have some affinity with the winter solstice and as such can be used in combination with holly. Small bunches of hyssop and holly can be gathered in the summer, bound up with a suitable colored cord, and hung around the home to guard
and protect the abode and all who dwell within it. A strong tea of hyssop can be added to ritual baths to purify and encourage access to the more spiritual self.

And, finally, vervain, one of the most sacred herbs, has traditionally been one of the main herbs used by all sorts of sorcerers and magicians in their rites. It was gathered by the druids for use in their workings as well, most notably perhaps in the creation of Lustral water. It was hung around the neck as a protective herb against snake bites and to bring good luck, and it was also used as a dreaming herb, added to sleep and divination teas and sachets to encourage lucid dreaming and clear divination. It has also long been used as an herb to encourage joy in life, to help prevent a person from being dragged down by their circumstances, and it’s also been included in love potions and rites. Use vervain to encourage and foster creativity and intuition.

Rachel Oakes resides on the outskirts of the historic city of Cambridge, England, and divides her time between sculpting fantastical figures wearing sumptuous velvets and silk and drawing lush illustrations often inspired by her love of folklore, period films, and literature. Her Enchanted Oaks collection can be found on Etsy @ etsy.com/shop/enchantedoaks.