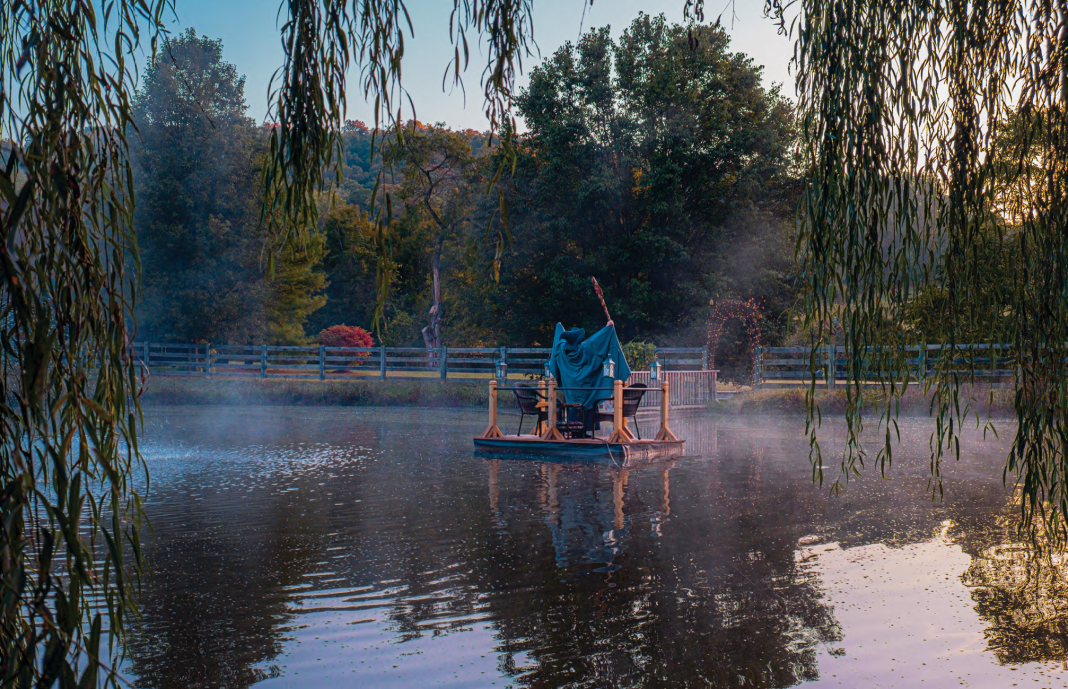 There is nothing left undone here, no detail overlooked. Hobbit’s Dream—as Randy and Linda Holland, the proprietors of this most unique property, have christened it—is as ideal a hobbit hole as might be found anywhere. And that includes Middle Earth. Tucked away beneath the rich, loamy soil of the Shenandoah Valley of Virginia, this underground dwelling is accessed through a perfectly round, porthole-like double doorway. Immediately inside, an intricate, red-tailed dragon is carved into the floor; beyond sit two old-fashioned, overstuffed armchairs alongside a stone fireplace. To the left is another circular entryway, leading to the kitchen, which is mirrored on the right by an entrance into a cozy bedroom. Everywhere you look—everywhere—are bits and bobs inspired by J.R.R. Tolkien’s masterworks.

Here hangs a map of Middle Earth, battle axes, a Warg skin. There sits a spinning wheel, a feathered quill, herbs spilling from glass jars. Serpentine vines twist over wall sconces, a heavy ceramic jug bursts with sunflowers. Dried corn cobs and bunches of berries drape downward from the eaves above the front doors, alongside gourds, a Warg skull, and antlers. Cheery fairy lights twinkle among everything. Even the toilet-paper holder in the bathroom has been carved with the face of a wizard. It’s not surprising that for those who love Bilbo, Frodo, and friends, entering this enchanted space can be an overwhelming experience. “Probably at least once a week we have guests that cry when they come in,” Randy Holland says. “We have The Hobbit theme playing when they arrive, and they’re so emotional that when they step over the threshold they can’t help themselves. They break down.” The Hollands got the idea for Hobbit’s Dream, which may be reserved through Airbnb, from their son, Jeremiah. He owns a tepee not far from his parents that he rents out though the platform. When Jeremiah would periodically ask his guests what other unusual type of dwelling they’d most like to stay in, the answer was often a hobbit house. While few people might want to build a Tolkien-themed guest house, much less have the skills to do so, the project was a perfect fit for the couple. 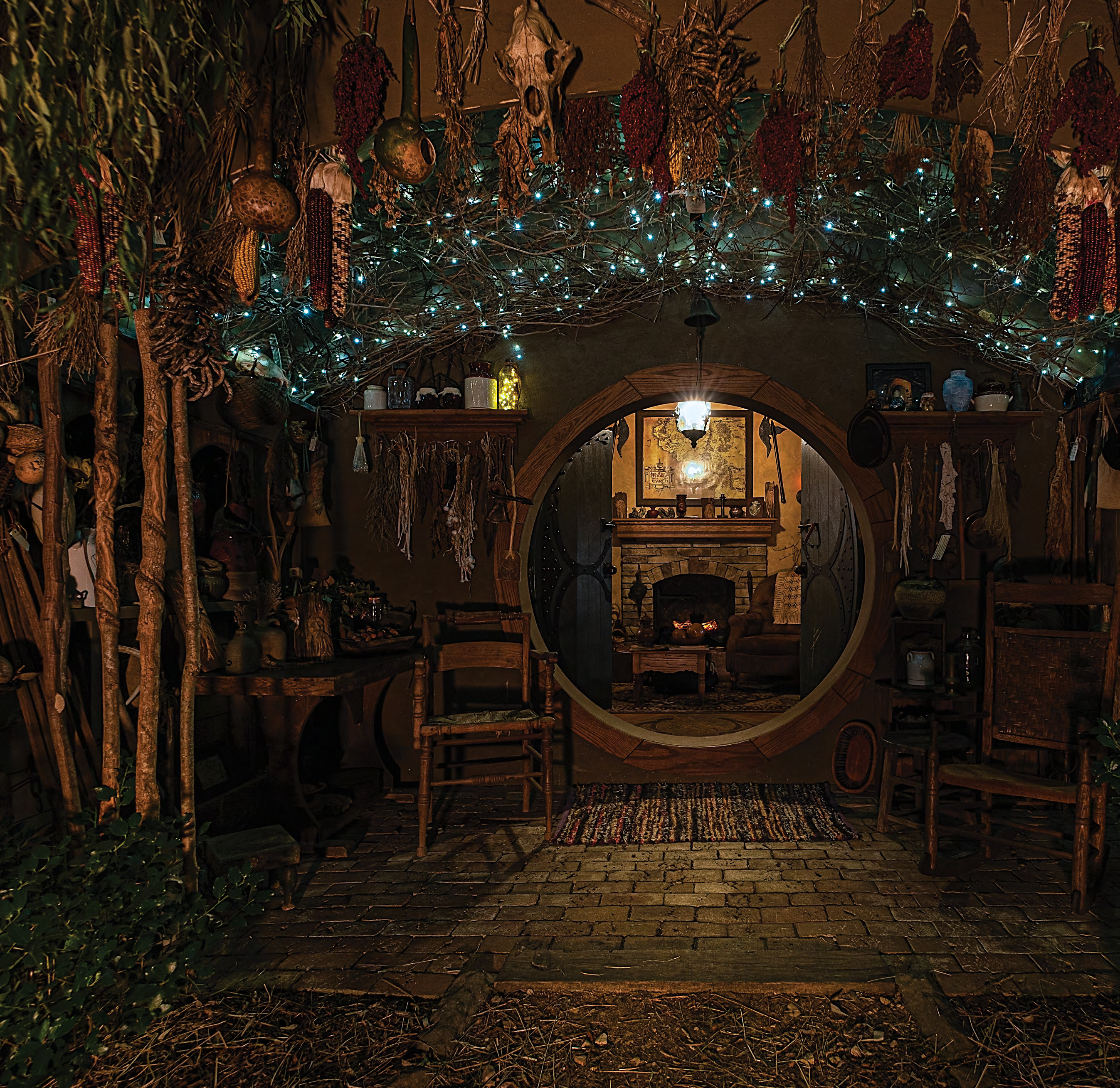 Randy, who was a building contractor before retirement, already had plenty of experience with underground structures. In 2008, he built a 2,600-square-foot subterranean home he and Linda lived in for nearly a decade. Randy has also been a fan of Tolkien since reading The Hobbit in fourth grade, though he admits that the book initially “really scared” him. “In my opinion The Hobbit was a bit frightening for a young mind,” he says. “However, with perseverance and patience I was able to better understand the plot. After that it was hard to stop … I love the writing for the simple fact that such a place could have really existed somewhere, or maybe still does. I can’t see radio or TV signals or electricity; however, I know for a fact they’re there. In my mind, and the mind of every Tolkien fan, Hobbiton, the Shire, and Middle Earth do exist. Our humble hole in the ground is truly a sanctuary for the soul, fulfilling that deep down, burning desire to visit and witness the magic first hand.”

Randy broke ground on Hobbit’s Dream on the last weekend of June 2017, wrapping up construction that November. Finishing the largely handcrafted cottage in less than six months might seem a staggering task better suited to a Maiar than a mere mortal, but according to Randy it involved more love than labor. “The hobbit house was just a really cool project for me,” he says. “I had absolutely no  problem building it. I made the  windows, ironwork, doors, light  fixtures, and props in my shop. I  also harvested all the wood for the  hobbit hole off our farm here. We  selectively cut the trees down, sawed it all out, and then turned it into all the beautiful trim, cabinetry, and doors you see.” 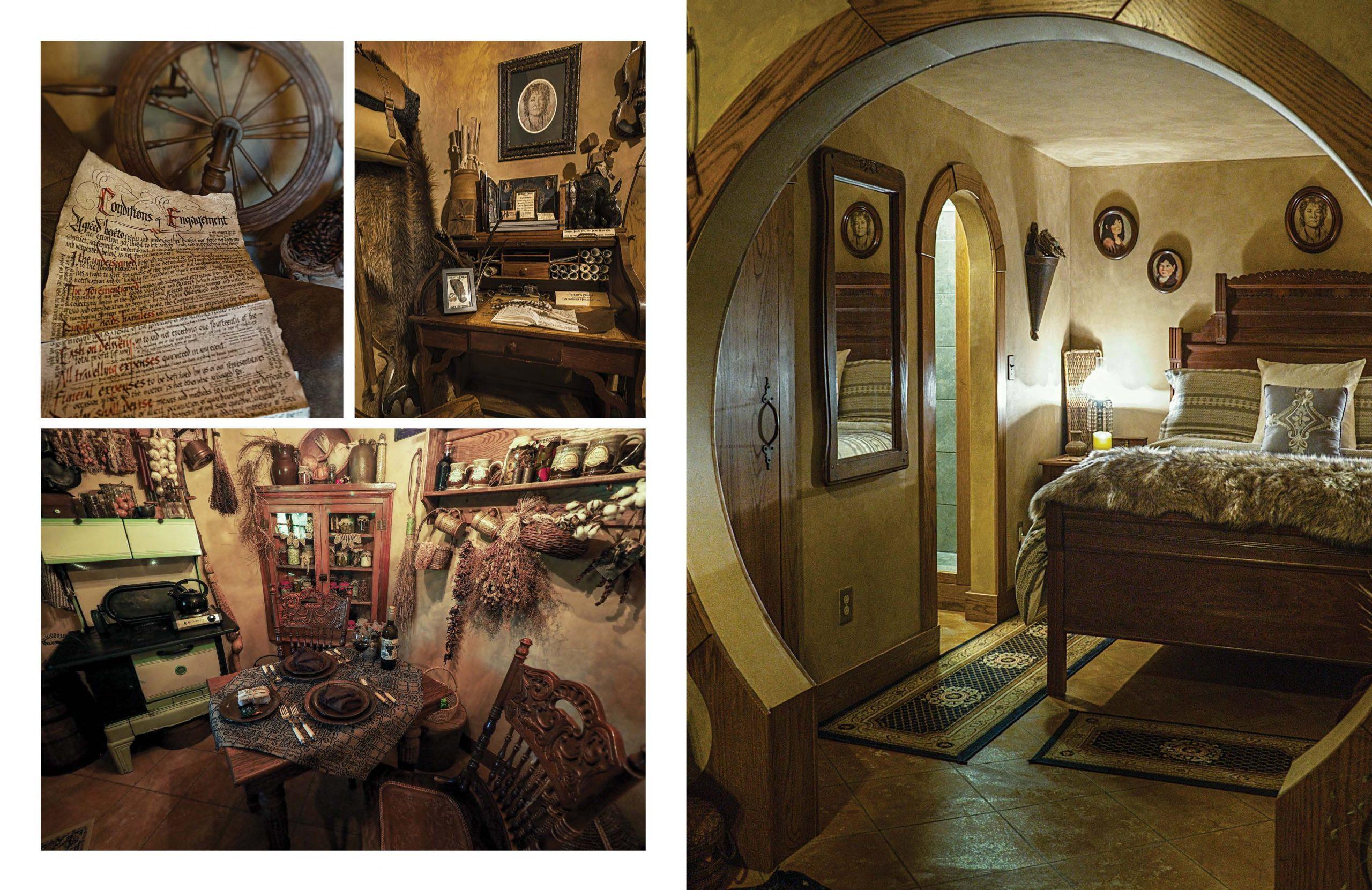 There are plenty of smaller but no less delightful touches to behold at Hobbit’s Dream, like the metal dragon crafted by Randy that greets visitors at the property’s entrance, and a formal invitation, issued on parchment paper and sealed in wax, waiting in the mailbox for guests when they arrive. Other gifts include a special handmade passport and a rune stone inscribed with Gandalf ’s mark. Inside the cottage, a hobbity seedcake baked by Linda and a bottle of local wine provide an additional welcome.

Hobbit’s Dream was a smashing success from the arrival of the very first guests in April 2018. The pair became engaged during their stay, setting what would quickly become a trend. Since it opened, a half-dozen couples have promised to wed at Hobbit’s Dream and two—including that first duo—have exchanged vows there. Randy doesn’t sound terribly surprised when he speaks of the way romances have deepened into lifelong commitments at his guest house, but then he and Linda were childhood sweethearts. They’ve been together fifty years, have been married forty-six, and Randy still calls his wife “the love of my life.” 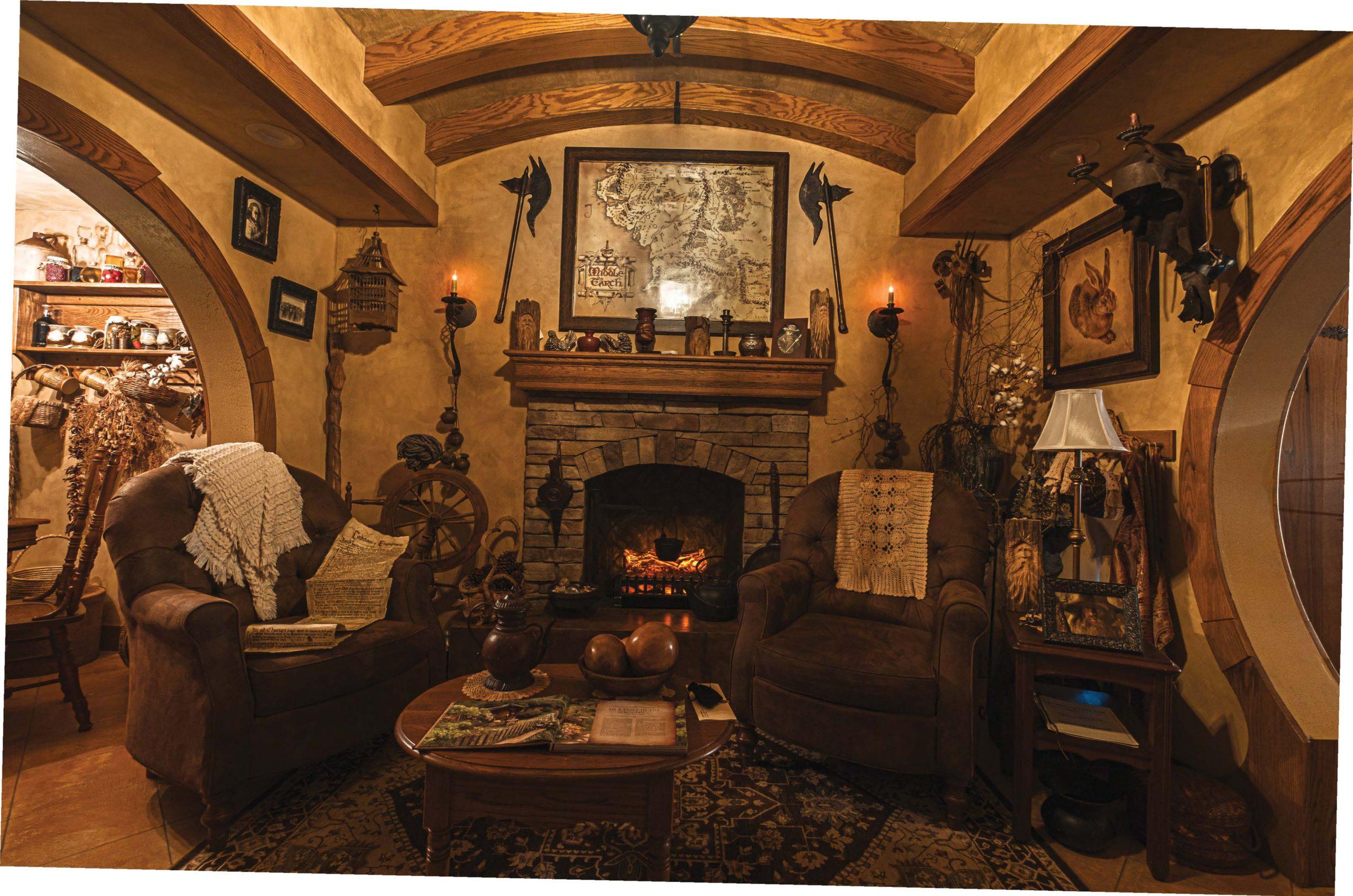 So magical is Hobbit’s Dream that guests keep returning, two or even three times. By Randy’s count he’s had fifty or sixty repeat guests. Part of the allure may be that the property is constantly evolving as the Hollands make or occasionally find new goodies in antique stores and the like to add to it. “I’m always watching the movies again,” Randy says. “There are so many things you can catch that you didn’t see originally. I recently noticed in The Desolation of Smaug that an elf blows a horn in the scene where the dwarves escape from the dungeon. So I’m working on a cow’s horn in the shop now that will be another treasure for someone to enjoy.” 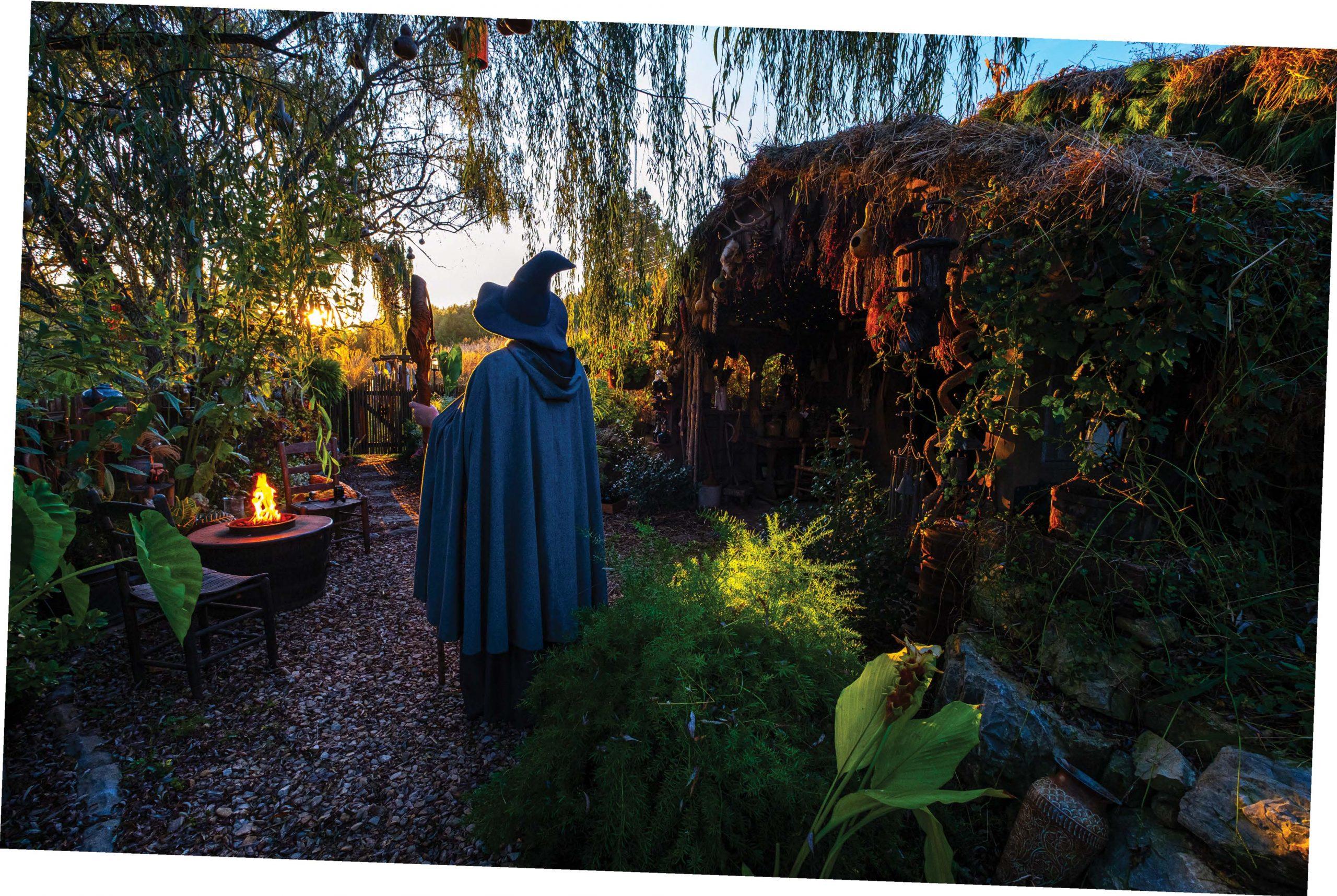 The shop isn’t only for Randy’s pleasure. He offers pipe, woodcarving, and broom making workshops to guests of Hobbit’s Dream in the space. The latter cost $45 for an hour or two of instruction in the making of cobweb, decorative hearth, or what Randy calls “dragon wing” (better known as turkey wing) brooms. Less crafty guests can purchase Randy’s brooms, carvings, and more as mementos of their stay. There is plenty else to do on the 200-acre farm, enough so that many visitors never feel the need to explore the surrounding Rockbridge County.

The Hollands have stocked the cottage with hobbity garments and items—from Gandalf ’s robes, to Bilbo’s backpack, hiking stick, and sword—that encourage cosplay. Guests can stroll the property becloaked, with a “dragon’s egg” in hand, or relax out on the “Buckleberry Ferry” (“no Black Riders here,” the Hobbit’s Dream Airbnb page promises), which floats in the farm’s small lake. There are trails to hike, and a little fire pit in front of the cottage beckons as the sun sets, the night made ever more lovely by the hundreds of lights festooning the property’s mill and waterwheel, as well as the ferry. Lucky visitors who happen to be staying at Hobbit’s Dream when the Hollands are making sorghum molasses or apple butter are welcome to watch the process or even lend a hand if they choose. 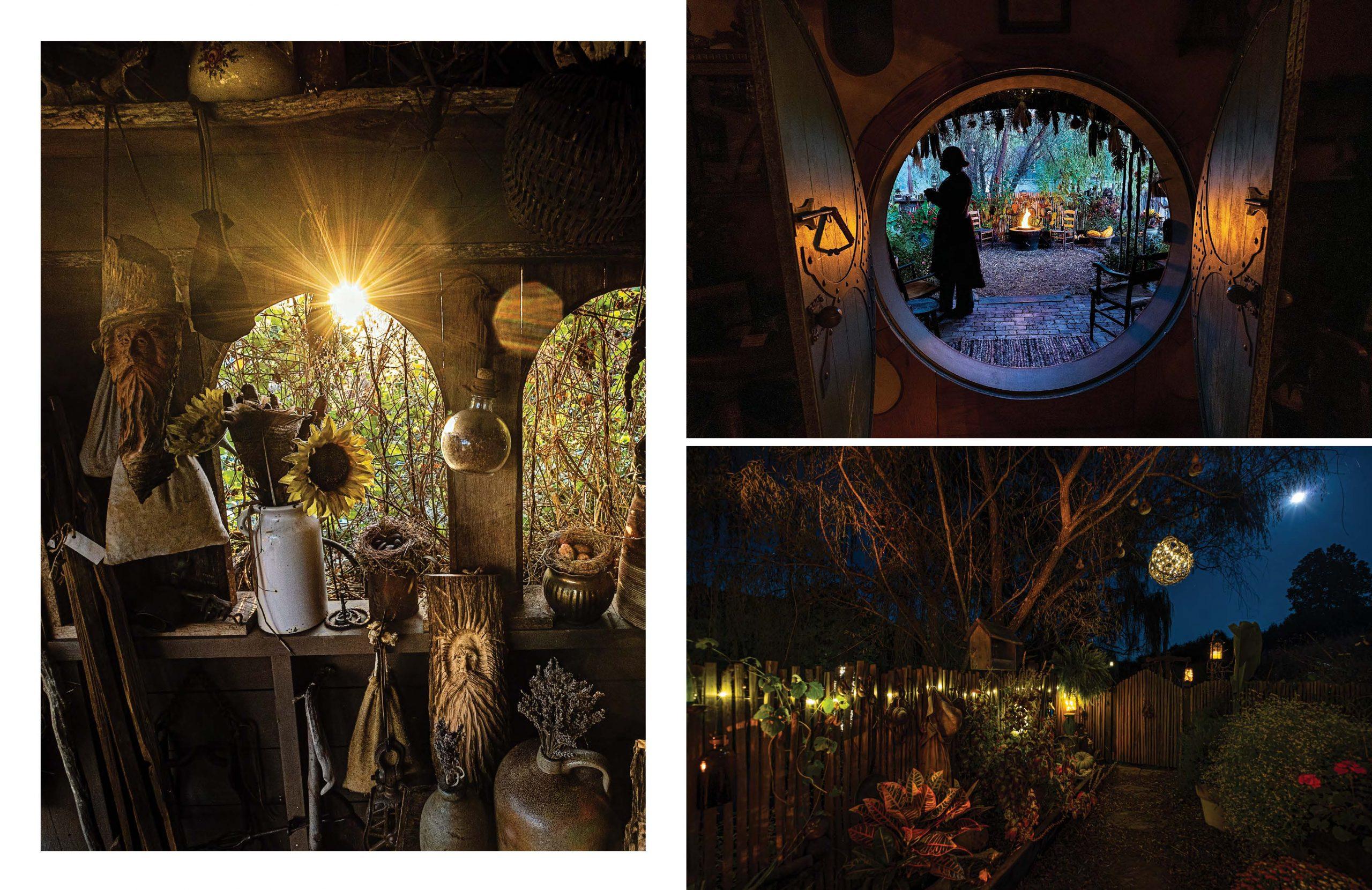 “Linda and I are very social people,” Randy says, “and we love spending time with our guests, if they would like us to. We’ve had people come and stay three or four nights and never leave the hobbit hole. They bring all the ingredients to prepare the seven hobbit meals while they’re here. A lot of them have invited us over for meals. And when they leave, they feel like family, like they’ve known us for all their lives. It’s a wonderful place, it really is, and I don’t say that just because it’s mine. If it was your place and I came and visited, I’d feel the same way. We want people to feel the magic of Hobbit’s Dream, to have an amazing adventure.” 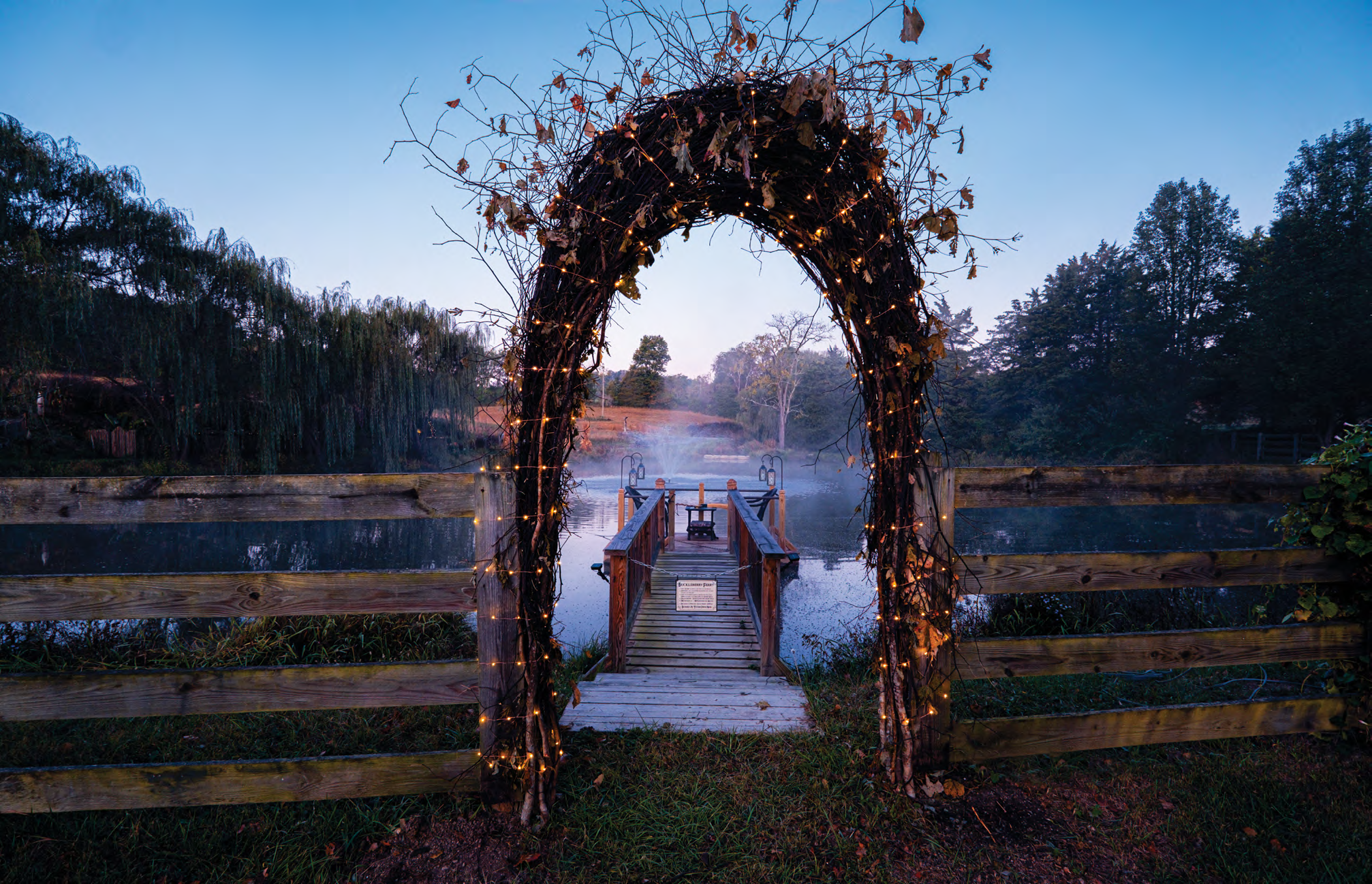