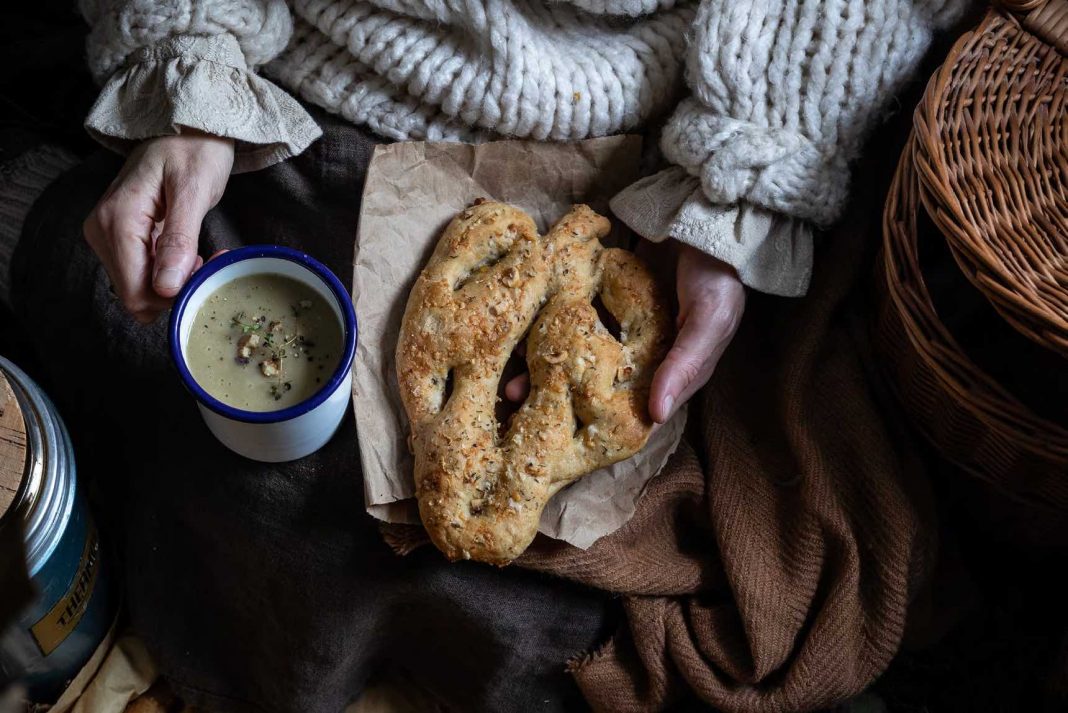 In “The Seductive Nostalgia of the Picnic” for the Atlantic, author Melissa Holbrook Pierson posits that Wordsworth might have been the first lyricist of the picnic. In his autobiographical poem The Prelude, he describes outdoor dining with his friends:

Hence rustic dinners on the cool green ground,
Or in the woods, or by a riverside
Or fountain—festive banquets that provoked
The languid action of a natural scene
By pleasure of corporeal appetite.

If Romantic men and women spent hours frolicking and wandering reflectively through fields and forests, it stands to reason that they might have occasionally dined in them—and possibly even made said dining into an enchanted affair. What is lovelier than heading into the outdoors with a sweet basket full of linen-wrapped goodies swinging from your arms? And, in the winter, perhaps a thermos of steaming soup with bread and pie?

Here, Aimee Twigger, a.k.a. Twigg Studios, suggests some spiced roasted squash and orange hand pies, a delicious roasted garlic butterbean soup, and porcini and cheddar leaf breads—perfect nourishment for wandering through snowdrifts and perhaps crafting a line or two of poetry out of the crisp winter air.

Little hand pies are a great snack for a picnic as they are easy to transport and eat while you are out and about. These sweet pies have a buttery roasted squash filling.

In a stand mixer or a bowl, add the flour, sugar, salt, and cinnamon, then cut the butter into cubes and rub in or blend until it resembles fine crumbs. Then add the eggs and mix until you have a nice soft dough. Cover and chill for 25 minutes.

Preheat the oven to 350°F. Peel and chop the squash into small cubes, and toss together with 1 teaspoon of flavorless oil. Roast for 20 minutes, then stir and roast for another 10 to 15 minutes until tender. Puree in a food processor with 2 tablespoons of water until smooth, then pass through a sieve.

You should have about 1 scant cup of puree. Add to a pan with the sugar, spices, and vanilla and simmer for 5 minutes, then add the orange juice and zest. Once thickened (about 3 minutes), remove from heat and add the butter and stir in a pinch of salt. Let cool.

Roll out pastry into a large rectangle and cut in half, then add mounds of filling evenly spaced on half the pastry. Brush around the edges with a beaten egg and place the other half of the pastry on top, press to seal edges, and then cut into squares.

Make some leaves with any offcuts to decorate, or make any shapes you wish.

Place on a lined baking tray and brush them with a beaten egg and sprinkle on some brown sugar. Bake for 15 minutes, turn the tray and bake for a further 10 minutes until golden.

Serves 4, or 6 mugs
Roasting garlic gives it such a lovely, sweet flavor, and it is so delicious in soup. Paired with butterbeans and potatoes, this velvety soup is perfect for warming you up on a cold winter picnic

Preheat the oven to 350°F. Remove the outer skin of the bulb of garlic. Break but retain the skin on the individual cloves. Place the cloves on a sheet of tinfoil and drizzle over some oil and a pinch of salt. Then fold the foil into a parcel so the garlic is enclosed and roast for 45 minutes. Once roasted, push the soft garlic out of the skins into a bowl.

Peel and chop the potatoes into cubes and add to the bowl with the roasted garlic and set aside until needed.

Finely chop the shallots, add to a pan with some oil, and sauté until translucent and starting to color.

Add a splash of white wine vinegar to deglaze the pan.

Drain the butterbeans and add to the pan with the garlic and potatoes. Add the stock and season well with black pepper and add salt to your taste. Add 1 teaspoon fresh thyme or ½ teaspoon dried thyme and simmer for 20 minutes until the potatoes are tender.

Puree until smooth.
Taste and season if more is needed.

These little breads are full of flavor thanks to the dried porcini mushrooms and mature cheddar and thyme. They are mini-fougasse loafs, which are quite similar to focaccia, but instead of dimples, slashes are made in the dough and it is shaped like a leaf.

The recipe will make six small breads or two large ones. I recommend using weighing scales when making bread.

Place the dried mushrooms in a bowl. Cover with 200 milliliters boiling water and leave to sit for 10 to 15 minutes, then strain to remove the mushrooms, keeping the liquid. Top up the soaking liquid with cold water so you have 300 milliliters.

Pat the soaked mushrooms dry with a paper towel and chop them.

Place flour in the bowl of a stand mixer fitted with a dough hook, then add the salt on one side of the bowl and the yeast on the other.

Pour in the liquid and the oil, and knead at high speed for 5 minutes. Then add the chopped porcini mushrooms, grated cheese, thyme, and hazelnuts and knead again for 2 minutes until the dough has built up gluten. (This dough is quite sticky, so it’s easier to knead with a mixer.)

Pour some oil in a bowl and place the dough in. Cover and leave to rise until it has doubled in size, about 1 hour.

Lift a corner of the dough up in the bowl and use kitchen scissors to cut portions off (about 6 portions total). Working one at a time, stretch each portion into a triangle and cut a slit in the middle and two slits on either side and stretch into a leaf shape. (You could also try a mushroom shape.) Continue until you have 6 or 7 small breads.

Cover trays with proofing bags loose enough that they don’t touch the surface of the dough.

Leave to rise again for 1 hour.

Grate some more cheddar over each loaf and sprinkle on some flaked salt and thyme and a few chopped hazelnuts. Bake each tray for 16 minutes on the middle shelf of the oven, turning the tray after 8 minutes so the loaves color evenly. (You can bake two trays at a time but move them between shelves halfway through, as they will color quicker on the
top shelf.)