Read an excerpt from The Lost Queen 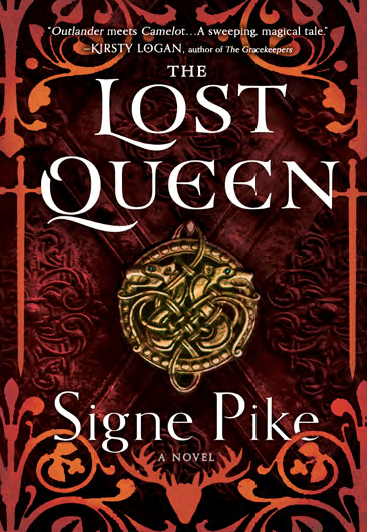 Faerie Magazine: Many of our readers were fans of your first book, Faery Tale. Tell us about that book. What was it like traveling through the U.K. and meeting the Frouds?
Signe Pike: Faery Tale was a journey I undertook to find healing after the sudden death of my father. I began as a hopeful skeptic, traveling through the U.K., Ireland, and beyond in search of those who might still believe in fairies. The book began as an earnest experiment. By the end it became a living map to finding one’s way back to living a re-enchanted life. The Frouds were a tremendous part of that, and I write about our first meeting in the book. Their home is a 16th century stone cottage, inhabited by all the wizened, playful, or beautiful beings they create—Brian’s original paintings, Wendy’s puppet creations. They offered me wisdom that day that I return to even now, nearly ten years later. Of course I share that in the book too!

FM: What’s the new trilogy—including your first novel!—about?
SP: The Lost Queen introduces readers to the real people who inspired the Arthurian legend. New scholarship has uncovered an intriguing new theory that Merlin was a real man who lived in sixth century Scotland. It sounds incredible, but it’s true. This man had a twin sister named Languoreth—she was married to a historical king named Rhydderch. As I began to research her life, I learned about the epic events Languoreth survived in her lifetime. It angered me that such a remarkable woman had been forgotten and that real human beings like her brother, Lailoken, had been fictionalized. The real man was more than a wizard. He was a chieftain’s son, a druid, a politician, a warrior, a friend. This trilogy seeks to tell a truer version of their story.

FM: Some early readers have assumed The Lost Queen is a fantasy novel. Are there fantastical elements in your story?
SP: The Lost Queen is historical fiction. All the major events that take place—assassinations, raids, battles—truly occurred in Languoreth’s lifetime. I have a historical timeline and historical sources I work from. But this doesn’t mean the books are without a “real world” sort of magic. I love fantasy, but I don’t believe fantasy is better than reality. I believe that when we unearth the enchantment inherent in our daily lives, our realities can become so magical, they feel like fantasy. The truest things are often the most fantastical. And so the magical elements I incorporate in my novel are in keeping with the sensibilities of Britons living in sixth century Scotland. To them the natural world was imbued with spirit. Rivers were seen as goddesses. Curses were thought to hold power. There is only one moment that requires a bit of suspension of disbelief. It involves a feather—

FM: Yes, the feather! Can you tell us about the bone feather necklaces you had made to help readers bring some of Languoreth’s magic into their own lives?
SP: At an important moment in the book, Languoreth is given a falcon feather she wears as a talisman. Feathers are meaningful to me, and I wanted to bring something out of the book that I could hold and wear in the third dimension. I discovered Silver Hawk Studios, a third-generation, family-owned company that makes hand-painted feathers carved from repurposed bison bone. We teamed up to create a feather based on the description in the book. I wear mine constantly. Let me tell you, these necklaces have good juju! And a generous percentage of the proceeds go to protect birds of prey. They’re available on my website.

FM: Did you do any glamorous overseas travel for research?
SP: Yes! Although it’s felt far from glamorous at times. At one battle site in the Scottish Borders, I had to pull myself up a stinging-nettle-infested hillside slick with sheep poop by gripping a barbed-wire fence—you’ve got to be up for that sort of thing. I don’t mind the effort. It’s incredible to stand where my characters once stood. Plus, it’s the best way to get the flora and fauna right. I seek out artifacts while there and have met with archeologists who uncover early medieval digs.

Read an excerpt from The Lost Queen

FM: Any tales from your travels for The Lost Queen that you can share? Any unexplained enchantment this time around?
SP: Readers may know I tend to find a lot of bird feathers in my path, especially when I’m doing something for work. On my last big trip to Scotland, I visited Languoreth’s childhood home (now Chatelherault Country Park in Hamilton), and as I walked the woods she once played in, I was finding feathers every hundred or so feet. If I’d collected each one, I would’ve had enough to stuff a small pillow. To me that’s a sign that I’m in the right place, that I’m working in partnership with something unexplainable, something greater.

FM: This issue’s theme is Outlander. Was The Lost Queen inspired by the Outlander universe at all? And what might lovers of the Outlander universe find to love in The Lost Queen?
SP: Well, I’m a tremendous Outlander fan. But the truth is, the Outlander universe and The Lost Queen are both inspired by the same thing: Scotland, with its magnificent people, mystical scenery, and remarkable history. My books offer a glimpse into the pre-Outlander world. So much has been written about the Jacobite era. It was a hugely important moment in Scotland’s past. But early medieval Scotland has been entirely overlooked. It’s full of all the same sorts of beauty, music, metalwork, warriors, weaponry, and intrigue. Its people are brimming with the same tough, witty, and endearing sense of humor that so defines the Celts—it’s something Diana Gabaldon quite deftly portrays and one of the many things I admire about her books.

The Lost Queen by Simon & Schuster was published in September, 2018. Read more about Signe at signepike.com.

Interview from the Outlander Issue #44