Home Creative CalmWater: Ceramics That Soothe Like a Still Sea 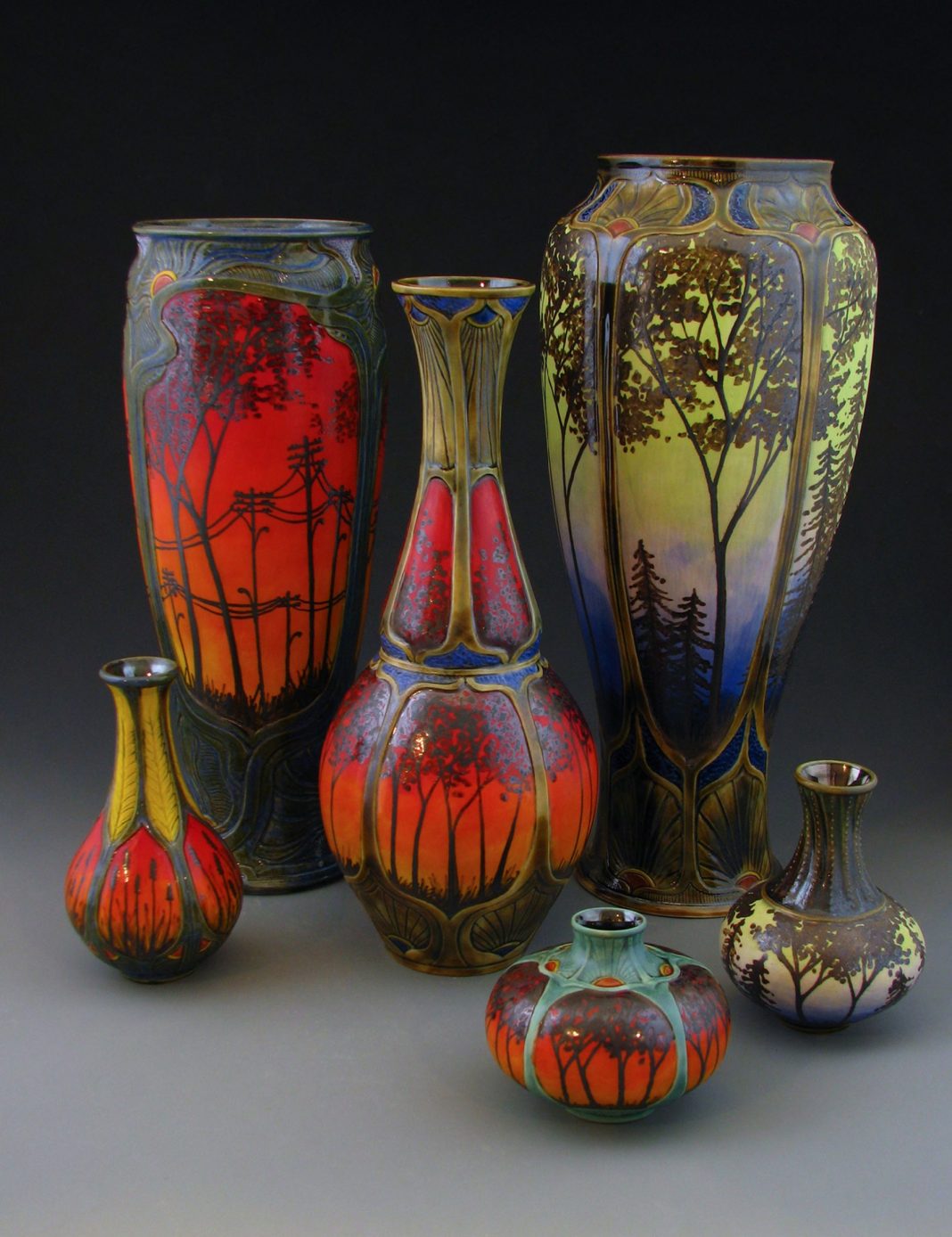 Spend some time gazing at one of New Hampshire artist Stephanie Young’s stunning ceramic pieces—most are delicate, elegant vases with sensuous curves that beg to be stroked—and you might feel the tension begin to drain from your body. All those workaday cares that come with life in the fast-paced, short-tempered modern world, the honking car horns and irritable bosses, social media battles and dispiriting news reports, could well fade blissfully away for a moment or two, replaced with sweet serenity. That’s what Young intends: that her Art Nouveau–inspired work, much of it draped in imagery inspired by the natural world, brings much-needed tranquility and even perhaps a bit of whimsy to those lucky enough to view it.

“The name Calmwater came to me about ten years ago, when I was registering what I guess you’d loosely call a company, the company of me,” Young says with typical good-humored charm. “The name needed to be something that meant something to me. Water has always had this incredibly calming effect on me, and it does for many people. When I’m near the ocean I just want to collect shells and eat ice cream, but if it’s more like a lake or pond setting, something that doesn’t have too much flow to it, I just want to sit near it and watch. I like to make my work approachable and beautiful and calming, so it was a perfect name.”

“… there’s a flowing
element, and a way that the
line work ties together, that
is very approachable and
harmonious. I like the colors
of the period, the earth
tones and jewel tones.”

Given Young’s love of water, it’s no surprise that her early work swam with marine life, from lobsters and sharks to jellyfish, squid, sand dollars, and even less obviously appealing creatures, like sea slugs and worms. She’s since expanded the range of themes that grace her ceramics and now offers other series grouped around forests, bugs, sunsets, Art Nouveau, and what she terms “eccentrics,” or “one-off weirdo pieces,” which can include vases dedicated to smoked meats (seriously) and okra. The latter is a work in progress, a big project Young figures she’ll price at around $1,600. The former was the first item sold at a show in Asheville, North Carolina, to a crane operator from Missouri who understood immediately its sly humor, immersed but not completely disguised within rich-hued, gloriously sculpted beauty. 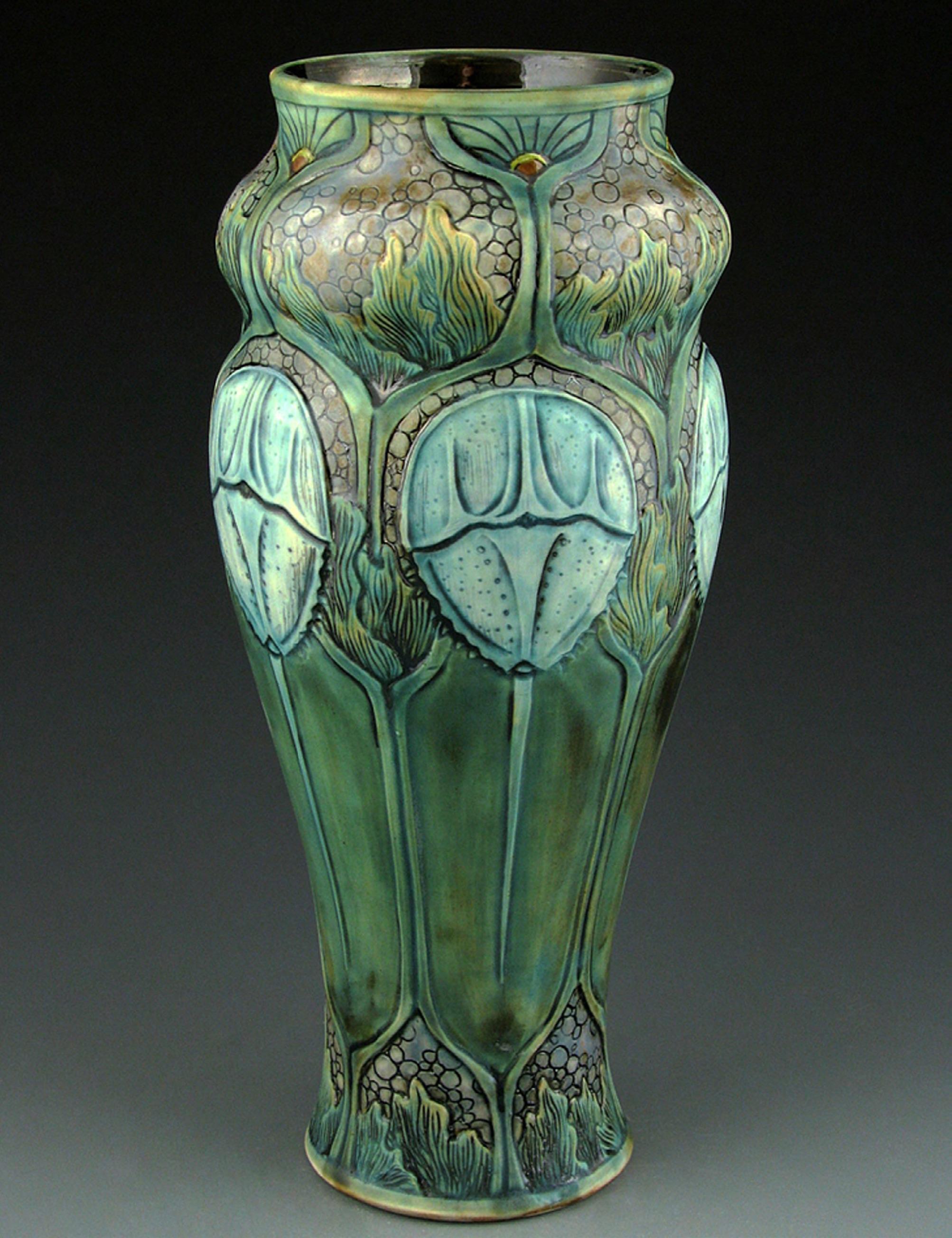 Should any of Young’s many impassioned collectors—among them entomologists clamoring for her roach vases—decide they’d like to psychoanalyze her, they might discover what they need to know about how she spent her childhood years from her designs. Raised on 400 acres near the Pennsylvania border, about an hour from New York City, Young spent what she describes as “all day, every day” in field and forest “collecting bugs, sticks, and turning over logs looking for salamanders—which I still do—owning every field guide known to man, catching anything I could get out of a pond and putting it in jars, almost obsessed with documenting and seeing everything and knowing where everything was. And I still love that, and to this day I incorporate those things into my work.”

Young’s mother was an antiques dealer and passed on her love of precious old things to her daughter, who would sit for hours pouring over dense tomes rich with photographs of heirlooms and artifacts, relics and rarities. She loved the Victorian pieces and especially Art Nouveau designs. “I feel like the aesthetics of older things deeply implanted themselves in
the back of my brain,” Young says, “so it’s always appealed to me—I don’t own anything new, everything in my house is old. For a while when I lived in Boston I was a little bit of an antique picker. I wound up being drawn to some different silverware patterns, and those were Art Nouveau. I never formally studied it, but I can spot it now and it’s a beautiful thing to me.” 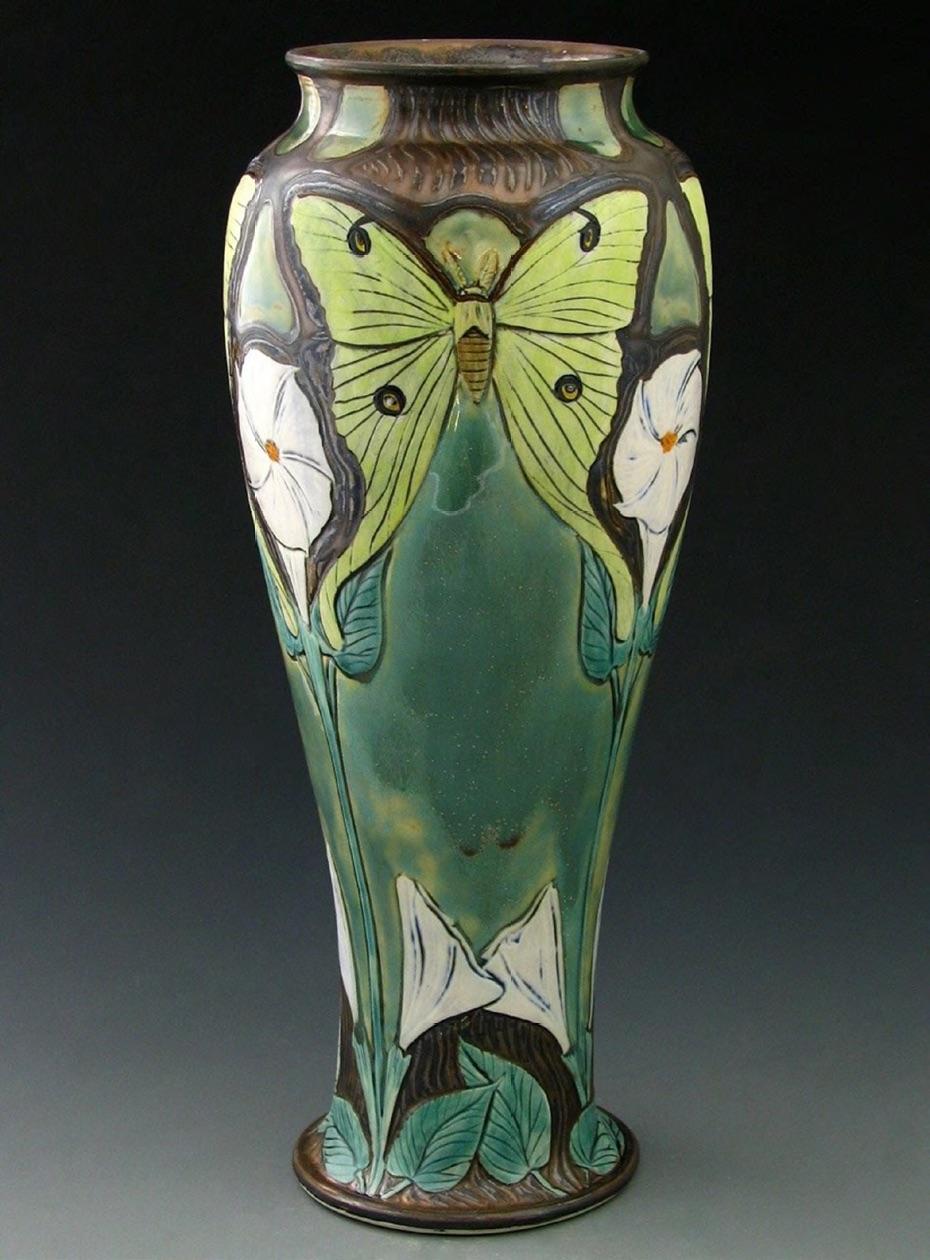 After a pause, Young continues, “There’s an inherent geometry there, and I like order. I like nature and sacred geometry and all that stuff. But then there’s a flowing element, and a way that the line work ties together, that is very approachable and harmonious. I like the colors of the period, the earth tones and jewel tones. They appeal to me as well. And when you look at the design element of Art Nouveau, you could put that right next to a beetle shell, and you can see those exact elements. You can see the line work of an Art Nouveau fork is the same as a daffodil leaf. It is essentially a variation of nature.”

Young says she always wanted to be an artist, along with an entomologist and scientist and archeologist and oceanographer and a mermaid, too. Despite her early gift for fort building, which she calls her “first sculptural experience,” she remained mostly dedicated to drawing until a few good ceramics teachers in high school and at the Art Institute of Boston turned her head. She eventually began teaching the art at community centers and nonprofits in the area; for the past decade she’s been an instructor in Harvard’s ceramics program. She still paints and draws. “Essentially I’m creating these vessels to adorn with what I would put on a canvas or a piece of paper,” she says. 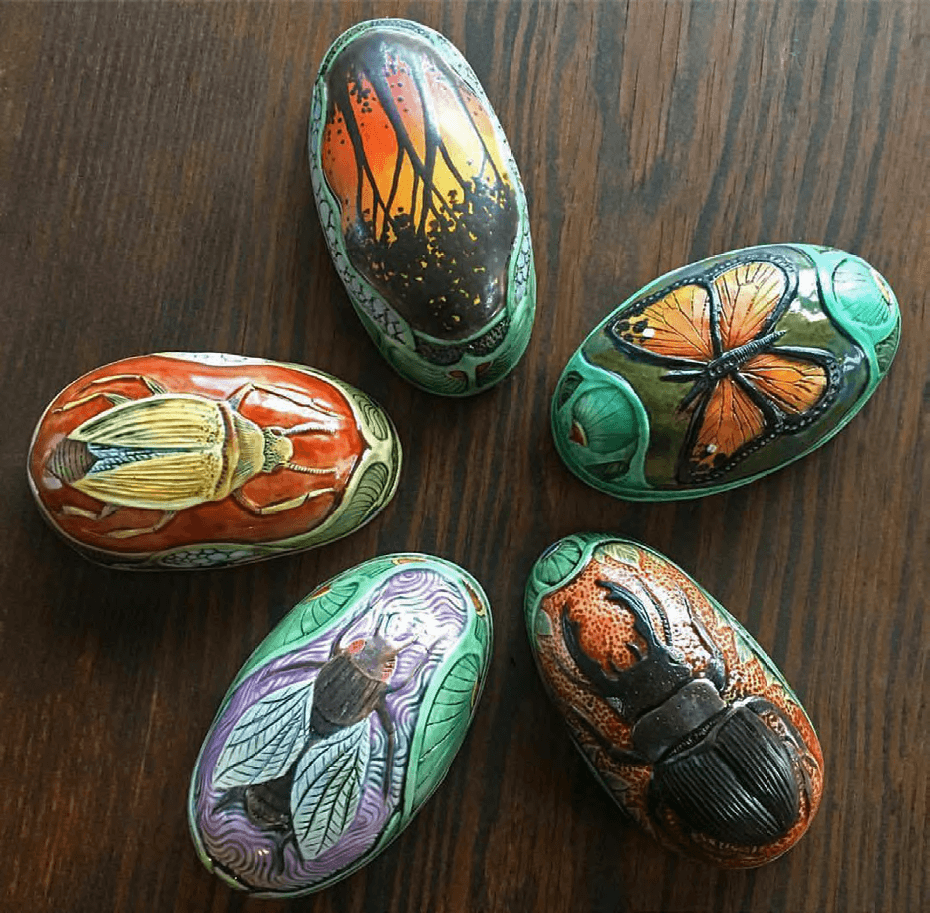 Young hand-throws her pieces, which are porcelain, on the wheel, trims them, and then carves each free hand with simple tools when they are dried to the consistency of leather. After firing them, she hand-paints each with glaze and then fires them again. Each vase takes her from about six to eight hours to create. Young sells the most common size for around $450, an incredible value for art collected worldwide that upon occasion gets resold on eBay at massively marked-up prices.

It may be fair to call Young a victim of her own success. She admits she’s unable to keep up with the demand for her work and can no longer accept commissions. Whether she’s just opened her booth at an art show or posted a new selection online, Young’s work sells out in minutes. For anyone looking to snag a piece, the artist suggests haunting her website in the wee hours of the night, when she’s been known to quietly post a few stragglers for sale. Otherwise, she’s about to begin selling a range of merchandise including bags, pillows, and fabrics printed with her designs on her site.

If you happen upon her work in a show, a shop, or online and it speaks to you, you should probably purchase it. It won’t be for sale for long, but it will, as Young notes, be around for a very long time. “Porcelain is quite permanent—we study cultures of past through their ceramics,” she says. “So the things that I’m making are going to be passed around, and they’re always going to be objects of beauty. And they don’t need to be much more than that, because we don’t have a lot of really beautiful things hanging around in our houses anymore. We have utilitarian stuff, but these are hopefully semi-permanent objects of beauty, so that positivity can just kind of carry on with the piece. That’s really what I’m trying to achieve with them.”