Home Creative Bonding with Birds at the Ohio School of Falconry 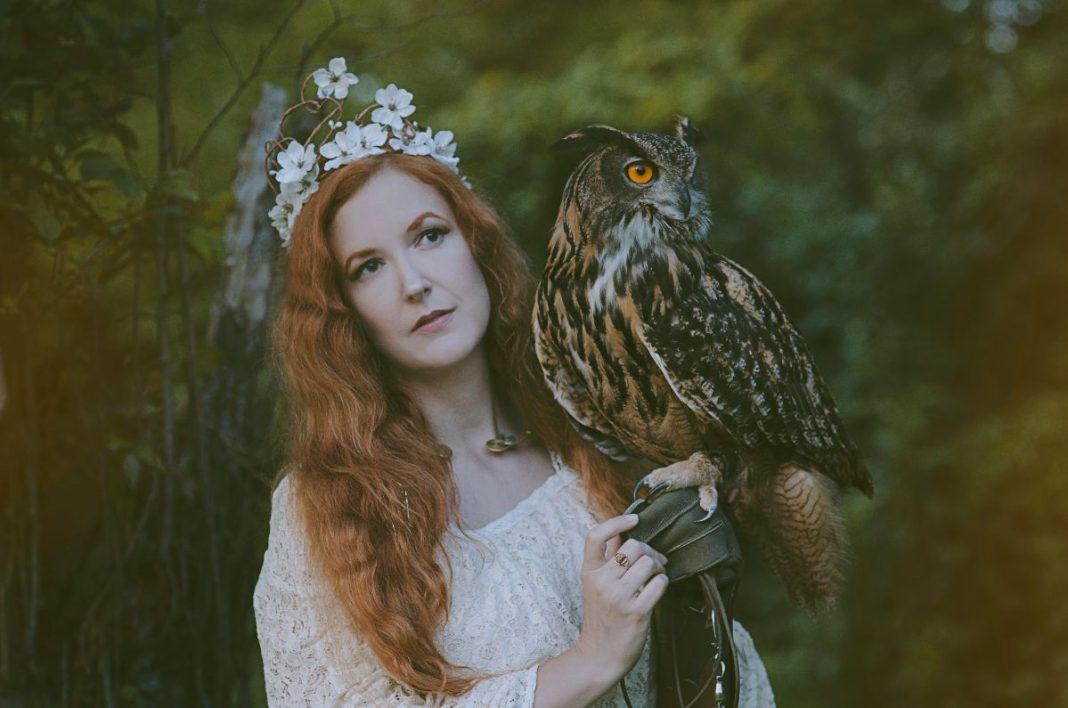 One likely reason owls love us so much is because senior editor Grace Nuth spends much of her spare time cozying up to them, when she’s not interviewing Toby Froud about Dark Crystal, Age of Resistance or talking to Gibbous Fashions about witchy fashion or writing lists about ways to embrace your inner witch for our upcoming autumn witch issue or what have you.

Here are a couple candid moments caught by Rachel Lauren, as Grace bonds with some friends from Ohio School of Falconry and secretly tries to lure them home with her: 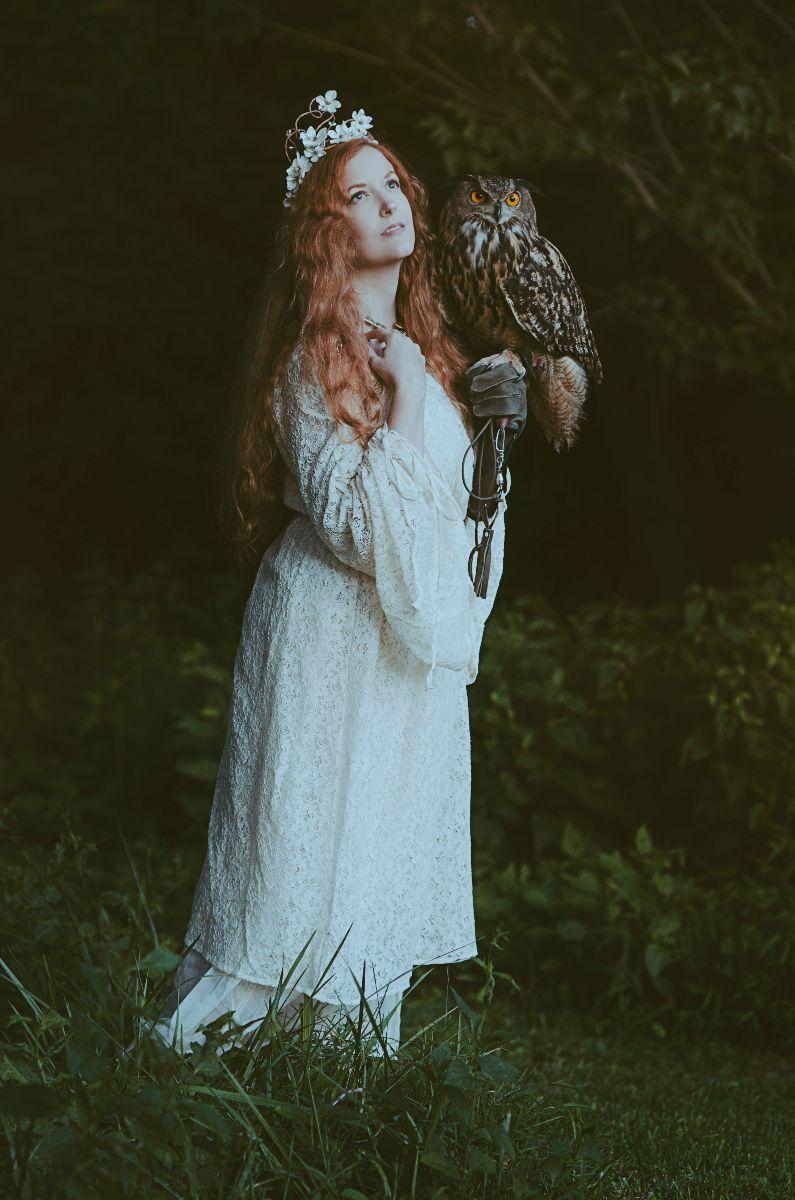 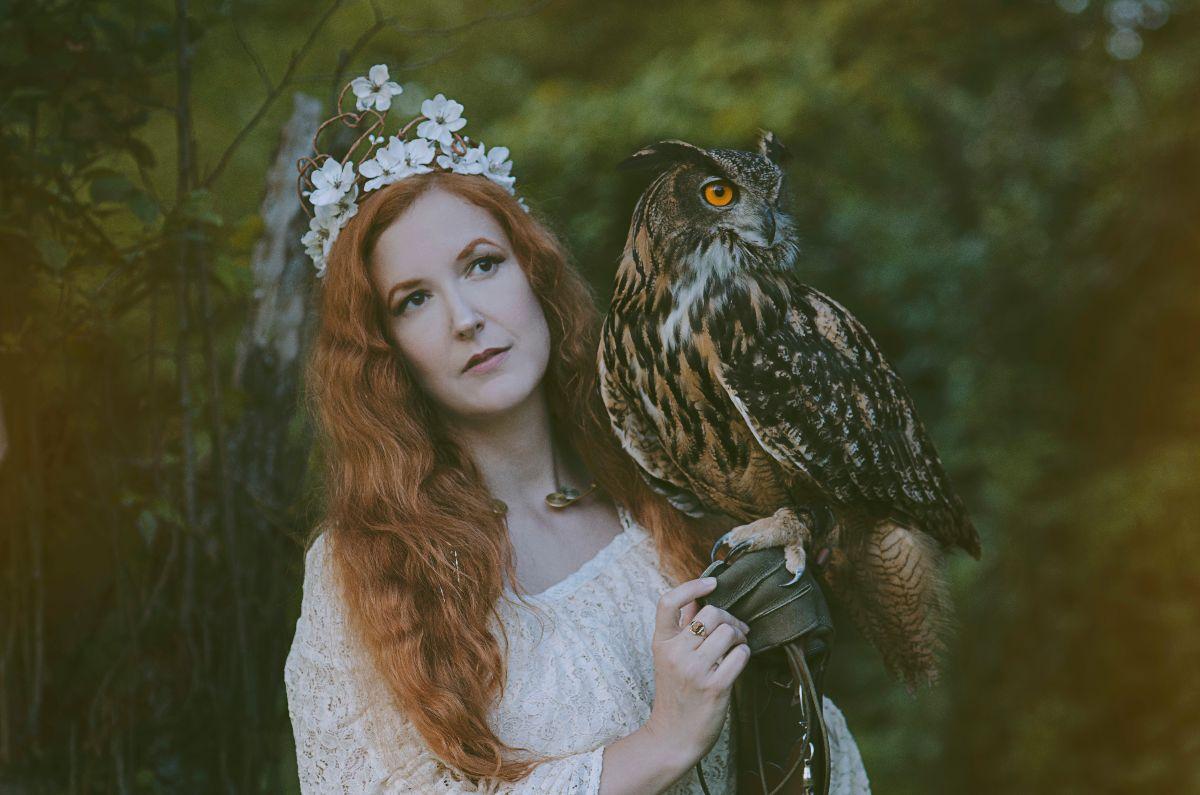 We asked Grace to tell us more about the experience below:

I wouldn’t say I was terrified, exactly, when Joe Dorrian of Ohio School of Falconry opened the large protective case that contained Major Tom the Lanner falcon. After all, I’ve taken photographs with ambassador wolves and foxes owned by my friends at Ironwood Wolves many times before. I felt a combination of electric excitement and nervousness. When I was a pre-teen and fell in love with the Valdemar books of Mercedes Lackey, which feature falconry, I dreamed of learning to work with these powerful birds. As I grew up, my dreams shifted, but this moment was still extraordinarily special to me for that reason.

Dorrian talked me through the process of holding the 10-week old baby Lanner falcon on my hand, showing me the proper angle to hold my wrist, explaining how to loop the jesses through my fingers, and what to do if Major Tom tried to take flight (the answer: lift your arm straight up until the bird came to rest back on the glove). I precariously climbed onto the fallen limb of a nearby tree, and Dorrian brought the beautiful little falcon over to me. He was so light on my hand, but when his hood was removed, I could see that, like a wolf pup’s massive paws, he had a formidable beak that he would someday grow into.

Major Tom and I posed for several pictures with Rachel Lauren, who is not only the co-owner of Ironwood Wolves, but also an extraordinary photographer. Then it was time to meet Henson, a Eurasian eagle owl, whose bright eyes glowed the color of a jack-o-lantern with the candle lit inside. Henson was much heavier on my arm, and much more powerful. Dorrian explained that if the owl tried to fly, I shouldn’t lift my hand, but instead release a few loops of the jesses and let him fly to the ground when he was done flapping his wings. He was too powerful to contain.

Still, after a few moments, I felt safe around the bird. Well, as safe as one can and should feel near a bird of prey. I moved my glove closer and closer to my face, until I could feel the soft feathers of Henson’s wing brushing my cheek. It was an extraordinarily magical moment, even when Henson decided to turn his head around behind him for half the photos, since the woods and its curiosities (and meals) were behind us.

Ironwood Wolves and Ohio School of Falconry are offering a “Feathers and Fur” photography event on Saturday September 28th, where photographers will be able to take photographs of a variety of birds and wolves (not together, mind you!) throughout the day, both with a model (a certain redhead you might know) and on their own. For further information, please contact either organization through the links below 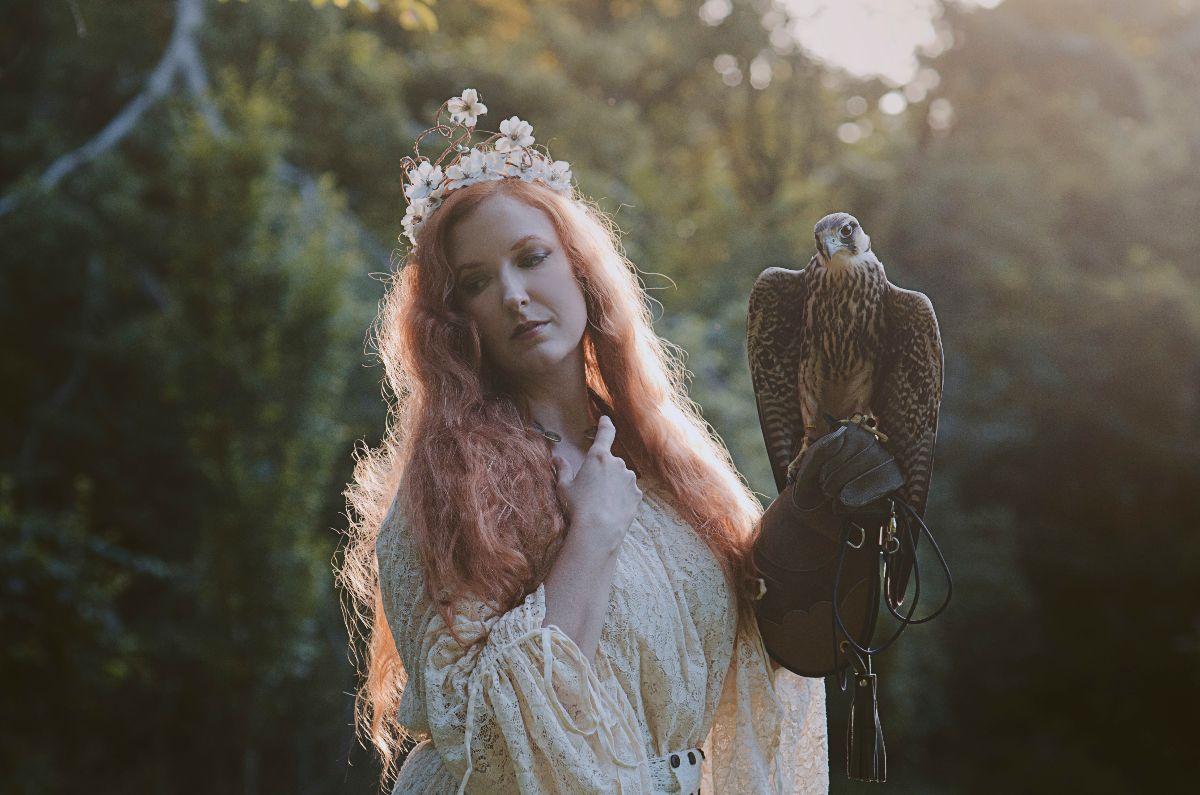 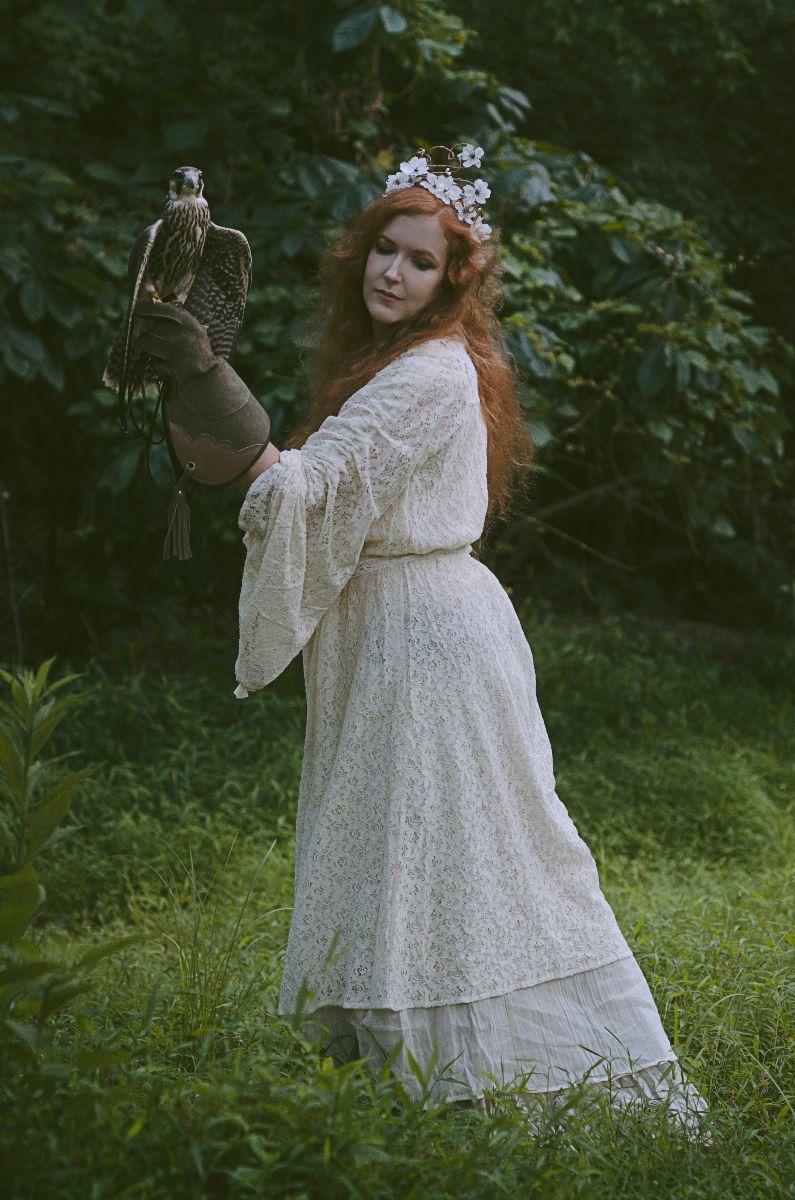 And some iPhone shots from the day, too: 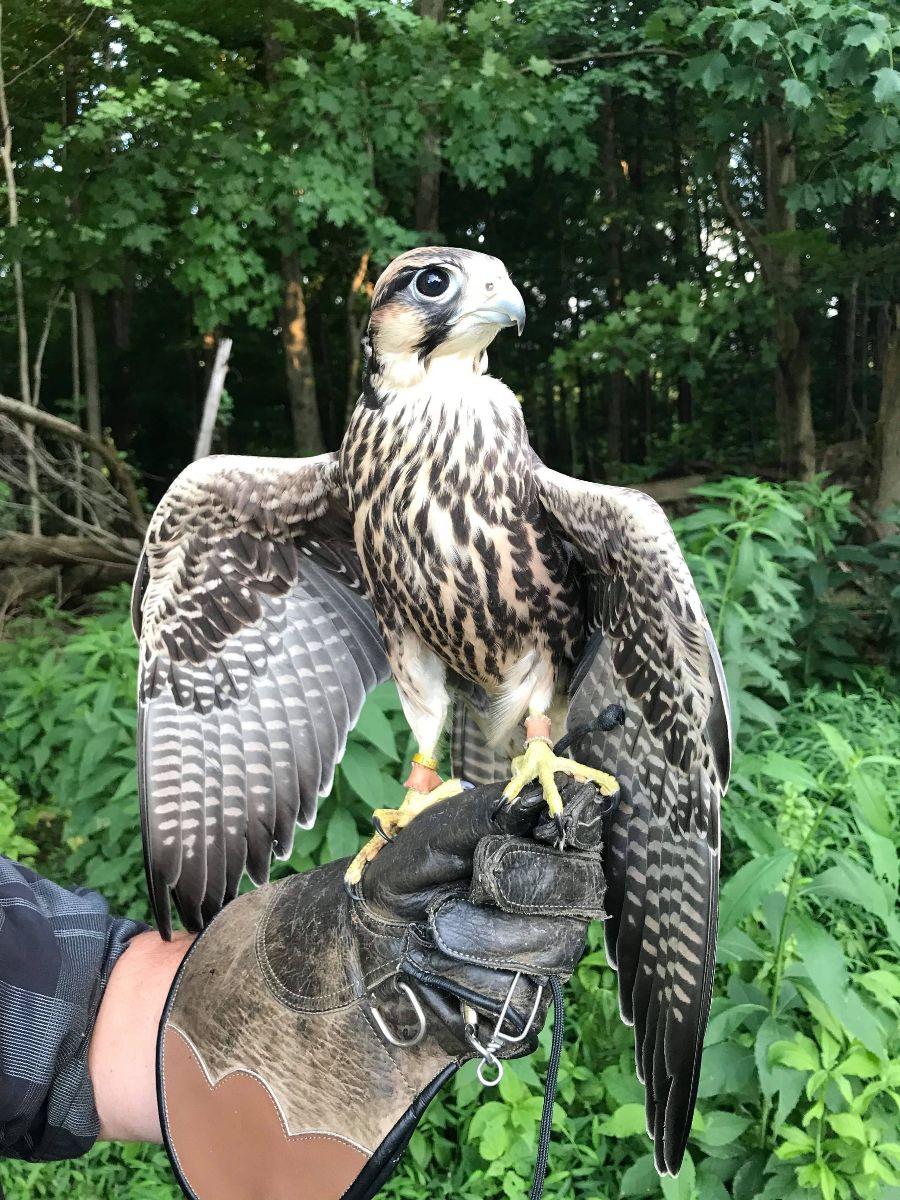 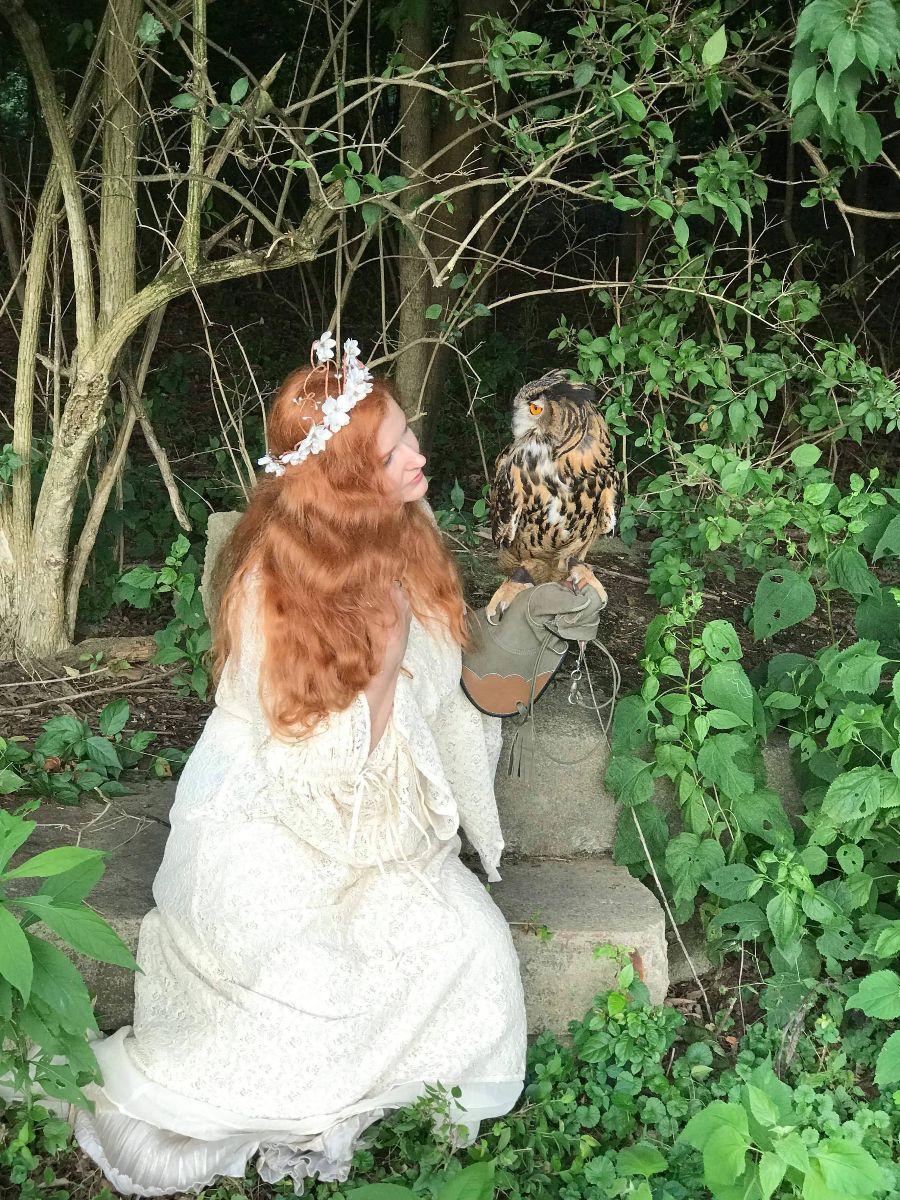 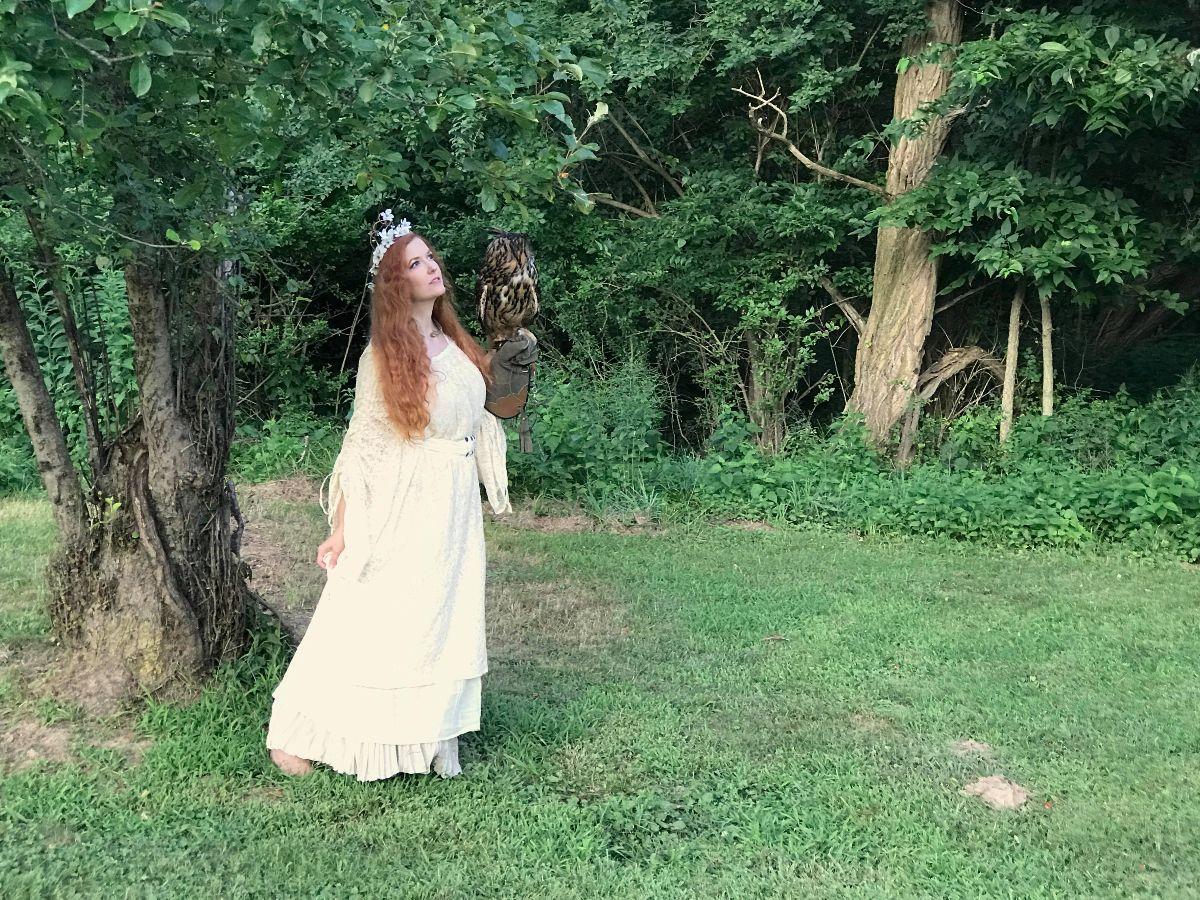