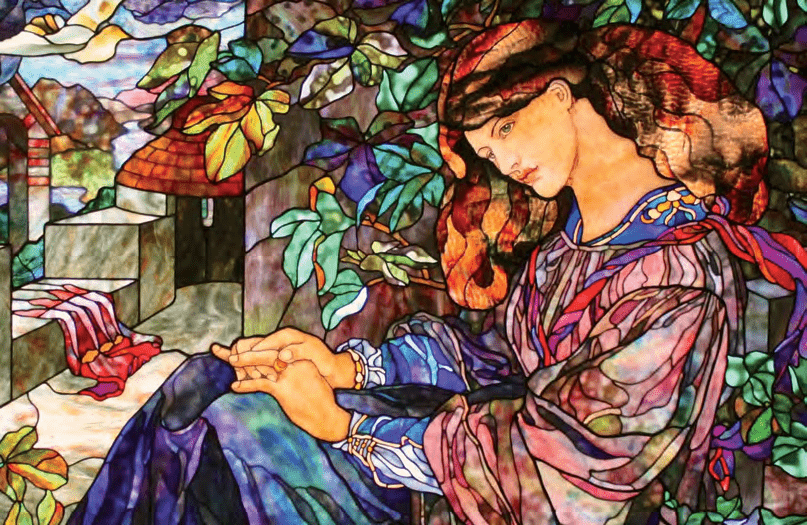 Century Studios, based out of Saint Paul, Minnesota, may not have been in business as long as their would indicate, but their intricate stained glass creations bring to mind the jewel-like pieces created by Louis Comfort  Tiffany at the turn of the nineteenth century. Next year will mark thirty years since the company was in business, founded in 1986 by fine artists Irwin Terry and Bill Campbell.

They’re perhaps best known for their recreations of Tiffany lamps—exquisite pieces created meticulously by skilled workers who are both artists and craftsmen. But they’ve also created many large-scale stained glass windows that recreate the finest artworks of the Pre-Raphaelite movement. Irwin and Bill take the signature Pre-Raphaelite method of painting wet on a white background that made the Victorian art so vividly glow with color on canvas, and translate that same effect into hundreds of pieces of layered cut glass. The emotion and romance of the original artworks carries over beautifully to the new medium.

As Irwin explains, “Working in stained glass is painting with light and color in a way that’s not possible with oil and canvas. Because of the translucency of the medium, stained glass produces an intensity of color that is unmatched. We use our fine art training to employ multiple layers of glass in our windows to create textures and intensity of color not found in a single glass layer.”

Irwin and Bill were excited by the challenge of creating a window based on Waterhouse’s painting, Hylas and the Nymphs. Three different layers of glass come together in the project to bring all of the myriad details to life. Bill then hand-painted the figures in the window. He used powdered minerals in lieu of paint, then kiln-fired the minerals onto the glass surface. In their original glass window design, Winter, they formed the robes of the figure from drapery glass that had been hand-folded as it was poured and rolled on a steel table.

It was while they were both studying for their BFAs that they met, and it was also during this time that they became enamored with Pre-Raphaelite art, and the compulsion to translate it into their new preferred medium. “The intense portraits and lush settings depicted by these innovative painters invite discovery and allow the viewer to find deeper, veiled meanings in the pictures.” Discovery of hidden meanings in glowing, sunlit prisms of kaleidoscopic color: the perfect indoor story for a cold and bright winter day.