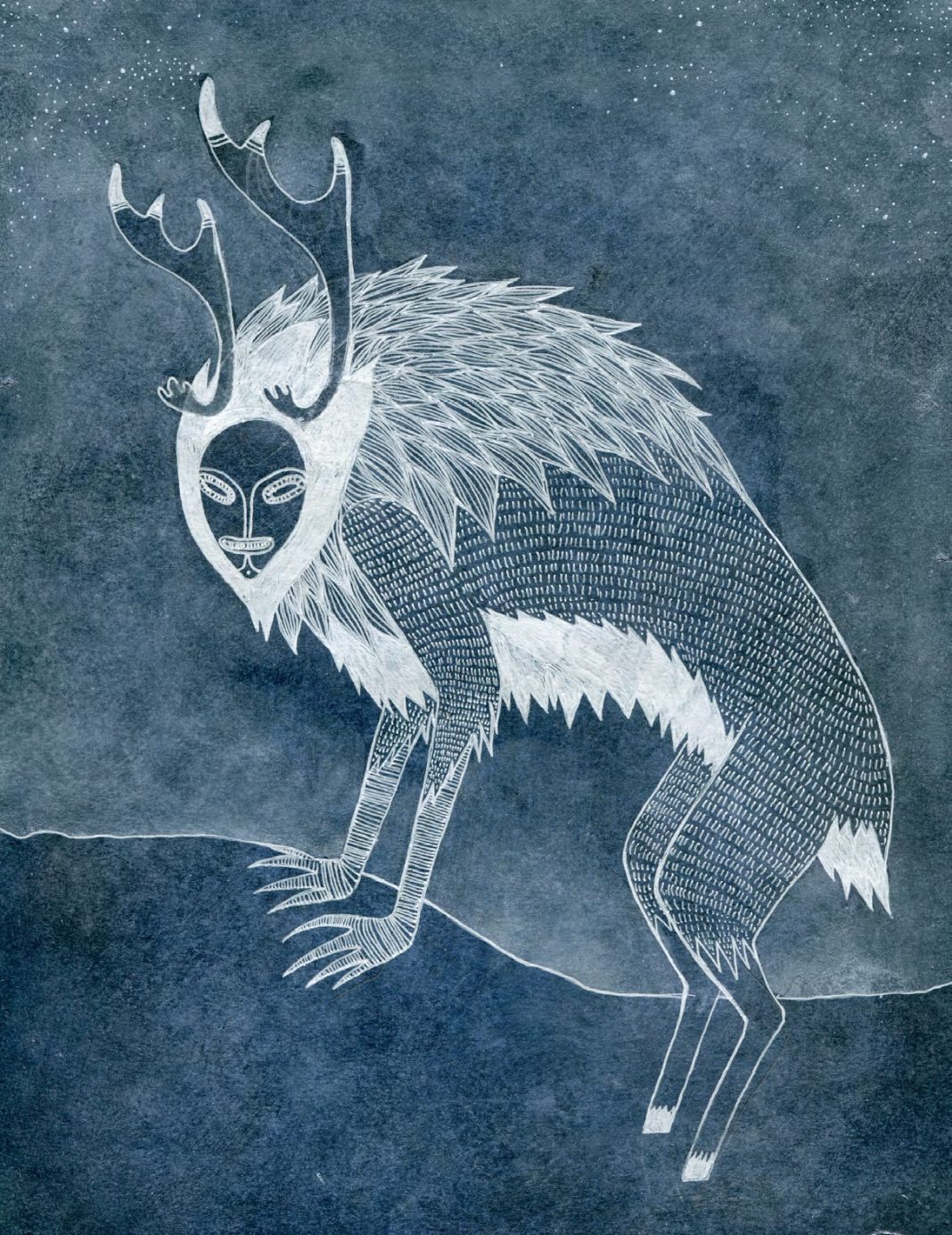 The snow and ice bring with it a pantheon of winter spirits that range from the benevolent to the purely evil with every shade of slushy gray in between—from impish Frost Faeries that paint the autumn leaves in brilliant colors of crimson and gold to icy ghostlike spirits such as the Japanese Yuki-onna that can suck the life out of a person. Winter can be harsh, as many of these demons demonstrate. Even the late David Bowie’s 1966 song “Sell Me a Coat” tells of a poor threadbare protagonist searching for a jacket to keep himself warm now that winter has come and his summer girlfriend has died. He laments, “Jack Frost took her hand and left me. Jack Frost ain’t so cool.” And the nose-nipping Jack isn’t even one of the more terrifying creatures skulking about the dark, blue shadows of winter.

We explore winter’s dark side with two lesser known naughty spirits, one admittedly more frightening than the other. Like the kidnapping Ded Moroz, or Father Frost of Russia, and the Krampus of Germanic cultures, the North American Inuits have their own child-abducting monsters: They are shape-shifting sprits known as the Ijiraq (ee-ya-rock) or Ijirait (plural) that inhabit the perennially frozen regions of the far north. Not only can they can shape-shift into any arctic animal from raven to polar bear to disguise themselves or lure a hunter further astray, but they have the ability to morph into other monsters such as the Tariaksuq, a part-man, part-caribou creature. One of the most insidious reasons the Ijirait disguise themselves is to steal children, carrying them far, far north into the desolate region of Canada’s arctic only to abandon them and leave them to their frozen fates. This is much crueler than ransoming off the children that Father Frost abducted or returning them after their punishment the way the Krampus promises.

The Ijirait can be seen only with peripheral vision; when gazed upon directly, they become invisible. Full of malicious intent, they will lie in wait for lone travelers or hunters to cross their paths so they can confuse and disorient them to the point of no return.

Legend has it that the Ijirait were originally Inuit hunters that traveled too far north in search of game and became trapped between this world and the world of the dead. When an Ijiraq is nearby, a human may become easily confused even though they are familiar with the region. They will see mirages and think mountains on the horizon are closer than they appear. If they are tricked and wander too far north into the limbo lands of the Ijirait, they, too, will become trapped for eternity and turn into those lost shape-shifting souls. The few humans that have encountered an Ijiraq and miraculously returned usually retain no memory of the occasion, and so reliable information is scant. Even if a hunter or traveler enters the land of the Ijirait without meeting one of these treacherous spirits, they become hopelessly lost in their arctic wasteland and will eventually become one of them.

This served as a warning of what could happen if one strayed too deeply into the frozen realm of the north or was careless enough to leave their children alone and unprotected for too long.

A less cold-hearted creature, yet still naughty to the core, is the nature spirit Lausks, from Latvia. An impish Baltic Jack Frost, he is the personification of the cold and is the one responsible for numbing cheeks, noses, and ears in the winter. Unlike Jack Frost, however, Lausks is not covered in sparkling icicles and clutching a staff but rather wrapped in warm shaggy furs and carrying a large ax of silver or crystal. If you hear crackling sounds in the forest during the winter or the sudden snap of a branch after a heavy snowfall, it’s Lausks putting his ax to work. In addition to bounding about the great outdoors, pinching people’s faces until they’re red, and making noise with his ax, Lausks is also a kind of house inspector. In the beginning of the Advent season, he pays a visit to all the homes to test their sturdiness for the winter. To ascertain the structural integrity, Lausks tests the joists, timbers, pillars, and supports of the house by swinging his ax into walls, ceilings, and corners. Any resultant damage is blamed on him. See cracks in your walls? Losing feeling in your toes? You can thank Lausks.