Home Magic A Compendium Of Witches 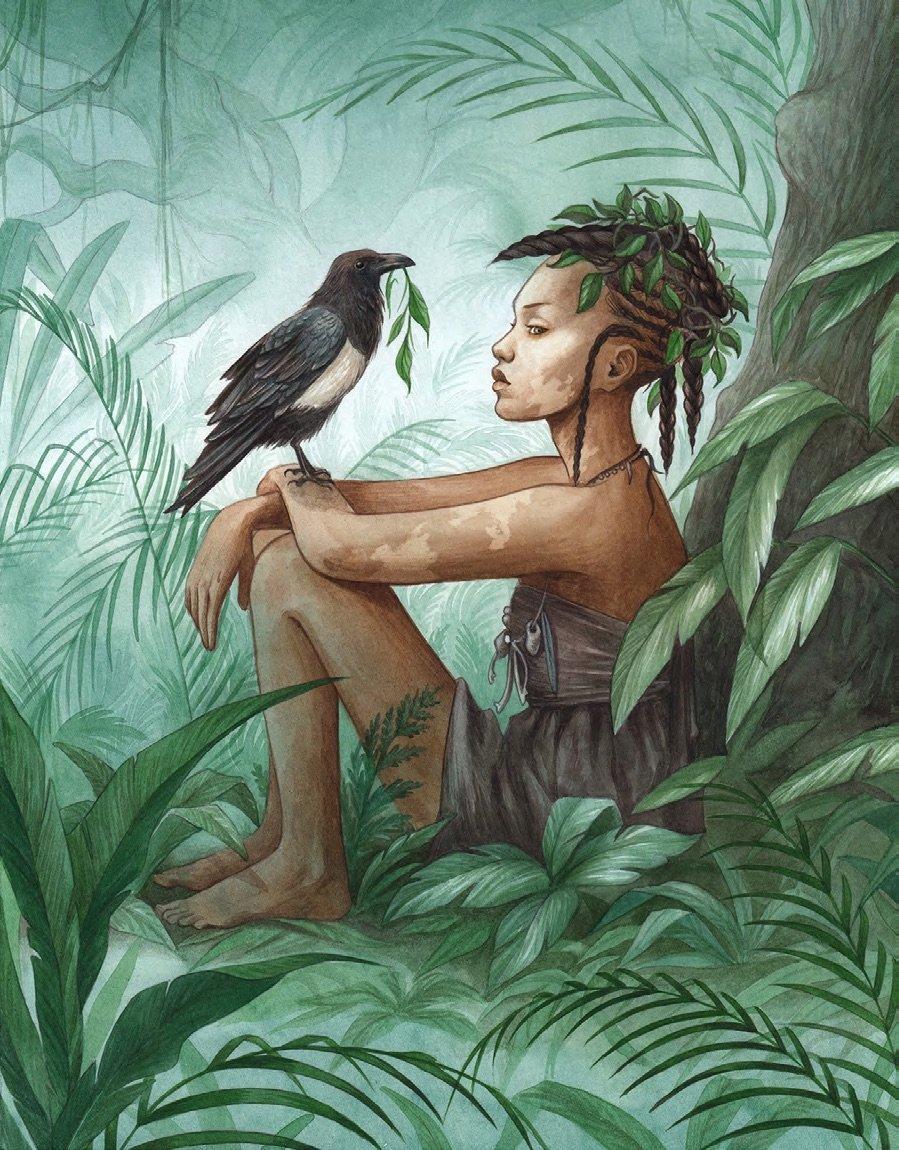 When I first saw a photograph of artist, writer, and cultural anthropologist Nataša Ilinčić’s book, A Compendium of Witches, the beauty of the cover took my breath away. With its richly rendered silhouette of a lone female figure holding an owl, black against a golden moon, framed by dark tree branches, I could see this volume belonging in the library of a Victorian sorceress or secretly passed among witches of elegant French salons. I wondered if the interior of the book could live up to such a glorious cover, but it was no disappointment, with its beautifully painted watercolors of powerful women throughout history and from around the world, along with their stories. Although Ilinčić uses the word witch in the title, she explains in the introduction that it is shorthand for the many different words women have used to define who and what they were, “an all-inclusive way to describe people that have a deep relationship with what is commonly referred to as the supernatural.” She defines a witch as a “woman who observes the nature around her and sees beyond the material dimension and into the sphere inhabited by forces that remain invisible to most people.”

Ilinčić’s fascination with Earth-based spiritualities, religions based on worship of nature, began when she was a teenager growing up in the foothills of the Italian Alps. She always had a fascination with history, and growing up among such beautiful natural landscapes (“dense woodlands and opal streams”) helped her feel an affinity for the natural world and those who saw it as sacred. She also grew up with a love for stories and folklore. “It is testament to a time when the relationship between nature and humankind was more intimate,” she says. “I also see it as a way to preserve knowledge that is slowly getting lost. I love diving into obscure corners of folklore, myth, and history, and resurfacing with something new to tell.”

In college she studied archaeology and cultural anthropology and learned about the ways women have worshipped nature throughout history. Later, she moved to Scotland to pursue art and illustration, but she never forgot her love for these women who believed in magic. Her study of female tattooing in the Balkans increased her fascination with how women could create rituals and use sacred objects to celebrate life changes. By watching these Balkan rites, she could explore firsthand the themes of female rites of passage, sacred symbology, and pagan iconography in modern times. “Talking with the last bearers of these tattoos, who carry such ancient symbols on their skin, sparked the idea for a book,” she says.

In 2018, Ilinčić debuted a Kickstarter campaign to create A Compendium of Witches: her book that would tell the stories of twenty-eight fictional witches (and one true tale). Each witch would tell her story in “her own words,” as imagined by Ilinčić and based on extensive study and anthropological knowledge and context of what these women’s lives might have actually been like. “I wanted the stories of these witches to feel personal, and that’s why I opted for a fictional format,” she says. “I wanted to convey important historical and folkloric information in a more emotionally engaging way that people could relate to.” The Kickstarter campaign was quickly funded, and Ilinčić began to create a beautiful volume embossed with gold and covered in forest green buckram, filled with watercolor illustrations.

Each witch in the book is given four pages—the first two devoted to her story and her portrait, the last two featuring cultural artifacts, sigils and runes, and further details. Delving into the history of these women was difficult at times, since many were social outsiders. “These areas of history can be very dark,” Ilinčić says. “They carry a weight that is incredibly different from the history consisting of the victories of white men. In all this hardship, however, I also found strength, resilience, and wisdom. These virtues are a testament not only to witches but to women throughout history. They’re a great inspiration to me, and I hope to others too.”

The witches in the compendium are from all over the world, and from ancient to modern times, but Ilinčić would love to continue diversifying her research. “Cultural anthropology teaches us an extremely important lesson: the contextualization of our own ethnocentrism, through comparative study and understanding of different cultures,” she says. “A Compendium of Witches features women from different backgrounds, ages, and cultures, but I do recognize that it is still prevalently European and that it reflects my own history and knowledge. I wrote about things that I felt confident I would be able to convey well. I hope that in the future I’ll be able to widen my studies even further.”

Ilinčić wants the book to inspire others to deeper exploration. “In the book I share some of the wisdom I found along the way, but that’s only a small taste of what’s out there,” she says. “I hope this book will open a few new doors for readers and show them something they haven’t seen before. As much as this book is intended to be a journey, it was most importantly designed to encourage people to embark on a journey of their own.”

Spending so much time exploring the journeys of so many magical women from history has had its influence on Ilinčić too. “If witch means wise woman,” she says, “I hope I’m on the path to becoming one! I consider myself pagan, and my spirituality is deeply tied to the earth.” She makes daily efforts to connect to her spirituality by consciously trying to be present. “I try to make sure that small things don’t pass me by unnoticed, like a good book, the first cup of tea in the morning, the opportunity to take a walk through misty weather, or a tight hug.”