We’ve been in love with Russian photographer Margarita Kareva’s dazzling fairy tale images for a while now. Each photo tells a story—of some wonderful place, far away, where dreamy ice queens and lady falconers roam through snowy landscapes and polar bears stalk through an enchanted forest. We’ve done a short interview with her and are sharing some of our favorite images.

Faerie Magazine: What inspires your photography?
Margarita Kareva: The sources of inspiration are many—a book, a film, a beautiful girl, or an unusual designer dress. Sometimes I walk around the city or travel abroad, and I’m inspired to capture beautiful places, nature, and architecture.

FM: Are you telling stories with your photographs?
MK: It’s always some sort of a story, sometimes my fictional stories. I’ve never aimed to embody the image of a particular tale, story, or character. I create my own stories.

FM: I understand that you have been photographing only for a few years. What did you do before? What made you begin?
MK: In general, my biography is plain, like many others’. I changed a bunch of jobs, tried my hand in various areas—anything from web programming to marketing and analytics. In all areas I was a successful worker, but eventually every job ended the same way—with me sitting in a stuffy office all day long suffering from deadly boredom!
I started practicing photography about three years ago (beginning with a birthday gift, my first semi-lens reflex camera), and then after a while I just got stuck on this new hobby! 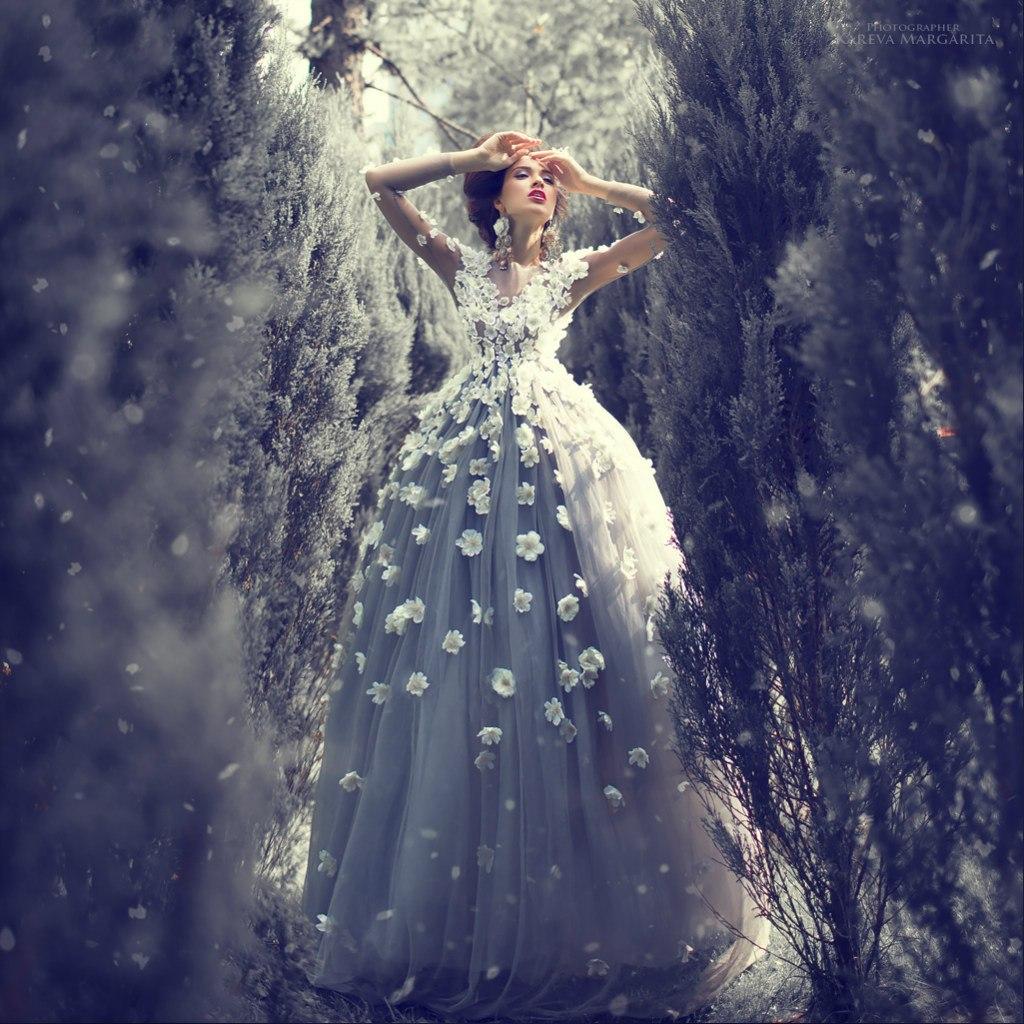 FM: Some of your photos are quite elaborate. How much preparation does a shoot require? What are some of the biggest challenges?
MK: Each series has its own history. Almost all of my shoots are quite extreme due to the fact that I often shoot with animals or in bad weather, and then unusual things are always happening on the set. I cannot recall a single quiet and comfortable shooting.
My photos only seem complicated. Usually preparation for a photo shoot does not take much time. Quite often, we dress the model ten minutes before the shoot. It just takes a lot of imagination. The hardest part is the process of shooting; there can be difficulties with open locations, with the variability of illumination, with the weather.  When filming with animals, there’s always the risk of very bad tempers!

FM: There seem to be several prominent Russian photographers working with fairy tales right now. Do you feel like you’re part of a movement at all?
MK: We have photographers who take photos in the fantasy style. I love their work and am glad that in Russia there are people doing interesting things.

FM: Where do you do most of your shoots? Do you have any favorite magical locations you use repeatedly?
MK: I’ve been travelling abroad more and more lately, to film in exotic places (exotic for me!). I love Europe, and the spirit of the Middle Ages. For filming, I might go to Prague again.

FM: What are your future plans?
MK: I dream about making amazing photos in every part of the world.

Learn more about Kareva at Kareva-margo.ru.