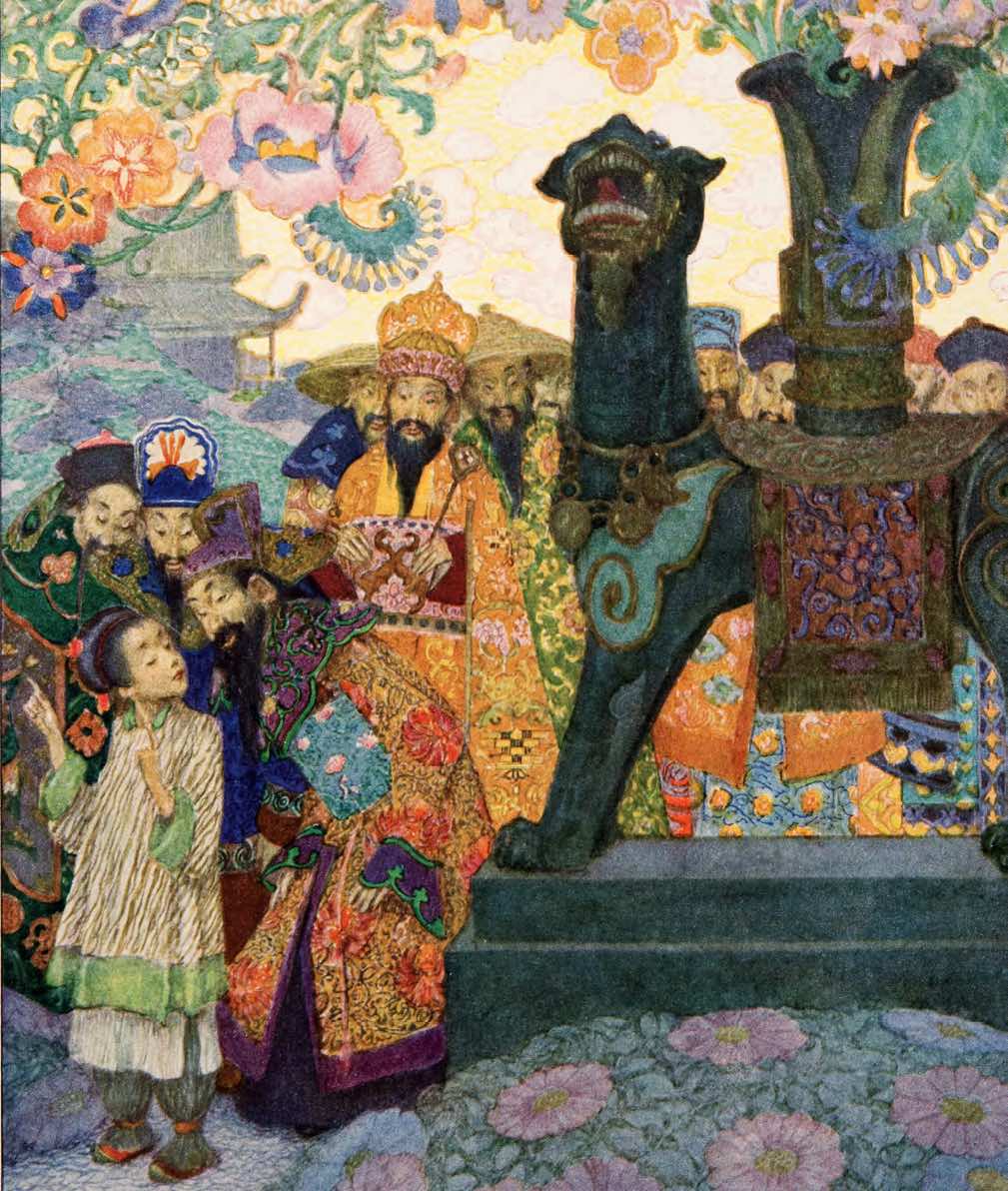 BY SARA CLETO AND BRITTANY WARMAN
Illustration: The Nightingale from Tales by Hans Christian Andersen (1911), by Heinrich Lefler and Joseph Urban

Despite their reputation for being short, sweet, and simple, fairy tales can be magnificently enchanting, even decadent. Their lavish descriptions and beguiling atmospheres stay with you, informing your aspirations and understanding of luxury well into adulthood. We’ve put together a list of some of the most decadent tales out there, plus some of our favorite passages to give you a taste.

“The White Cat” by Madame d’Aulnoy

Madame d’Aulnoy is famous for her unbridled descriptions of beautiful rooms, beautiful clothes, and beautiful people. The Grimm brothers, who believed that fairy tales should be sparse, flat, and simplistic and who notably do not appear on this list, dismissed her tales out of hand for their extravagant wordiness. This, of course, makes them prime examples of what decadent fairy tales can be. For this list, we’ve chosen the tale “The White Cat,” a story that not only features several of d’Aulnoy’s loveliest passages, but also invites us into a world where cats live in the lap of luxury. Here, for example, is the description of a prince’s first sight of their castle: “Guided by the light he came to the gate of the most magnificent castle that could ever be imagined. This gate was of gold covered with carbuncles, the pure and vivid light of which illuminated all the neighborhood. It was this light which the Prince had perceived at a great distance. The walls were of transparent porcelain, of several colors, on which were represented the histories of all the Fairies from the beginning of the world to that day.” How gorgeous does that sound?

“Beauty and the Beast” by Gabrielle-Suzanne Barbot de Villeneuve

The most famous versions of “Beauty and the Beast” (Madame Beaumont, and later Disney) provide only a glimpse of the glitz, glamour, and opulence on display in the oldest literary version, written by French novelist Gabrielle-Suzanne Barbot de Villeneuve in 1740. In Villeneuve’s tale, we get intricate descriptions of the Beast’s castle, otherworldly cabaret entertainments, and the extravagant fashion of the time. When Beauty and her father arrive at the Beast’s castle, they “found themselves in an avenue of orange trees. At the moment that they entered it the fireworks ceased. The illumination was, however, continued by all the statues having in their hands lighted torches. Besides these, lamps without number covered the front of the palace, symmetrically arranged in forms of true-lover’s knots and crowned cyphers, consisting of double LL’s and double BB’s. On entering the court they were received by a salute of artillery, which, added to the sound of a thousand instruments of various kinds, some soft, some warlike, had a fine effect.” Orange trees! An artillery salute! Excess! It’s much longer and more elaborate than what we usually expect from fairy tales nowadays, but that’s part of what makes it so enticing and decadent.

“The Fairies” by Charles Perrault

This fairy tale, also known as “Diamonds and Toads,” is so decadent that “with every word [the kind girl] speaks, a flower or a precious stone shall fall from [her] mouth”! Also decadent? The tale’s obsession with morality. Decadence is often understood as a kind of decline, an excess or aesthetic with a moral dimension, and “The Fairies” is all about evaluating a pair of sisters for their morality… and rewarding or punishing them accordingly! The kind, helpful sister is rewarded for her good deeds with an abundance of diamonds, while the rude, lazy sister is fated to have vipers and toads fall from her lips whenever she speaks for the rest of her life.

“The Birthday of the Infanta” by Oscar Wilde

We couldn’t possibly write this list without including a tale from the master of decadence, Oscar Wilde. While any of his tales could probably make this list, consider this description of the sumptuous outfit of the Infanta herself in his tale “The Birthday of the Infanta”: “Her robe was of gray satin, the skirt and the wide puffed sleeves heavily embroidered with silver, and the stiff corset studded with rows of fine pearls. Two tiny slippers with big pink rosettes peeped out beneath her dress as she walked. Pink and pearl was her great gauze fan, and in her hair, which like an aureole of faded gold stood out stiffly round her pale little face, she had a beautiful white rose.” Pure opulence! The Infanta’s elegance, of course, conceals a heartless nature the reader only truly understands at the end of the story. “The Nightingale” by Hans Christian Andersen – Andersen’s tales are typically well known for their grim tragedies, not their decadence, but we think his story “The Nightingale” deserves a spot on this list. In the story, a wealthy emperor, with all the riches he can imagine, becomes enamored with the song of the simple nightingale. Instead of being happy with what he has, however, his attention shifts to a mechanical nightingale, “an artificial nightingale most like the real one except that it was encrusted with diamonds, rubies, and sapphires.” Believing the fancy version to be far superior to the original, the emperor realizes his mistake only on his deathbed—an example of the dangers of decadence gone too far!

And one last recommendation:

The Bloody Chamber by Angela Carter

The fairy-tale retellings in Angela Carter’s collection The Bloody Chamber are the most truly decadent fairy tales we know. They are awash with an overripe luxury that has already begun to crumble and decline, yet still holds a spellbinding power. In “The Tiger’s Bride,” a retelling of “Beauty and the Beast,” the unnamed narrator describes arriving in the south after a life spent in the chilly north, saying, “Everything flowers; no harsh wind stirs the voluptuous air. The sun spills fruit for you. And the deathly, sensual lethargy of the sweet South infects the starved brain; it gasps: ‘Luxury! more luxury!’ But then the snow comes, you cannot escape it.” In her “Sleeping Beauty” tale, “The Lady of the House of Love,” the vampiric sleeping maiden lives in a ruined chateau whose decaying splendor only enhances the maiden’s unnatural beauty. These fairy tales are a gorgeous, entrancing exploration of decadence, so grab a copy and a goblet, curl up by a warm fire, and prepare to lose yourself in their magic.

What tales do you think are the most decadent? Are there any lavish descriptions that have taken root permanently in your imagination?

Out of the Hatch