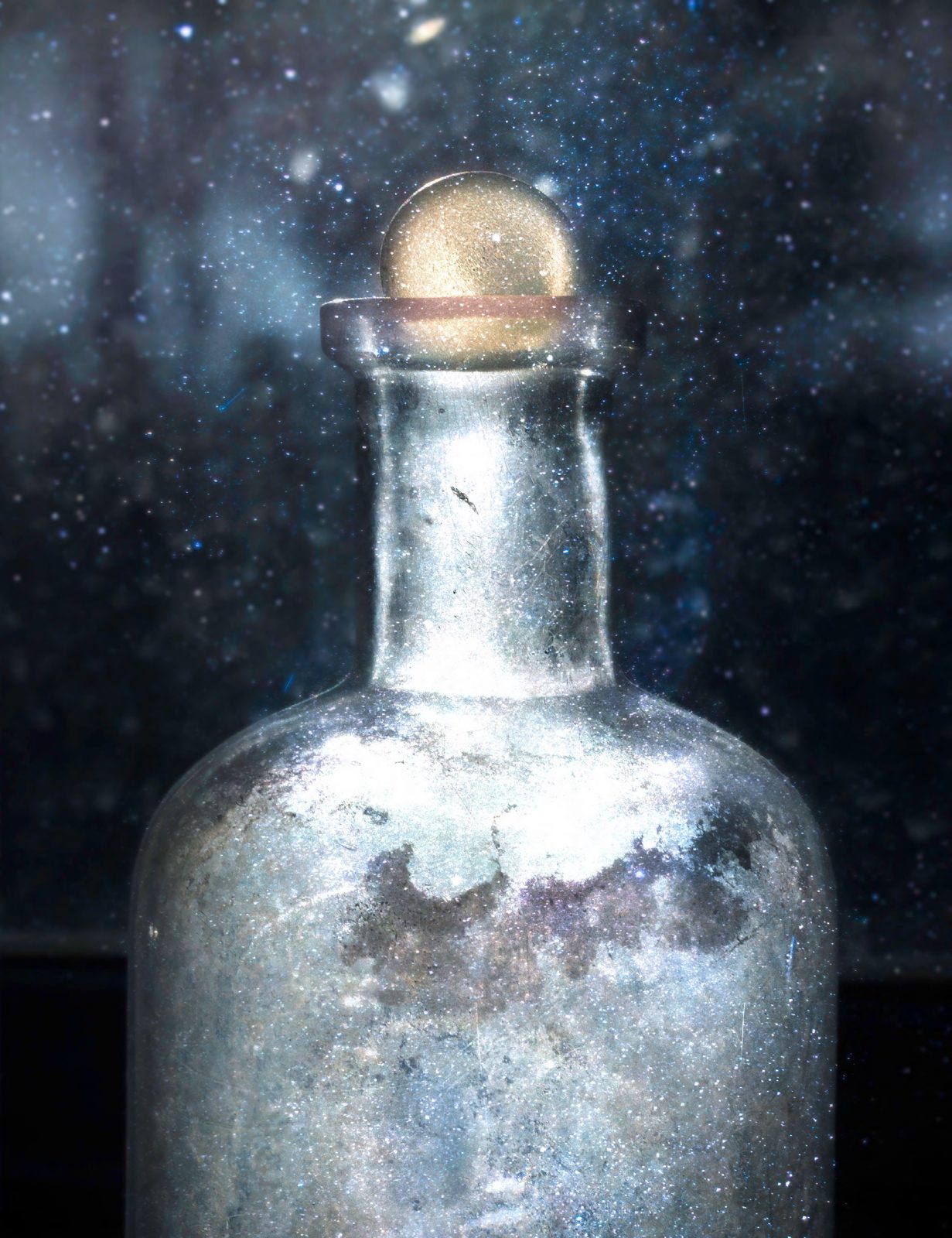 I am a forest dweller. A child of dark, shadowy trees dripping in moss, and at home along the creek side, where elves mingle with the deer among the sword fern. It is within this protective bower of forest, in Pacific Northwest Washington, that my husband and I raised our three children. As small children, they rambled and played among spidery vine maples, romped about in stony river beds, and read books under dappled skies. And though none of us would trade away our home in its enchanted forest setting, there are times when spring clouds boil and churn around the mountains that guard our tight valley, and we feel the tug of ocean’s tide—a siren’s cry mingled with mountain song that leads us on an hour-and-a-half journey to the Salish Sea. As we drive out of the forest and into the open wide farmlands of the Skagit Valley, I always look back. The branches of the maples and large conifers sway as if waving goodbye. “We understand,” they seem to say, “and we’ll be here when you return.”

My husband, more than any of us, is drawn to the Salish Sea because he was raised near its rocky shores by fishermen who worked with and against the sea’s fickle moods to scratch out a living. When my children were small, they liked the change of scenery. For them it was an adventure. For only in such a place could they sift the sand for lost treasure and scout the surf for sea serpents. My reasons to walk the stony beaches among the driftwood and bull kelp are far more romantic: I go to collect mermaid tears, more commonly known as sea glass.

I first started my meager collection of sea glass as a young teen when, on a family outing to West Beach, I inadvertently came upon a green gem. I picked it up and admired it in the sunlight.

“Looks like you found yourself a mermaid’s tear,” a beautiful old woman said to me. She had long gray hair that lashed at the air.

“Well,” she said, “did you know that if a mermaid happens to fall in love with a sailor, she swims alongside his ship in order to protect him? Mermaids become very attached to the men they love.” She looked out at the rolling surf. I remember seeing a longing in her eyes that made me suspect that she herself was enchanted. “But you see, my dear,” she continued, “the mermaid’s love of another made Neptune very angry. He was a jealous god.”

She reached for my treasure. “May I?”

She rolled it around in her palm and then said, “The poor mermaid, banished and with a broken heart, would cry. Her tears would crystallize and wash ashore as these.” She handed my treasure back to me. “Enjoy your sea glass,” she said and winked before walking away.

Of course, in actuality, sea glass is a product of human pollution—mostly glass containers and tableware that have accumulated in our oceans as part of refuse dumps or shipwrecks. The broken pieces are washed and tumbled by the churning seas, a process that takes decades, before washing up onto the shore, transformed into beautiful rounded, frosted gems.

For me, it’s all about the color—not for the aesthetics (well, maybe a little) but for the story it tells me about the piece. How did the gem start out in life? Who loved the object and why did it end up in the sea? Here is a list of sea glass colors and what they might mean, from the most common to some of the rarest: 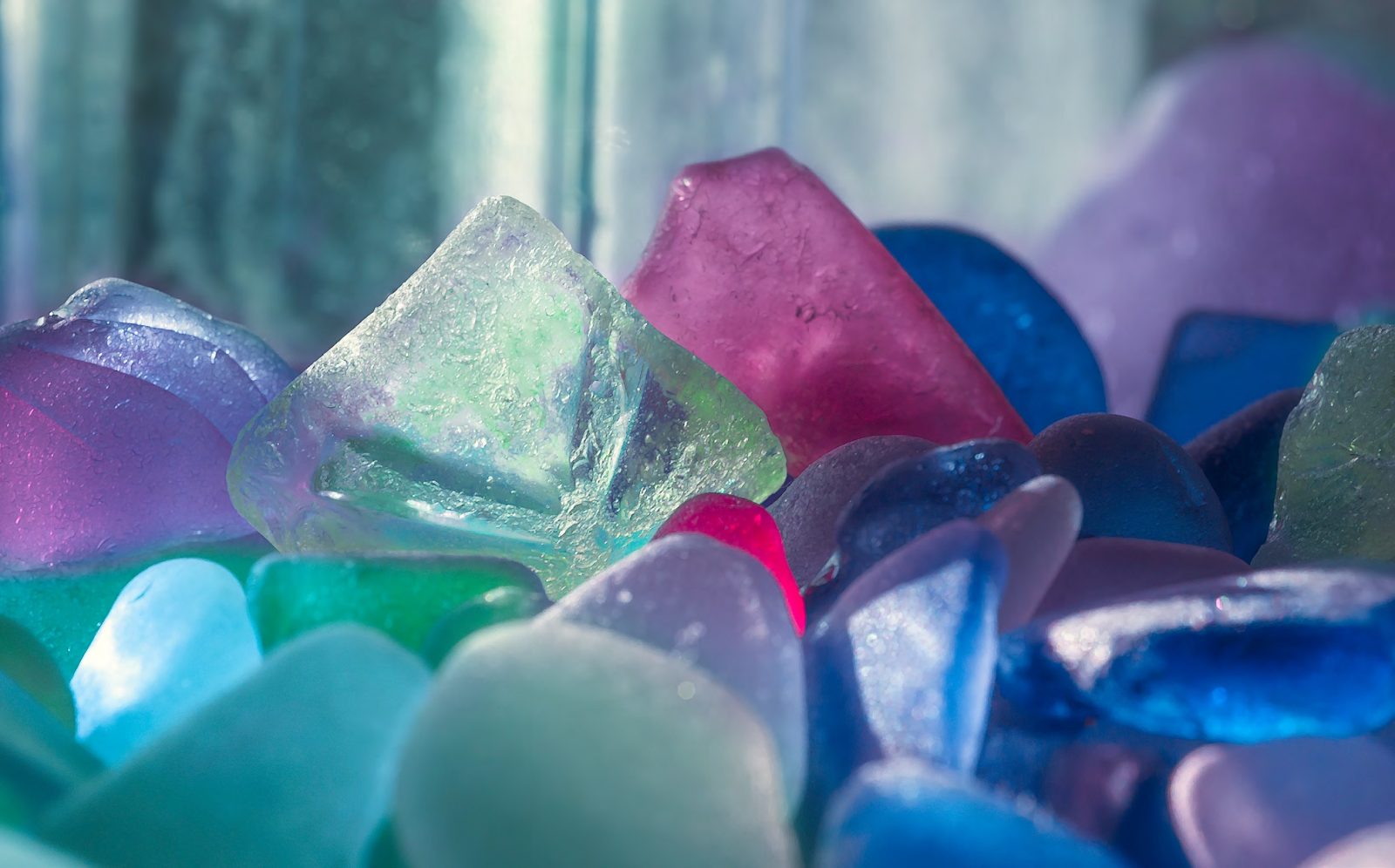 White (from clear glass): Most sea glass found today will come from broken or discarded clear glass: anything from a soda bottle tossed overboard to the old, warbled glass windows of a lighthouse keeper’s cottage, long taken by the sea.

Brown: If you find a piece of brown sea glass, it may have been the remnants of a beer bottle left behind from a beach party, or maybe an early 20th century Lysol bottle or Clorox bleach jug.

Kelly Green: This is a common color for wine bottles and some beer bottles. If you’re lucky, though, you may find a piece with bubbles or an embossed texture that could indicate it came from a pharmacy bottle dating from the 19th or early 20th century.

Seafoam Green: If you find a piece in this beautiful shade of light green, it more likely than not started out as a mid-20th century Coca-Cola bottle. But it may have also started out as a wine bottle set adrift accidently by lovers on a romantic midnight sail. If bubbles are present, it might be something much older.

Cobalt Blue: Approximately one in every 250 pieces are this rich shade of blue. This jewel-like colored stone may have started as a holder for medicine, poison, Vicks VapoRub, milk of magnesia, or even perfume.

Lime Green: Lime green pieces may have started out as beer or lemon-lime soda bottles, or perhaps as decorative glass pieces that ended up on a garbage barge.

Lavender: Lavender glass is easy to date because it was produced with manganese, which was used in the U.S. to neutralize the natural green tint of raw glass until just after World War I. The lovely color is the result of sun exposure. Most common lavender glass began life as a canning jar.

Pink: These pretty finds were most likely a part of Depression-era glass collection. The affordable glassware was often given away as gifts with purchases at gas stations and movie theaters or as incentive pieces by cereal and laundry companies in the 1930s.

Yellow: Another rare and lovely find that may have originated from Depression-era glass or old glass insulators made with selenium.

Gray: If you find a piece of gray sea glass, you most likely have found a treasure whose previous life was as a television screen or a piece of leaded glass tableware or Depression glass.

Black: At first glance, you might mistake a piece of black sea glass for just another beach pebble. But hold it up to the sun: See that deep green translucent glow? Black sea glass originated as very dark olive-green bottles or jugs that were widely used in the mid-19th century for ale or beer.

Red: This lovely rarity (about one in every 10,000 pieces) could have started its life as a 1950s Schlitz Beer bottle or maybe as a decorative ruby glass piece collected lovingly by a lighthouse keeper.

Teal: These rare beauties are usually from older sources. If you’re lucky enough to find a teal (or turquoise) piece of sea glass, it may have come from a canning jar that once lined the pantry of a cottage near the shore. Or it could have been an insulator from an early 20th century electric pole or an old seltzer bottle.

Orange: If you find one of these elusive treasures, it could have originated from a modern automobile’s warning light or a vintage decorative glassware or art glass piece. Orange is believed to be one of hardest and rarest to acquire because it wasn’t a very popular color for mass production.

I have yet to find a black or orange piece of sea glass, but I know that with time, if I continue to explore the beaches along the Salish Sea, I will find those tears and gather them up. My family and I will all climb back into the car and drive along roads through the wide-open farmland back toward the cloud-covered peaks that frame our forest home. As we get closer, I will see the swaying branches of giant maples and ancient conifers that seem to wave, “Welcome back. We missed you.” I will place the tears in pretty jars, along with the rest of my collection, on the window sill where they will gleam in the morning sunlight, forever a reminder to me of the power of Mother Earth and the beauty of transformation. 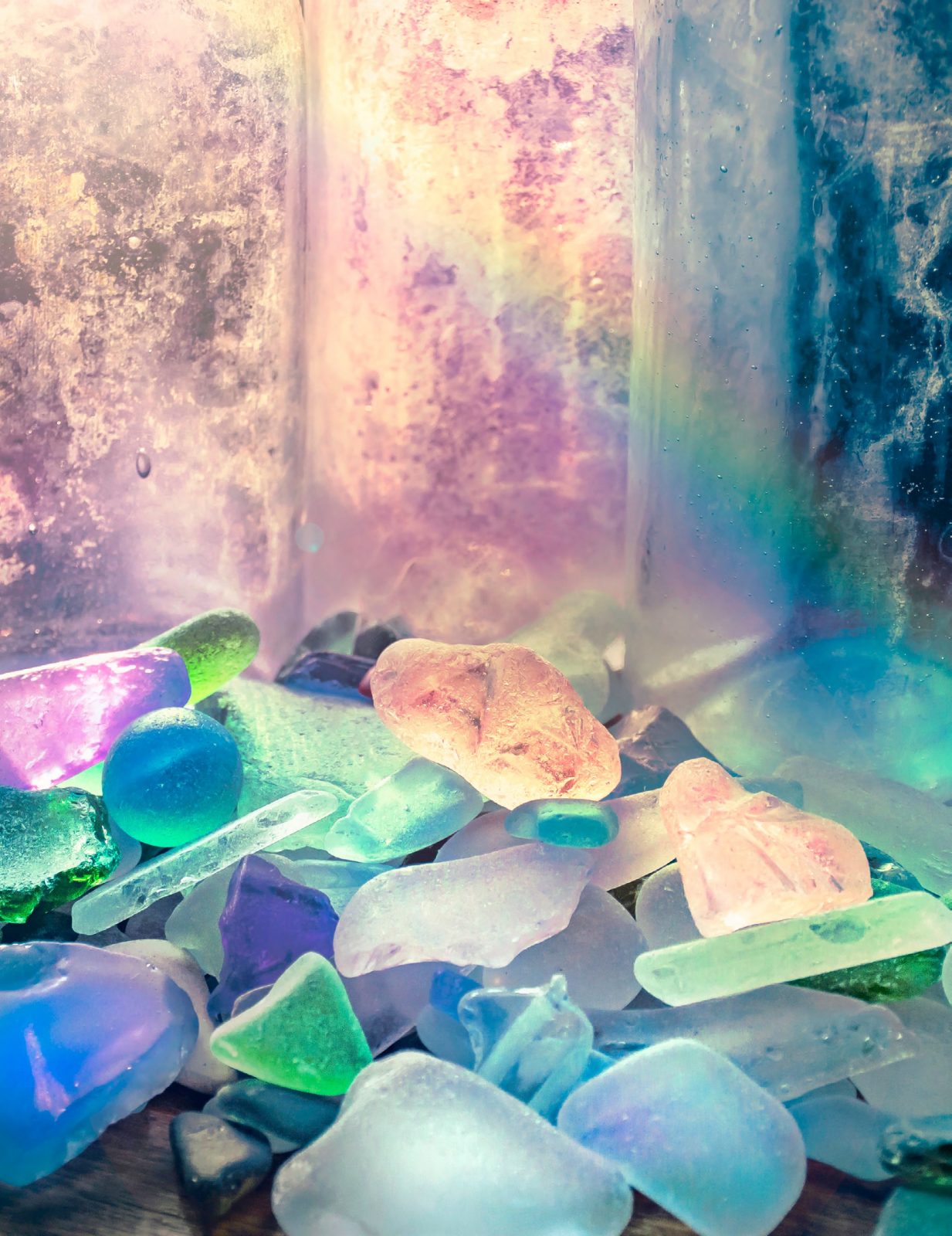