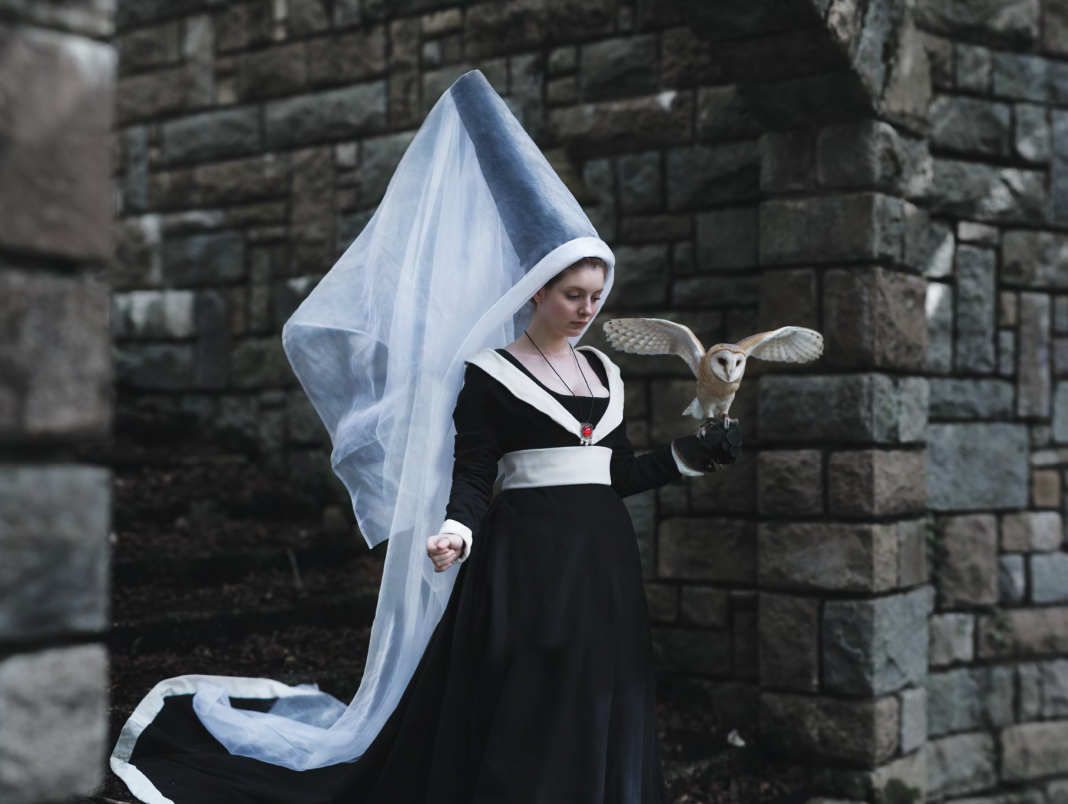 One of the greatest draws for modern people to the Romantic past is a fashion aesthetic dramatically different from our own. It’s true for everyone, though women typically more readily admit they adore the idea of flowing silks and wools, rich brocade skirts, and hats trailing epic yards of linen gauze veil. With that understanding, the Seamstress of Rohan has become not only a sensation on Instagram but a coveted maker of historically inspired clothing through their online store.

The Seamstress is two designer-tailors, Maite Pizà and Emerita Martínez, who also incidentally serve as their own exquisite models. The gifted pair met in their native Mallorca, where they created their business and larger artistic project. Now Martínez is based in the UK, where she studies clothing and costume at Huddersfield University in West Yorkshire. Pizà, who studies English literature, also teaches English in Mallorca. While Martínez learned and honed her craft at university, Pizà started sewing with her mother at home. Both are additionally self-taught through personal dedication.

Together, they conjure glorious couture creations spanning centuries in time, from the mystic, medieval swish of houppelandes à la the White Queen to Poldark-influenced 18th century British shorelines and hemlines and beyond. Patterning is one skill requiring mastery, sewing another; building an aesthetic on their level and taking it to the next step is artistry—a gift that can’t entirely be learned.

Martínez and Pizà, in one voice, spoke to Faerie Magazine about their work and inspiration.

Faerie Magazine: Tell me about the locations you’ve used to photograph your medieval images.
Seamstress of Rohan: We are lucky we can shoot in a great variety of places with amazing historical heritage. To us, if the location doesn’t communicate the feelings we’re looking for, then the project isn’t complete. We select very carefully where we shoot: It wouldn’t make sense to us to shoot a Renaissance costume in an obviously Rococo setting. Our medieval pictures in the magazine were shot in the north of Catalonia, in the city of Girona, whose cathedral has an amazing witch legend— and there’s an abandoned chapel in the woods. Also, we’ve shot in the south of France in an abandoned château and the woods; in forests and castles in Mallorca; in Loch Ness and the Eilean Donan castle in Scotland; and in the magical town of Sintra, Portugal.

FM: What inspires your designs?
SR: It can be as simple as a painting or a drawing, or an old novel triggering a whole lot of feelings and ideas. Then we do a rough sketch; think about possible fabrics, textures, and colors; and the whole project starts to take shape. What we think is important is our artistic point of view in the designs—the pictures must absolutely tell a story. Fashion photography is not enough to portray the atmosphere we want to share.

FM: Do you find the patterning and construction an enjoyable challenge?
SR: It depends on the period. Medieval clothing is simpler in terms of pattern shapes, although more complex when it comes to handwork. It’s also difficult to re-create, in the sense that there are a very small number of extant pieces of clothing. We also love more structured looks from the Renaissance and 18th century periods, which can be a huge challenge. All in all, each period has its own appeal, whether it’s patterning, construction, layers and layers of fabric … we love it all!

Read the full interview with
the Seamstress of Rohan in the Winter Issue:  Print & Digital