On the craggy west coast of Ireland in the 16th century, between the sloping green and misty valleys on one side and the crashing waves of the wild Atlantic on the other, nestled the barony of Murrisk. In those days the O’Malley clan ruled the barony with a spirit that matched the rowdy landscape, and no one was more ferocious or powerful than the daughter of their chieftain. Her name was Grainne O’Malley. And before she destroyed gender barriers through the cult of her personality, before she grew into a feared and famous warrior, before she was mostly forgotten to patriarchal history, before her achievements sank into the murky memory of legend, before all that, she was a brave and defiant girl who stowed away on her father’s ship… 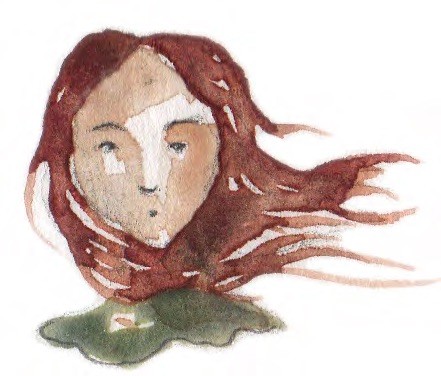 Grainne pushed her whole face out of the sail and looked down at the assembled crew  beneath. Every man was on his feet, and many already had their weapons in hand. Suddenly there was a lot of shouting and commotion, but she still couldn’t see what was happening. Her stomach swooped with excitement. She pushed her arms out of the sail, held her knife blade between her teeth, and grabbed on to the yardarm above her. She wiggled out of her hiding place, wrapped her arms and legs around the yardarm, and then righted herself, so she was on top looking down at the deck. She clung there like a knife-wielding, seafaring monkey. Everyone’s eyes were fixed on the two captains, her father and the English stranger, who were standing chest to chest on the forecastle deck of the Queen Maeve. Several English sailors had already boarded the galley, and more were spilling over the gunwale.

Grainne glanced at their visitors’ ship. The gunwale stood a good measure of feet higher than their own hull, and she was half again the length. The O’Malley and the visiting captain were standing too close together. Grainne began inching her way backward down the sloping lateen yardarm, making her way closer to the action below. Now she could hear her father’s words.

“By what right do you board this vessel?” he demanded.

“By what right?” the English captain smirked. He looked around for encouragement, and his men laughed and jeered. “By the order! Of His Royal Majesty the King.”

Now the crew of the Queen Maeve grew restless and rowdy. The O’Malley men shook their weapons over their heads, but their chieftain raised his hand and the men fell silent. Grainne had reached the center of the yardarm, where the lateen met the foremast.

“Old Coppernose Henry has his charms, I’m sure,” The O’Malley said. “But he is not my king!”

The O’Malley men cheered and stomped their feet at their chieftain’s words, and the English sailors onboard began to unsheathe their swords. Reaching down, Grainne removed her shoes, tucking them into a loose flap of the lateen sail below. Then she shifted the knife from her mouth, grabbed the mast, and drew herself up slowly, until she was standing barefoot on the yardarm. This time it was the English captain’s turn to quell his men.

“All right, all right, very well,” he said smiling. “You’re a reluctant subject of the crown, I know that. Your reputation precedes you, Captain O’Malley.”

“Admiral O’Malley,” the chieftain corrected, putting a hand to his own sword hilt, and stepping even closer to the arrogant visitor. “I am descendent of the Irish High Kings, chieftain of these waters, and keeper of the ancient title. You may call me The O’Malley.” Grainne could feel her heart beating so strongly in her chest that she was afraid her father might hear it too and look up at her. She hardly dared to breathe, as her father went on. “Your king and his people are subject to a tax in these waters, Captain.”

The O’Malley men whooped on deck, clanging their daggers and swords together. A few yelled, “Tax him!” Grainne was so still that her body was like the wood of the mast, like she had been carved and created there. She stared down at her father, his forehead just visible over the back of the English captain’s head. Her palms were damp with sweat, but she turned the handle of the knife in her hand, tightening her grip.

The next moment, the ship erupted into chaos. All at once it happened, that the men were screaming and lunging for one another, their daggers glinting and tearing, their faces contorted with the ferocious thrill of battle. Swords rang out against each other, and men yelled, some in pain, some in brutal victory. Grainne kept her eyes on her father. Papa. Over the gunwale and onto the deck of the Queen Maeve, ever more English sailors were pouring. The O’Malleys were badly outnumbered. Her father was bleeding from one shoulder, fighting two men at once, and now a third approached. The chieftain leapt down to the main deck as they descended on him.

Grainne couldn’t see anything of her papa now. All she could see was a knot of flashing limbs and clanging swords around him. She didn’t realize she had let go and left the safety of the mast behind her. She didn’t realize she was creeping forward, gripping the rounded beam of the yardarm with her bare toes. She didn’t realize that she was wielding that blunt kitchen knife before her like a warrior girl. In fact, she was aware of nothing until she jumped.

And then Grainne was there: leaping through the air, the knife clutched fearlessly in her hand, the linen of her shift and tunic floating behind her like wings. Her father saw her descend and he thought for a moment that he was dead and that she was his angel come to take him home. But then she landed with brute force on the English captain’s back, and he staggered but didn’t fall, and Grainne wrapped her legs around him and pulled that blunt kitchen knife in just perfectly against his throat, and then, to make him know the seriousness of her intent, Grainne bit the man’s ear until she tasted blood. She watched as his fingers splayed out and he dropped his weapon to the deck, but such was the hammering of the blood in her own ears that she didn’t hear him cry out. She didn’t hear the silence that fell over the Queen Maeve as slow and certain as the sun.

Every man onboard turned to look at her, but Grainne only stared at her father, who was bleeding in a heap on the deck. The two English sailors with his blood on their blades backed away from the wild-eyed girl who was pressing her knife gravely to their captain’s neck. The O’Malley blinked up at Grainne; he still couldn’t imagine how this was possible, that his daughter was here on the Queen Maeve. He leaned up on his elbows, and Donal Dubh stepped out of the crowd to help him to his feet. The chieftain had a wide, bloody gash on his left shoulder, and his face looked awfully pale, but Grainne could see that only his skin was torn and that nothing vital inside was damaged. With his right hand, The O’Malley lifted his sword to meet Grainne’s blade at the captain’s throat.

“Now sir,” he said. “You will kindly order your men off my ship.”

The English captain tried to speak, but he couldn’t, from the pressure of Grainne’s kitchen knife. She released him and dropped lightly onto the deck behind him. The captain sputtered and coughed, clearing air into his throat. Grainne circled around to her father’s side and watched as humiliation fell across the man’s face.

“A girl!” he said, incredulous.

Grainne drew herself up tall.

“Grainne O’Malley,” she said, dipping into a mock curtsey. “At your service.”