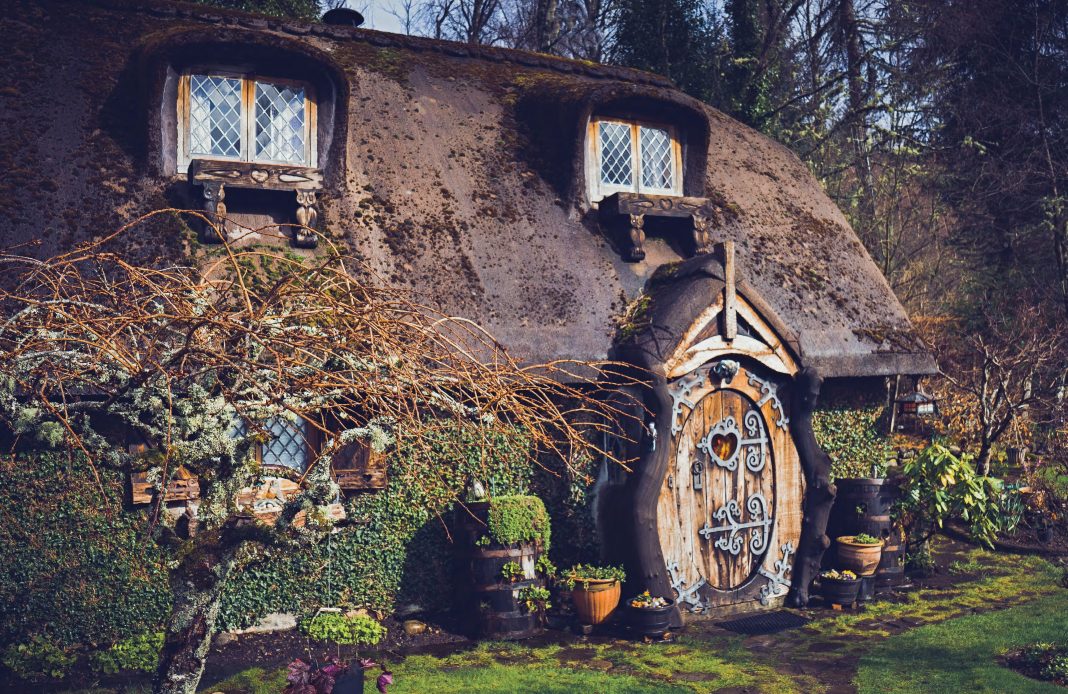 Text and photography by JANNE EIKEBLAD

On a cold and frosty day, I was making my way through Scotland’s winding countryside roads, this time north to the Highlands and through vast woodlands. I was looking for a truly special little house but only knew the name of the nearest village, Tomich.

It took me quite some time to discover this house, hidden in the woods and far away from most modern amenities. But it was just as magical as I had imagined it.

Walking through a gate that looked like a thick ivy portal, I realized I had strolled straight into a storybook scene. Surrounded by woodland was a truly beautiful and enchanting garden and a thatched cottage with incredible details and marvelous craftsmanship. Never before had I felt more as if I had stumbled straight into a fairy tale. Among the barren trees and the bleak colors of the season, the cottage gave off a friendly ambiance—it seemed to be looking out for all birds and beasts, always on the watch for fresh herbs and mushrooms. I knocked on the rounded door and invited myself over for tea. 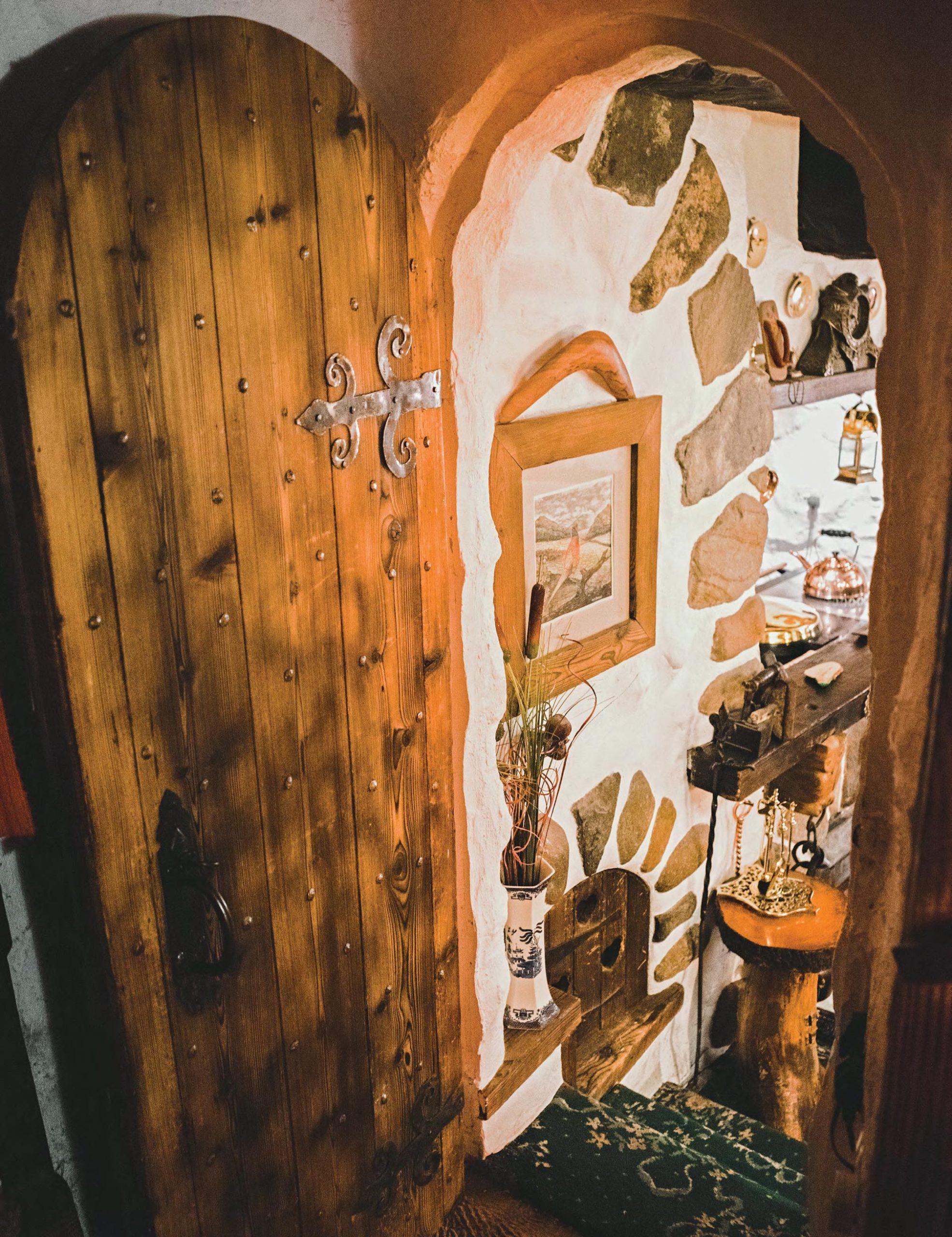 The man who lived there and had built the place—the eighty-six-year-old, five-foot-three Stuart Grant—was actually like a hobbit to behold, with the nicest Scottish accent. Luckily for me, he was happy to meet unexpected visitors and show them around, share old photo albums, and talk about favorite trees.

“It’s so much more beautiful in the spring and summertime,” he told me. “In two months’ time, there will be leaves on the trees and flowers all around it.” But the garden was enchanting even in winter. I can only imagine how perfect it would be in summer, when, Grant told me, he prefers to be barefoot. 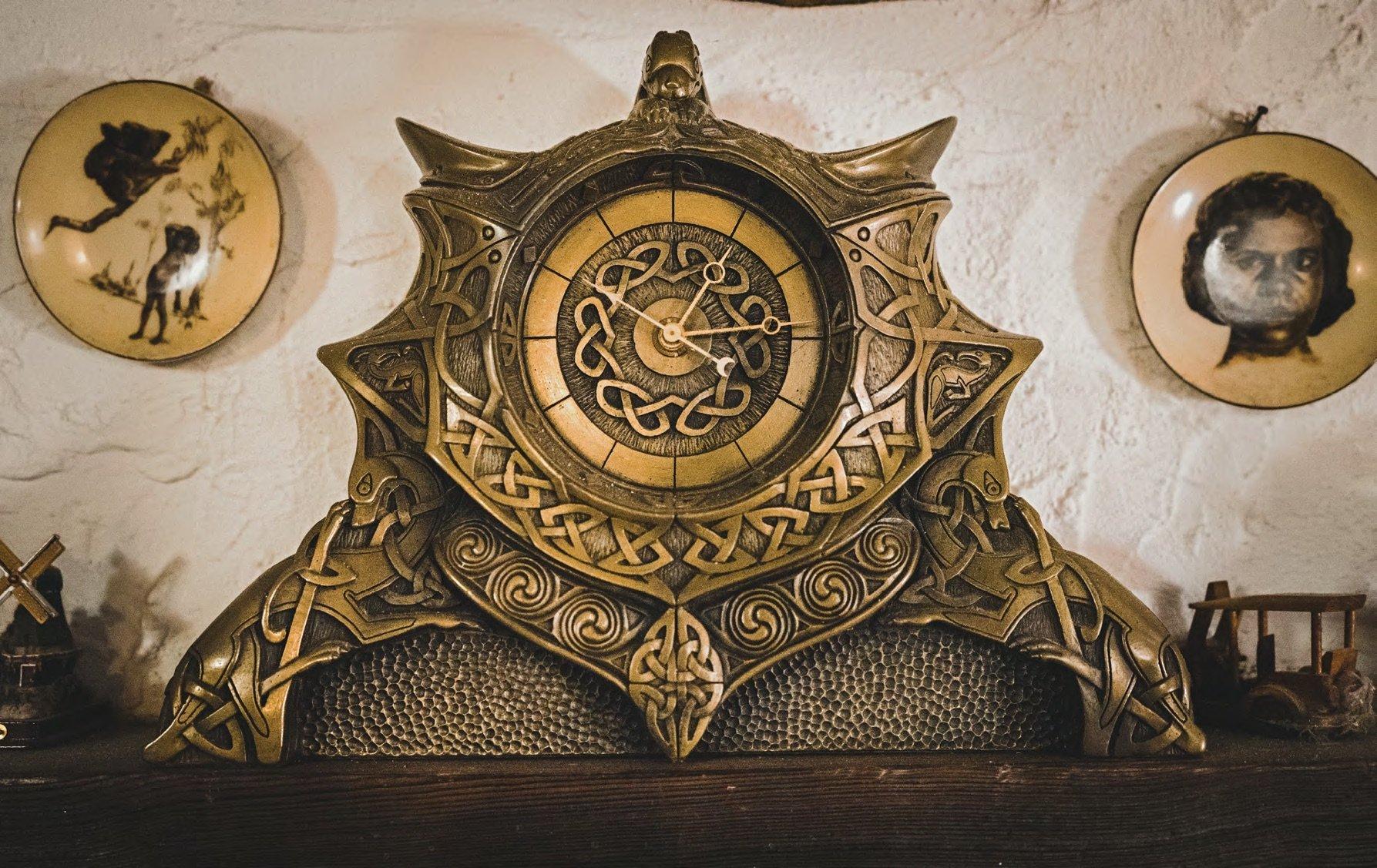 The thatched roof was covered in green moss, and the walls of the house were clad in ivy, with the front door framed by twisted tree trunks. The gorgeous wrought iron details were my favorite, as well as the wooden owls. He showed me ponds with a tiny bridge, his water mill, and his greenhouse. A true sanctuary full of interesting little details.

Inside, the house was cozy, a perfect combination of fine and rustic craftsmanship. Tall people like me had to duck because of the low ceilings. But for Grant, it was all made to measure, and everything was meant to be practical and at arm’s reach.

Grant set about creating his dream home in 1984, when he moved back to Scotland from Australia. But he was broke and suffering physically, so he was living rough with basically no money. Slowly but surely his new home took shape. The house was originally a cowshed at the bottom of his garden. The plan was to move in temporarily while he renovated another house, but he got “carried away,” he said. “And so I ended up like this—it was all a happy mistake really!” 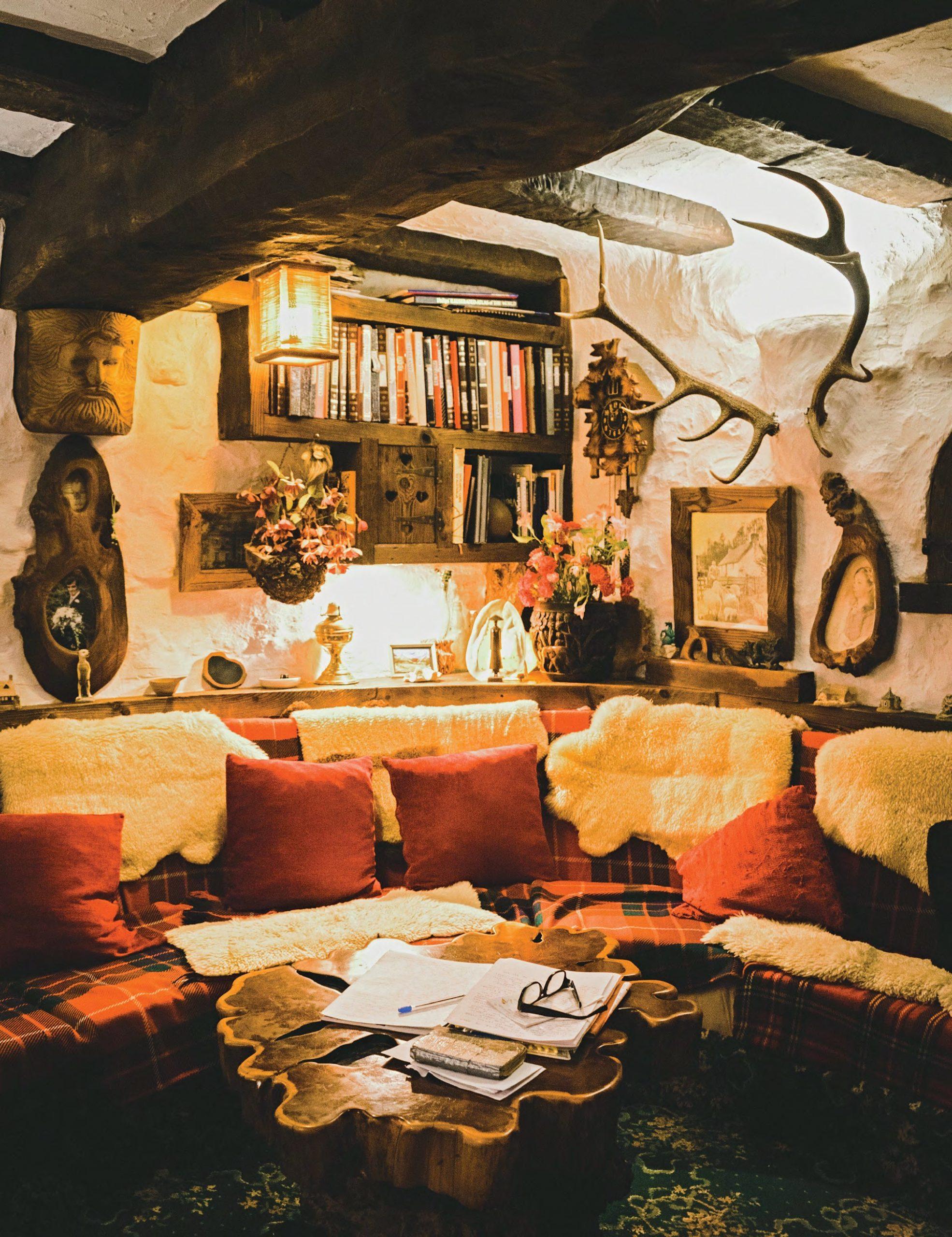 He foraged most of his building materials from the forest and cut it all by chainsaw. Being a retired woodcutter surely has its advantages for being able to build one’s own heaven on earth! “It is made out of other peoples’ rubbish,” he said, “as well as stones from the beach and fallen trees.” He was surprised that anyone else would take an interest in it.

I told him that I had heard it described as a hobbit house, made by a Lord of the Rings superfan. Indeed, the place felt like a scene from one of J.R.R. Tolkien’s books. But Grant claimed he had never read any of them or seen the films, so any resemblance was coincidental. “This isn’t a hobbit house at all,” he told me. “It’s my house!”

But when I asked what he thought about the comparison to Middle Earth, he told me he liked it and appreciated when fans came for a visit. “I’m happy to have visitors. Sometimes people burst into tears on seeing my house because they think it’s so beautiful. It is a nice compliment to have.” 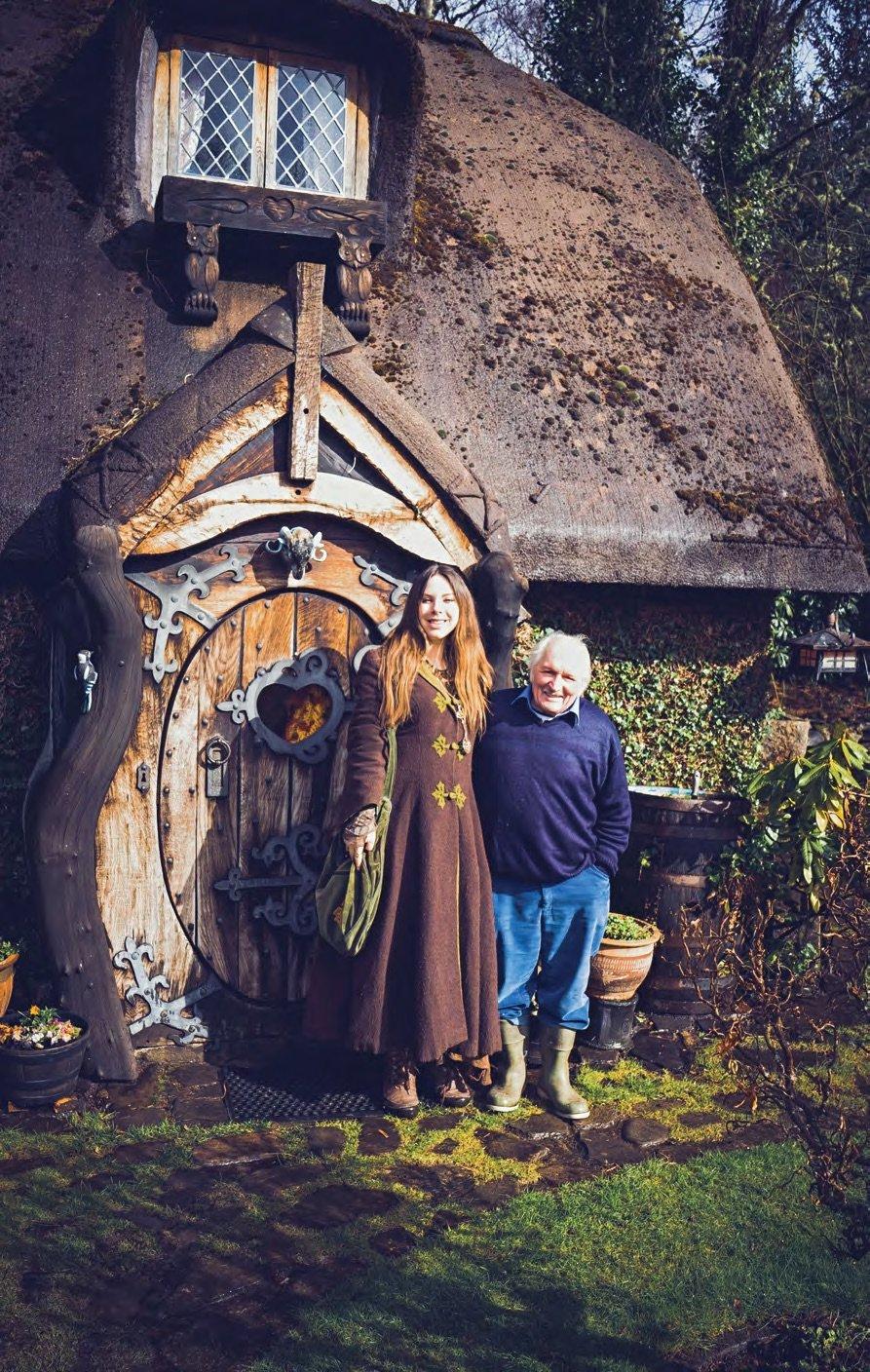 The house is full of secrets: It has been said to be like a cryptic puzzle, as anything high-tech is hidden away inside gorgeous wooden hand-carved artifacts. And I was amazed by all the clever and cool little solutions. You wouldn’t even know Grant had a shower unless he pointed it out to you, and the toilet was encased in a wooden stump. Cute little figurines or seashells doubled as light switches.

There were woodcarvings, gnarly tree-trunk tables, crocheted quilts, a cozy fireplace, nostalgic pieces of porcelain, a winding wooden staircase, and anything else you would expect to find in a real fairy-tale home, made of love. Grant told me that he considered himself one of the luckiest people alive. “I have the house I always dreamed about and live in one of the most beautiful places in the world,” he said. “My life is so rich!” 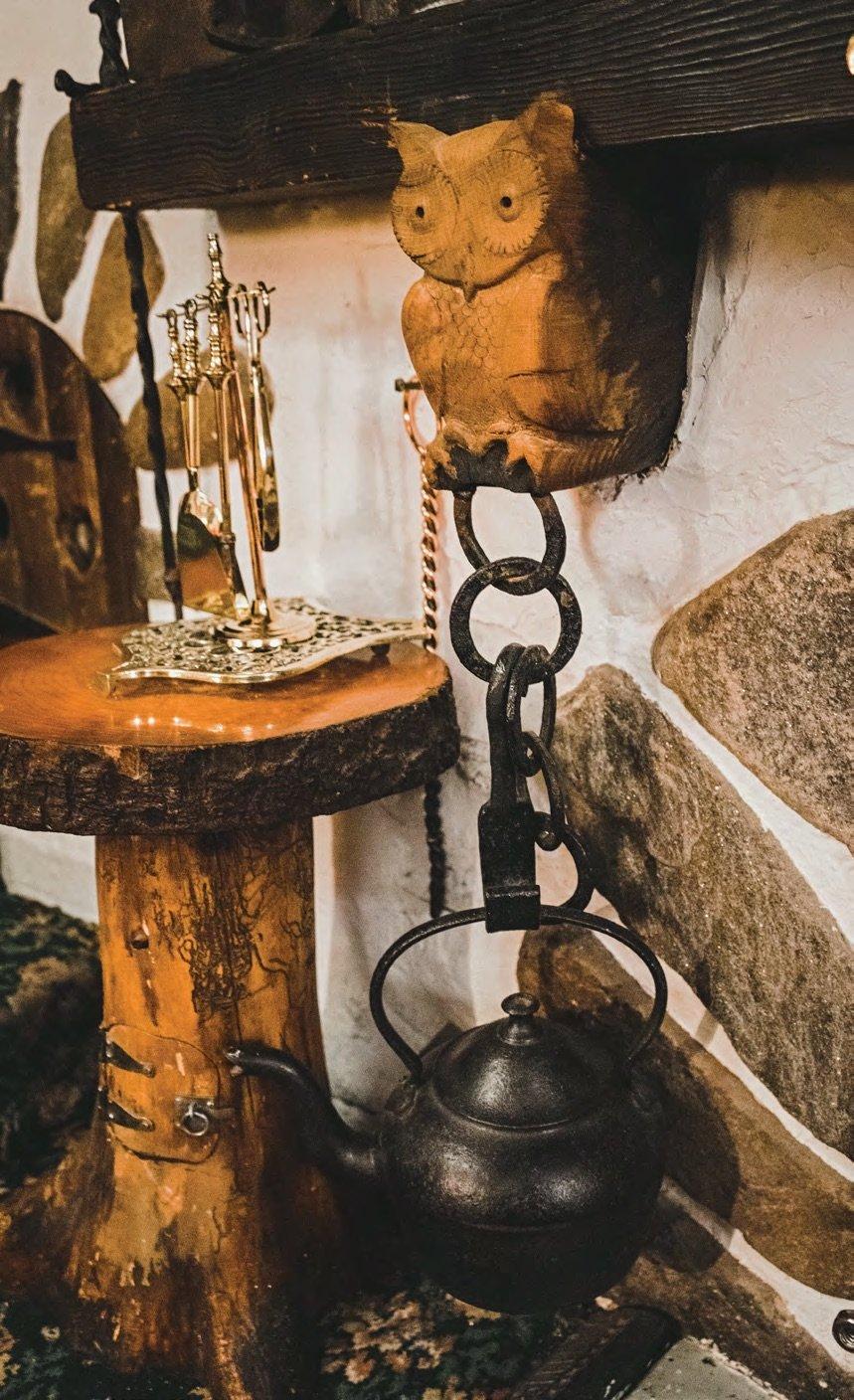