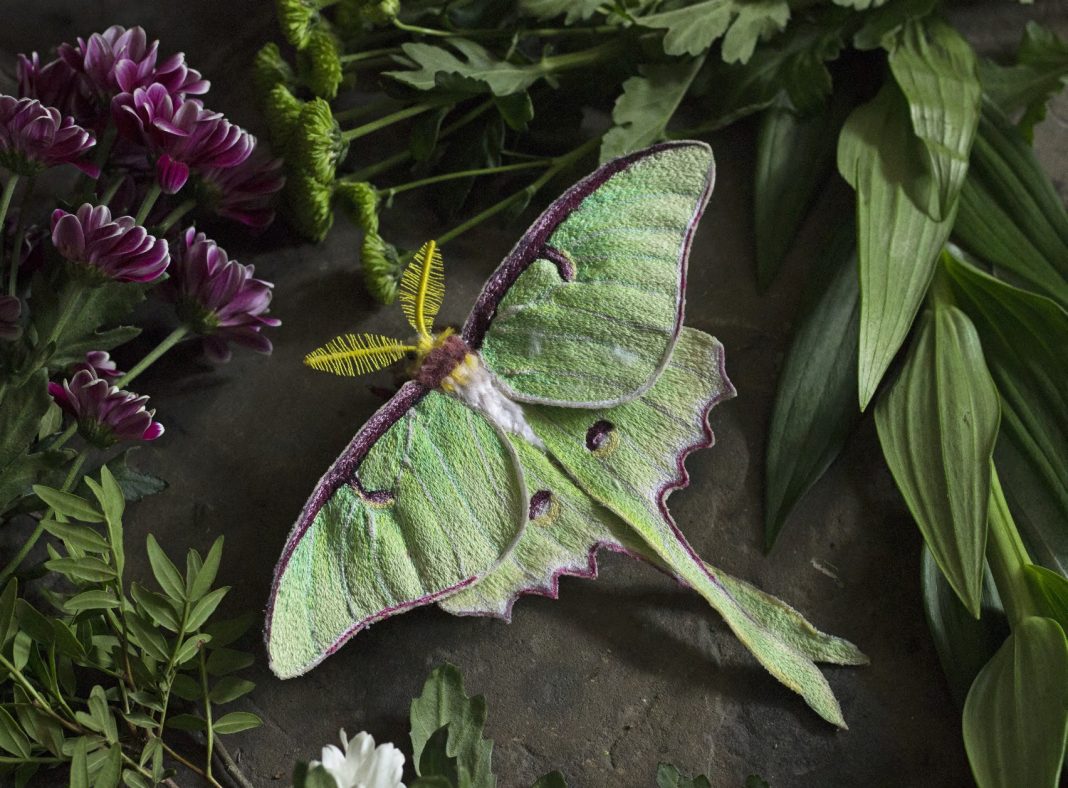 Enchanted Living: Can you tell us when and why you began making embroidered insects and fungi?
Emily Yeadon: My work is heavily influenced by a particular museum that I discovered at the age of eleven while I was studying at a performing arts boarding school in Tring, U.K.. The Walter Rothschild Zoological Museum is famous for holding one of the finest collections of stuffed mammals, birds, reptiles, and insects, and this amazing collection of animals is what triggered my obsession with taxidermy.

I started to re-create faux-entomology collections around four years ago, and created 2-D moth and butterfly sculptures from black beading wire. One evening, I randomly decided to dust off my old sewing machine and rekindled my love for textiles. I gradually began to incorporate fabrics and machine and hand embroidery into my wire creations at the very end of 2017. Adding vibrancy, new textures and techniques to my moths and butterflies really brought them to life and helped them evolve into what they are now.

I love experimenting with mixed mediums and became curious of what else I could create. I started to explore the world of fungus at the end of the 2018 and have become increasingly intrigued by the huge variety of colors and patterns that they have to offer. 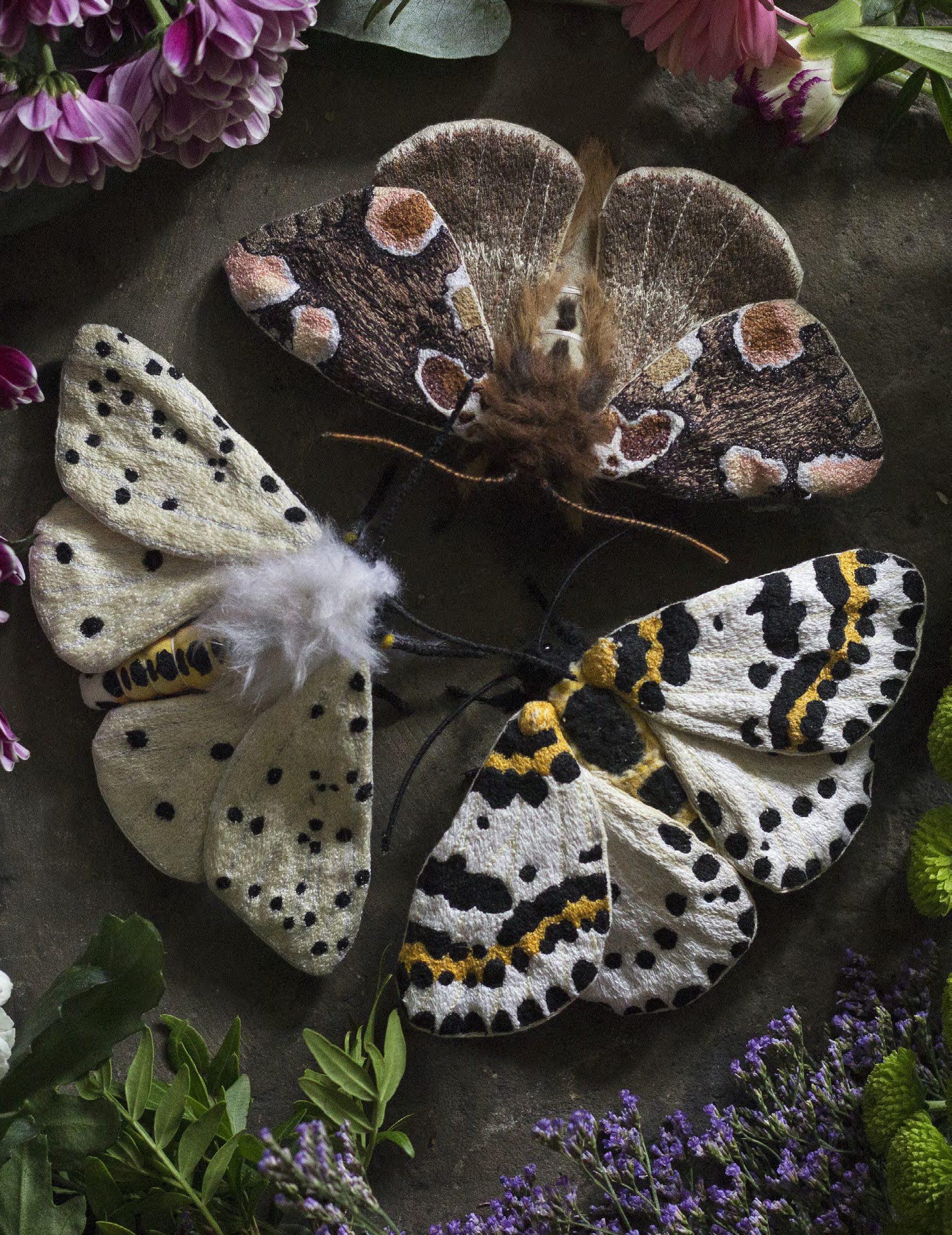 EL: Do you have a special affinity for moths or other creatures? If so, why?
EY: I grew up in a very rural part of the north of England, and I spent the majority of my childhood playing in our secluded and overgrown back garden. I was absolutely fascinated by animals, and I was desperate for them to be my friend.

I would spend most evenings sitting among the branches of an old willow tree, building nests from moss and twigs while eagerly watching the birds nervously flutter around me. I would take photographs of the birds, collect snails and ladybirds in empty jam jars, and build makeshift traps in attempts to catch mice. I’d spend hours studying the creatures I’d find, watching their behaviors and taking note of their colorings and patterns. When the sun set, I’d retreat to my bedroom and draw what I’d discovered that day.

At a young age I became pretty good at identifying birds and insects, and that connection has remained with me.

EL: How and where do you do your work?
EY: I currently work at home in a small village in West Yorkshire called Haworth. I’m a self-taught artist, so the way I work is on a trial-and-error basis. I spend a good proportion of my days researching different species and figuring out ways that I can create them.

EL: Can you tell us a story of how one of your creations came about?
EY: I’m currently making giant garden snails, which I initially thought would be simple to create but, after tons of research and experimenting, it’s ended up being one of the most complex creatures I’ve ever made.

When starting on anything new, I almost always begin by researching three things: the creature, its colorings, patterns, and structure; the techniques I’ll need to use; and the materials I’ll require.

When creating the snails, I began by collating images and watching lots of videos of snails in the wild. As I began to ponder over how I would re-create them, I was immediately presented with my first obstacle. Being completely self-taught, I have little to no experience in creating fabric patterns, and I was now faced with designing a three-dimensional spiraled sphere from fabric. I scoured the internet for any advice (which I couldn’t find) and was ultimately forced to improvise. I created at least four prototypes of the shell, experimenting with different fabrics and dimensions. Finally, I landed on the jackpot design.

My next challenge was to figure out how I’d replicate their colorings, patterns, and textures in the most realistic way. This led me on to experimenting with the application of various paints and glues to create the hard shiny shell and slimy looking body.

After a couple of days of researching and experimenting with different techniques and materials, I finally felt confident in creating my first snail. Referring to my prototype snails, I was able to create a template of my most successful pattern, which made it much easier and quicker for me to re-create a family of identical looking snails. I’ve continued to make small changes to my process here and there, but ultimately, after a lot of dedication, I’m really pleased with how they’ve turned out. 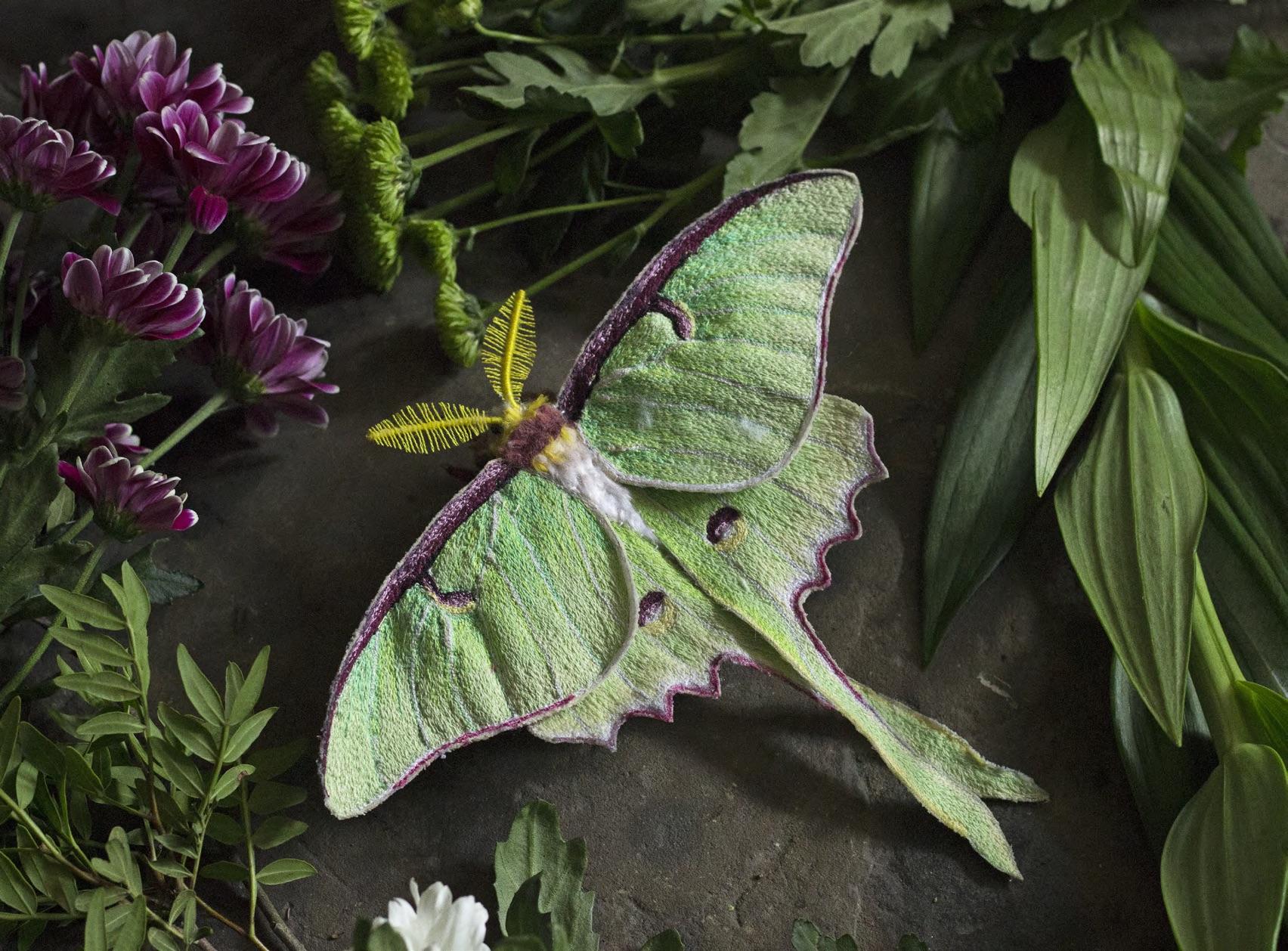 EL: Are you inspired by the forest specifically?
EY: Woodlands and forests are a huge inspiration for me. I regard them as being my “magical place,” a place deep in nature that awakens my imagination.

When I was younger, my parents would take me and my sisters on a walk to a place they named the Bluebell Wood. We’d spend hours walking through the maze of elegantly perfumed bluebells, while dappled light that shone through the branches of old majestic trees danced around us.

My mum loved Cicely Mary Barker’s Flower Fairies and would often have us gathered around a mound of mossy rocks adorned with wildflowers while she told us sweet stories of fairies who lived there. I often think about how wonderful those walks were, how calming it is to be surrounded by nature and allowing yourself to have a moment of calm to let your mind wander.

EL: How do you incorporate enchantment into your own life?
EY: My favorite way to seek enchantment is by taking long walks. I’ve always loved climbing mountains in the Lake District with my dad and our family dog, Toby. That moment when we finally reach the summit—icy winds whipping around us as damp heavy clouds form a blanket over our view. A peaceful moment in nature, tranquil and calm.

EL: Can you say a few words about the mushroom tutorial? What draws you to mushrooms?
EY: The first toadstool I made was the fly agaric. I’ve always loved this toadstool. The first time I saw one was about ten years ago while I was on a walk, and I was completely fascinated by it. It was so striking against the brown leafy ground. It just seemed completely surreal to me. I remember taking so many photos of it, and I just thought it was the coolest-looking thing. So when I came to making my first mushroom, creating the fly agaric seemed like the obvious choice to me.

I initially began making mushrooms as props for my moths and butterflies to perch on top of. I never intended to make them as stand-alone pieces. But while I was in the middle of creating my first fly agaric, I suddenly realized that I was having so much fun! I remember immediately searching into different types of fungi, and I was mesmerized. I couldn’t wait to start making more. I’m so drawn to how weirdly diverse they are. They’re just so magical and look like they’ve been picked from another planet.

See the tutorial to create these in the Spring Issue. Subscribe | Print | Digital 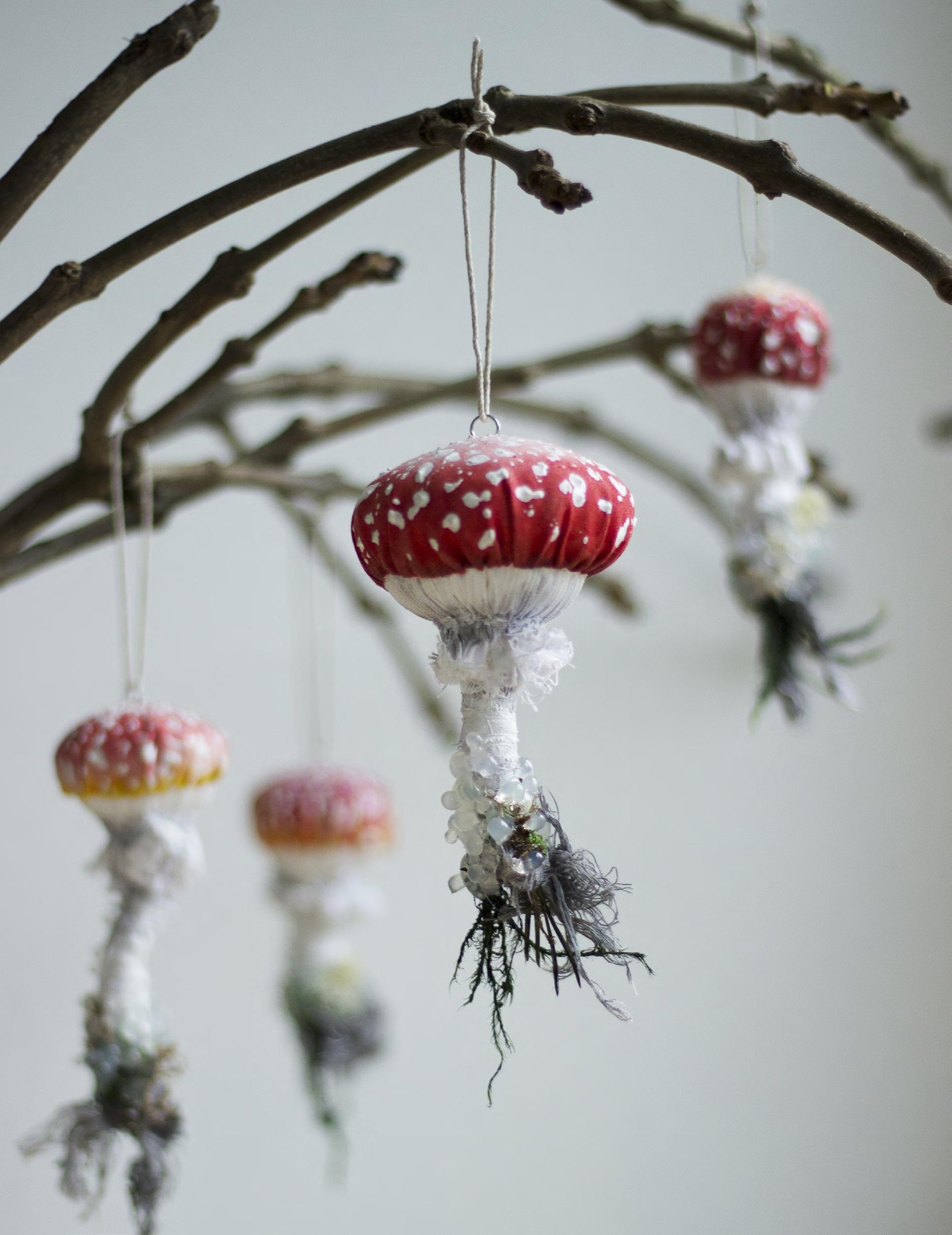