We found Ellen Evert Hopman’s Scottish Herbs and Fairy Lore to be an invaluable resource as we prepared our Outlander issue, which is chock full of herbal magic and medicine, and recently asked her a few questions. Here are her luminous answers: 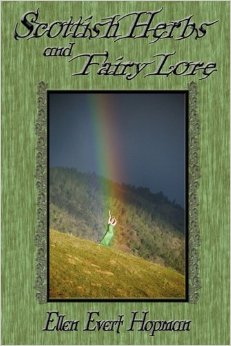 Can you tell us about your book Scottish Herbs and Fairy Lore? What was the inspiration?
I have always been drawn to Scotland and even lived at the Findhorn community for seven weeks in 1983. At the time I had no idea that my ancestors were Scottish. I found out about fifteen years later when my aunt sent me a genealogy report. I have been in contact with distant cousins since then, apparently we are of an old Pictish (pre-Celtic) family. I guess Scotland drew me back like a homing pigeon! As an herbalist I’m fascinated by the Celtic uses of plants. All my books start out as a question, I have to be fascinated by the topic because it generally takes me about two years to finish a book. Some of my books are steeped in Irish herb and tree lore. Scottish Herbs and Fairy Lore was based on my desire to go more deeply into the lore and wisdom of my ancestors.

How did your interest in herbalism begin?
When I was a teenager I had a deep instinctual desire to know how to survive in case of emergency. That was during the Vietnam war era. My family wasn’t at all like that, just me. I made and then set up a tipi during my first year of college and lived in it for two summers. During that time I gradually started wildcrafting edible plants and eventually went on to study herbal medicine, both in Scotland and the US.

And in fairies?
I was introduced to fairies at Findhorn. Now I can hear them singing but I rarely see them. I leave them gifts and sometimes they reciprocate. I have found tiny little abalone shells placed on a stone inside my ritual circle. One time they left a tiny heart shaped leaf. Very simple gifts but obvious once you saw them.

What herbs or plants could one use to lure fairies?
In Ireland and on the Isle of Man elder (Sambucus spp.) is considered a fairy tree and every house had one near the door. It was said that helpful fairies played in the elder branches and if you cut the tree down the fairies would grieve and leave. It’s very bad luck to cut an elder, besides being a favorite of the fairies the elder is also a profoundly medicinal plant.

You can wear a wreath of thyme or add it to the ritual cup to aid in communication with the fairies. Any place where wild thyme grows is a place of power on the earth. It is one of the fairies’ favorite flowers and they like to play in it.

Dandelion is an herb used to summon earth deities and fairies that live underground.

Do whatever you can to attract and protect bees. They are said to be the messengers of the fairy world. Fairies live in hives under a hill and are ruled by a fairy queen, very much like the bees.

Are you a fan of the Outlander books/series?
Of course! I have read every book in the series at least three times.

If you were Claire, and had to restock your herb cabinet in 1700s Scotland, what would be the first plants you would forage there?
Goodness, there are so many! Agrimony for the liver, alder bark for sore throats, self-heal and oak bark for wound washes, bindweed for constipation, calendula for jaundice, cancer and fevers, chamomile for the stomach and nerves, of course rowan berries for chest complaints and for magical protection. There are really too many to name here but you will find a Highland Herbal in the middle of Scottish Herbs and Fairy Lore. Thankfully just about all of those plants grow here in New England.

Claire’s approach is one of healing herbs as a modern woman, what about the folklore uses of some herbs and plants? Are some used as protection/divination/etc?
Probably the most important Scottish herb for protection is rowan (Sorbus spp.) We call it mountain ash here in the US. The American variety has orange berries and the European one has red berries, medicinally they are the same.

Red is the most magical color of all, the color of life and life’s blood, which is why red coral beads and red rowan berry necklaces were once worn for protection. Rowan twigs were bound with red thread to make tiny, equal-armed, solar crosses which were sewn into clothing, hung above the door, or hidden in the home as a charm against evil sorcery.

You could bind ivy, woodbine (Asperula odorata) or bramble (Rubus fructicosus), and rowan (Sorbus aucuparia) into a wreath and hang it over the house or barn to bring protection from witchcraft, the evil eye, and cattle disease. Or make a wreath of milkwort (Polygala vulgaris), butterwort (Pinguicula vulgaris), dandelion (Taraxacum spp.), and marigold (Calendula officinalis), and bind it with a triple cord of ivy, placing it under the milk pail to prevent the milk from being charmed away.

One herb used for divination is the apple. You cut an apple in half and examine the seeds. If they are whole it means good luck, if one seed is damaged it means trouble, and if more than one is cut it means severe misfortune.

I understand that you are Druidess. What does that mean?
The Druids were the educated caste within the Celtic tribes. They were the doctors, lawyers, herbalists, judges, sacred singers and harpists, ambassadors, philosophers, historians, poets and ritual leaders. Every king or queen had to have a Druid at their side. The ruler was usually a member of the warrior class who had been ritually elevated to “sacred” status. We still see this today in the English coronation ritual. The Druid would supervise the coronation rite and advise the ruler on how to be a good king or queen because the Druid knew the laws and precedents.

We still have a folk memory of this relationship between the king and the Druid, kept alive in the stories of Arthur and Merlin.

These days Druids no longer advise royalty, of course, we do the work of keeping the ancient stories and traditions alive. We are the guardians of the wisdom of the past.

Do you have any thoughts on the famous Druid dance in Outlander?
I think it’s lovely. I will say that Druids tend to be about half men and half women, so that dance of women might be a little misleading. But the spirit of it is very nice.

What advice might you give to our herb-loving, Outlander-loving, Scotland-loving faerie-esque readers?
I’d say pick one aspect of the series that you feel passionate about and delve into it deeply. It could be herbalism, or magic, or healing, or past life progressions, communication with fairies, the study of ancient brochs and cairns and Scottish archaeology in general, Scottish poetry and song, genealogy, or any other subject. Try to travel to Scotland and Orkney if you can. Sit in the places of the ancestors. Feel into the stones. Listen to the trees. Touch the sacred soil. Realize that we are all part of a vast stream of lives that celebrated and fought and carried on, just so we could be here today.