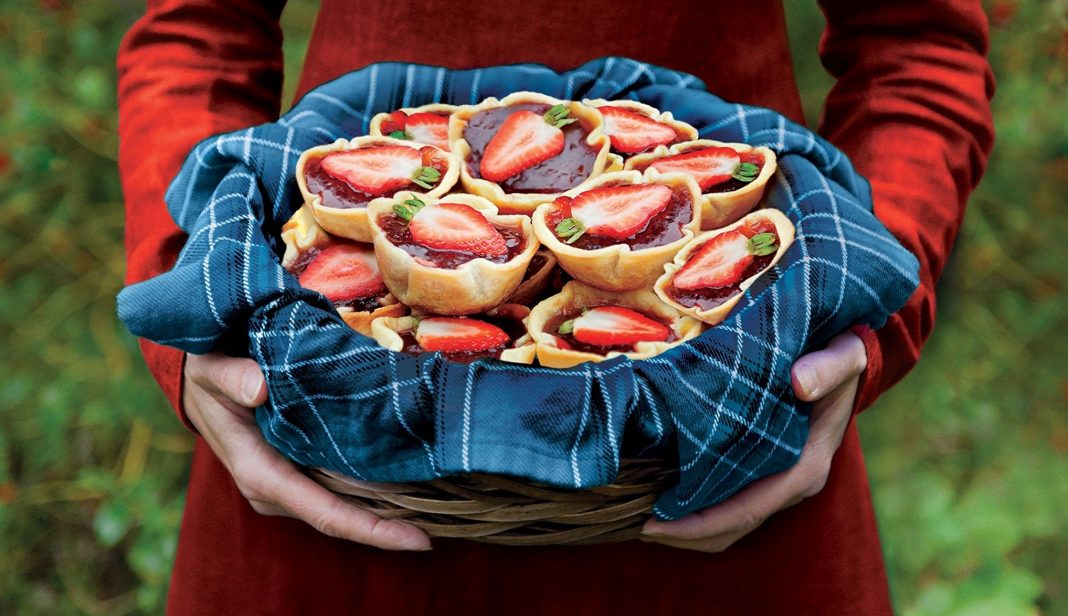 As any fan will tell you, the Outlander books by Diana Gabaldon have many pleasures. Not least among them is how they immerse you in faraway times and places. You can smell the warm liquor and honey, the linen and musk and pine and “sun-warmed stone” of long-ago Scotland, hear the stirring of the trees and the “deep silence of a Highland night,” feel Jamie’s beard stubble under your fingers (!) and the wool on your skin, see the “air like cider and a sky so blue you could drown in it.” You can smell and touch and taste the 18th century. And then there’s the food.

Chef and cookbook author Theresa Carle-Sanders found the Outlander books when she was at a crossroads in her life. She’d just quit a high-paying corporate job that had been stifling her and was throwing herself back into the quieter pleasures of life, like cooking and reading thick novels. “Outlander was waiting for me,” she says. There were five books at that point, and Carle-Sanders read them over the next few months. “They’re cathartic books to lean on when going through change,” she says. “There’s so much emotion, and they can be quite comforting when you’re going through something like that yourself.” And the rich sensory detail—that gorgeous escape in time—didn’t hurt, either.

The recipes came a little later, after Carle-Sanders and her husband moved to tiny Pender Island, off the coast of Vancouver. After a stint in cooking school, she started working in a local restaurant and baking in a farmer’s kitchen. She was walking in the woods one day with her dog when Madame Jeanne’s rolls with pigeon and truffle popped into her mind, and by the time she finished the walk, she’d created a recipe for them—and drafted an email to Diana Gabaldon—all in her head. She thought she might create this recipe and post it on the food blog she’d created, Island Vittles (now outlanderkitchen.com, of course). Gabaldon responded yes to Carle-Sanders’s request for permission and even shared the recipe on her own blog once Carle-Sanders posted it. Needless to say, fans eager to taste the dishes they’d read about in the novels were over the moon. So Carle-Sanders did a second recipe, this time for her delicious Brianna’s Bridies, or meat pies, which are a staple in her home to this day.

“That’s when I started pestering [Gabaldon] about a cookbook,” Carle-Sanders says. What she didn’t know was that Gabaldon was in talks for an Outlander television series. “So when I couldn’t go straight to a cookbook, I asked about starting an Outlander Kitchen blog to prove that there was a market.” There was—especially after Starz announced its television adaptation in 2013 and asked Carle-Sanders to do a themed recipe for each episode of the first season. Her social media accounts blew up, and the cookbook project finally started in earnest.

This would eventually become the best-selling Outlander Kitchen: The Official Outlander Companion Cookbook. When she started work on it, she’d already crafted a dozen or so recipes. To create the rest, she started a handwritten food journal and went back to the Outlander books, noting any food reference or even any sensory reference that hinted at food. By the time she was done, she had 732 notations, which she narrowed down to a final 115. Some were specific dishes, like the “Venison Stew With Tomatoe-Fruits” that came from this Drums of Autumn passage: “Also a large boiling kettle, whose Acquisition we have Celebrated with a great quantity of tasty Stew made with Venison, wild Onions from the wood, dried beans, and likewise some Tomatoe-fruits, dried from Summer.” Other recipes came from simple references to things like “soup” that allowed her to be more inventive, thinking of a perfect dish to complement a specific scene in the books. “Big, emotionally charged events tend to happen around meals” in the novels, Carle-Sanders points out, and those emotions and events often informed her recipes.

Of course, to re-create so many 18th century dishes Carle-Sanders had to do her research—and a lot of experimenting. She and her husband have eaten some “deadly things” in the process, like a recipe featuring two tablespoons of cloves. And some bygone dishes are just inedible today, like the powsodie, or sheep’s head soup. “One historical recipe calls for you to ‘procure yourself a fresh sheep’s head and scrape the hairs from its nostrils with a spoon’,” she says, shuddering.

So she’s had to be creative in making 18th century recipes not only palatable but delicious to the modern reader—though the book contains some more modern recipes as well, even spaghetti and meatballs! “Outlander is a time-travel novel, after all,” she says. As she writes in the introduction, “Outlander Kitchen is not a Scottish cookbook, nor a historical one. It’s an Outlander cookbook, meaning we have two centuries and several different countries’ cuisines to explore.”

Still, there was a lot of 18th century to reckon with, and one of Carle-Sanders’s favorite dishes, she says, is one of Outlander’s most iconic: turtle soup. “Turtle was something I didn’t think a lot of people would be willing to get, plus some are endangered,” she says. “So I went to the mock turtle soup in Alice in Wonderland and ended up taking two historical soups, one from New Orleans and one from Philadelphia, and combining and modernizing them into what really tastes like a hot and sour turtle soup, using oxtail.” Usually it takes three or four tries to get the taste of a historical dish right, she says:
“I try the old version, I try a modern one, and I try something in between.”

Carle-Sanders took time off after all the rigorous work that went into Outlander Kitchen and loved hearing from fans who were able to get that much closer to the world of Outlander by making and tasting the foods that fill its pages—or at least Carle-Sanders’s time-mixing, ultra-delectable versions of them. Fans will be thrilled to learn that a follow-up is in the works. While Outlander Kitchen drew from the first six Outlander novels, its sequel will draw from books seven and eight, as well as a number of ancillary short stories and novels by Gabaldon located in the Outlander universe. Perhaps right this minute she’s on that magical island, conjuring enchanted meals that might have fallen through time themselves.

Line an eight-inch or nine-inch pan with wax paper or parchment.

Toss the chocolate with the baking soda and salt. Pour into a heavy saucepan, add the sweetened condensed milk, and melt over medium-low heat, stirring occasionally to start, then more frequently as it melts. When melted and smooth, remove from heat and stir in the lavender, crushing the buds between your fingertips as you drop them into the pan. Stir to combine, then spread evenly in the prepared pan.

Chill in the refrigerator for two hours or until firm. Remove the fudge from the pan, peel off paper, and cut into one-inch squares.

To serve, garnish with additional lavender flowers. Perfect as an afternoon pick-me-up with coffee or tea. Wrap well and store in the fridge for up to one week.

*Note: The better the quality of chocolate you start with, the richer and tastier your finished fudge will be.