Medieval cooking is rife with fragrant, exotic spices, which became more and more accessible during the times of the Crusades and the international trade they ushered in. All those spices conveniently camouflaged unsavory flavors and odors too, which was a boon to medieval kitchens. The three recipes here make abundant use of spices beloved in the Middle Ages—especially cinnamon, which was a status symbol for those European nobles rich enough to snag it from Arab traders. Plus, who doesn’t love cinnamon and clove during the holidays?

Served as a dessert or an afternoon snack, this rich, spice-laden tart is perfect for the holidays. The pureed chickpeas make a nice paste for the filling, adding texture more than flavor, and the rosewater makes it extra fragrant and festive.

In the bowl of a food processor, combine flour and salt. Cut butter in small chunks, add it to the mixture and process until it resembles coarse meal, 8 to 10 seconds.

With machine running, add water in a slow, steady stream. Pulse until dough holds together without being sticky; be careful not to process more than 30 seconds. If it is still crumbly, add more water, a few drops at a time.

Shape dough into a ball, flatten it out to a disk and wrap in plastic. Transfer to the refrigerator and chill at least 45 minutes.

Remove the dough from there frigerator and place on a lightly floured surface. Let it sit for 5 to 10 minutes so that it becomes easier to roll it out. Using about two-thirds of it, roll it out to a circle about ⅛ inch thick.

Place it onto the lightly greased tart pan, pressing gently to fit, then scoop the filling into the tart shell and even it out using a spoon.

Roll out the remaining dough, and using a pastry wheel or sharp knife cut it into 16 to 20 strips. Lay half of the strips across the filling and arrange the other half diagonally across the first ones to form a lattice. Trim edges of all strips to fit into the pan.

Bake the tart for about 45 minutes, then sprinkle the top with additional sugar and drops of rosewater, then finish baking for another 5 to 10 minutes, until the crust is golden brown. Let the tart sit in the pan on a rack for 10 minutes, then remove it and cool completely. 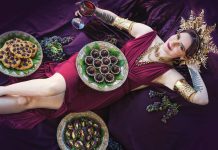 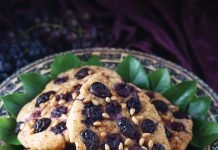 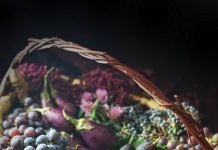 The Decadence of Purple