PHOTOGRAPHY BY SIMON CHAPMAN AND THE AUTHOR

MERMAID MURMURS
Cornwall is bordered by the sea on three sides. You can scarcely get more than twenty miles away from the thrashing waves, precipitous cliffs, and Caribbean blue waters—or from the siren’s song for that matter. With so much ocean, there was bound to be a mermaid tale or two.

After relocating from Whiteford Temple to the Egyptian House on Chapel Street in Penzance, an early 19th century building designed in the style of Egyptomania popularized by Napoleon, we explored the western extremity of the Penwith peninsula. We started with Sennen Cove, as popular with the pirates as it was with the mermaids. It was a siren hangout for centuries where the fishtailed femme fatales frolicked upon the rocks doing mermaid things such as singing, combing their hair, and luring fishermen to their deaths.

The most famous mermaid story in Cornwall happened in the village of Zennor. In the Norman church of St. Senara, a beautiful and mysterious stranger known as Morveren would come in the evening to the church to listen to the angelic voiced churchwarden’s son, Mathey Trewella. One night Mathey sang particularly beautifully and heard the stranger in the back row gasp and let out a soft sigh. Mathey’s eyes met hers. He saw that her hair was wet and shining. While their eyes were locked, he had fallen in love with her. Morveren’s limpid eyes flashed with fear and she slipped from her pew into the twilight. Mathay pursued her toward the ocean, but she became tangled in her dress and tripped, revealing a fish’s tail. “I must go. I am a creature of the sea,” the beautiful Morveren said, “and have to return to where I belong.” Mathay was lost to love and replied,

“Then I will go with ye. For with ye is where I belong.” Mathay lifted the mermaid from the ground and jumped into the ocean. They were never to be seen again. However, on calm fair days his voice can be heard soft and high, but on days that would turn stormy, he sings in low deep tones. It became so that the Zennor fishermen knew when to keep their ships at anchor in the harbor and when it was safe to sail out.

To commemorate the mermaid’s visit to the church, in the 15th century a pew was decorated with a carved mermaid holding a mirror and comb. Some say it is the same pew that Morveren sat in when she listened to Mathay. The pew can still be seen in the church today. Before returning to Penzance, we had a sunset dinner nearby on the terrace of the Tinner’s Arms, a pub where D.H. Lawrence, the English author of The Rainbow (1915), stayed for two weeks before moving into a cottage nearby. 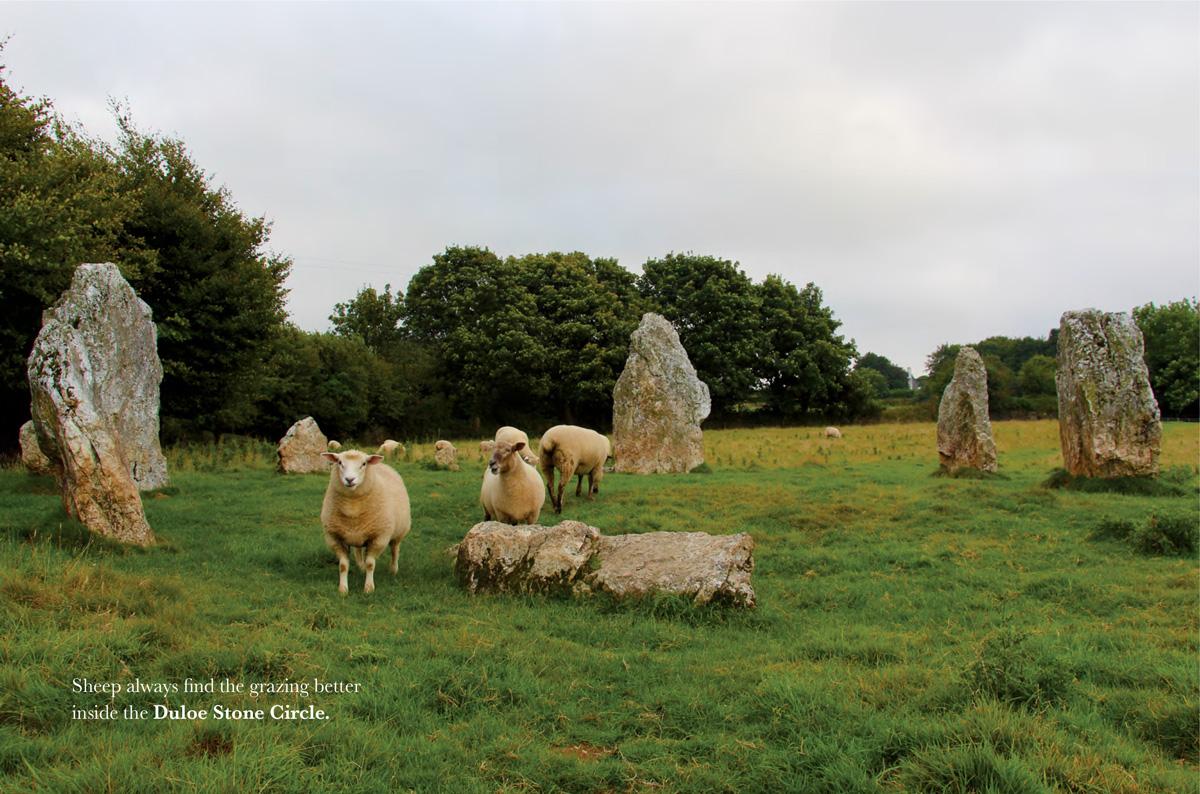 ROCK STARS
Cornwall is freckled with Neolithic and Bronze Age dolmens and standing stones. Those ancient burial and religious sites composed of megaliths and flat capstones remind one of Stonehenges in miniature. Piskies and guardian fairies are said to dwell among and watch over these ancient stones. Not far from St. Nun’s Well, we found the stone circle of Duloe: eight quartz-rich

rocks standing tall in a sheep field. It’s renowned for its small diameter (less than forty feet) and large stones (up to eight and a half feet high). In the 18th century, during the winter of an especially long hard frost, a poor farmer ventured out to the stone circle and prayed to the piskies of Duloe to help feed his starving family. The next morning a feast large enough to  feed the town was laid before his door. The farmer returned that night to thank the piskies and ask what he could do in return. When finally a pisky showed up, the farmer was horrified to see it trembling and dressed in scanty rags, huddling by his lantern for warmth. The pisky was not allowed to ask the human for help. The farmer ran to fetch a blanket for the shivering sprite, but when he returned, the pisky was gone. All the next day the farmer had his family toil to make a grand plush outfit for the freezing fairy. They left it at the stone circle for the pisky, who eventually snatched it up, thanking the farmer for answering his prayer.

Just beyond the Madron Well stands a Neolithic tomb known as Lanyon Quoit. It resembles a large three-legged table and is said to have housed the bones of a giant. Another legend claims that it was the place where King Arthur had his last meal before the battle of Camlann. The large quantity of cow pies we had to tip-toe around somehow diminished the dignity of this landmark.

Mên-an-Tol is a group of relatively small stones around 3,500 years old. The center stone resembles a large granite doughnut. Indeed, Mên-an-Tol means “hole stone” in Cornish. There is a myth that its pisky guardians help heal those that pass through the center of this stone. In one story they helped a mother become reunited with her real child when she passed a changeling through the hole. It was also believed that women passing through the stone would increase their fertility to the point that barren women would conceive. It was also believed to cure back problems (for this reason it was also dubbed the Crick Stone), rickets, and tuberculosis and said to break evil spells and be a charm against witchcraft. Just as a preventative, I crawled through the stone myself. So far, it seems to be working 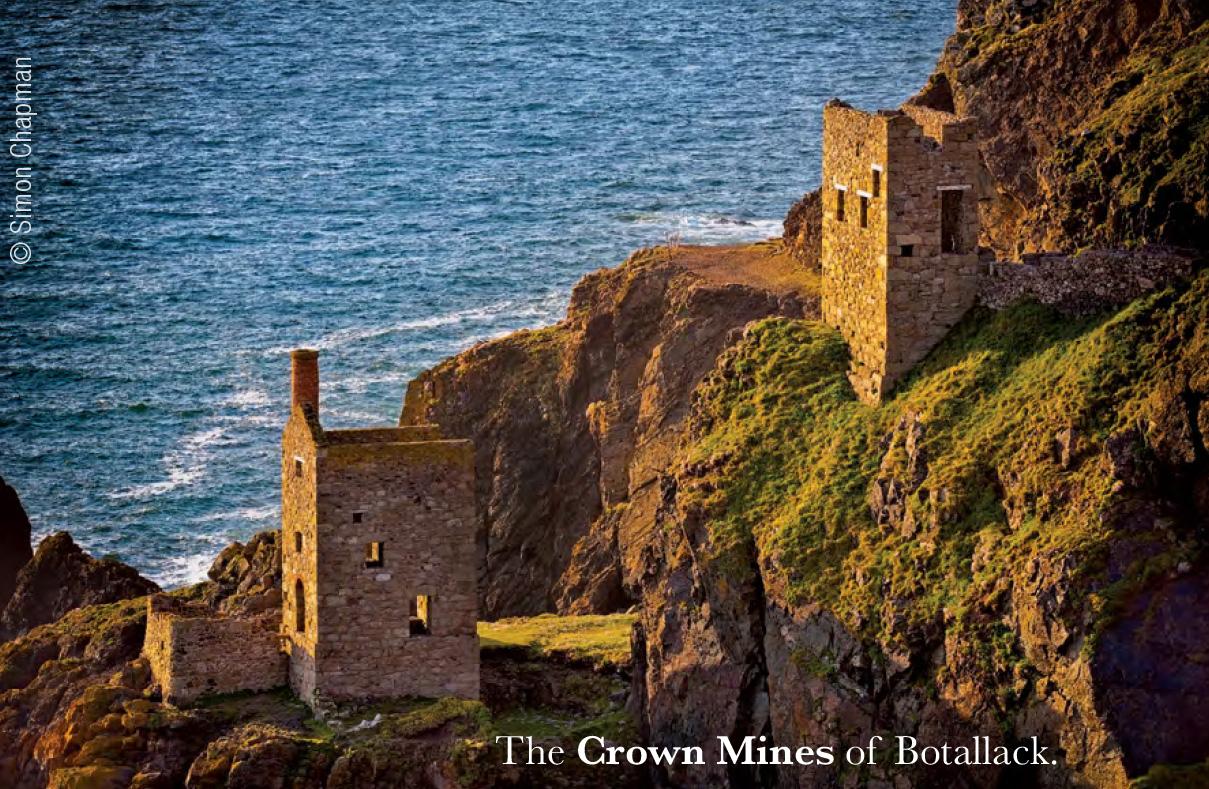 MINE READERS
Cornwall is mining country, or rather it was mining country until the copper faded in the 1840s and tin peaked in the 1870s. Abandoned mines litter the landscape. We saw them on the horizon, along the roadside and dotting distant cliffs. They are the scabs covering the wounds left by 18th and 19th century capitalist  industrialism. Yet even so, there were fairies called Buccas or Knockers that populated the mines. These piskies were reported to be between eighteen and twenty-four inches tall and lived deep down in the remotest areas of the tunnels. Most believed they were benevolent sprites that would “knock” upon the walls of the mines to direct miners respectful of them to rich veins of ore. The Knockers were also said to warn miners of tunnel collapses and other dangers by knocking in advance of these disasters. To secure the Knockers’ favors, miners would toss the last bite of their meals down the shaft as tribute to the fairies before they surfaced. Many Cornish miners wouldn’t work a mine at home or abroad unless they were convinced that Knockers had already taken up residency within its shafts and tunnels.

A FAIRY FUNERAL
On our way toward Carbis Bay on the north coast of Penwith, we stopped off at a church in Lelant that dates back to the 11th century. We wanted to visit because we heard the area around the St. Uny church was favored by the fairies for their midnight revelries. Unfortunately, most of the sandy surroundings have been transformed into a golf course. But putting greens and driving ranges were a long way off when, centuries ago, a man walking home well past midnight heard the bell of the church toll and saw candlelight flickering through the windows.Curiosity drew him to the granite church so that he could peer inside. He could scarcely believe the proceedings that were unfolding. A funeral procession was making its way slowly down the aisle toward the altar. The corpse was a beautiful woman covered with white flowers, her flaxen hair coiled about the blossoms. Yet the most difficult thing for the man to comprehend was the tiny stature of the participants; they were smaller than a child’s doll. He watched as a group of tiny men opened the floor near the altar. They laid the blossom-laden corpse down into the grave and began wailing that their queen was dead. The man spontaneously cried out himself. Instantly the candles were snuffed and a strong wind was whipped up outside. The man felt himself pricked and pinched in the moonlight as the shrieking fairies flew past him. 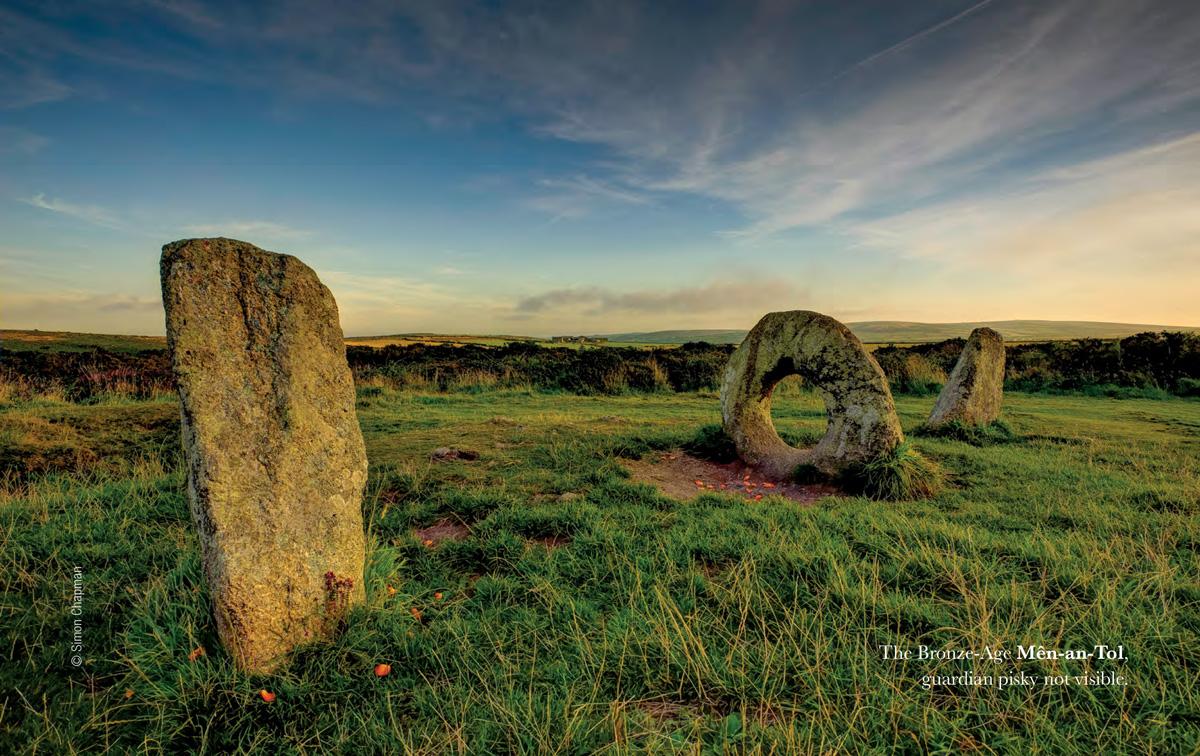 Fairies travel in the most magical ways. They can fly or they can just appear. On the southeastern coast of Cornwall, a farm boy was heading back home at twilight when he heard someone cry, “I’m for Porthallow Green!” The lad repeated these words and found himself directly on the green in the company of laughing piskies. They then cried out, “I’m for Seaton Beach!” and vanished. The boy repeated these words and immediately found himself upon the shore with the dancing piskies. Then one of the elfin creatures shouted, “I’m for the King of France’s

cellar!” In a heartbeat, the group was in Louis’s wine cellar, where the boy lifted a silver goblet and tucked it beneath his shirt as proof should anyone doubt his story. Eventually he returned home using the same pisky method that brought him there. If only we could say, “We’re for New York,” and find ourselves back home, having avoided the return flight and the security and customs lines, our fairy trail would have ended as enchantingly as it had begun.