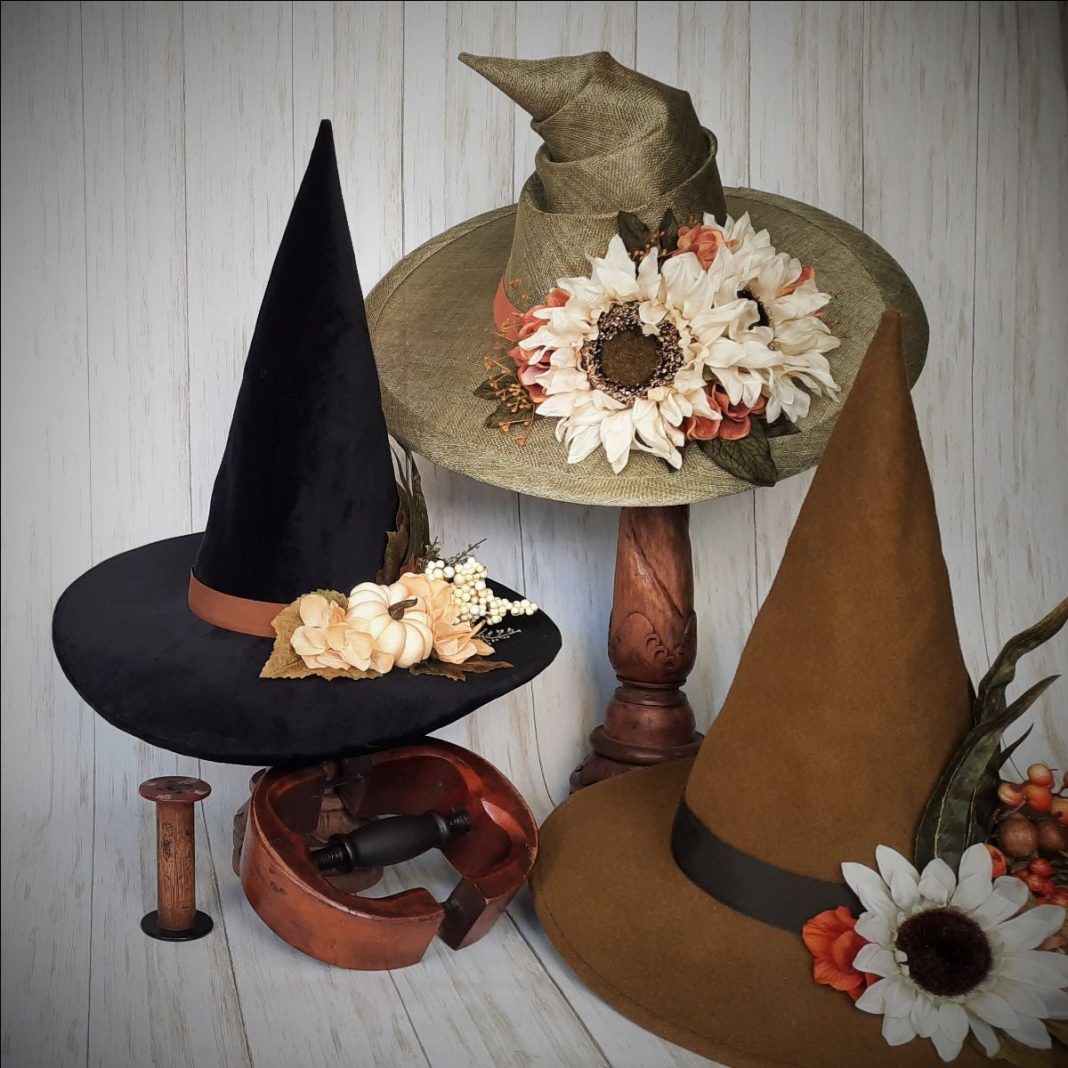 You might have noticed this call out to Evercrumbly & Witch in our new autumn issue:

Not to mention remember this feature on witch hats from our autumn 2018 Practical Magic issue, which included one of Evercrumbly & Witch‘s creations (bottom right) (the print version of this issue is sold out, but you can still download it for free at https://enchantedlivingmagazine.com/a-gift-for-our-readers/):

Isn’t that equal parts elegant and magical? Here are some more of this pair’s stunning hats: 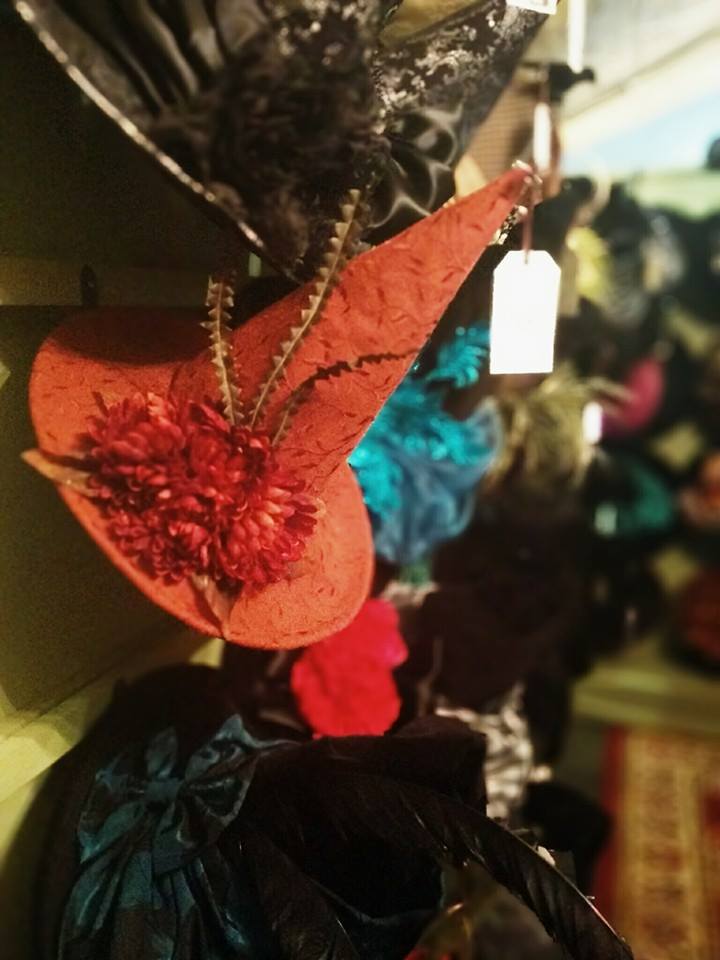 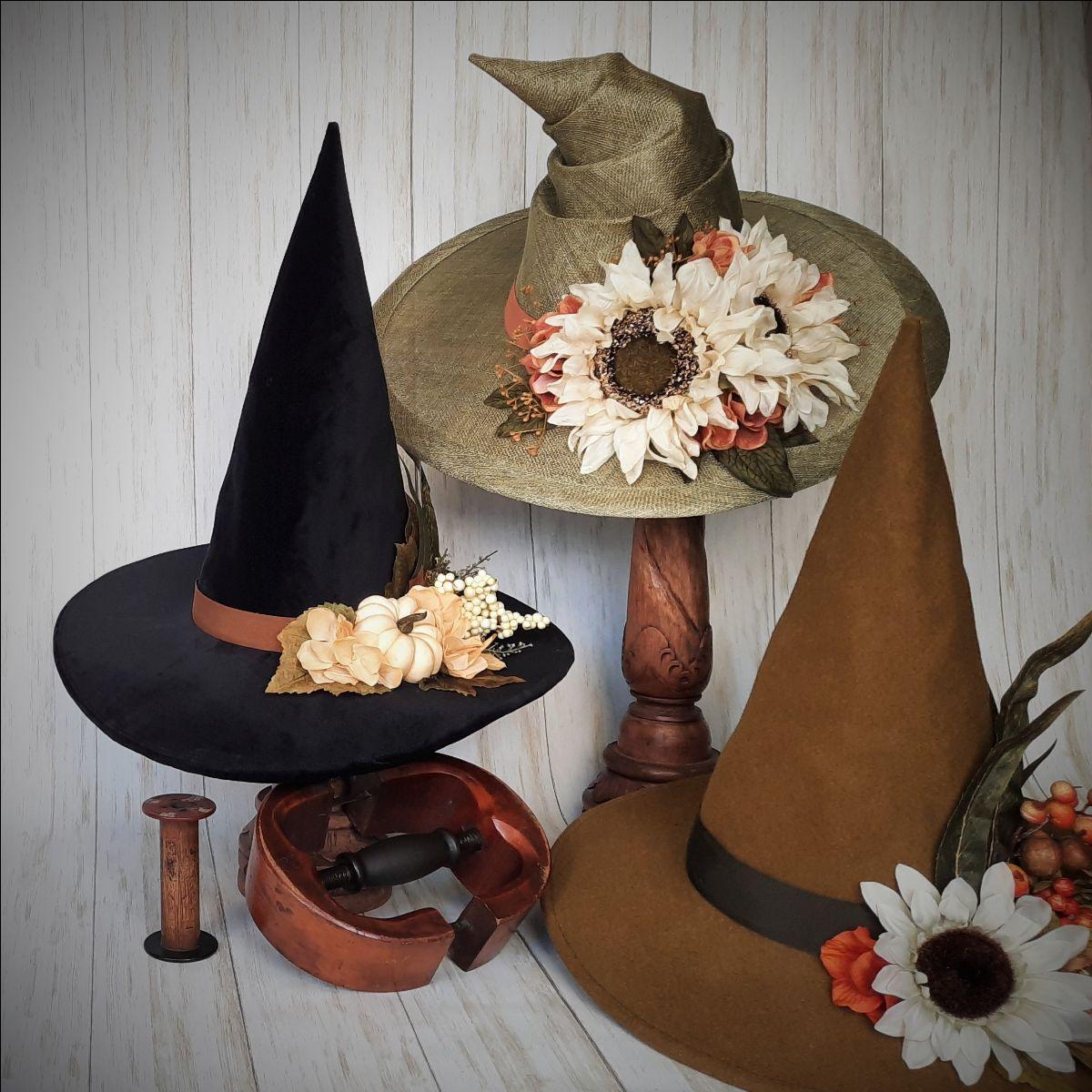 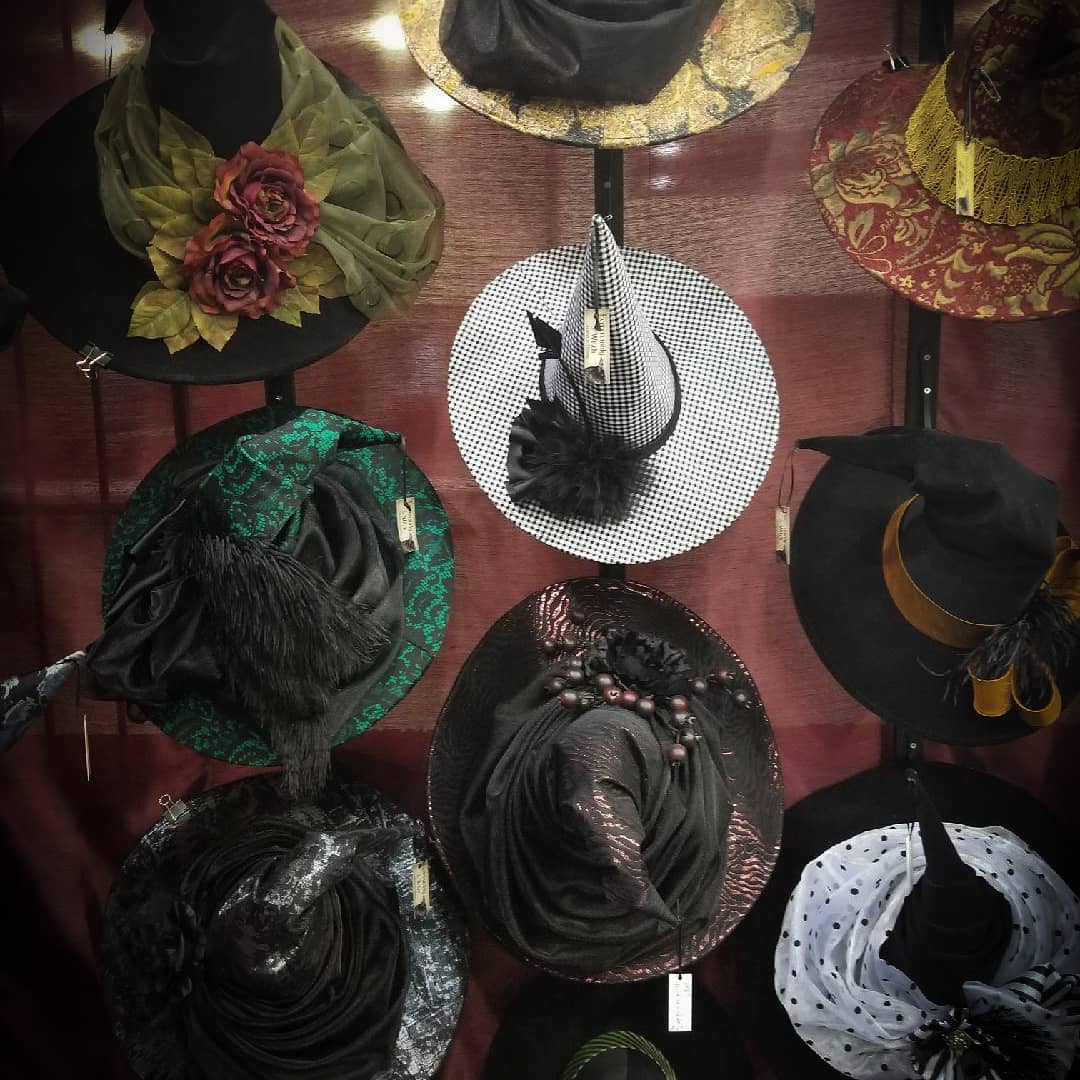 And check out their overflowing studio:

And the glamorous milliners behind the brand, Jamie and Frederick Addington who spend many hours conjuring these fashionable chapeaus: 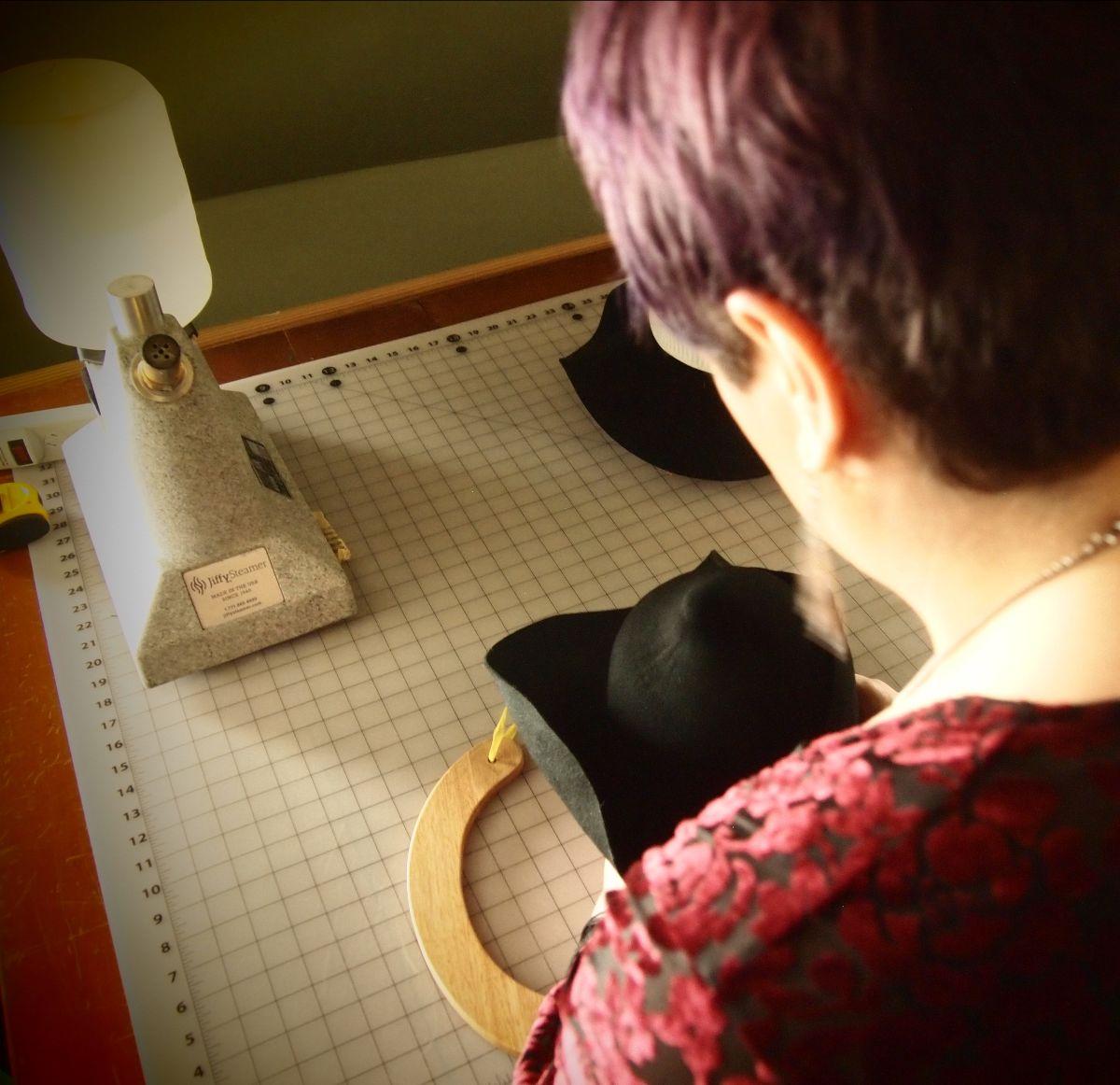 Don’t you maybe need one or two or five of their hats? Because we do.

Below, we ask Jamie a few questions about life as an otherworldly milliner:

So why witch hats? How did you come to make them and what is so appealing about them?
That’s funny, I get asked this a lot. It was actually an accident, well kind of…. Before doing this, I owned a small costume company that specialized mainly in period garments and gowns. I became sick of it very quickly, and started to hate my job. A coordinator for an event I used to attend (also a dear friend) knew I was getting sick of being stuck inside the “period box” and wanted an outlet for my pent up creativity. They were going to be hosting a really amazing Halloween festival, and she suggested I make some things and sell them to “clear the cobwebs” and express myself. So I did. I actually made some really fantastic witch gowns with Victorian elements and some lovely details, but of course, if you are a witch, you need a hat! So I made a hand full of really wild hats to go with them, and they were a hit! They flew (no pun intended) out the door faster than I could make them, and I fell in love with them! Now, looking back, I don’t think of it much as an accident, so much as the universe pushing me in the right direction.

I find the witch hat particularly appealing for a lot of reasons. I have always been obsessed with fantasy and magic, but also I feel like witch hats symbolize something more than that. The shape is very powerful. The lore surrounding the witch hat is varied, but one of the theories of where the modern witch hat came from is from the 1600’s Puritans hat. A very similar shape. They believed that one of the ways that you could tell a witch was if a woman put on her husband’s hat. So, in a way, I feel like it symbolizes all the women (and some men too!) throughout history who were persecuted for being strange or unusual. I like to think that every time a person today wears a witch hat, they honor those people who suffered for us to be able to wear it proudly without fear.

What does “witch” mean to you? Would you use this word to describe yourselves?
Yes! We would use it to describe ourselves. Both my husband and myself identify as witches. Fred comes from a Wiccan and Asatru background, and I am a little bit of everything. We make sure we cleanse our studio spaces regularly, and come to work with clear, calm energy so that if other practitioners would like to use our hats in their ritual work, they can without concern.

To us the word witch is to describe someone who uses their energy to create! I think that’s what makes art beautiful, when you can feel the love and energy put into a piece by the creator, so in a way, all true artists are witches too!!!

Do you make other kinds of hats?
Yes! After I gave up my costume company, I spent years learning the skills I needed to pursue my newfound passion. I wanted to make sure if I was going to do it, I wanted to do it right! So I took classes and learned from some amazing milliners, and continue to learn! And in that process, I learned how to make many kinds of hats. We are expanding all the time! We already offer several non-witch styles including our very popular Gambler, Cloche hats, Boleros, Fedoras,  Sinamay straw hats (both in mundane and Witch styles), Derby hats, fascinators and pillboxes. We are hoping to include braided hats soon as well!

Do you have a favorite or most special hat you’ve made?
They are all very special to us, but there are some that stick with me. There was one about seven years ago that had strange leaves with glitter stuff on them…. sounds gross, but it was a really cool hat when finished!

Have you had any especially interesting requests or challenges?
YES! We get some very interesting requests! Most recently we were requested to create a “gross” hat for “Borah” of the Salem Black Hat Society, with a rats nest IN the hat, spilling out with bones, burn holes, and venus fly traps. The structure inside allowed the hat to be cut open and splayed so the rats appeared to be coming out. It was a challenge, but the end result was worth it!

In your everyday life, how do you stay enchanted?
This year has made that task even harder, but through this challenging time we have realized how important self care is. Taking a moment every now and again to smell the air and feel the wind is important!