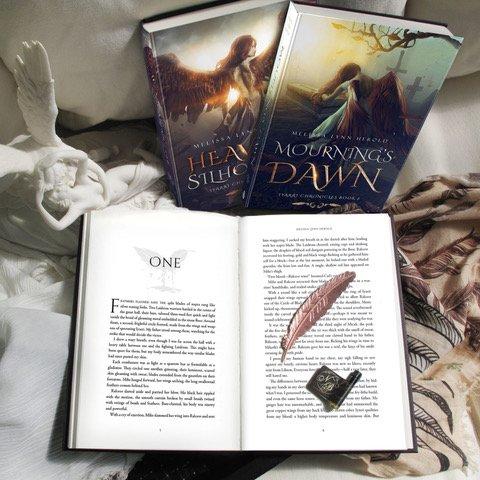 We first introduced you to Melissa Herold, fantasy author and herbal alchemist, with her debut fantasy novel Heaven’s Silhouette: Iyarri Chronicles Book 1,  and more recently talked to her again about Victorian-Era Auburn Hair. As the colors of summer shift to autumn, Melissa is ready to unveil her most recent book, Mourning’s Dawn: Iyarri Chronicles Book 2. Just look at this gorgeous cover:

It just came out this week and you can find it in both hardcover and ebook on Amazon, Apple books, Kobo and more.

Though if you order directly from Melissa’s etsy shop NightBlooming or her Patreon, you’ll also get some exclusive gifts including a metal feather bookmark and an essential oil blend inspired by one of the characters. You can even take 15% off your order at NightBlooming with the code Enchanted15 through the end of October!

Two thousand years ago, on the Night of Bloody Feathers, humans used blades, bows, and fire to bring a violent end to their delicate partnership with the winged, mythical Iyarri, and in the same stroke, destroyed the balance of truth and justice that unified their enemy. Splintered, the Iyarri withdrew from the world of men, and with time and magic to hide them, faded into human mythos and religious iconography. But they did not forget, and in deep in cliffside strongholds, the Iyarri amended their laws: contact with humans became forbidden, and having a child with one, the Unspeakable Sin, was punishable by death.

Now, one such forbidden child, Aurelia, learns the true circumstances of her birth and must evade a death-sentence handed down a millennia ago.  It’s up to her to harness her unique blood and long-unseen powers to not only carve out a place for herself in Iyarri society, but also to mend what was broken so long ago.

You can watch the book trailer and even read the first chapter right away.

We caught up with Melissa to ask her some questions as this next installment of The Iyarri Chronicles takes flight.

We know from Heaven’s Silhouette that Aurelia is a character that exists in the gray spaces of her world. Does that change in Mourning’s Dawn?
Aurelia is a character that exists in these in-between places, literally as a living, breathing punishment for her father. The Iyarri hate her for what she is almost as much as they hate her for what she isn’t. In Heaven’s Silhouette she was nearly literally torn in half and put back together, and in Mourning’s Dawn she’s shattered by heartbreak, but that’s what unlocks these powers that haven’t been seen for thousands of years and allows her to shine.

Do you have more books planned for the series?
I do! The third book in The Iyarri Chronicles will be out next fall, and I’m already deep in the drafting process. For those readers who are antsy about years-long delays in between books, I have a progress tracker that shows where I’m at in the process for each book—you can follow where I am at any point in the process. I’ve also planned a prequel and bonus content for my Patrons on Patreon, like an illustrated guide to the Iyarri.

You created a language for your Iyarri called Loagæth that’s based on the language of angels. Can you tell us more about it?
Loagæth is based on a purported angelic language called Enochian. I don’t want to give spoilers, but there are several places in the books where we start to understand in-world that Loagæth is the language of the Iyarri, but that pieces of it were learned by humans, and humans, thinking the Iyarri to be angels, turned this incomplete and erroneous translation into what Dee and Kelley named Enochian. I have a few books on Enochian and the decision to twist it into Loagæth came, in part, from the fact that Enochian is consonant word salad and VERY unintuitive to pronounce. What I kept was the essence of these things–Loagæth is a language full of syllables which lends to it sounding musical to human ears, but forging the more pronounceable aspects of Enochian into its own language.
Some words I got to keep wholesale.

Othe Loagæth words were created by paring back some of the more garbled Enochian to something that wasn’t a train wreck on the page, or by paring together pieces of Enochian words.

That’s the really short version, but I’ve got an entire post for those that would love more detail about how I created this fantasy language.

You’ve created something you call Novel Blends. Can you tell us more about those?
One of the key reasons I decided to publish The Iyarri Chronicles independently was so that I maintained ownership to each and every one of my creative rights, and with those rights, could extend my writing into my other artistic pursuits–one of those being creating Novel Blends, which are essential oil blends inspired by my world and characters. It’s something my readers LOVE because, as one of them said, “The connection of the oils to the book makes it all the more special: “Yes, this is what Aamon’s wings smell like. I don’t have to imagine, I have it in my hands.”

These essential oil blends can be used in diffusers to fill the room with a variety of alluring scents, or come pre-diluted in oils suitable for skin, hair and beards, or as misters to spray on just about anything!  I create and hand-blend each oil myself, using only the highest quality carrier oils and essential oils–no synthetic fragrance oils–each ingredient is something you could actually find in an Iyarri stronghold.

Between writing The Iyarri Chronicles and your herbal enchantments at NightBlooming you must be busy! How can people support your creative works and see more of what you do?
The center of my little universe is my Patreon, where fans of both NightBlooming and The Iyarri Chronicles get to enjoy all sorts of behind-the-scenes photos, articles, and get Patron gifts in exchange for their support. No matter what I’m doing, my Patrons know it first.

And finally, how do you stay enchanted?
I’ve said before that I always try to find the magic in the mundane, but one of my favorite ways to think of new ideas for my creative works is to add one of my Novel Blends to a steaming bath, then just close my eyes and daydream. I get some of my very best ideas this way!