“My country straddles an interesting line,” says Syrena, Singapore’s first professional mermaid and founder of the Singapore Mermaid School. “We’ve been very much Westernized for years now, but we’re of course also an Asian country. So there’s this balance of liberalism and conservatism that plays out very interestingly in the ways that subcultures and interests grow and evolve.” When Syrena first started out as a professional mermaid five years ago, nobody in Singapore had ever heard of such a thing and she was greeted with a fair amount of incredulity. “People were naturally concerned that I wouldn’t be able to make anything of myself,” she says.

In the past few years, though, things have changed. Syrena founded the Singapore Mermaid School in 2015, and now there’s the Singapore Mermaid Pod: a community of like-minded mermaids who love all things fantastical and all things oceanic. The group is about fifty strong, not including the child Mermies (ages four to fifteen) and the Honorary Mermaids, who travel into Singapore for a day or two to take an express course with the pod. It’s a young movement but a burgeoning one. “I see a lot more people taking an interest in mermaiding now,” Syrena says. “I’m also happy to report that I’m no longer greeted with the same incredulity when people ask about my work. Now people’s eyes light up and they say, ‘I saw you performing at that party!’”

To Syrena, the essence of being a mermaid is having a mind open to whimsy, fantasy, and magic— “a feyness of spirit, a grace in carriage, an openness in the soul.” Her own initiation started from a very young age, when she immersed herself in tales of myth and legend. “I think we all become something greater, take on some sort of enchanted mantle, when we open our eyes to the magic that surrounds us in this amazing world,” she says.

While mermaids aren’t traditional mythic figures in Singapore, the country’s national symbol, the Merlion, is an iconic, chimera-type figure that spouts water over the skyline and is half-lion, half-fish. The aspect of the lion was derived in part from a tale of Sang Nila Utama, a prince who discovered Singapore and encountered a lion on his adventure—compelling him to name the island Singapura, or Lion City. The aspect of the fish might stem from the country’s origins as a small seaport, bustling with kampongs and fishing communities.

“I identified as a mermaid when I was four, I identify as one now, and I’ll identify as one when I’m a ninety-year-old woman with silver hair and fantastic tales to tell!”

In China, the homeland of Syrena’s ancestors, there is the jiāorén, or the Chinese take on mermaids. Legend has it that these sirens dwelled in the South Sea, and when they would weep, their tears would manifest as glimmering pearls. “I think there’s something beautifully tragic about them,” Syrena says, “a message about how even suffering and sadness can perhaps give way to something precious, rare, and lovely.”

At the Singapore Mermaid School, students learn about this mermaid lore—and its lessons—while becoming mermaids themselves. When the students learn about selkies, for example, they learn how the most important part of a selkie is her sealskin. As Syrena explains, “Unfortunately, the human men who fall in love with selkies very often end up stealing their sealskins so that they must remain on land as their wives. Without her sealskin, the selkie can no longer return to the ocean and becomes a passive, docile, submissive housewife. If and when a selkie does eventually find her sealskin, though, no matter how happy she is with her human family, she inevitably heeds the call of the wild ocean and returns to the sea. Similarly, I think all of us have vital parts of our personality that are often stolen away from us or that we are told to repress.”

Unique in its combination of fantasy and fitness, the school is open to both kids and adults. And of course, its bread and butter is teaching humans to be mermaids.

There are currently three levels: Bronze, Silver, and Gold. The level system ensures a safe, steady, progressive standard of learning: Students build strong foundations at the Bronze level and then, as they advance, learn mermaid techniques, strokes, and combinations of increasing intensity and challenge. Each level has its own theoretical and physical focus.

The school is also launching a new mermaid class, Platinum: Aquarium, which will be the first of its kind anywhere in the world. Mermaids who have graduated the Gold level will get the chance to swim and learn in an aquarium-like setting: a beautiful four-meter pool with a glass wall that overlooks the Fish Pool oyster bar (where a signature Syrena’s Song cocktail is now available—if you’re in Singapore, go try it!).

“People really come into themselves when they join this community,” Syrena says. “You see them realize and embrace this graceful, elegant, powerful version of themselves, and it’s such a joy to see. I think the confidence they acquire from being in the water as this amazing mythological creature permeates into other aspects of their daily living.” Tied with that, she says, is how lifelong friendships are forged in the Singapore Mermaid Pod. The group is really a family that each member has chosen to be part of. “I’ve never met two mermaids from my pod who don’t get along. We’re all here for each other, open with our support and ready with our advice, and it’s amazing. I feel so blessed to be able to journey with these incredible people.”

Why mermaids? “I mean, who doesn’t love mermaids?” she asks. “On a purely superficial level, they’re gorgeous, alluring, and have amazing hair. On a more symbolic level, mermaids are so protean and they’re constantly straddling two different concepts: the human world versus the oceanic world, the world of reality versus the world of fantasy, the ability to be vulnerable and pretty while being devastatingly powerful, the power to heal and restore, as per Hans Christian Andersen’s The Little Mermaid, along with the simultaneous power to destroy, à la countless fearful sailors’ accounts. Mermaids take these seemingly polarized elements and blend them together cohesively, comprehensively, in their very existence. That’s deeply compelling.”

Does she have any advice for aspiring mermaids? “Don’t be afraid to be who you are. You don’t have to follow a mold of what you think a mermaid should be. Pay close attention to the things, people, and causes that make your soul feel fulfilled at the end of the day and follow those paths. Your voice will be strongest when it is truest.” 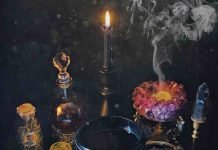 Spirit Communication Through The Art of Divination 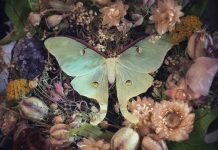 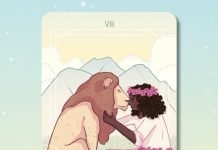