Home Writing The Eccentricities of Gentlemen The Elegance of Bloodletting 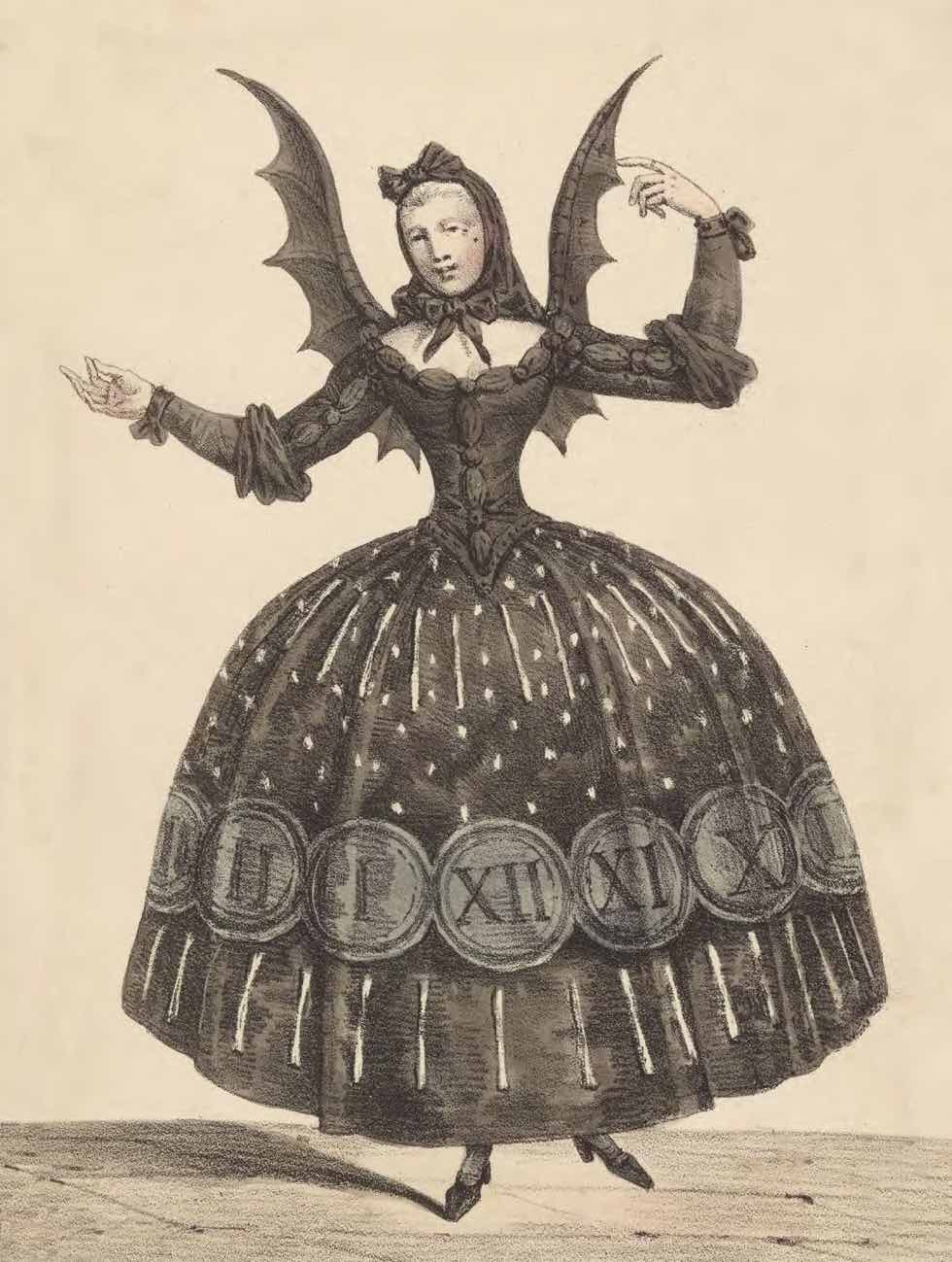 Vogue, a century or so ago, often featured the “fancy dress balls” of the day, especially as they pertained to charity events and the idling of the rich—the magazine proclaimed such costume parties (in the 1913 article “On With the Masque!”) to be a “whirling vortex of  merriment in  the guise of bird, beast, or flower, or as the elements of nature, or in plumes borrowed from many nations.”

If you chose not to draw on cultural stereotypes, there was always the glorious, satiny bat. In a 1910 Vogue guide to costumes for fancy-dress dances, readers are advised to avoid “the gaudy and tinseled models.” Instead, it steered readers toward “the bat” among its other recommendations of “Venetian fruit seller” and “Italian peasant.” Foremost: “For brilliant effects, when necessary, there is available a glazed tarlatan … It is originally intended for wrapping furniture and bric-a-brac when the house is shrouded for the summer.”

Such celebration of the bat’s style coincided with the grimmer reports of the time of the actual beast’s less debonair qualities, from its bloodsucking on sleeping victims to its anti-dapper swagger. The Bronx Zoo was the first to exhibit vampire bats in captivity, in 1933; the New York Times quoted the zoo’s curator of mammals and reptiles upon the bat’s Dracula-like arrival to the city: “It used the wings as stilts, more or less, and in walking looks like a giant spider.”

Jean Painlevé, who was described in his New York Times obit as “a biologist, fetishist, filmmaker, and aquanaut” filmed a vampire bat in 1939. When the short was released in 1945, “The Vampire” became a clear allusion to the Nazis. The Times describes the film as featuring a bat that “gives a guinea pig a gentle kiss on the lips, which, as the subtitles explain, numbs the victim in the place where the bloodletting will occur …”

A few reports from the 1870s noted the vampire bat’s inclination toward toe sucking.

“Many tales have been told of the Vampire Bat,” writes the Reverend J.G. Wood, in Wood’s Animal Kingdom of 1870, “and its fearful attacks on sleeping men—tales which, although founded on fact, were so sadly exaggerated as to cause a reaction in the opposite direction. It is reported to come silently by night, and to search for the exposed toes of a sound sleeper—its instinct telling it whether the intended victim were thoroughly buried in sleep. Poising itself above the feet of its prey, and fanning them with its extended wings, it produced a cool atmosphere, which, in those hot climates, aided in soothing the slumberer into a still deeper repose. The Bat then applied its needle-pointed teeth to the upturned foot, and inserted them into the tip of the toe with such adroit dexterity, that no pain was caused by the tiny wound. The lips were then brought into action, and the blood was sucked until the Bat was satiated. It then disgorged the food it had just taken, and began afresh, continuing its alternate feeding and disgorging, until the victim perished from sheer loss of blood.”

This account seemed to be directly referenced, and dismissed, in The Columbian Cyclopedia of 1897: “Vampire-bats sometimes attack men, when sleeping in the open air; but the stories of their fanning their victims with their wings, while they suck their blood, are fabulous.”

The Delineator, the turn-of-the-century fashion magazine, featured the fancy-dress bat costume in the article “Carnival and Masquerade Costumes”: “The mantle is of black satin, made double and whaleboned to represent large wings cut something like an umbrella top. The arms should be gracefully raised at frequent intervals to suggest this winged creature in flight.”

Meanwhile, an 1898 article in The Puritan on “Novelties in Fancy Dress” describes the bat costume as “a very ingenious and artistic affair” with black taffeta silk for wings, and ribs of featherbone. “These wings are attached to the long black gloves and are fastened over the shoulders in fichu fashion, meeting over the bust in front and finished by a small entire bat. The decoration for the head is a large bat’s head and small bats decorate the slippers.”

But film scholar Diane Negra suggests, perhaps, that the bat’s arrival at the fancy-dress balls signaled that the party was over. She notes that “in the early decades of the century, makeup was integrally tied to a cultural sense that the boundaries of class were collapsing, and the vamp iconography of pale skin and heavily made-up lips and eyes might well have connoted transformative desire to audiences at the time.”

But it wasn’t Musidora in the literally bat-like getup of  the film. In Les Vampires, a ballerina (played by Marfa Koutiloff) dies on stage in the fancy-dress wings of a vampire bat, mid-performance, her finger having been pricked in her dressing room by a poisonous ring. (This truly is in the spirit of the vampire bat’s modus operandi of counting on the digits for sustenance: “They do not seem inclined to attack large animals, and never man,” wrote Augustus C.L. Arnold in 1875, “only while he is sleeping, when they inflict a small wound in the great toe, without awakening him, and suck the blood in such a way, that when the bat withdraws, the wound remains open, and still continues to bleed.”)

Certainly among the most stylishly repulsive vamps in history are “the Vudkodlaks of the Servians” as described under the heading “vampire” in Alden’s Manifold Cyclopedia of Knowledge and Language in 1892. They were “particularly fond of the blood of young girls. They pair with the Wjeschtitza, female ghosts with wings of  fire, which by night sink  down on the breast of sleeping soldiers, and inspire them with their fury. As anyone killed by a vampire becomes himself a vampire, when a Wallachian dies, where this superstition prevails, a skilled person, generally a midwife, is always called in, to take precautions against the corpse becoming a vampire, by driving a nail through the skull, rubbing in various places the lard of a pig killed on St. Ignatius’s Day.”