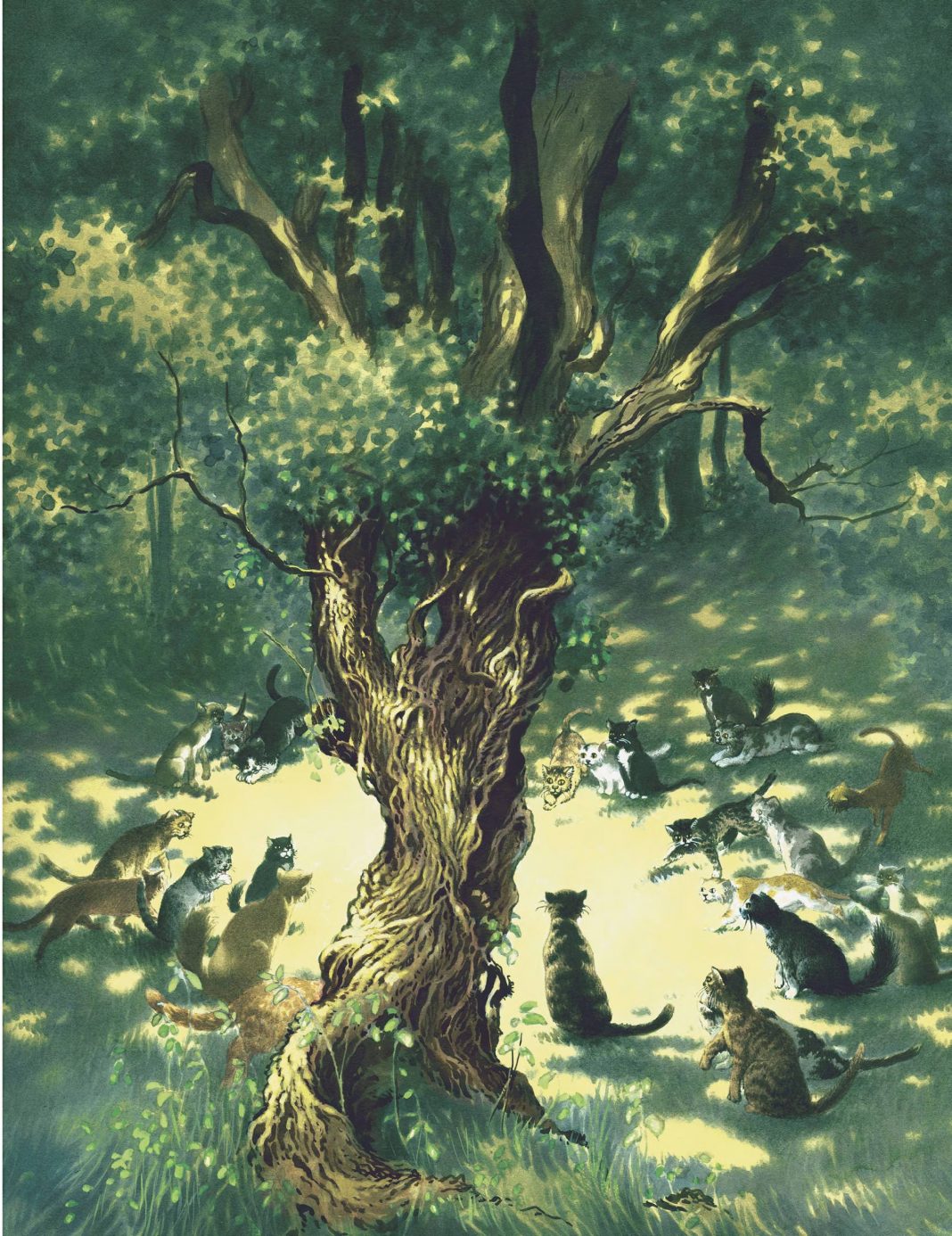 BY SARA CLETO AND BRITTANY WARMAN

Cover Art: Here in the Grove ART BY CHARLES VESS

If you’ve ever spent any time with a cat—black, brown, tabby, white, calico, gray, orange, or otherwise—you know that, despite appearances, they are no ordinary domesticated pet. They are, rather, the exceptionally rare kind of magical beast who might deign to eat a treat or two from your outstretched hand and nuzzle in for a skritch on the top of their head but always remain a little fey. The connections between magic and cats, and the idea that cats are never exactly what they seem, are long established. The cat was worshiped in ancient Egypt, feared as an agent of the devil in early Europe, and associated with a huge variety of folk beliefs, folk magics, and folktales. Perhaps the most famous folk association we have with the cat in the West is that of the witch’s familiar, a creature who helps a witch with her magic potions, catches rides on her broomstick, and even sometimes allows her to take over his body in order to wreak particular mischief. But there is also the enormous Cat Sith of Celtic folklore, the fairy-like Norwegian forest cats of the goddess Freya, and the monstrous Yule Cat of Iceland. Some folk beliefs suggest that cats can see planes of existence we humans cannot, and that when you see a cat seemingly staring at nothing … well, let’s just say it might not be nothing.

Fairy tales provide a natural habitat for cats. In these stories, cats can be kind helpers, dastardly tricksters, or even both in the exact same tale! Here are a few of our very favorite fairy tales featuring wondrous and magical cats.

“Puss in Boots” (France) –
While this story is actually much older than Charles Perrault’s version, his is by far the most famous tale of the cat who helps his (or sometimes her) owner achieve wealth, glory, and a princess to boot. Puss is clever, resourceful, and determined to prove his worth in the world. The fact that he can talk, of course, makes him more than a bit magical!

“The White Cat” (France) –
In this tale, by Madame D’Aulnoy, a princess is enchanted into the form of a beautiful white cat. As a cat, she rules over her feline subjects, even coordinating magnificent battles and engaging in delightfully witty banter. She skillfully wields her own magic: She effortlessly produces the impossible items her prince needs for his quests and places them inside tiny nut shells. Not all sweetness, however, she can also scratch the prince at a distance as a way of reminding him to remember and believe in her!

“The King of the Cats” (England) –
In this charming tale from England, a man happens upon a glorious cat funeral. One of the cats participating comes forward and tells him, quite insistently, to tell someone with a strange name (sometimes Tom Tildrum) that someone with an equally strange name (sometimes Tim Toldrum) has died. The man is bewildered and recounts the tale to his wife when he gets home. Their own housecat suddenly jumps up and exclaims, “Then I am the king of the cats!” and rushes up the chimney never to be seen again. Clearly this family didn’t realize that they were housing royalty!

“Kisa the Cat” (Iceland) –
In this lovely tale from Iceland, a queen’s beloved cat helps her gain a child of her own. Soon after the princess is born, however, the cat and her kitten vanish. Many years later, Kisa, a beautiful cat, appears and tells the princess that she is her sister. The princess is frightened at first, and her handmaidens scare Kisa away, but her mother realizes that she must be the small kitten who vanished. The princess goes out into the woods to find Kisa again, only to be kidnapped by a giant! Kisa is able to rescue her, and she requests her only reward be that, when the princess is married, she may sleep at the foot of the bed. The morning after the princess’s marriage, Kisa transforms into a beautiful girl. Both she and her mother had been enchanted to be cats until they could find and do a kind deed that had never been done before—which is obviously difficult, but nothing is quite impossible for cats!

“Two Kind Cats” (Italy) –
In this Italian tale, a merchant sails to a land where everything has been destroyed by mice. The king of this land wishes to trade with the merchant but has nothing left. The merchant, who is a very kind man, goes to his ship and brings back his two beloved cats, Baccio and Bianca. When he lets them go, they quickly take care of the mouse problem, and the king is so grateful that he showers gifts upon the merchant. When the merchant gets back home, a rival merchant is jealous and wants the same gifts for himself. When he arrives in the distant land, he offers beautiful silks and the king thinks he has nothing to equal them. One of his wise men finally came up with the best gift they could offer him—two of Baccio and Bianca’s kittens. The two cats had been the most wondrous gift they had ever received, and they wanted to give the rival merchant the same gift. As the rival merchant sails for home, he realizes that to receive joy you must bestow it on others and vows to learn to be more kind and generous. Ah, the magic of cats at work! We recommend you read these tales out loud to your own cat—and remember to remind her that she’s just as magical as these feline heroes!

THE CATS OF EGYPT

Photographer Kristin Reimer captures some of the stray and feral cats who populate the streets of Egypt in the photos above, in an homage to a time when cats were revered and worshipped. “Cats in modern Egypt may not hold the same status as their ancestors,” she says, “but they can still be found enjoying lives of pleasure.” The project spanned three trips and extended from Cairo to Alexandria to Siwa Oasis on the Egypt-Libya border to Bubastis, the ancient site of worship dedicated to the cat goddess Bast, where Reimer found “a single cat enjoying the digs.” Follow Kristin Reimer on Instagram @photomuse_kristin.