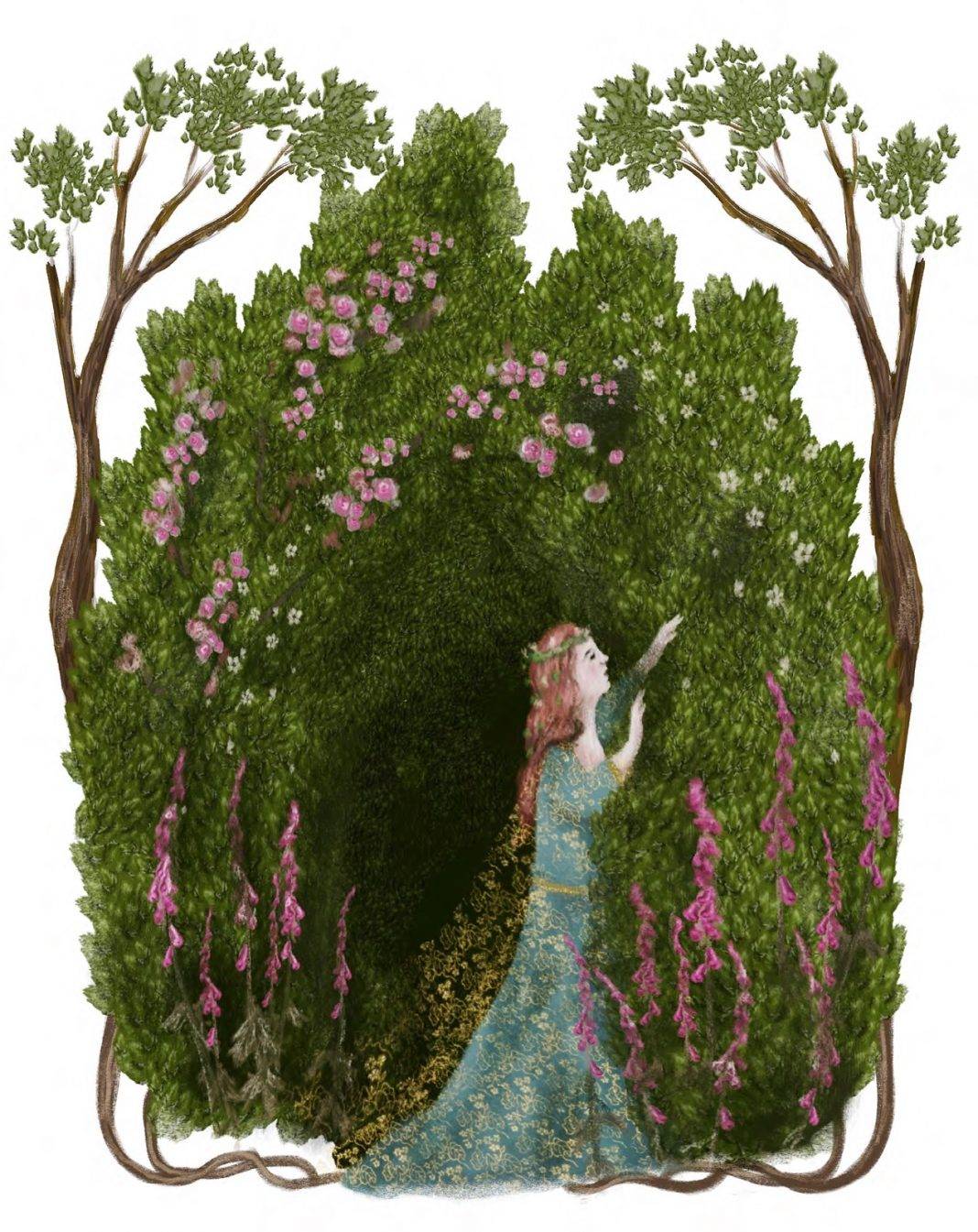 You watch from the forest path as she emerges from the heavy oak door of her cottage and ventures straight into the woods, ignoring pathways and deer trails. You follow, careful not to make any noise but still fumbling like the princess that you are, unaccustomed to going on noble quests through the witch’s woods or really going anywhere. If she turns to look behind her, you duck down in the bracken. Riveted, you watch as she walks forward, avoiding stumps, tree roots. She knows this forest like the back of her hand. Occasionally she exclaims as she finds a new mushroom or lichen, flower, or herb. She nestles leaves and roots, stems and pebbles into her basket like a mother tucking in her children at night and whispers to each one. “You are for healing, to stop a stomach from souring.” “You are for rage, to stop a heart from beating.” When she runs out of room in her basket, she slips leaves and mushrooms into her hair, still speaking to each one. Soon she wears a crown of four-leaf clovers, of deadly pale mushrooms, of twigs.

Suddenly you realize you’ve become so engrossed in watching her that you’ve lost track of the path. Several days ago, you never would have dreamed you would be here—that is, before a woman in a ragged cloak had appeared in the palace and cursed your “one true love.” At least that’s what your parents and his parents had called him when they arranged your union, though you wondered if your true love should really be as rude and selfish as he seemed to be. Only a vial of sunlight brought back from the top of the forbidden mountain would restore the vain princeling to his true form, she said, and rid him of his new fangs and curled horns. No one seemed to know what to do, so you rolled up your sleeves, gathered a bag of provisions and a map of the kingdom, and found yourself in the middle of these woods … with no idea where you are.

You could stumble along through the forest, trying to find your way back to the packed earth and pebble of the rarely traversed path (few venture into this forest anymore, you know). Or you could summon your courage and ask the witch for help. The childhood stories once recited by your nursemaid and still whispered in castle hall and tavern alike tell of the witch in these woods, with her pointy teeth and penchant for turning men into toads. But her smile as she touches a nearby fern, letting its feathery frond slip through her fingers, seems smooth and white and gleaming. Besides … you suspect that she is well aware you are following her.

You wait until she steps into a clearing filled with birdsong and wildflowers to approach her, hiding a dagger in your hand just in case. She looks up, unsurprised.

“Are you the witch of the wood?” you ask. She nods, slightly wary, chanterelles bobbing from her riotous curls.

“You are so much younger than the witches in the storybooks!” you exclaim before you can help yourself.

“Am I, then?” she whispers and a cackle bursts forth from her, somehow simultaneously raspy and bubbling, precisely the sound your nursemaid would make when telling the oldest tales by the fire. You see the creases wrinkle by her eyes as she laughs, and you wonder just how old or young she truly might be. You begin to question everything.

Smiling a sideways smile, she tucks a clover into her hair, gathering a few flowers from the meadow to add to her collected harvest. “Come on, then,” she calls to you, already moving away down the invisible path. “I haven’t got all day.”

After a moment’s hesitation, you follow. As she walks through the opening in a fence made not of bones but reeds and sticks, cunningly carved animals topping each post instead of the skulls you expected, she lets out a sudden yip that startles you into dropping the dagger you didn’t realize you were still holding. As you bend to pick it up, the earth to the right of your feet seems to rumble and move, until you realize that the shifting mound of moss and tiny white flowers is actually a miniature fox, the size of a small cat. He shakes his green fur and the flowers remain against his spine, growing among the peat. With a stretch and a yawn, he glances at you before trotting after the witch. Jaw agape, you follow.

Within the boundaries of the fence, surrounding the stone cottage, is a wild garden, filled with the heady hum of bumblebees. The aroma of classical blooms mingles with the musky and earthy scents of flowers unusual for a village garden—herbs and plants meant to heal or harm in equal measure. It is a beautiful garden, and a dangerous one. As you stare intensely at a dark bruise-colored bloom, it turns its head and bows, causing you to speed your steps.

She stops at the carved door painted the color of an overripe plum and runs her boots along the bristles of a shoe brush bracketed to the stones near her feet. “Tidy and clean,” she mutters as she pushes open the door and disappears inside, the fox leaping after her. “Are you coming?” You brush your boots too before entering.

The cottage interior beams with warm golden light. Dried herbs hang from rafters overhead, giving the appearance of a forest of fragile blooms. A cavernous fireplace with a heavy iron kettle briefly reminds you of a story where two children find a witch’s cottage made of candy, and for a moment your skin prickles, but you dismiss the thought, your curiosity stronger than any fear. In fact, if you had to put names to the emotions you feel, they would be wonder and excitement.

The moss fox brushes by your legs and twists into a tight curlicue on a soft velvet cushion bathed in light from one of the many windows. You walk over beside him and kneel, reaching out a hand to stroke the edge of his back, careful not to disturb the blooms along his spine. He opens one eye, peering at you before yawning and rolling over to expose his soft green belly. The small white flowers on his back rub against the velvet, and the resulting aroma lulls you into a peacefulness as calming as his rumbling purr. Your eyes droop.

“Well, what shall it be then?” the witch asks, startling you. “P-pardon?”
“Do you seek the tail feather of a phoenix to restore warmth

and life to your kingdom? Iron boots to help you climb a glass mountain and rescue your dear sister? A vial of sunlight to restore your lover’s true form? What shall it be?”

You haven’t actually forgotten why you left on this journey. You know the answer, and yet, somehow, it doesn’t quite matter now. It’s a quest that belonged to another girl, one you left behind in the forest. Besides, your true love’s horns rather suit him, really …

“Where does he come from?” you ask instead.
She pauses in her sorting of foraged mycelium. “Who?”
“The fox. Why does he have herbs on his back? And what will you do with the things you gathered from the forest today?” Laughing, she says, “Wouldn’t you rather know about the vial of sunlight?”

“I would rather just stay here and learn more about the wonders you know,” you say, to your own surprise. “I’m sure the king can find someone else to brave the journey. Please, will you teach me?” The corners of her lips turn up slightly in response. There are many fairy tales in which the brave young heroine encounters a witch in the forest. Sometimes the witch entices her to stay, and it is only when some small detail breaks the spell of enchantment that the girl remembers her true goal and escapes. You now suspect that all these stories were written by men, and certainly by those who have never learned magic.

Someday there will be a morning when you stretch and wake from your bed. The forest fox who sleeps curled up at your feet will barely stir as you rise before the sun, grabbing a basket to head into the woods.

In a clearing, a handsome young man will step from the forest’s edge and ask you if you are the witch of the woods. He will not recognize you at all. Not with the twigs strewn through your long hair. Besides, he had only ever known you for a few days and clearly never paid attention to anyone but himself. Your lips turn up in a smile as you realize you were right: The king had found someone to complete the quest after all.

After a long moment, a laugh will burst from you, breaking the tense silence. You really must work on your cackle.