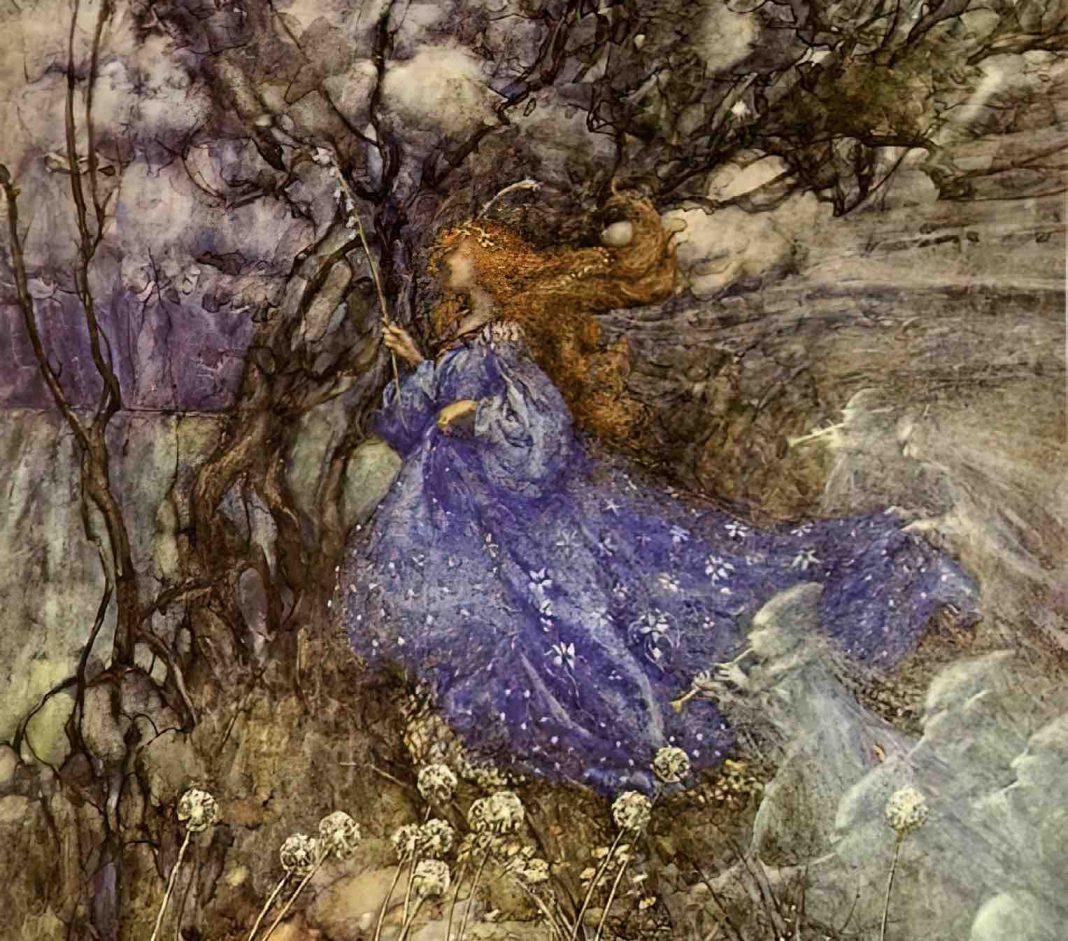 Once upon a time, in a land hidden deep within an enchanted forest where the trees grew almost as tall as mountains, there lived a girl whose eyes had long ago grown dark by disease. The other villagers took pity on her, as she could not see the moss that clung to the trees nor the puffs of cottonwood that floated like fairy clouds on a summer breeze. She could not see the snow that sugarcoated the trees in winter nor the stars that twinkled on a clear, crisp night. When they passed her sitting near the open window of her cottage, they clucked their tongues and shook their heads. “How sad, indeed,” they whispered to one another.

But the girl always smiled to herself when they passed. Little did they know that her other senses were far more acute than any of their own. She could hear their whispering and feel the pity in their words. It was the villagers, she knew, who should feel sorrow for themselves, since none of them understood the cool gratification of a bed of moss on a hot summer day, nor the subtle, sweet fragrance released by the cottonwood when the rain hit its swollen buds in spring. They never stopped talking long enough to relish the sound of complete silence after the snow had fallen, nor the crackle of a star that burned too bright.

The girl also knew that the villagers were not aware of the spirits who shared the forest that surrounded their homes. As they spun their wool or turned the soil in their gardens, they paid no bother to the sweet songs of the dryads who occupied the old-growth trees. As they pushed their carts to market, they ignored the chittering of fairies within the hedgerows. And as the villagers crawled into their beds when the moon rose high above the trees, the tinkling of bells and laughter of the woodland spirits who reveled throughout the night were blocked by the villagers’ own mundane thoughts. But the girl knew of them. In fact, she knew most of the spirits by name—all but the one who mournfully played the flute and smelled so sweetly of violets.

The woodland spirit who played her flute among the violets that subtly brightened the shady nooks of spring was as shy as the flower she possessed. She was not as statuesque as the dryads who occupied the trees, nor was she as delicate as the fairies who took up residence in the hedgerows. She did not have the agility of the sylphs who took to the breeze every chance they could, nor did she possess the confidence of the undines who rose as warriors from their watery homes. She was just a woodland spirit who guarded the tiny purple flowers that grew in quiet places where sunlight barely penetrated and moss coated everything. And in the shadows, she would sigh, knowing she was nothing special.

But still, every morning, the woodland spirit crept from her shady nook, trailing the sweet, lovely scent of violets behind her, to spy on the girl who sat near the open window of her cottage. She watched as the girl sipped her tea and wished she had the courage to say hello. The woodland spirit thought the girl to be the most beautiful creature she had ever seen—too beautiful to ever fall for such a plain and simple spirit. She would spy upon her secret love until her heart ached and lavender tears tinted her cheeks. That was when the girl at the window would sniff the air and turn, and the woodland spirit would quickly retreat to her shady corner and curse herself for her cowardice.

The girl at the window was curious about the violet-scented being she sometimes felt in her presence. She would wait for it with a cup of tea every morning as the sun brushed warm fingers across her face. The violet scent was always so intoxicating it made her heart race. But just as the girl turned to acknowledge the spirit, it’d be gone. As this pattern continued, her disappointment felt too much to bear, and as the girl wiped her tear-stained cheeks, she knew it must be her blindness that chased the spirit away.

This misunderstanding continued for years between the girl and the woodland spirit. Both believed themselves not whole enough to be loved by another. But one night, after awakening from a dream where the girl clearly saw a beautiful female woodland spirit hand her a violet from a shady corner of the wood, she sat up and clutched her heart. She knew that this was the one she had sensed in her midst for so many years; this was her true love. It had been told to her, as a child, that dreaming of violets indicated a transition in one’s life. So the girl got out of bed and put on her shoes, because she realized it was time to face her fear of rejection. If she didn’t do it right then and there, nothing would ever change.

The girl was as familiar with the forest as she was with the layout of her own cottage. She had wandered the trails where the conifers guarded the forest’s secrets and the cottonwood shaded the streams since she was child. She knew every lump, rock, and divot, and every twist and turn. And as came to the spot where the scent of violets was strongest, she stopped and turned toward the source of the sweet smell.

The woodland spirit was shocked to find her true love standing in front of her on a night when the moon was just a sliver and the stars hid under cloud cover. She shrunk back into the foliage, hoping the girl did not see her with moss tangled in her hair and smudges of dirt on her cheeks.

“I know you’re there,” the girl said into the darkness. “Why do you spy on me daily only to rush away when I turn to speak? It seems you take pleasure in my torment. Is it to mock my blindness?”

The woodland spirit was shaken by the girl’s comment. She raised her hand and slowly waved it front of the girl, as she had not realized the girl was unable to see. “I did not mean to offend you,” the woodland spirit said, her voice timid and small. “I only meant to admire you from afar. As I never dreamed that such a beautiful creature could ever love something as plain and simple as me.”

The girl reached out her hand. “I may not see with my eyes,” she said. “But my heart knows true beauty. My heart knows what love is.”

In the months that followed, the villagers who passed the girl’s cottage on their way to market spoke to one another of the absence of smoke from the chimney and shook their heads in disapproval at the weeds that had invaded her tiny garden. But no one bothered to check on her and soon, even they forgot about the girl who saw with her heart.

As for the girl and the woodland spirit? Well, it is said that the violets that grew in tiny clumps in the shadiest nooks of the forest had spread throughout the kingdom and that their scent had been rumored to evoke the sweetest dreams of two beautiful girls walking hand and hand across a forest dotted with tiny purple stars.

Wood violets (Viola odorata) cover the forest floor with bursts of purple light to ease our hearts and lend assurance of spring’s return. These tiny woodland flowers grow in clumps that spread both by their roots and by seed, quickly carpeting those shady, moist areas where other plants refuse to grow.

In ancient times, they were considered flowers of change and transition, of the cycle of life, death, and rebirth that is demonstrated wonderfully in the story of Persephone. She was the daughter of Demeter and the goddess of spring, who was picking wild violets when she was taken by Hades into the underworld. Her fate was sealed after she was convinced by her captor to eat the seeds of a pomegranate. She was then forced to remain in the underworld for half of the year, leaving her mother to mourn and the earth to shrivel until her return every spring.

The medieval world saw violets as representing new love and faithfulness. They were sometimes used as charms against the evil eye. In the Victorian language of flowers, if you were given a gift of blue violets, it was said to represent constancy. Yellow depicted modest worth, and white violets invite the recipient to take a chance on happiness. Victorians also laid small bunches of the flower on the graves of their children. This is one reason violets are sometimes called heartsease.

The term shrinking violet to describe someone who is shy was first used as a poetic expression to describe the small woodland plant, as their stems point downward, causing their blossoms to look as if they are shrinking away from view. There is nothing shy about the wood violet’s scent though. Lord Byron described it best: “The sweetness of the violet’s deep blue eyes, kissed by the breath of heaven.” Yes, their lovely, sweet fragrance is unforgettable, and both the blossoms and the leaves have been used in perfume and beauty products since ancient times. An old Scottish poem collected in the 18th century suggests violets as a method to increase a woman’s beauty and charm potential lovers: “Anoint thy face with goat’s milk in which violets have been infused, and there is not a young prince upon earth who would not be charmed with thy beauty.”

Violets have also been used in sweet and savory dishes, and are rich in vitamins A and C. Collecting wood-violet blossoms has become a favorite springtime tradition for many of us who like to add the candied blossoms to baked sweets or make the fanciful blue syrup to add to tea or favorite recipes. According to folklore, when picking violets, it’s best to gather a handful or more because bringing a single blossom into your home is bad luck. Folklore also claims that dreaming of violets indicates change in one’s life, putting violets under your pillow will enhance prophetic dreams, and—my favorite—leaving violets and a bowl of milk outside your door serves as a blessing of the fae.

To Dream of a Fairy-Tale Lover

A dream pillow made with violets is said to bring visions of a fairy-tale lover.

Mix all ingredients together in a large bowl while saying this:
I call upon the secrets that the fairies hold
To sweeten my dreams with a love that
I’m told Is waiting for me beyond the veil of night
And fill my sleeping with visions of delight

Fill the drawstring bag with your dream mix and tuck under your pillow or lay on your nightstand. To sweeten the experience even more, try this tea blend before bedtime: