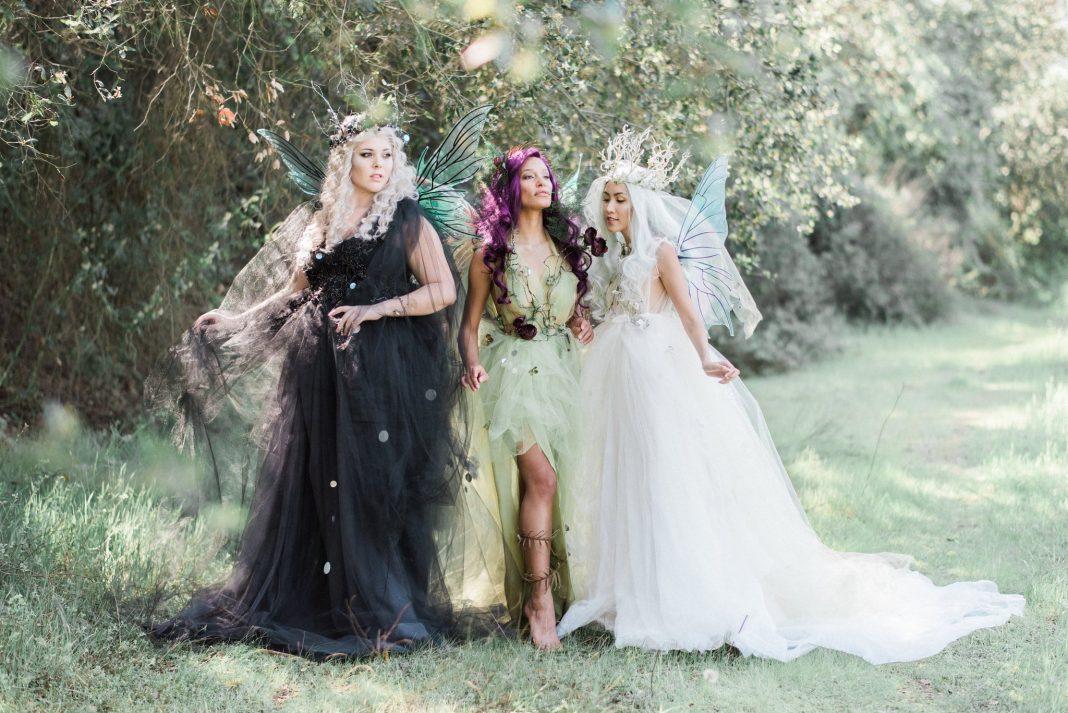 In a flash of light, Titania’s court arrives, all berry-stained lips and shimmering wings. Their gowns are gossamer and diaphanous, their eyelids drooping languidly in the dreamtime of a thick summer afternoon. Queen Titania herself leads them in merry revels. Tall and elegant, she displays a natural royalty no etiquette teacher could inspire.

JoEllen Elam Conway, perhaps better known by her company name, Firefly Path, had the honor of garbing this midsummer troupe of royal fairies. On the day the court came together for their portraits, they agreed to gather in the green space behind Firefly Path’s Los Angeles studio. Studio owner Ben anticipated their arrival with delectable hors d’oeuvres he spent a week planning and preparing (the fairies adored the mini apple galettes, smoked salmon rugelach, celery barquettes with stilton and walnuts, and mini deviled crab cakes!) while assistant Zach created a list of musical selections themed around the day to set the mood for the entire courtly visit. Each of the six enchantresses, all of whom have inspired countless poets and artists to compose numerous ballads and works of art in their honor, was meticulously coiffed and adorned: captured in portraits, separately and together.

Set designer Make Light Studios was delighted to find that the rain sprites had been unusually enthusiastic this year, gifting them with thick moss and unearthing stones on a grassy bank in a nearby nature preserve. She and Elam Conway used the stones and moss, along with fairy mushrooms, to form a wild spiral where the fairies, natural dancers, would not be able to resist the urge to flutter their wings in a frolic. After the individual portraits were finished, the fairies were brought to this second location, and their squeals of delight confused and bespelled any humans walking near the meadow where they danced. It is to our great relief that none of these humans decided to join

Here are a few behind-the-scenes photos from our cover shoot.