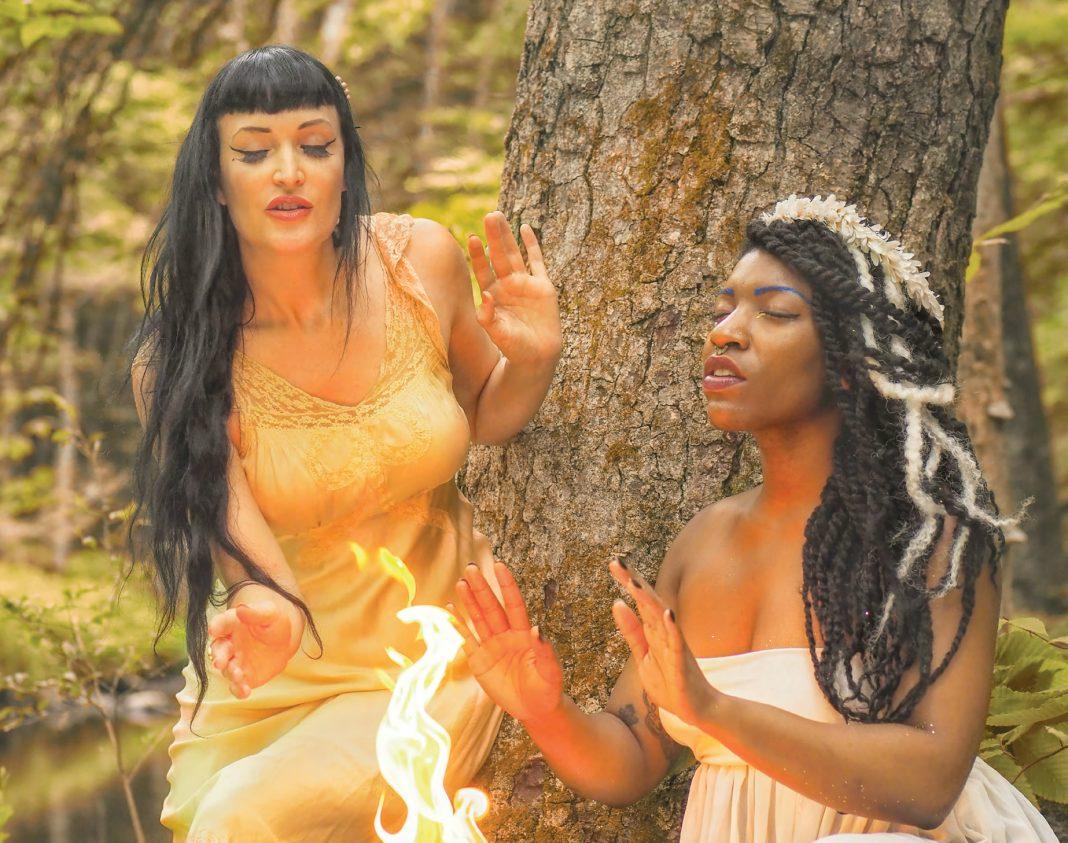 Like the women of Practical Magic , Veronica Varlow (opposite, left) had a powerful, glamorous witch in her life, teaching her magic since the time she was a small child—her Romani grandmother, Helen, whose mother came from Czechoslovakia to the U.S. in the early 1920s and passed down a whole magical tradition. But Helen never called herself a witch, and she never called what she did magic. “All the things she taught me were what she and her mother and her mother’s mother did naturally,” Varlow says. “She taught me to work with candles, to do tarot with playing cards, to speak with spirits. She’d just stand in the kitchen singing, carving a candle.”

According to Varlow, Grandma Helen had hair like Marilyn Monroe, was a mesmerizing storyteller, and had a wondrous, infectious laugh. Everyone wanted to be around her. Women from the neighborhood would gather in her kitchen—Helen played a mean game of bridge, Varlow says—and would casually ask Helen to read their cards for them. “Her friends just knew that she could throw down the future for them if she wanted. Play cards, have some tea, see the future. She treated the world as an enchanted place and it’s why they, and I, loved her so much.”

Once, during a period when Varlow was getting teased in school for her buckteeth and hunching, Helen took her out to the lagoon behind her Florida house and began brushing Varlow’s fine golden hair as the two talked. After a while, Helen pulled a clump of golden hair from the brush and placed a corner of it under a rock. When a bird flitted down and started picking at the hair, Helen moved the rock. Another bird came down, and the two creatures made off with the gleaming strands to build their nest. Helen looked to Varlow and said, “A whole generation of baby birds will grow up singing in your hair.” After, the teasing didn’t bother Varlow as much as it did before. “She made me see myself as a magical creature,” Varlow says. 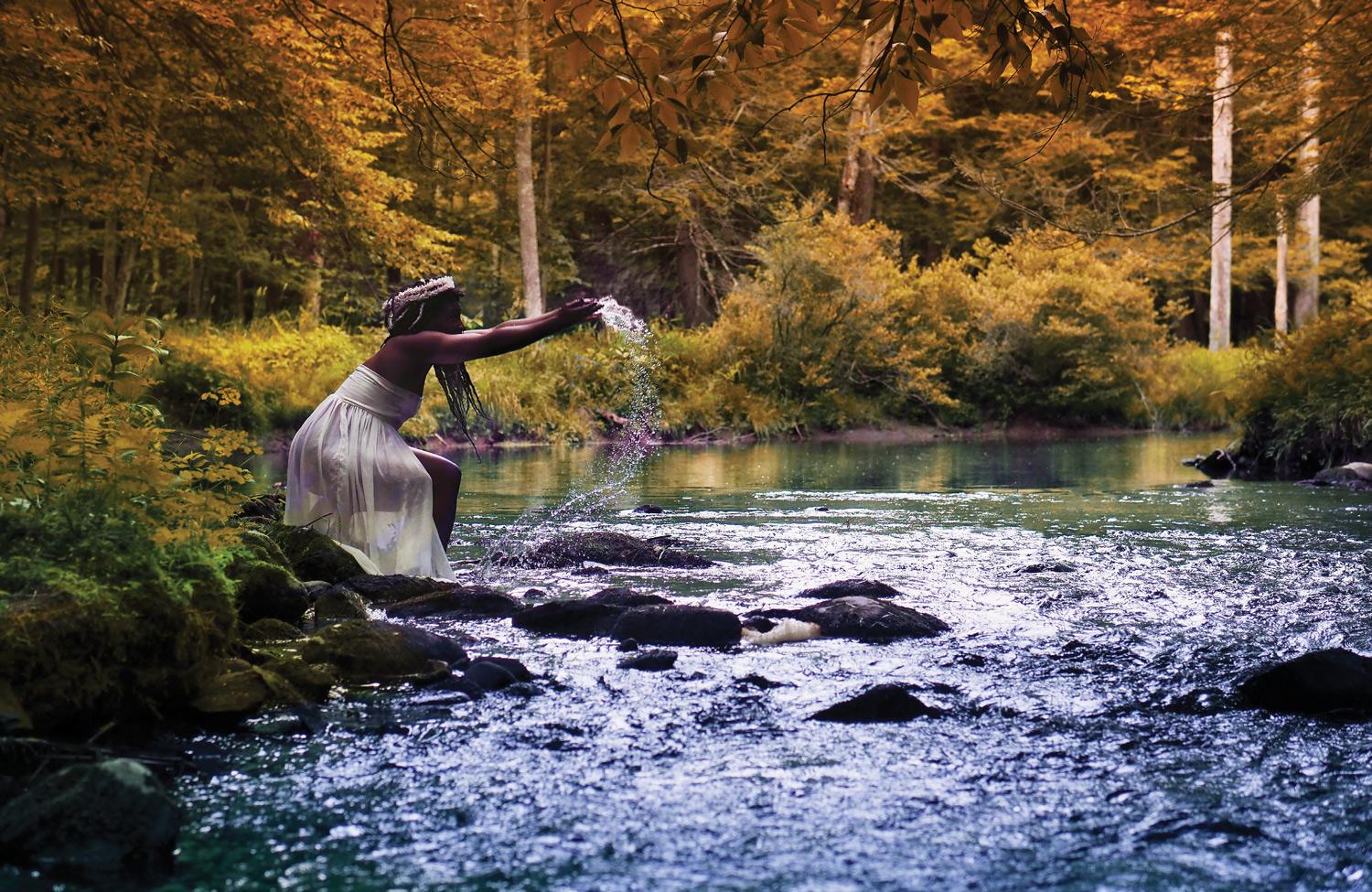 Helen died when Varlow was twelve, but she continues to be a dominant force in her life. It wasn’t until Varlow was fifteen that a friend told her that Helen had been a witch. “She was not!” Varlow responded, horrified, and explained that her grandmother had carved candles and rubbed them with oil, talked with spirits, stuff like that, but of course had not been a witch. “Dude, that’s witchcraft,” her friend explained. That same friend gave Varlow her first book about witches; in it, Varlow saw similarities to her grandmother’s practices but not exact matches. Taking the traditions that her grandmother taught her, she started doing spells of her own with the same friend, working with tea lights and glitter in the local park, braiding ribbons representing wishes into each other’s hair and chanting (after another of Helen’s practices). “Other kids got into drugs,” she says now. “I got deeper and deeper into magic.”

Today Varlow honors the teachings of her Grandma Helen and proudly claims the power of the word witch—and, through numerous workshops and classes, teaches others to “incorporate ceremony and ritual and enchantment into everyday life, and to make every day an adventure and a story.” She even hosts five-day “witch camps” at Magic House (her spell-filled house you can read about on page 64) that are like summer camps for grownups, but with magic woven throughout. You can see why we thought of Varlow immediately for the cover of our Practical Magic issue, and since sisterhood is at the heart of the Alice Hoffman books and witchiness generally, she suggested her “witch sister” Sage Sovereign (opposite, right), with whom she performs frequently in the New York burlesque scene and who is, Varlow says, “an otherworldly goddess when she performs. The Queen. Capital T,  capital Q.  You are in the presence of the divine feminine when you see Sage perform.” Of Varlow, Sovereign says, “Veronica really is my fire and magic sister.”

Like Varlow, Sovereign also came from a family with a magical (and card-loving) grandmother, one who spoke with ancestors in dreams and whom the neighbors sought out for emotional counsel—and who made the world enchanted for her granddaughter. “I spent so much time in the kitchen with my grandmother,” Sovereign says, “watching her cook, listening to her stories, and learning about what spices and herbs blended with what, and what their uses were. She wasn’t intentionally teaching me to make potions, but I used what I learned from her to go off and attempt to concoct potions that would make animals speak!” She made potions “endlessly” and spent a lot of her youth “playing with garden snakes, making up stories about the bugs and animals I encountered on my adventures, and planting seeds and cataloging their growth, or lack of,” around her grandmother’s herb gardens. 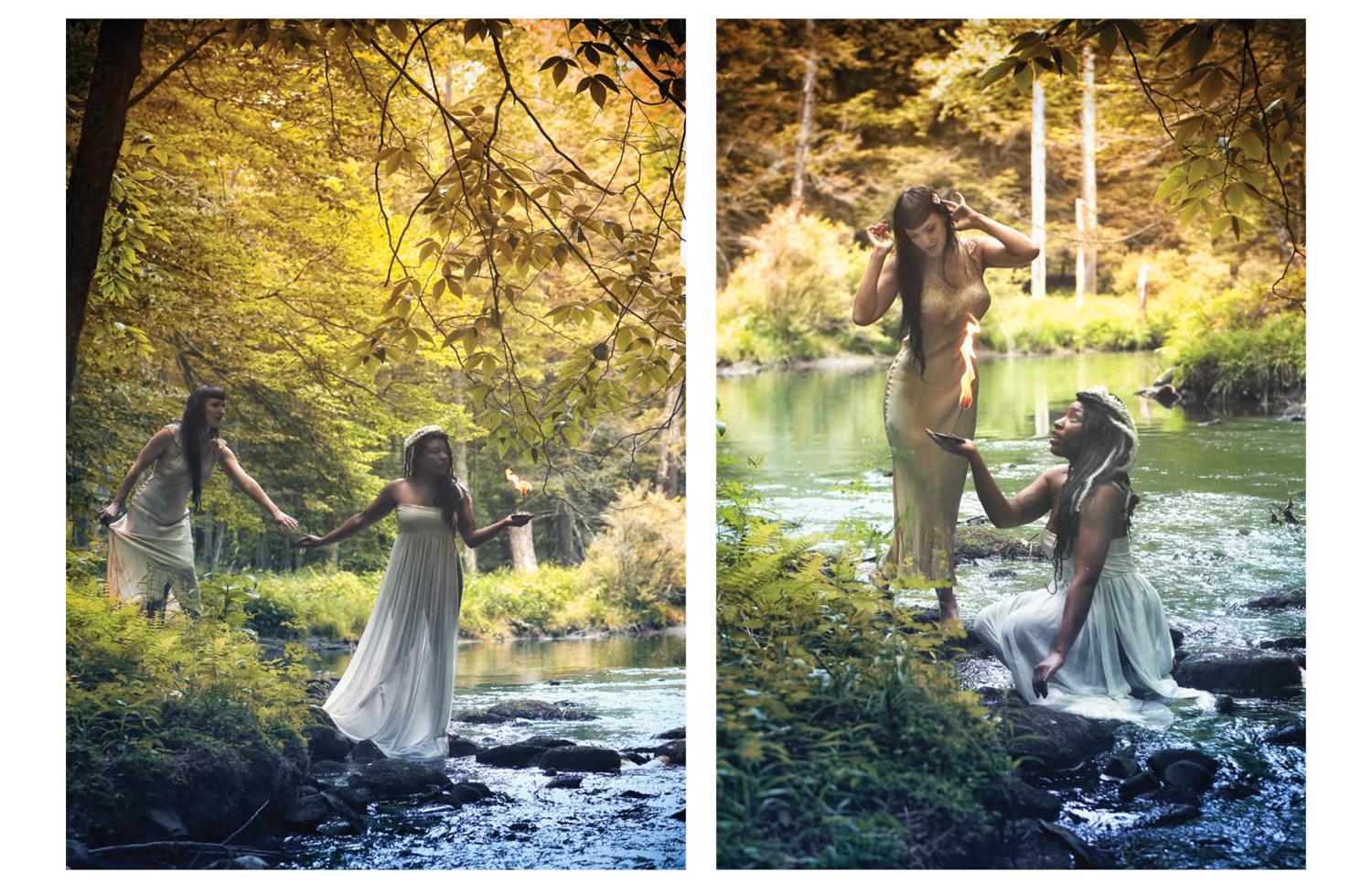 Today Sovereign is a fire performer and co-produces (with her partner Cinder) the Ignite! Fire Arts Variety Show, which focuses on different ways of performing and communicating with fire. She started working with fire after moving to New York City a few years ago, at a time when her life was in disarray and she “needed a direction.” She loves the dual nature of fire, how it’s “primal and primitive,” yet represents progress, enlightenment, and creation. “Fire can destroy completely, burning through homes, forests, and lives from one tiny spark,” she says. “But one single match, one spark, controlled, can become a source of heat and comfort, a place to cook, convene, share stories, inspire and grow ideas.” She also claimed the name witch  for herself after a dear friend gave her a cauldron, telling her that spiritual depth and wisdom make a strong witch, more than knowing “every tarot deck and every stone.” She was able to own the word after that: “I will never forget how important that conversation and the moment was for me,” she says.

For the cover shoot with Steve Parke, held in the woods near Varlow’s Magic House, Sovereign brought along all manner of fire accouterments, many of which she built herself—as well as fire safety blankets, a necessity. She also had a sparkly dust made from charcoal, lycopodium powder, and metal flakes, which she flicked into the flames, causing a spray of glitter and smoke to spill forth. Parke captured Sovereign’s bliss as she watched and controlled the fire, as well as the surprise and delight on Varlow’s face as the flame transformed, for that moment, into magic.