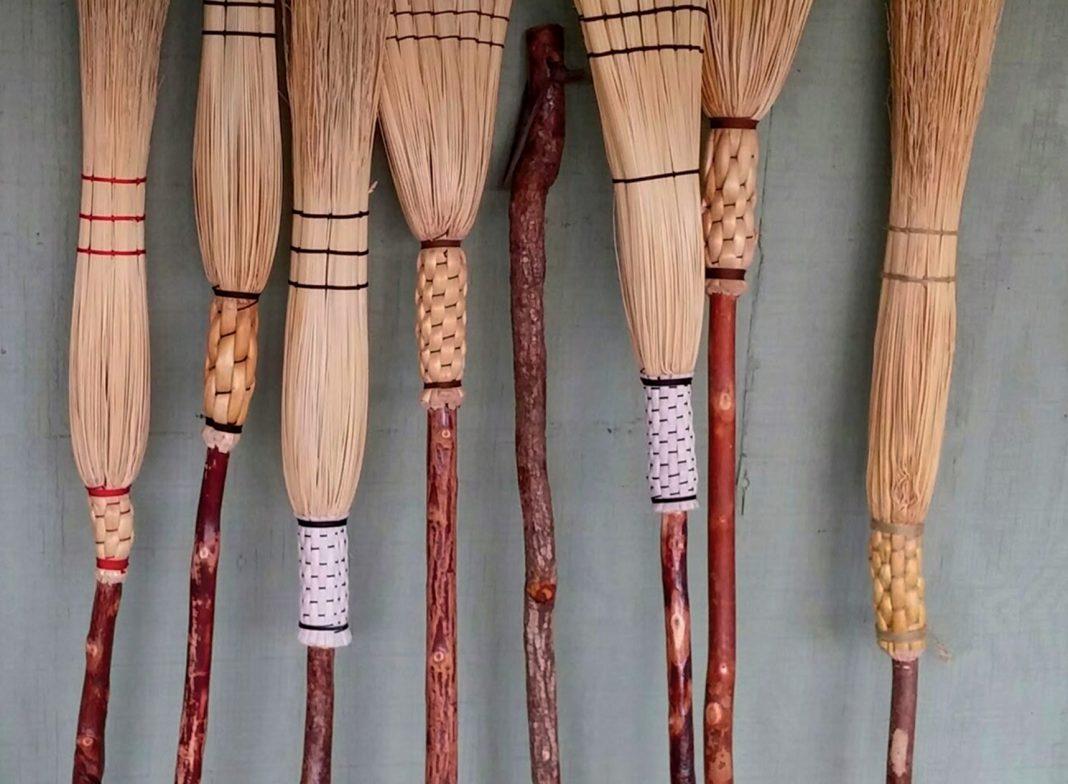 Learn how to make your own broom in the Autumn Issue

Of all the myriad stories told of witches, one of the most enchanting involves them flying through the night sky on broomsticks. The silhouette of a witch against the moon, her cat daintily seated behind her, is one of the deepest of archetypal images. Once, her flying visage struck terror in the hearts of certain gruff men who claimed to be god-fearing, but today she more likely conjures romantic thoughts for men and women alike. She embodies the dreaminess of Miss Eglantine Price, the last midnights of Into the Woods, the wise merriment of Granny Weatherwax and Nanny Og, and the idealistic beauty (and wit) of Samantha Stevens. Likewise, if you have made up your mind to be a witch, you’d best have a broomstick. Charlotte Baker, the enchantress and artisan behind Nightshade Handmade, can help with that.

Baker, who by day works at a botanical garden, makes exquisite jewelry and brooms in her off hours. She lives in LaGrange, Georgia, with her husband Jake, their children, and assorted pets, surrounded by a natural world that inspires her craft.

I ask her how she became, as she calls it, a “broomsquire.” “A friend purchased a beautiful handmade broom, a flat sweeper, while on vacation in the Smoky Mountains, and I was captivated by it. I thought it was the most cunning and clever thing I’d ever seen. I was determined to learn how it was made,” she says. The inspiration lead her on a merry quest.

“I became enchanted by my friend’s broom in the early 1990s, before the internet was widespread, and information was scarce. My local library located an early 20th century pamphlet about growing broomcorn and making brooms, but it described the process by which commercial brooms were made, using machinery. Further searching led to a chapter on broom-making in one of the Foxfire books. There were no illustrations, just a description of how to bind the broomcorn onto the handle tightly enough that it would not come apart, using body tension, and how to stitch the brush. It didn’t make a lot of sense to me at the time.

“Several years later, my friend was moving to a new house and was reluctant to take the broom with her, because of
the superstition about bad luck and negativity from the past hitchhiking from the old house to the new in the broom. I’m not as superstitious as she is, so when she offered the broom to me, I didn’t hesitate to take it. I studied it closely, trying to figure out how it was bound and how the stitching that gave it its shape was done. I couldn’t even tell where the stitching began and ended, it was so skillfully made!

“I used it as a porch broom and kept it hanging by the front door. My cat used it as a scratching post and eventually frayed the stitching so badly that it began to come apart. I saw it as the perfect opportunity to reverse-engineer the broom, to see exactly how it was put together. I took it apart slowly and carefully, observing the way the stitching twine crossed through the fibers, then how the broomcorn was bound to the handle, and how the twine was attached to the handle. I had a major a-ha moment, as the things I hadn’t understood in the Foxfire book just clicked into place now that I had the visual to go with the words. I ordered myself some broomcorn (Sorghum vulgare) seeds before the end of the day. The next spring, I planted several rows of broomcorn. I made my first broom the following autumn, using the handle from my friend’s broom. It was not a complete failure, but it was not bound tightly enough to make it functional.”

Delighted by the experience, Baker continued to discover broom styles she wanted to make. “I loved how each broom I made had its own distinct character and feel. Also, I was constantly finding sticks that would make beautiful broom handles.” 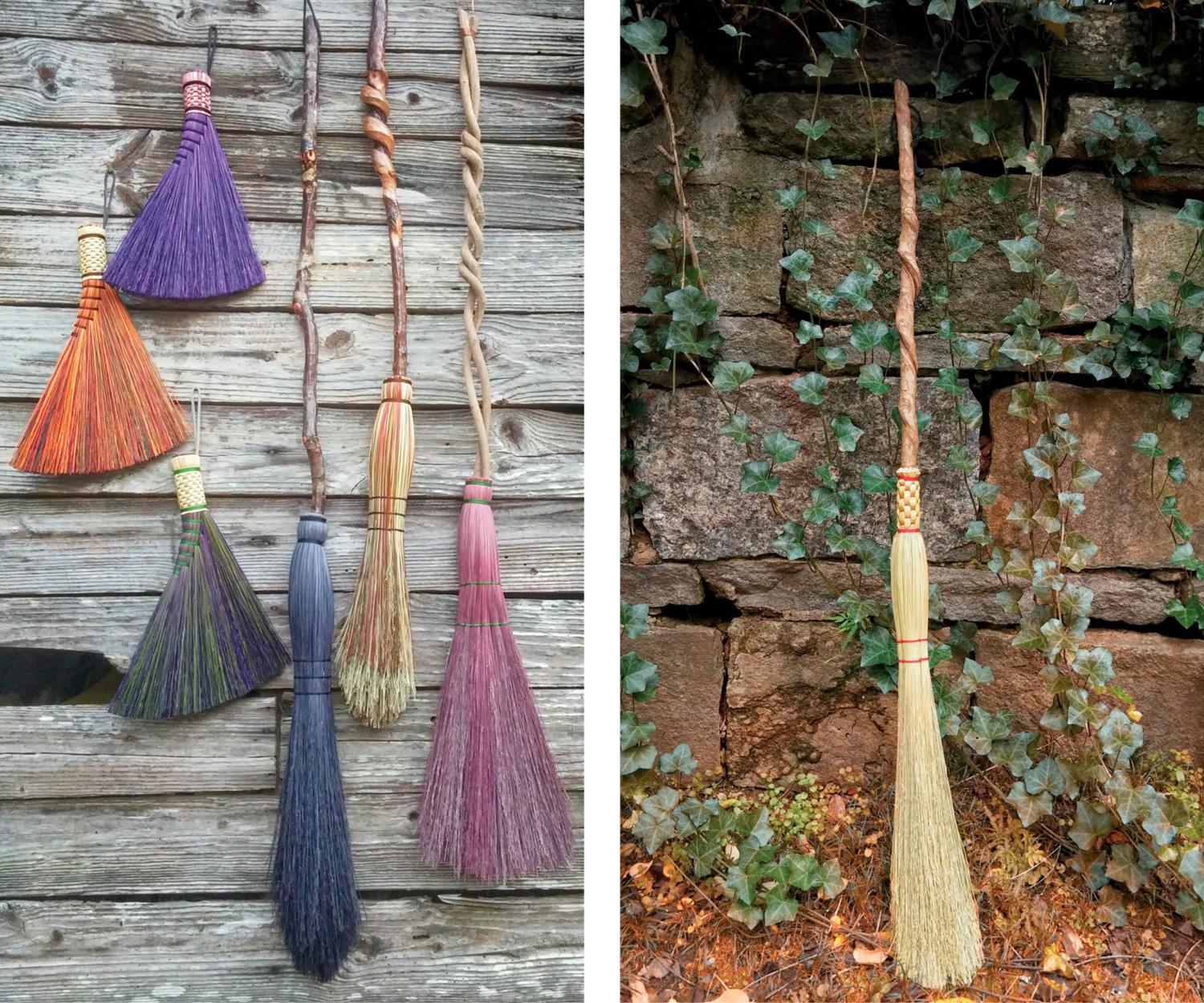 She began giving her brooms as gifts, especially for housewarmings. Guests in the homes saw them, inquired, and soon Baker was selling her work. Making a wedding broom for some friends who wanted to jump the broom in the ceremony produced even more custom requests.

What is meaningful to you these days about the crafting of a broom?
I ask. “It’s the preservation and continuation of a nearly lost art. There are only about 150 broom makers in the country—we’re all on an internet forum, so we basically all know each other—and not all of them make their brooms entirely by hand. “I love coaxing the personality out of an interesting piece of wood I’ve found and adding a broom to it to create a  piece of art that’s also a functional tool. A handmade broom is the perfect blend of form and function. When I make a commissioned broom, I strive to personalize it by using twine in the recipient’s favorite color and using a handle that seems to fit his or her personality. The simple act of creating art with my own hands is profoundly satisfying and meaningful.”

There’s a magical significance to Baker’s brooms. She says, “In some modern witchcraft traditions, brooms are used to purify ritual space, by sweeping it clear of negativity. That’s sympathetic magic in its purest form.” Brooms can be used more aggressively in banishing rituals.“More,” she continues, “the purifying property of brooms makes them useful as barriers when placed beside or over a doorway. The broom prevents negative energy from passing through the door … A broom is dipped in water, then shaken vigorously overhead to simulate a rain shower, in an old Southern hoodoo rain-summoning spell … and, of course, a witch can fly his or her broom to the Sabbat.”

For Baker, the esoteric history of broom lore is part of what drew her to the process to begin with. She’ll also construct you a ritual broom, perhaps made of wood with magical implication, like oak, ash, or willow, bound in air-element-colored twine— white, blue, or gray. A ritual broom she’ll make in a waning moon, a wedding broom in a waxing one.

“I hold a mantra in my mind for all of the hands-on parts of the creation process—usually a neutral chant such as Earth my body, Water my blood, Air my breath, Fire my spirit.”

Why, I ask her, do broomsticks have such archetypal appeal?
“Broomsticks represent the autonomous woman who refused to conform and behave according to rigid societal expectations. Medieval witch hunters planted the seed that grew into modern pop-culture depictions of witches, by perverting a traditionally feminine household implement into a tool for diabolical mischief. Imagine: A woman who doesn’t stay at home, being obediently domestic, who uses her broom to fly off into the night! Rebellious, non-obedient women have always been a threat to the status quo and remain so to this day.”

To buy one of Baker’s exquisite creations, visit her Etsy shop, NightshadeHandmade; contact her via Facebook at NightshadeArts or on Instagram @nightshade_handmade. Baker also designs and makes nature-inspired jewelry with a mystical flair, using sterling silver, copper, and bronze wire and gemstones; lavender wands and sachets; embellished blank books; and fabric Goddess dolls for folks of all ages. 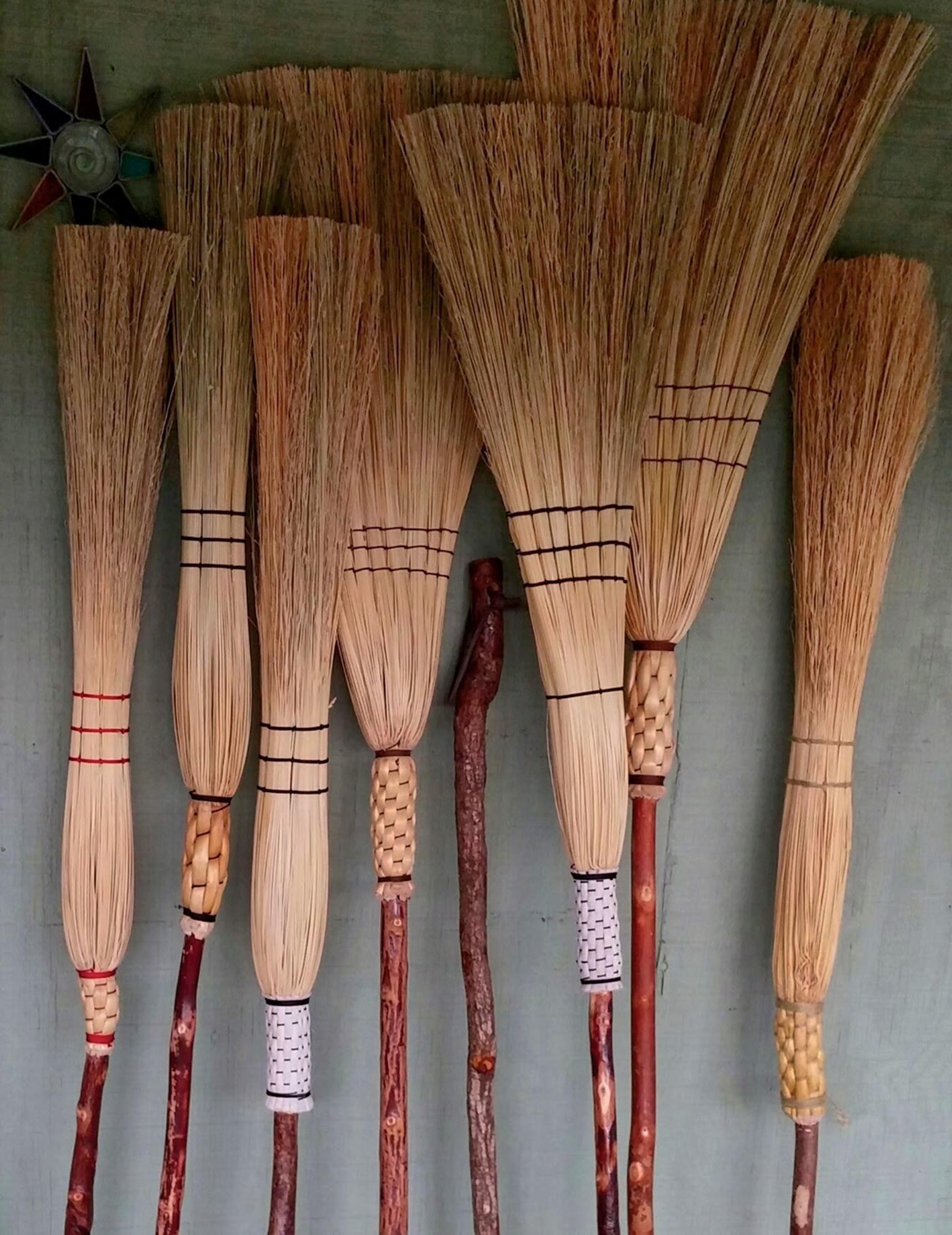 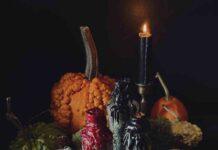 Craft Your Own Magical Jars 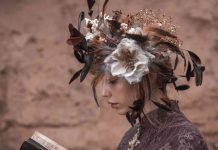 A Book of Things Received