There are souls whose hearts beat out an unkept rhythm that can’t help but keep them on the margins of our ordinary world. She was one of those wild souls—the young lady in the park who spied dragons in the clouds as her peers organized baseball games. She was the one who spent more time reading fairy tales than studying her algebra, and the one who would rather hold a conversation with a nature spirit than with most people she knew.

It was her grandfather who told her of the ones who teeter between this world and the other—the ones who have honed their intuitive skills and can journey beyond the veil to gain insight from their animal spirit guides.

“But I don’t have a guide,” she said, disappointment pulling at the corners of her eyes. “Aww, but you do, my girl,” he replied. “You just need to let your animal find you.”

She thought for days about who her animal guide may be. “Is it you?” she asked a raven who squawked madly from its post on top of the mailbox. “I will call you Merlin, and you could ride on my shoulder and whisper to me of shapeshifting and magic.”

But the raven saw something more interesting on the other side of the hedge and left her in a flurry of flapping and feathers.

When wandering down a country lane, she saw a horse nibbling on tufts of fresh spring grass. “Is it you who will be my guide and tell me of endurance and freedom as I ride upon your back with the wind on my face?”

The horse snorted and stomped, and then took off in the direction of the setting sun.

While gathering stones along the river’s edge, the girl heard the cry of an eagle who was riding a thermal along the mountainside. “Is it you, Eagle?” she asked. “Will you fly alongside me and cry out your charms of healing and rebirth?

But the eagle only soared higher and higher until it was just a speck along the top of the ridgeline.

One day, as she picked salmonberries along the edge of a hedgerow, she heard something nibbling at a thimbleberry bush not too far from where she stood. It was a small doe who looked bashfully her way before creeping into the forest. The girl parted her lips to speak but stopped. What good would a deer be as a guide? It is a timid thing that keeps to the edge of the forest. No, she need not bother to ask the deer for anything, as it had already shied away.

But over the course of the summer, she began to see the doe every day along the edge of the hedgerow, where she knew the veil between our world and that of the spirits is thin, and then again every night as the doe slipped through the tendrils of her dreaming world.

It was her grandfather who reminded her, when she asked him what a small deer could possibly have to teach her, that all forms of life have wisdom to share—even a shy deer.

One night, when the moon was almost full and a breeze stirred the willows that shivered along the riverbank, the girl was woken by the tugging of the silvery strands that reached from her soul and drew her with a steady breath to the hedgerow. As she situated herself there at that border between the wild and the tame, she became aware of her heartbeat in rhythm with nature’s own earth beat.

“We are the same, you and I,” rode sweetly on the air. And as the girl turned to see who spoke, she saw the doe.

“We are both seen as beings on the edge, somewhere between wild and tame, this world and the other.” “Neither here nor there,” the girl said. “I sometimes don’t understand my own world and I long for the other.”

The deer nodded and said, “I can help with life’s mysteries, dear friend. If only you believe.”

Then and for the rest of her days, it was the deer spirit that helped her find that spirit child within herself who knew intimately the music of the wind that rustles the leaves before the rain. The deer taught her to hear the voices of the otherworld that whisper just beyond the silence that insulates the land after a heavy snow. And when she grew older, she remembered how it felt before she knew that too much sun could cause wrinkles and what the rain did to her hair. For she always entered nature’s bower as a child, where anything is possible if you look to nature with curiosity and wonder.

An animal spirit guide is much more than just an animal whose qualities we admire. It is the embodiment of our subconscious mind and a guide to help us acknowledge those aspects of our lives that need to be transformed, inspired, or comforted.

There are several ways to cultivate a connection with an animal spirit including: observing nature and keeping track of repetitive sightings of a specific animal, shamanic journeying, dream work, and meditation. Another way is through these Animal Spirit Meditation Beads, which can work as an aid in focusing your intention on your power animal while in a meditative state. Just touch each of these beads in repetition as you call forth your spirit guide.

Lay out your beads in a way that pleases you. String them onto your beading string and knot the string securely at both ends. 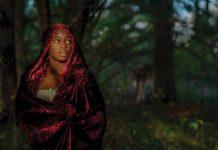